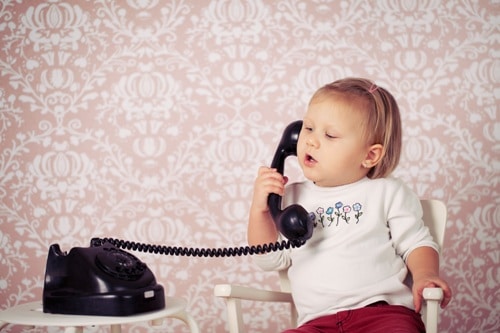 For some people, speaking on the telephone can be awkward.

When you’re still learning a language, it can be terrifying.

Nevertheless, for those living in Germany or doing business with those in the country, having to use the language on the phone is eventually unavoidable.

Whether it’s trying to get information from an agency, speaking to your distant cousin on your Handy (cell) or just practicing your verbal skills on Skype, having a conversation over the wire will eventually happen along the winding path to fluency.

To help you avoid the pitfalls of dead silence or a sudden hangup, here’s an arsenal of simple and handy sentences that will come up again and again.

But first, a few cultural notes on the German phone exchange.

In a country where formality reigns supreme, there’s a pre-existing social contract when it comes to picking up the telephone that it doesn’t hurt to be aware of. First of all, Germans tend to introduce themselves on the phone by using their last name. No “Mr.,” “Dr.” or “Sir” (in the case they might be knighted), but just their last name.

That doesn’t mean, however, that you can skip adding the Herr (Mr.) or Frau (Mrs.) when constructing your greeting.

Also, even though throwing out their surname comes across as kind of chummy, the same old Sie and du rules apply—namely, unless you know the person well or are of the same age, you must use Sie (the formal construction of “you”).  You wouldn’t want the phone call to be over before it began due to a simple faux pas.

Finally, it’s worth noting that when Germans give you their phone numbers, they usually do it in double digits. It’s probably an efficiency thing. Just something to keep in mind to sound a little bit more native.

Having trouble finding a phone number? Free online services, such as Das Telefonbuch, can be a handy way of getting what you need over the web. For further help with the logistics of using the phone in Germany, check out “How to Make a Phone Call in Germany” by Just Landed.

Now that you know the rules, it’s time to pick up that telephone.

Without further delay, here’s 20 simple sentences to get you started on being a master of the phone lines.

Literally, you’re saying, “Are you it?” This may sound like an expression of disappointment to an English speaker, but it works fine in German. While in the age of smartphones such ambiguity is less common, you never know when you’ll have to call a landline and figure out who’s on the other end. Note that this is an informal construction, best used among friends and family.

The literal response to the literal question posed above is “I am it.” This is also used when the person on the other end can recognize your voice.

For situations that call for a more formal approach to determining who is on the other end, this sentence will help pave the way for the discourse to follow.

4. Hier ist Frau Beck am Apparat. (This is Mrs. Beck on the telephone.)

The literal translation goes like this: “Here is Mrs. Beck on the telephone.” It may seem a little grandiose or pompous to speak of oneself in the third person, but you can give yourself permission to do so in German. Note that if our Frau Beck was asked “Sprech ich mit Frau Beck?” (Am I speaking with Mrs. Beck?) she could simply answer “Am Apparat” (On the telephone).

5. Ich möchte mit Herrn Karmann sprechen. (I would like to speak with Mr. Karmann.)

If the person that picks up the phone isn’t who you were hoping for, there’s no need to hang up or panic. Simply state who it is you need to speak with.

In situations where you can keep it informal, you can also keep it simple. Sounding close to its English equivalent, this is an easy one to remember.

When you hear these words, you know that you’re close to reaching your intended target. Also not a bad sentence to have in your back pocket in case your flatmate’s mother or the police call looking for her.

8. Kann ich etwas ausrichten? (Can I take a message?)

The person you’re calling may very well be out doing important things. This way you can still get to him regardless. This sentence translates in a literal sense as “Can I pass on something?”

9. Kann ich eine Nachricht hinterlassen? (Can I leave a message?)

Just to make sure you’re prepared for all scenarios, here’s another way of asking to leave a message. This time you’re actually saying “Can I leave a message behind?”

Because Nummer (number) is feminine, you have to remember it’s Meine and not Mein. Otherwise, it’s smooth sailing on this one…

Note: This is the informal version. If saying it to someone who’s your social superior, it would read like this: “Haben Sie ihre Nummer?” When needed, you can also replace ihre (her) with seine (his).

Every country has telemarketers, even Germany. This is a brief and polite way to dismiss them and anyone else that you really don’t want to talk to.

14. Er ist nicht erreichbar. (He is not available.)

We’ve all experienced the frustration of not being able to get through to the person we need to speak to. Just in case you’re wondering if that’s happening to you in German, here’s the sentence you’ll hear when you’re getting the cold shoulder.

15. Wir wurden unterbrochen. (We were cut off.)

It sounds more dramatic than it really is, which is just another reason to appreciate German. All in all, however, it’s good to let people know that you didn’t purposely hang up on them.

16. Können Sie das bitte wiederholen? (Can you repeat that, please?)

In learning a new language, this is one of the most important (and most used) sentences you can have in your arsenal. On the phone it can be particularly hard to figure out what the other person is saying. There’s no shame in asking them to say it again.

Generally, a native speaker will be understanding towards a person making an effort to speak a new tongue, and will be happy to oblige.

Typically, when you hear this sentence, it’s spoken by the automatic operator in a very woody tone. At least now you know what she’s saying. In these situations, however, it never hurts to make sure you’re dialing the number correctly. For additional information on how to call Germany from abroad, check out this site.

19. Vielen Dank für Ihre Hilfe! (Thanks a lot for your help!)

I’m sure your mama raised a polite, courteous boy or girl. Now you can express your gratitude to the person on the line for their patience with your effort to speak German on the phone.

It’s always useful to have a short, simple way to end the conversation.

Will 20 sentences be enough to complete every phone conversation in German? Not likely. But at least now you have the basics from which you can form a useful, insightful and challenging dialogue over the wire.

Having an idea of some of the social expectations and negotiating the formalities is half the battle in having a successful phone exchange in German.

Now it’s time to dial away and let the ringtone resound!

When you’re trying to effectively negotiate phone calls or any other type of social situation in a foreign language, real-life examples can be a huge help.

That’s where FluentU comes in.