Hallo may well have been the very first German word you learned.

But it can’t be the only greeting you’ll use or hear.

Even if you’re just starting out with German, it’ll be useful to have a look at these German greetings, or Grüße.

So when someone greets you with a friendly Alles klar? you won’t stare back at them in complete confusion (like I did a few times until I figured out what it meant), but can instead respond in turn with a Gut, danke!

Once you learn these and your German goodbye expressions, you’ll be off to a great start with your German conversation skills.

As mentioned above, this is one of your typical German greetings.

Nice and easy to pronounce, and suitable for just about every situation.

Turns out Germans say this too! Go ahead and use Hi when speaking with young people or in informal settings.

And we wonder why so many English speakers take to German so well. Yes, you can also just say Hey to greet a friend or good acquaintance. Sometimes it’s written and pronounced as He.

Although the literal translation for Guten Tag, “Good Day”, sounds antiquated in English nowadays, it’s still a very common greeting in German, if only slightly more formal. So when talking to someone you would call “Sir” or “Ma’am,” Guten Tag would be an appropriate greeting.

This is how to say “How are you?” in German. Use dir when speaking to someone young or someone you know very well. Ihnen is the appropriate formal address for a stranger, especially someone older, and people in positions of authority.

In many English-speaking countries, it’s typical to say “How are you?” to everyone you speak with, including waitresses and store clerks. However, in Germany, this is not as common, so it’s best to use this greeting with people you know.

Similar to Wie geht es dir, but more casual. This essentially translates to “What’s happening?” or “How’s it going?” (Geht’s is a shortened form of geht es, so Wie geht’s? literally means “How goes it?”)

Use these greetings the same way you’d use the equivalent English phrases. Perfect for your classmates and friends, potentially not cool with your new boss or super-strict professor.

This one can be a bit confusing. Colloquially, it means the same as Wie geht’s­: what’s up, how’s it going, how’s it hanging.

Again, fine to use with young people in casual conversation. However, what you have to remember about Was ist los? is that it can also mean “What’s wrong?” especially when you add in a denn. Was ist denn los? usually means “What’s the matter?” and Was ist hier los? can be used to ask “What’s wrong here?”

But don’t worry: in conversation, you’ll most likely be able to tell the difference between these questions by tone of voice and context.

Similar to Was ist los, Alles klar literally translates to “Everything alright?” However, it’s often used as a casual greeting among young people.

When used in that context, Alles klar is basically the same as saying, “What’s up?” or “All good?” in English.

Much like the American English “Long time no see”, you can use this contracted phrase upon seeing a familiar, friendly face after some time apart.

You can say it by itself, or add the person’s name and or a greeting like Hallo beforehand, likeso: Hallo Klaus, lange nicht gesehen!

It can be used for pretty much anyone, but if you want to be a little more formal, you can say Wir haben uns lange nicht mehr gesehen (“We haven’t seen each other in a long time”). It’s definitely wordier, but that’s to be expected anytime you want to sound more gracious.

Bounces right out your mouth when you say it, doesn’t it? Moin is a casual way to say hello in northern Germany. It’s actually rather flexible in usage, as it can also be used as a farewell.

But what exactly does this strange little word mean? Though not entirely certain, it’s speculated that it originated from the Dutch or Low German word moi, which basically translates to “good.”

You could also double-up and say Moin Moin to make your greeting more enthusiastic and cutesy.

Only two letters long, but chock-full of meaning. Na is one of those German words that you’ll hear all the time and make you think “Huh, what’s this word all about?”

Na can mean a friendly “Hey”. Said inquiringly as Na? you’re essentially asking “Well?” or “How are you?” It can also just work as an interjection Na! which just means “Oh!” or “Well then!” It’s also paired with other words: for example, Na gut (“Very well”) and Na klar (“Of course”).

So yes, you can find more than one use for this humble little word, but I recommend you reserve it for informal situations. As a greeting, you can say a simple Na! or be a little more inquisitive and ask Na, wie geht’s? (“Hey, how are you?”) or Na, wie läuft’s? (“Hey, how’s it going?”). And, conveniently enough, you can respond to these inquiries with, you guessed it: Na!

Yes, Tag does mean day, but it can also be used as a relaxed casual greeting if you ever get too lazy or think it’s too stuffy to say Guten Tag. And believe me, that will likely happen more often than you’d think.

There’s also Tagchen, if you’d like to sound more friendly or playful. It literally translates to “little day” (-chen is a diminutive suffix, which makes things sound smaller, cuter or more affectionate). It may also be pronounced Tachchen (the ch in Tach- being of a harder inflection) in certain regions outside mainland Germany.

I’m including these on the list for those of you who might find yourselves in Austria, Switzerland or southern Germany, where these German greetings are used. Saying Grüß Gott in northern Germany would most likely surprise whoever you’re talking to.

Literally translating to “God greets you,” this can seem like an old-fashioned way of saying hello to someone who is not from southern German-speaking regions. However, you’ll definitely still hear it in places like Bayern and Austria, so it’s good to know in case you visit these locations.

Remember to only use Grüß dich with people you would address casually, and use Grüß Sie for everyone else.

Largely regional to Austria (again), Habidere is a contraction of the phrase Ich habe die Ehre, meaning “I have the honor.” This fancy, rather chivalrous greeting has shortened (or crumpled) over time to become the funny-sounding Habidere.

In fact, some folks may find that Habidere is still too long, so they just say D’ere. Seems like laziness is a major factor in the formation of colloquial language.

A somewhat amusing colloquial greeting, Mahlzeit originates from the complete phrase Gesegnete Mahlzeit, which means “Blessed mealtime.” While a Mahlzeit can be uttered as a sort of grace before you dig in, food doesn’t actually have to be involved when you use the expression as a greeting.

Usually, you can greet someone with Mahlzeit! around lunchtime, but in some places, you can use it as an all-day greeting. It’s commonly used within the workplace between colleagues as everyone hurries off to grab a bite to eat.

And how can you respond to someone shouting “Mealtime” at you? Well, you can shout Mahlzeit right back, or politely say Danke.

This is also a southern greeting, which can be used as a goodbye as well. Similar to Grüß dich, you might hear Servus used in Bayern and Austria, as well as elsewhere in Central and Eastern Europe.

Servus comes from Latin, and as a greeting or goodbye it was originally a shortened version of the Latin phrase “At your service.”

How to Learn and Practice German Greetings

If you aren’t sure about some of these greetings or when to use them, you can look for resources to watch native speakers using them in context.

YouTube channels like Easy German can give you more insight into greetings and which ones native speakers use.

You can even look for German talk shows, which often use these greetings, as well.

A program like FluentU can also help, since it lets you watch authentic German videos with interactive captions and a contextual dictionary.

Search for any word in this list and you’ll see any FluentU videos that use it, as well as flashcards for every individual meaning and nuance of how the word can be used. This means that you can learn greetings and goodbyes from native German content like movie clips, music videos, commercials, vlogs, interviews and more.

For instance, I searched for Alles klar?, clicked on its various flashcards and browsed around the sample sentences and clips from all the videos where it appears. This allowed me to see it in use as a greeting, but also as a way to say “it’s all good,” like in this clip about trying to beat the world record for the number of scoops of ice cream on one cone (spoiler alert, they don’t get very close): 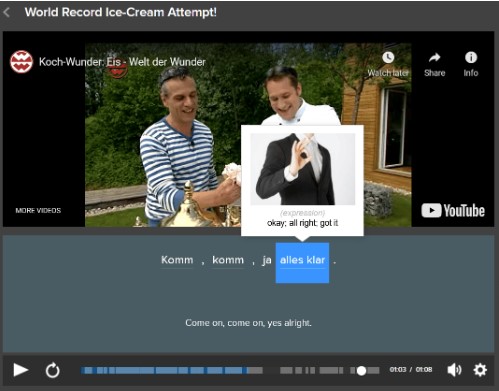 FluentU is a browser-based program, and it’s also available as an iOS and Android app. Plus, you can save any words you want to your flashcard lists and practice them with personalized quizzes.

Now you won’t have that rude awakening about German greetings that I had!

Show off your knowledge of Grüße with a smile and wave!