5 Friendly German News Sites That Are Just Right for Learners

Keeping up with the news in German teaches you a lot of interesting and practical vocabulary.

It also teaches you about the culture and current events in the country or countries whose language you’re studying.

There are plenty of flexible, well-rounded news resources that are specifically targeted toward German learners.

Check out our list below of five news outlets that will help you learn German from the comfort of home, and you’ll be discussing current events with your German friends before you know it.

What Are the Advantages of Learning German Through the News?

You’ll have talking points to use with Germans you encounter

Interacting with native speakers is an invaluable way to learn a new language. And reading the news is a great way to jump-start your interactions with native Germans. Besides encountering lots of new vocabulary, you’ll find lots of new topics to talk about as well.

No matter what, the news will definitely give you more topics of conversation for chatting with your German friends.

Say you want to speak to a German friend about the refugee crisis in Europe. Textbooks, while great resources, aren’t going to teach you all of the vocabulary you’ll need when you’re bringing up current events.

That’s why reading the news is great: You’ll learn all the vocabulary necessary for having an intelligent conversation with someone about what’s going on now, so if you want to ask about the Flüchtlingskrise (refugee crisis), you’ll be all set.

You’ll get a chance to practice German reading and listening

News outlets often present their news in article form, a news clip or even just audio. This multi-sensory approach to German learning will help you become better at reading and listening to authentic German speech.

A program like FluentU can help round out the other two skills: writing and speaking. On FluentU, you’ll find many native videos like news segments (as well as movie clips, entertaining commercials, inspirational talks and more).

Since these videos are accompanied by interactive, accurate subtitles, you’ll be able to check the meaning of any word as you watch, helping you to reinforce your reading and listening skills—not to mention building your vocabulary. But FluentU also lets you hone your other language skills through personalized quizzes, where you can type or say your answers. 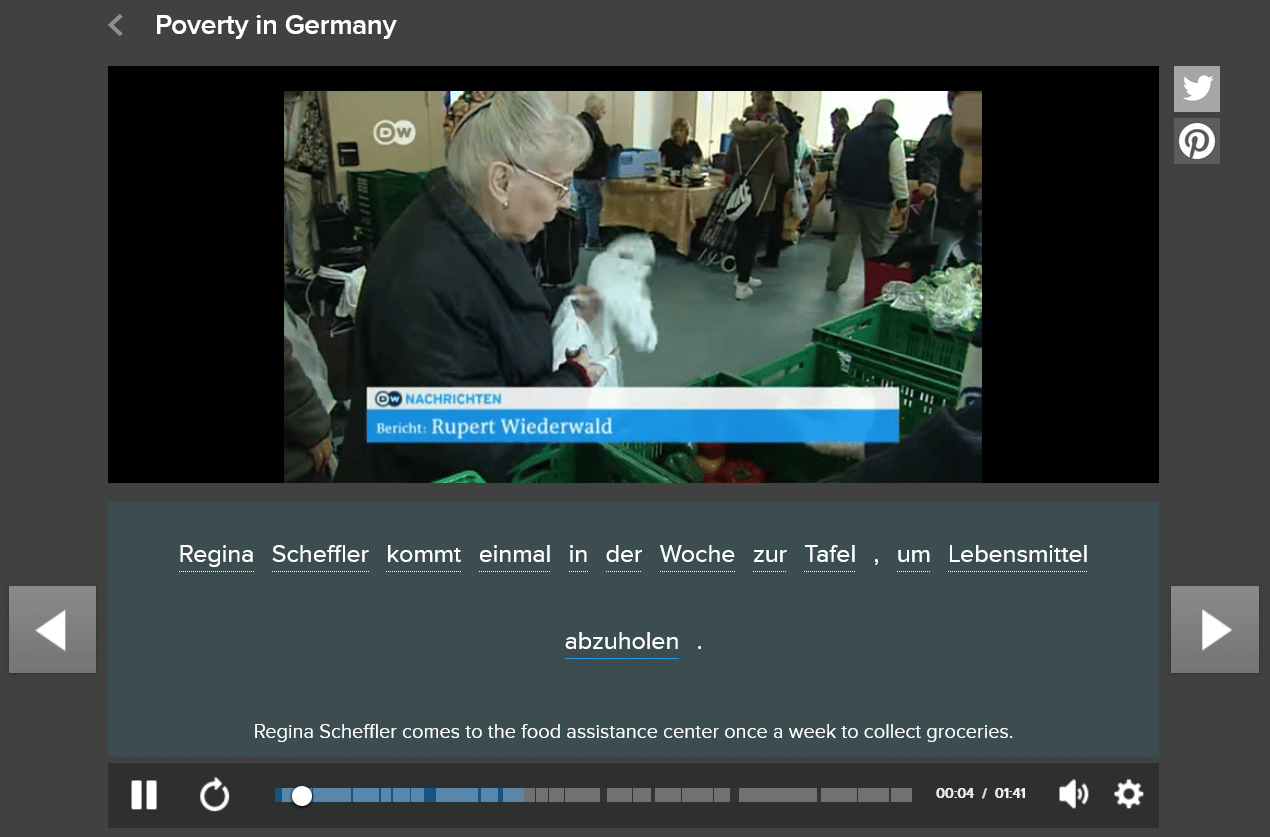 What Topics Can You Expect to Read About?

So what topics will you encounter in the German news? Although of course the news is changing every day, you can rest assured that you’ll probably stumble across something related to the following three subjects at some point.

Germans are generally very concerned about their privacy, which makes sense considering that East Germans spent four decades living under a heavily monitored society in the German Democratic Republic. That’s why you’ll see plenty of news stories related to surveillance, technology and data protection in German newspapers—with possible references to how at one point the NSA reportedly spied on German Chancellor Angela Merkel’s cell.

Germany’s place in the EU

Germany’s is the strongest economy in the European Union, and Merkel is a powerful leader. Consequently, you’ll see plenty of stories that deal with Germany’s role in the EU: how the country sets the tone for policy, as well as how Germany interacts with other countries in the eurozone. More recent examples include Germany’s role in the negotiations involving the Greek debt crisis and Germany’s stance on the influx of refugees flooding into Europe.

Stories that involve World War II and Nazi history crop up in German newspapers fairly regularly. You’ll almost definitely see stories about unexploded bombs from American and British raids discovered in various German cities. Stories about Nazi officials or artifacts appear once in a while too, such as when a train full of Nazi gold reportedly materialized in Poland in 2015.

5 Friendly German News Sites That Are Just Right for Learners

Nachrichtenleicht (news light) is a site geared towards language learners that simplifies the news into A1/A2 level German. This site is invaluable to language learners because it exposes you to actual German news that’s presented in a very simple manner.

The site also includes a podcast with each article, in which the reader recounts the articles in extremely slow, enunciated German, which is a great way for beginning learners to get used to hearing and comprehending German. And the best part is that there’s a vocabulary list at the end of every article so you can study key words and phrases on your own.

Der Spiegel is one of Germany’s major news magazines, available in glossy print and online. Since Der Spiegel is a news outlet of record, it will expose learners to in-depth looks at the country’s pressing issues. The possible downside to this is that Der Spiegel is written in complex, real German: You won’t find articles simplified for language learners. But the good news is that the articles are usually still simple enough for intermediate language learners to puzzle out with a good dictionary on hand.

Plus, Der Spiegel includes lots of pictures, which can help you figure out what’s going on in an article.

Finally, the site also offers an English sister site, which can be invaluable for learners who want to brush up on German news in English before diving into the original.

Deutsche Welle is an online news site for German natives. However, it’s still a key site for language learners because of its “Learn German” section. This is where you’ll find slow-spoken news podcasts that you can download and listen to on the go.

On that same page, you’ll find plenty of other resources for language learners as well!

Deutsche Welle advertises its podcasts as being for B2- or C1-level learners, which means intermediate to advanced.

Logo is a children’s website, so it explains the news in pared-down terms with plenty of pictures, video and very simple vocabulary. Because the news is explained in an even more simplistic fashion here than on Nachrichtenleicht, this site can be a great way to jump into German current events without overwhelming yourself with complicated concepts or vocabulary.

Logo also offers sections explaining the backstories of current events for kids, which can be very helpful for people who aren’t familiar with German culture and news.

Since Logo is targeted at a young audience, it’s most appropriate for A1/A2 level learners.

The Huffington Post in German is more complex than Logo or Nachrichtenleicht, so it’s definitely not for beginners. However, the website, like the English-language Huffington Post, offers articles about Germany and the whole world, so if you decide you don’t want to read about Deutschland, you’ll have plenty of other options. The Huffington Post also offers lots of pictures to help complement the text, as well as opinion pieces to keep things interesting.

The Huffington Post in German is best for intermediate, B2-level learners.

So what are you waiting for?

Start reading one of these sites regularly, paying attention to grammar and vocabulary, and you’ll be discoursing on German events auf Deutsch in no time.