New language learners tend to try to run before they can crawl.

Newcomers to the German language should not expect to tackle the collected works of Goethe in the first weeks and months.

Rather, dial down your expectations and give children’s books a chance!

Why Children’s Books are Great for German Learners

It is all too common to find language learners trying their skills out with material that is not made for their level. Sure, they may be feeling confident after learning German idioms, slang, and proverbs. They may be well on their way to German fluency, but there is no real “fast lane” to master German literature. Instead of gradually increasing comprehension, they attempt to read Kafka’s “Metamorphosis” after two weeks of half-hardheartedly studying vocabulary.

If you are just getting started and select reading material that causes you to reach for the dictionary every second, you will get exhausted and unwilling to continue reading practice. A much smarter approach is to progressively increase the difficulty by using material that is just a little above what you know.

For this reason, children’s books are an awesome place to start for most new German learners. While they might not be what you would usually read, there are a number of advantages to reading books intended for a much younger audience:

Books for children are intended for a group of people who just started out learning the language. Think you can identify with that? As a consequence, these books use easy vocabulary and simple language so as not to overwhelm first-time readers.

2. They are meant for native speakers

Children in Germany actually grow up with these books. This is where they get some of their early words and sense of word order from. If it works for them, it can’t be bad for you, right?

3. They are meant to be read out loud

Children’s books—especially ones for the very young—are intended to be read aloud by parents. You can pretend you’re reading to a little one as you read them aloud to yourself. This will give you both reading and speaking practice in German. Try a few silly voices and really have fun with it!

But what if you’re a little unsure about your German pronunciation? How can you check it?

The best way to learn proper pronunciation is to listen to native German speakers.

To combine authentic German pronunciation with the simplicity of children’s stories and songs, you can let FluentU read to you. FluentU is an immersion program that uses native German videos to teach the language.

For example, you can listen to the classic story of “Hansel and Gretel” or hop along to the beat of Kinderlieder (children’s songs) like “Bunny Rabbit in the Hole.” You can even learn common German greetings or how to ask easy first questions in German, establishing a solid foundation in the language to bolster your progress. 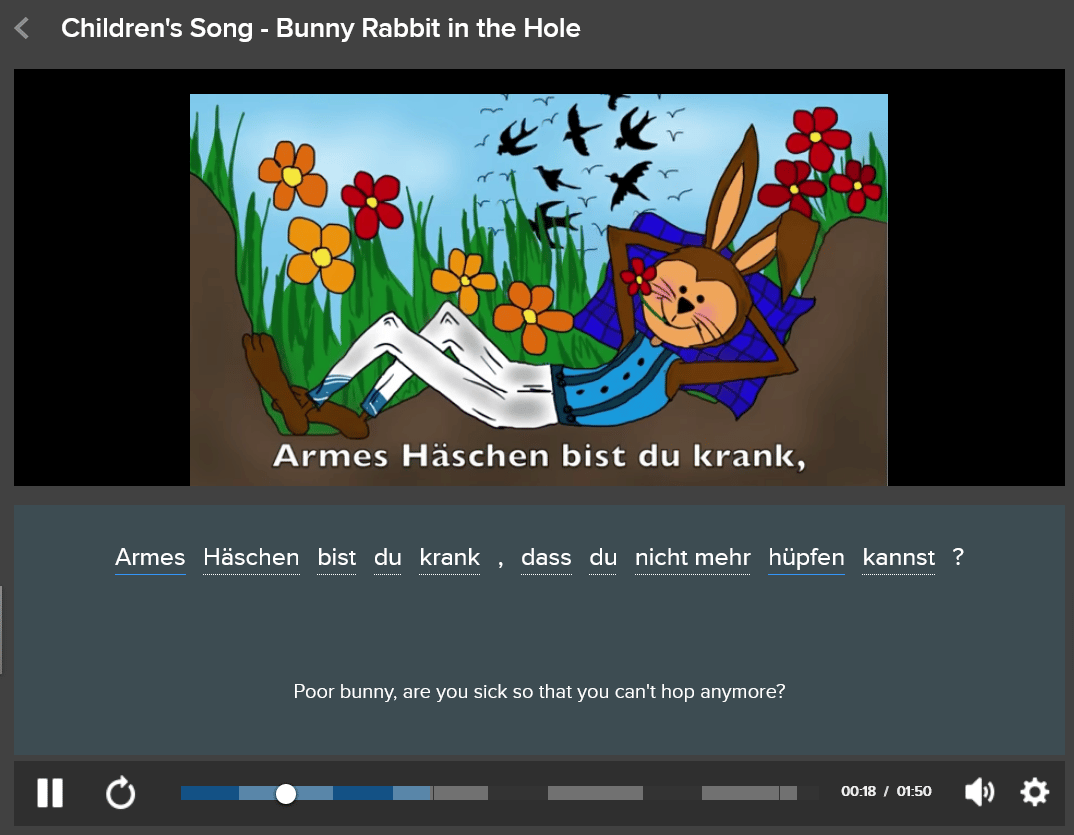 Videos are subtitled in both German and English, and either can be toggled on or off at your whim. If you’re ever unsure about what a word means, you can just tap on the unfamiliar German word to get a definition, pronunciation and a picture—plus text and video examples of the word in context.

And FluentU’s adaptive, multimedia flashcards and quizzes give you a chance to practice the words you learn, so you won’t forget them.

4. They are often very repetitive

Books for younger children frequently repeat sentences over and over. This is good news for beginners as it means you will automatically practice the same words and grammatical structures again and again like you would with a rote repetition study approach.

Where to find children’s books in German

The big question is where to find these books. If you are not living in a German-speaking country, you won’t always find a library carrying children’s books in your target language. Luckily there are a number of online resources where you can even score some for free.

Now that you know how to find them, below is a list of children’s books in German which are excellent for learners in order of difficulty. You can move from one level to the next and gradually ramp up your reading skills.

Not all of these books are actually by German authors but all of them have been translated and become an integral part of growing up for children in Germany. Therefore if you read these books, you get a cultural education at the same time. 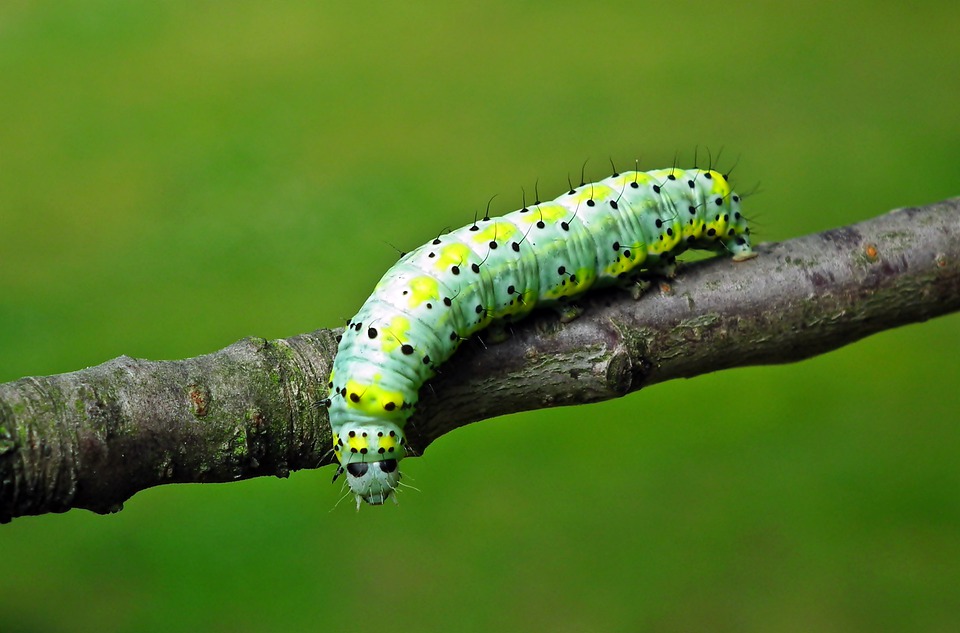 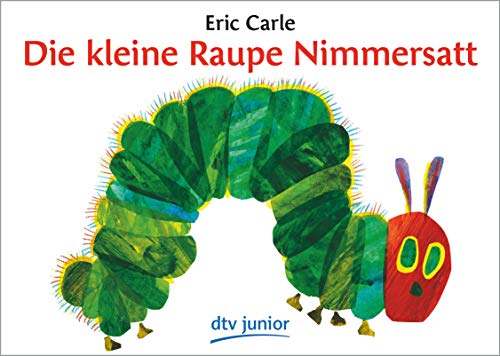 Recognize this colorful little character? This book is the German version of “The Very Hungry Caterpillar” by Eric Carle. It is a classic in waiting rooms of pediatrician offices. Due to the very repetitive content, it is most suited for people who have just started out learning German. In my opinion the German title is actually better than the original. Nimmersatt (“never satiated”) is definitely a great word to drop in front of a German friend who won’t stop eating. 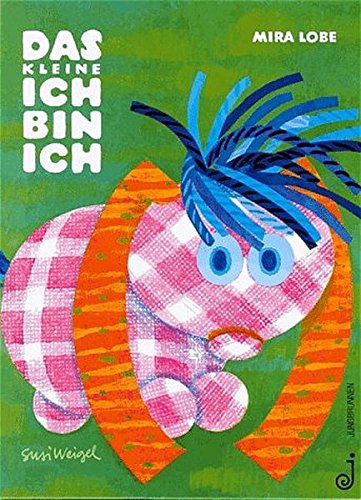 This book is the story of a nameless animal and its search for an identity.

Since its publication in 1972 it has sold almost a million copies and has been translated into many other languages.

While it uses very easy vocabulary, the book is told in the form of rhymes, presenting a bit more of a challenge to readers.

The books by author Janosch are favorites among children and adults alike. The stories are heartwarming, the illustrations adorable, and the books contain more text than the examples above. There was also an accompanying TV series of which many episodes can be found on YouTube. 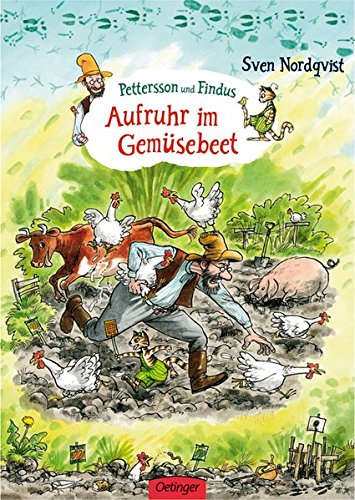 The book series of farmer Petterson and his cat Findus by Swedish author Sven Nordqvist has been translated into 44 languages, German being among them.

So far there are nine stories about the pair, which are slightly more elaborate and therefore told in longer text passages.

Ideal for learners with a basic understanding of German.

I know Hotzenplotz is a hard word to pronounce, but don’t be put off by that. This story is another classic of German literature for children and has been turned into several movies. While it still contains a lot of illustrations, it is the first book on this list that does not rely on imagery for storytelling but instead would also work as a text-only version. 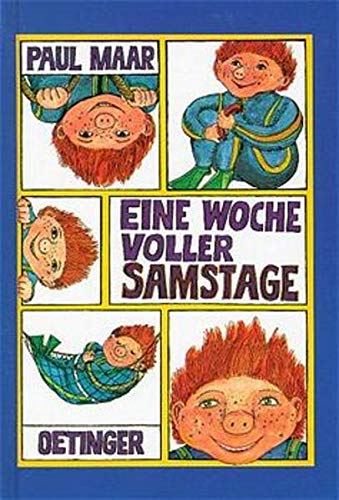 The stories about the Sams, a wondrous and loud creature that can grant wishes, and its adoptive father Herr Taschenbier is in the same category as “Räuber Hotzenplotz.” Images enhance the understanding, however, this is a real book.

If you can finish it, you are probably ready for German middle school.

And if you like it, there are six more books where this one came from. 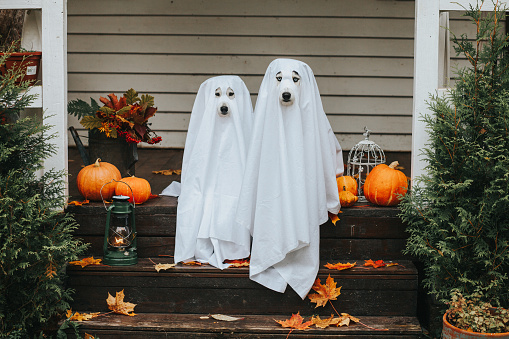 Otfried Preußler is the author of several successful books for children of various ages. Two of his works made it on this list. “Das kleine Gespenst” describes the story of a little ghost who wants to see daylight but can’t seem to stay awake. It is a very cute story which was also turned into a movie in 2013. 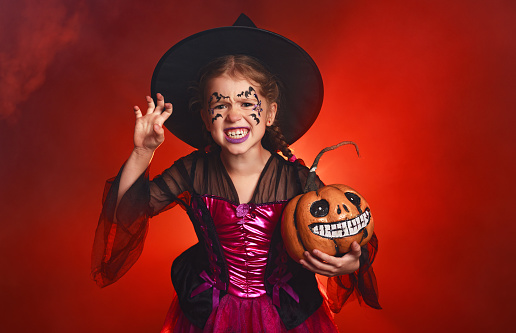 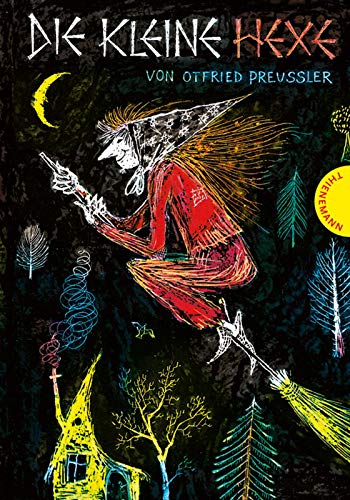 The eponymous little witch wants to earn the respect of the other witches so she will be allowed to fly with them on Walpurgis night.

Although the story might sound infantile to grown-up ears, the language is actually quite demanding and should not be underestimated.

The book, also by Otfried Preußler, has been translated into 47 languages and made it to TV screens even in Japan. 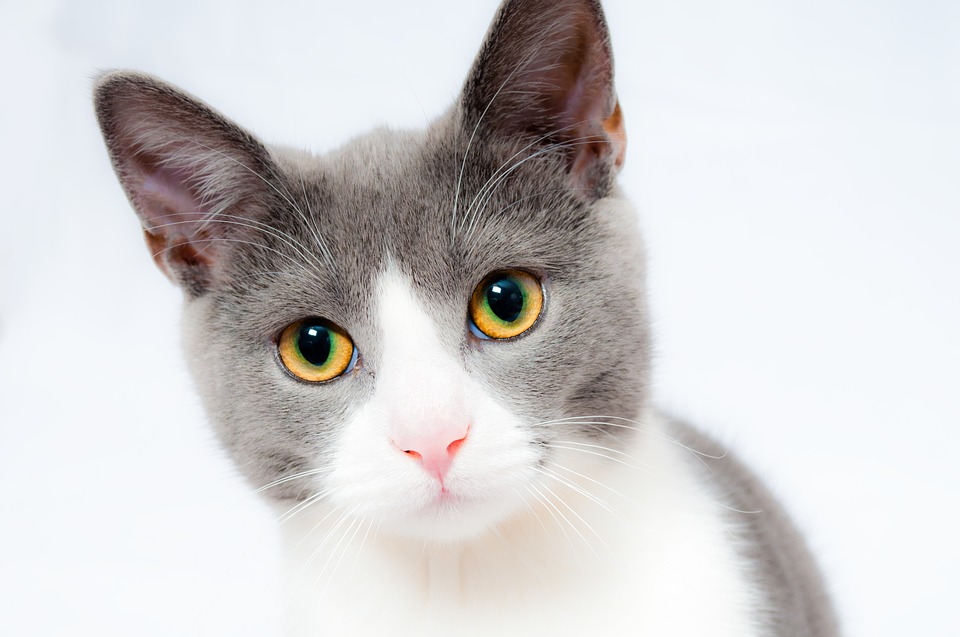 The full name of this book “Der satanarchäolügenialkohöllische Wunschpunsch” features the probably longest adjective ever invented in the German language. It was written by Michael Ende and tells the story of a cat and a raven who try to prevent a pair of evil magicians from creating a potion that grants wishes (Wunschpunsch) for their evil purposes.

The story takes place entirely on New Year’s eve from about 5:00 P.M. to midnight. Definitely worth reading!

Now we are getting into the realm of what can be considered as children’s novels.

The stories about Jim Knopf and his friend Lukas are among the most successful books for young people in Germany. Millions of children have read about them and watched the accompanying TV series.

Written in post-war Germany, the book contains a lot Nazi imagery turned on its head and comments on such issues as English colonialism. 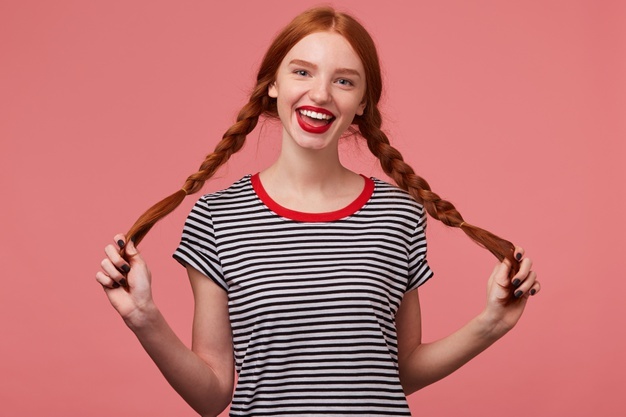 Astrid Lindgren’s novels about Pippi Longstockings are as popular in Germany as they are all over the world. Generations have grown up with the adventures of the world’s strongest girl and her friends.

Apart from “Pippi Langstrumpf,” Lindgren authored a wide range of other books for children which make for equally good reading material.

This is the second book by Michael Ende on this list (the other one being “Jim Knopf”). “Momo” is a fantasy novel about the concept of time in modern societies.

The book criticizes consumerism and the stress of modern life.

Published in 1973, it foreshadowed the time deprivation which is reality for most people today. It is also a darn good read.

No list of German literature for children would be complete without author Erich Kästner. The story of Emil and his detective friends is set in pre-war Berlin, offering an interesting glimpse into German history. Kästner’s works are classics in Germany’s youth literature and several of them have been turned into movies. 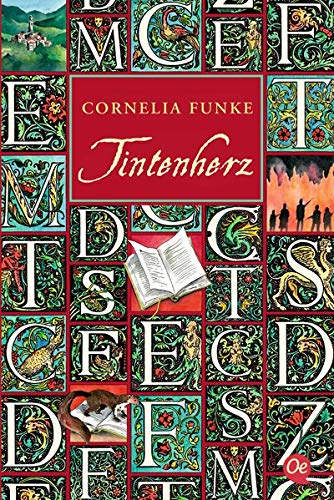 The “Inkheart” trilogy is among the most contemporary books on this list. It is the story of a girl whose family has the gift to make characters from stories come alive by reading books out loud.

It is a love letter to words and writing and their ability to create entire worlds for the reader.

The book was also turned into a major motion picture.

It shouldn’t come as a surprise, but the story of the young English wizard is one of the most popular children’s books in Germany. It is enjoyed by young and old alike. If you have graduated to reading an entire book of this series, you are well on your way to mastering German. Plus, the fact that you probably have already read the series makes it easier to get into.