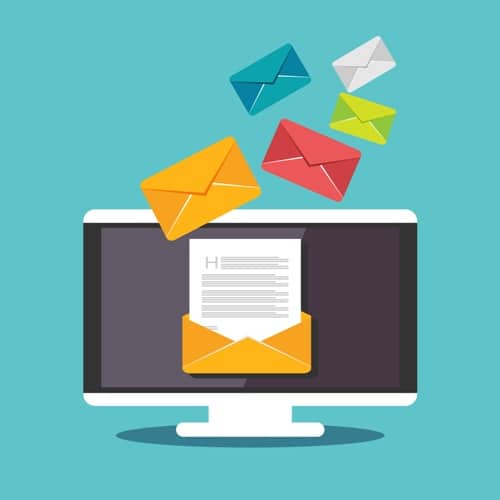 Do You Know How to Write an Email in German? Learning How Will Be a Breeze with This 5-Point Checklist!

I will really like to have this job, man, because I’m seriously good on teaching. Will you hire me? Thanks much.

Do you want your email to sound like this when you write in German?

But unfortunately, when you’re a beginner, this is generally how you sound. Discouraging, right?

Yet being able to write a cogent email in German is quite important if you want to make it in Deutschland.

But don’t worry. Get acquainted with our list of five parts of a perfect German email below, and you’ll be writing to everyone on your contact list auf Deutsch in no time!

Two Matters of Etiquette to Remember When Writing Emails in German

Before we jump into the anatomy of an awesome email, here are two quick yet important points to keep in mind while composing your email.

Remember that German is a language that distinguishes between formal and informal manners of address. Whether you should address someone as Sie (you – formal) or du (you – informal) is a tricky matter of etiquette. You may think you could play it safe and always call a person Sie unless directed otherwise.

But Sie can offend people sometimes too, if the person you’re writing to wants to be perceived as young and hip. Therefore, make sure you think long and hard before you decide which of these forms to use (you’ll find more information in the formality vs. informality section below).

Much like with Sie and du, you’ll have to decide whether to address the person by first name or title and last name. Germany is a more formal society than the United States, on the whole, so proceed with caution before addressing someone by their first name—unless they have already addressed you in that way.

5 Elements of a Killer Email in German

Make sure your email has these five elements, and you’ll be impressing your German boss, your German teacher or your German friends in no time.

Note: All these rules apply for letters as well. You may think that you won’t need to write a letter in German in the mid-2010s, but think again. Germany actually still relies on snail mail for many matters of official business.

Formal emails (and letters, for that matter) in German start in an equally formal manner: Sehr geehrte (most esteemed/very dear) so-and-so. Make sure to use the correct case endings for sehr geehrte (it is an adjective, after all).

For an email outside of a formal business setting, you can use the greeting Liebe, or “dear.” Just make sure to use the correct endings for this one as well, writing Liebe for a woman and Lieber for a man.

For very informal emails, you can say Hallo! (hello), which is basically the equivalent of opening your email with “Hi!”

What’s the biggest mistake you might make with the opening? The adjective endings!

Make sure you get those right. There’s nothing worse than getting off on the wrong foot with your new boss, teacher, employee or professor by making a basic German mistake in the very first section of your email.

The biggest point to remember when writing the body is to keep it formal. I know I keep stressing this, but it’s really important to make the proper impression, since Germany really is more concerned with politeness and etiquette that might seem old-fashioned to an American.

This means not using any slang vocabulary. Keep your message brief and to-the-point, and make sure all grammar and vocabulary are correct.

You have a lot more leeway with emails when you are exchanging them with friends. In an email with a German buddy you’ve known for awhile, or even with a tandem partner you’ve met with a few times, you can drop the overly formal air and use slang, emoticons, the whole nine yards.

In German, you would write:

Capitalizing that first word will mark you as a non-native speaker right off the bat!

Mit freundlichen Grüßen (yours sincerely) and Mit freundlichem Gruß (regards) are both perfectly acceptable closings for formal emails. Just make sure to pay attention to those endings!

Friends and family in Germany typically sign emails with Viele Grüße or Liebe Grüße (both meaning “pleasant regards,” basically), but if you want to get really informal, you can sign off with VG or LG. I would recommend this for friends with whom you’ve corresponded a few times.

Germans don’t use a comma after their closing, the way you do in English. So instead of saying

If you’re writing a business email, you need to know the attendant vocabulary. Some email vocabulary and business vocabulary includes:

Some phrases that might prove useful while writing are:

If you’re writing an informal email, you probably don’t need to know the vocabulary for its different parts. But you still might want to use the email to invite someone somewhere, wish them a happy birthday, or see how it’s going. Some useful phrases for those are:

You can use all of these phrases for both formal and informal emails, of course, but just make sure to double-check your vocabulary before you hit send. I often use dict.cc to reverse-translate some of my phrases just to be sure they make sense!

5. The Grammar and Level of Formality

The grammar of your email will really be tied to whether you decide to use Sie or du—and with a formal email, you’ll want to use Sie. That means all verbs should be conjugated with Sie and any imperatives should be written in Sie form.

(If anyone needs a refresher, Sie form verbs look the same as infinitives. For example, “You write” is Sie schreiben.)

For an informal email, you should use du, right? Yes, probably. But as stated above in the etiquette section, it can be difficult sometimes to know when to use one or the other. I have some friends in their forties here in Germany who would be offended if I called them Sie, because they would wonder if I thought of them as old.

And lots of people who work at tech start-ups or other ultramodern institutions are more likely to say du. But you don’t want to switch to du too soon! Generally, a good rule of thumb is to call your friends du, and call your colleagues, employers and anyone of your parents’ generation Sie, unless they invite you to do otherwise.

You might make a Sie/du or a first name basis/last name basis mistake, but that’s okay. Chances are whoever you’re emailing knows that you’re not a native German speaker, and will cut you some slack.

Two Examples of Emails in German

Got all that? Then take a look at these two examples to see all five of these principles in action.

I would like to know whether my letter has arrived. Have you seen the letter? If not, please give me a call.

How’s it going? I hope everything’s good with you. There’s a party this weekend. Do you have plans? If not, you should come! So see you soon.

German emails have a few key differences from English emails, but don’t worry. Once you nail them, you’ll be writing to your boss, friend, boyfriend or coworker auf Deutsch effortlessly.

You’ll get to learn German with content that native German speakers watch on the regular, from Volkswagen commercials to funny YouTube videos, scenes from “Guardians of the Galaxy” and the hit song “Let It Go” from “Frozen.”