German Verb Conjugation: How to Talk About the Past, Present and Future

German verb conjugation, well, we won’t say it’s easy, but it comes from a much more familiar place than that of other languages.

There are a handful of things you’ve got to learn, sure, but before long, it feels natural.

The patterns of German verb conjugation are smooth as butter and regular as rain.

The Different Verb Groups in German

The good news: German is largely sticks to its own rules. You can divide German verbs into three groups based on how they’re conjugated:

Let’s go over each verb group:

The vast majority of verbs (over 90 percent!) follow regular patterns that can be easily memorized.

Funnily enough, these are called “weak” verbs in German—perhaps because they have no will of their own to stand out from the crowd, so they just follow the regular rules.

Before we go deeper into the conjugations, it’s good to recognize the infinitive forms.

Many German verbs, end in -en in their infinitive forms. The infinitive, as you’ll recall, is the basic form of the verb, equivalent to those “to do” verbs in English.

Here are some of the most common regular German infinitives:

The part of the verb before -en is called der Stamm (the root/stem). Before moving on to verb conjugation, you need to know how to separate the stems from the ending.

For example, with the present and simple past tense, you simply take the infinitive, remove the -en ending and add the appropriate ending, depending on who is doing the action. Let’s try it out on machen:

There are only a few verbs that end in letters other than –en, and most of those end in either -eln or -ern. Again, everything before these endings is considered the root.

basteln — to construct (arts and crafts)

And now, the bad news. German has a none-too-small number of irregular verbs as well.

If there’s one rule that holds true across languages worldwide, it’s that irregular verbs are more commonly used than regular ones.

Since regular verbs are weak verbs, you’d think that irregular ones would be strong verbs, and you’re right! Strong verbs see vowel changes in the stem when they conjugate, and sometimes even different endings.

Luckily, these strong verb changes do follow their own set of rules: only having a stem vowel change in the du and er/sie/es forms (second and third person singular) in the present tense, for example. These rules are crucial to helping you make sense of the madness!

Some classic strong verbs are:

However, some verbs like sein (to be) are so strong, they break all the rules:

So, these ones you just need to learn off by heart. Conveniently, there are very few of these.

There’s one more verb group called “mixed” verbs, which fall somewhere in the middle. There aren’t many of these at all, but they are quite common, and luckily share some similarities with their rule-abiding “weak” cousins.

Mixed verbs still see vowel changes in the past tense, but they stick with the standard verb endings on their new roots.

bringen (to bring) — ich brachte (I brought), ich habe gebracht (I have brought)

denken (to think) — ich dachte (I thought), ich habe gedacht (I have thought)

The most famous is haben (to have). You’ll get a lot of practice with this one below.

Now that you know all about the different verb types, let’s study exactly how to conjugate them:

The Present: What Is Happening

The present tense in German is nice and simple. It’s a bit similar to English: it describes habits that you regularly do.

However, it also conveys the meaning of the present progressive in English—describing things that are happening at the moment.

Remember stems and the infinitive ending –en? We’ll cut these up a little bit for the present tense.

Here’s an example featuring the weak verb sagen (to say):

Now, let’s look at a mixed verb, haben. The endings don’t change, but note what happens to the stem:

Notice that es hat and ihr habt have the same ending, but they turn out different. For es hat, we lose the b in the middle of the third-person stem.

Finally, strong verbs actually have the same endings for the present tense. However, they do see a vowel change in their stem in the du and er/sie/es forms.

For example, lesen (to read) sees a vowel change of e → ie, so conjugating it in the present tense looks like this:

For all their bluster, strong verbs aren’t forcing you to do too much of the heavy lifting in the present tense. All you need to focus on is learning those stem changes!

The Past: What Has Happened

German has two different past tenses that correspond to the one we know and love in English:

Preterite or Simple Past Tense

This past tense is used most commonly in writing and only with certain verbs in speech.

That’s just the natural development of the spoken German language for you—some verbs simply sound more natural to conjugate in the simple past.

For weak and mixed verbs, these are the verb endings you use:

Applying the conjugation table above, here’s an example sentence with haben:

Sie hatten keine Bücher mehr.
(They had no more books.)

Strong verbs usually undergo significant vowel changes in the past tense and past participle, just like English does with “swim, swam, swum,” for example.

Take a look at this:

How do we make that “have done” tense, known as the present perfect in English?

First off, please note that it doesn’t actually have the same meaning as in English. We’ve just been using this translation to differentiate between the two past tenses. Usually, habe gesprochen just means “spoke.” It’s the oral form, whereas sprach is more often the written or literary form.

To form it, we simply take the present tense of haben, or sein for verbs of transformation and motion, and then put the verb’s past participle at the end of the clause:

Weak and mixed verbs conveniently stick to regular rules for their past participles. You start off with ge-, then add the verb stem, then end with -t. For example:

Check out these sentences:

Now, irregular past participles are hard to predict—so hard that you’ll usually just see them listed in textbooks alongside the root form so you don’t have to look them up.

Here’s one more example with that same root:

Haben sie in Japan Japanisch gesprochen?
(Did they speak Japanese in Japan?)

The Future: What Is Going to Happen

This one, by contrast, is a total cakewalk.

First, we take the word werden (to become). Let’s conjugate that one real quick, as it’s a strong verb.

Now, all we do is add that conjugation to the infinitive and call it a day!

Ich werde nicht Skifahren gehen.
(I will not go skiing.)

It’s actually as easy as that! If you simply know werden plus the infinitive, you can use the future tense in German.

Now remember, in your German reading you’ll certainly come across the phrases ich will and er/sie/es will.

Er will Gitarre spielen.
(He wants to play guitar.)

You will also often just see the present tense with a time marker to express future actions, similar to English. This makes learning your present tense conjugations even more useful:

How to Practice Verb Conjugation in German

Clearly, the worst part about learning German conjugations is memorizing the irregular verbs.

The best shortcut there is for that is to check the verb against its English counterpart. Is it a regular English verb? If so, there’s a decent chance it’s regular in German.

Is it one of those “swim, swam, swum” verbs with a changing vowel? Then, it’s almost definitely going to be irregular in German.

As for getting confident with conjugation in general, it’s all about input and repetition. If German isn’t your native language, then you could also take more structured language learning courses: 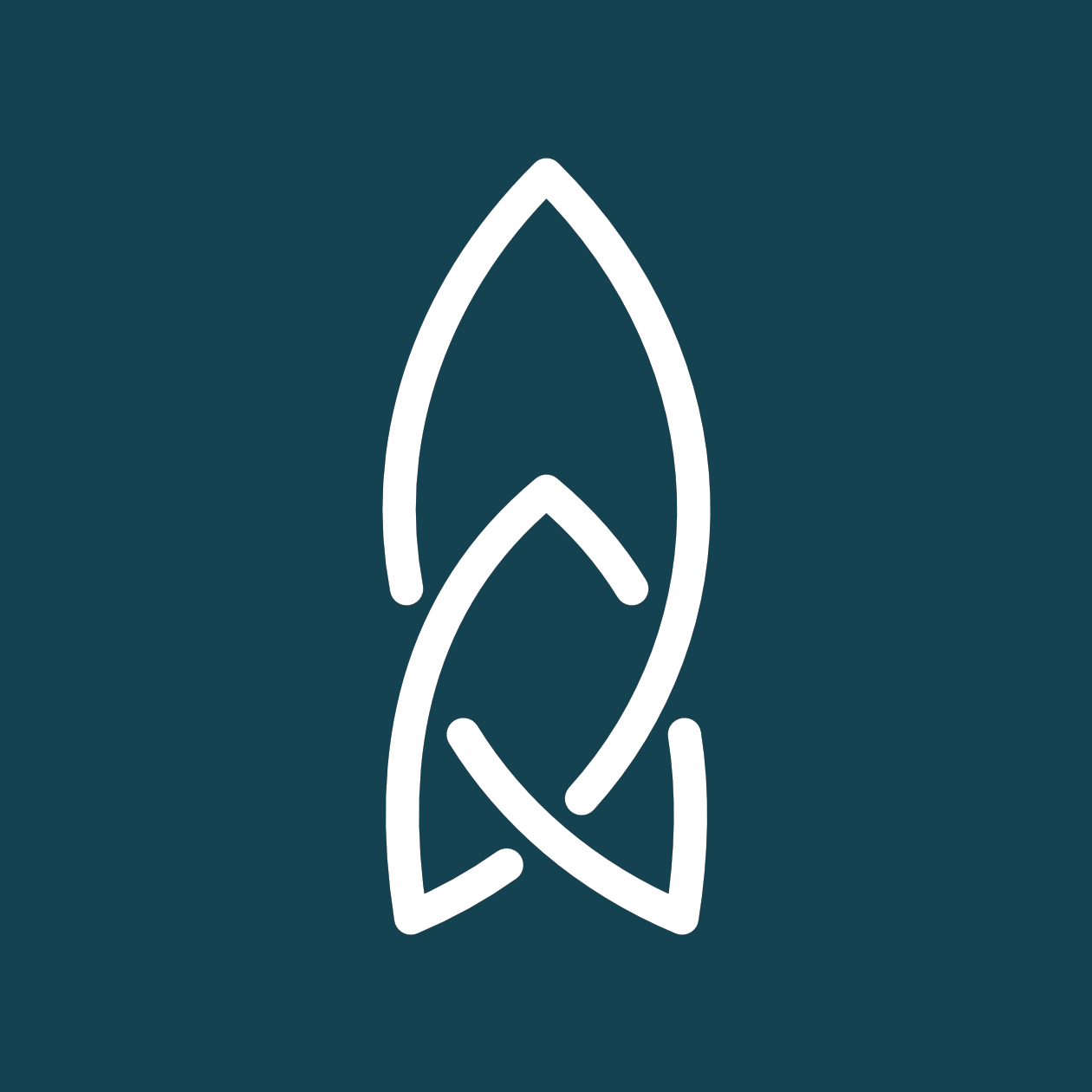 One well-known course is Rocket Languages, which combines training for all of the skills—reading, writing, listening and speaking. Since there’s a voice recognition system, you can practice your pronunciation until you sound like a native German speaker.

It also teaches you fun cultural facts with lessons that incorporate interesting tidbits about working and living in Germany.

Another way to practice German verb conjugation more naturally is by immersing in authentic German videos on the FluentU program. It has interactive subtitles which allow you to click on any word to see a definition and examples, including what tense a verb is in: 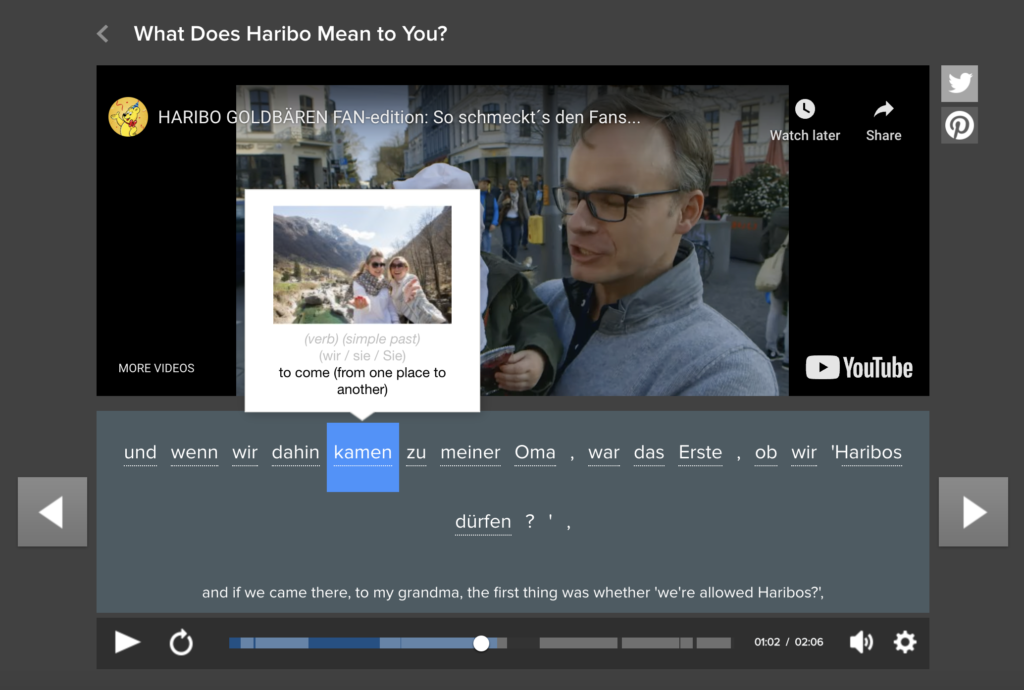 You can then save new words as flashcards or take personalized quizzes to hone your grammar. On top of this, the platform lets you look up German verbs in any tense and check how they’re used in sentences.

With these rules and resources for German verb conjugation, you just need to spend time with the language to make it seem natural.