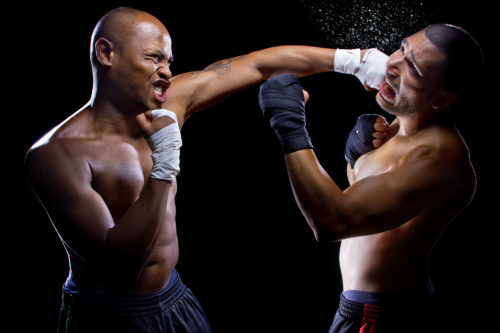 Do your German skills stand a fighting change against strong verbs?

Hold on, hold on—put those boxing gloves down.

They’re not called strong because they’ll beat you up.

They’re strong from a grammar perspective. That is, strong verbs squash regular German conjugation rules and instead use their own.

It may sound a little intimidating at first, but you’ll soon see it’s easier than you think.

We’ve got a straightforward walkthrough and verb practice resources to help you understand and conquer these tricky verbs.

Then we’ll give you a list of 40 essential strong German verbs to memorize so you’re always prepared to face ’em.

What Exactly Are Strong German Verbs?

Weak verbs conjugate according to systematic rules, which is why they’re also referred to as “regular verbs.”

By contrast, strong verbs don’t play by any particular rules when it comes to conjugations. They conjugate irregularly, which means they’re also called “irregular verbs.”

Let’s take a look at the difference between strong and weak verbs with examples first in English:

When you talk about having run yesterday, do you say “I runned” or “I ran?”

If “to run” were a weak verb, you would say “runned,” because you would use the core verb (run) and add the regular past tense verb ending (-ed). However, “to run” is a strong verb, which means it has its own, irregular conjugation rules. So “I runned” is wrong. You would say, “I ran.”

Luckily for native English speakers, German has a similar structure to English when it comes to verbs.

How Strong Verbs Work in German

Again, it can be easiest to understand strong verbs by first comparing them to weak verbs.

As noted above, weak verbs follow systematic, predictable conjugation rules. This makes them particularly easy to learn. You don’t have to memorize different forms. You just need to remember which verbs are weak and once you know that, you know the form it’ll take.

ihr fragt (you all ask)

To conjugate the past participle for weak verbs, you put “ge-” in front of the verb core and “-t” at the end.

The past participle for fragen is gefragt (asked).

To conjugate in the third person imperfect, or simple past tense, you add “-te” to the verb stem.

For fragen, the third person imperfect is fragte (asked).

Strong verbs, however, don’t follow regular conjugation rules and often have a change in the verb stem (the verb stem is the infinitive, or dictionary form of the verb, with -en removed from the end).

For example, to get the past participle of the verb gehen (to go) we need to change the stem (geh) and tack -en on the end.

To conjugate the simple past tense of strong german verbs, you’ll often change the verb stem and not add anything at all.

The third person imperfect form of gehen is ging (went).

Strong verbs, unfortunately, just need to be memorized. However, there are some tricks you can use to make things easier.

The Past Participle and Third Person Imperfect Test

The most common places you’ll see verb stem changes when working with strong verbs is in the past participle or the third person imperfect—which is why we use those two conjugations to test whether verbs are strong or weak.

Take a look at these phrases formed from the verb sagen (to say). Do you think sagen is a strong or weak verb?

ich habe gesagt (I have said)

Notice that the past participle follows the “ge- + verb stem + -t” rule. Then check the third person imperfect and look for a verb stem change. In this case, there’s none. So sagen is a weak verb.

You can also use this handy study hack to distinguish strong and weak verbs: verbs with English cognates are often the same type of verb in German.

For example, “to laugh” is a weak verb in English. You say “he laughs” and “I laughed.” See how the stem of the verb doesn’t change? In German, lachen (to laugh) is also a weak verb.

Before we get ahead of ourselves, we should take a moment to notice that there is, in fact, a third category of verbs. You might think strong and weak leave no middle ground, but there are also mixed verbs, which have qualities of both strong and weak verbs. In other words, these verbs enjoy the convenience of those regular, weak verb endings but they also have verb stem changes. Check out this example:

In this case, we have a verb that follows weak verb ending rules, but we can also see a verb stem change in the simple past tense (hab becomes hat).

Memorization relies heavily on repetition and not just spending a long time focusing on something once. Fortunately, for those of us who carry smartphones, there are tons of good apps for memorizing sets of information.

You can use your standard notepad app to keep lists of tricky German verbs, and check it while you’re waiting in line at the market or standing at a bus stop. You can also take advantage of flashcard apps like Quizlet, which have many lists available to help memorize German verb sets. If you can’t find the ideal list you’re looking for, you can always make your own, too.

To get exposure to new German verbs in an authentic environment, check out FluentU.

Each video comes with interactive captions you can use to get the definition of any word you don’t recognize.

Click unfamiliar verbs and try to discern whether they’re weak or strong from the video context. After you finish each video, FluentU will test you on the new words with fun exercises and flashcards. Plus, FluentU remembers what you’ve learned and adapts its quizzes to focus on areas where you need more practice, so you get a truly personalized learning experience that keeps you moving forward. Experience it for yourself with a free trial.

Here’s the good news: most German verbs are weak verbs. That means you can rely on your systematic conjugations for most verb usage. To help you start your journey toward memorizing German strong verbs, we’ve compiled a list of 40 commonly used strong verbs for your learning enjoyment.

The verbs below are also provided with their respective past participle and third person imperfect forms.

Dürfen (to be allowed)

Kennen (to be familiar with)

Verb types can sometimes seem like some abstract piece of unnecessary information. And if you really prefer to memorize everything and you don’t like relying on systematic shortcuts, that might just be the case for you. However, for those of us who like to make our lives easier by grouping things together when we can, learning which verbs are weak and which are strong is a great first step toward increasing German vocabulary. Without too much trouble, you’ll find that you already know how to use many verbs if they’re conjugated regularly, and you’ll have more time to focus on those cases that need special attention because of irregularities in how those verbs are conjugated.

Want to know the key to learning German effectively?

It's using the right content and tools, like FluentU has to offer! Browse hundreds of videos, take endless quizzes and master the German language faster than you've ever imagine!

Watching a fun video, but having trouble understanding it? FluentU brings native videos within reach with interactive subtitles.

You can tap on any word to look it up instantly. Every definition has examples that have been written to help you understand how the word is used. If you see an interesting word you don't know, you can add it to a vocabulary list.

And FluentU isn't just for watching videos. It's a complete platform for learning. It's designed to effectively teach you all the vocabulary from any video. Swipe left or right to see more examples of the word you're on.

The best part is that FluentU keeps track of the vocabulary that you're learning, and it recommends examples and videos based on the words you've already learned.

Start using the FluentU website on your computer or tablet or, better yet, download the FluentU app from the iTunes or Google Play stores.