Thank You in Spanish: 15+ Creative Ways to Express Your Gratitude

Saying thank you is an inherent human trait.

Granted, other species have their own different ways of showing gratitude, but we’re the only ones who can utter it aloud and choose the moment when and the way in which we want to say it.

In this post, I’ll teach you 15 unique ways to say thank you in Spanish!

This is the most common way of thanking someone in Spanish. It literally means “thanks.”

2. Muchas gracias — Thank you very much

When you’re very thankful, you can literally give many thanks to the other person.

3. Mil gracias — Thanks a million, thank you very much

This is quite an informal way of saying “thank you very much” with a twist. While the literal translation is “a thousand thanks,” the English equivalent would be something like “thanks a million.”

But you can also say un millón de gracias—which is literally “thanks a million”—if you’re really, really, really in the mood for thanking someone.

4. Muchísimas gracias — Thank you very much, thanks a lot

Have you ever heard of the augmentative -ísimo/a in Spanish? Since it makes everything bigger, saying muchísimas gracias makes the expression much more intense than a simple “thank you.”

5. (Muchas) gracias por todo — Thank you (very much) for everything

This is quite a nice expression and a very common way of thanking someone for everything they’ve done for us without having to be specific.

We use te with friends and family and se with people we’re not so close to.

It’s also very common to add one of two expressions to the end of this construction:

de (todo) corazón — from the bottom of my heart

en el alma — lit. “on the soul” or thank you from the bottom of my soul

7. Gracias a todos — Thanks everyone

At some point, you’ll probably want to thank more than one person. While gracias will suffice, if you want to be a bit more specific (or emphasize that you’re thanking everyone), gracias a todos is a nice simple one to know.

It also features the personal a, which doesn’t exist in English but is needed in this context!

Remember to choose the correct form of the adjective agradecido, depending on the gender and number of the speaker(s).

If you want to dip your toes in the Spanish passive voice, try this way of saying thank you in Spanish. Though the active voice is more commonly used, the passive voice can also be useful in some situations to provide different shades of meaning.

While this phrase translates literally to “very kind,” it’s a way of saying “thank you kindly,” or thanking someone in a way that implies the person you’re addressing is kind.

However, this phrase is often used where a simple gracias would have sufficed—and because it’s almost overused, the integrity of the original meaning has been watered down.

This phrase is a variation of the one above, though it carries more meaning and emphasis. While muy amable can be said offhandedly, es muy amable de tu/su parte is said with more intention and sincerity.

This is often used when thanking someone for something nice they have done for you or given to you. You wouldn’t, for example, say it to a checkout operator after buying groceries or they’ll probably think you’re being sarcastic.

In general, ¡qué lindo! (how nice/sweet) can be a nice phrase to pop into conversations and encounters to show gratitude—you just need to make sure the context is right so it comes across properly.

This is an informal phrase that literally means “you passed yourself,” however it can be used to mean “you shouldn’t have!”

Be careful though—if said with a different tone or in a different context, it can also be used to tell someone off, meaning something like “you went too far.” But if you can get the context right, it’ll make your Spanish sound nice and authentic!

14. Gracias igual — Thanks anyway, thanks all the same

Gracias igual is the phrase that you never knew you needed.

It’s not commonly taught, although it should be as it’s surprising how often you’ll need to use it!

15. Gracias por nada — Thanks for nothing

Now we’ve arrived at the other end of the “thanks” spectrum—a phrase that includes the word gracias, but isn’t actually used to thank someone.

Hopefully, you don’t need to use this one, but it’s here just in case!

Verbs to Say “Thank You” in Spanish

Each language has different ways of showing gratitude. Spanish isn’t different in this respect.

So aside from the series of common expressions for saying “thank you” above, we also have a set of gratitude verbs that you can use in order to shine around your Spanish-speaking friends.

Agradecer — To thank, to appreciate

Agradecer is an irregular verb that’s conjugated like conocer (to get to know), and even though conjugating it isn’t the main way of saying “thanks” in Spanish, I really recommend you learn how to do it.

Agradecer can be used as a normal conjugated verb or it can be the basis for the past participle and adjective agradecido (thankful) or the noun agradecimiento (gratitude).

When conjugated, it’s normally used in the first person, both singular and plural:

Le agradezco la ayuda.
(I thank you for your help.)

Le agradecemos la ayuda.
(We thank you for your help.)

Agradecido, on the other hand, appears in the expression estar agradecido (to be thankful), and it’s also normally used in the first person.

Bear in mind that agradecido is an adjective, so it has to agree in gender and number with the subject of the sentence:

Finally, the noun agradecimiento can be used in rather formal contexts. It’s not used very often in everyday conversations, but when it appears it tends to be part of the expressions mostrar agradecimiento (to show gratitude) and en/como señal/muestra de agradecimiento (as a token of gratitude).

Quiero mostrarles mi agradecimiento a todos los voluntarios.
(I want to show my gratitude to all the volunteers.)

Le envió flores como señal de agradecimiento.
(He sent her flowers as a token of gratitude.)

The verb apreciar is also not very commonly used in everyday transactions.

It’s a regular verb, so there’s no drama in the conjugation department.

We use this verb when we want to say a little bit more than just a simple “thank you.”

Apreciar isn’t just used and disposed of. When you use this verb, you explain why you’re thankful and mention the thing for which you’re appreciative.

Aprecio que hayas venido a verme.
(I appreciate your having come to see me.)

Dar las gracias — To give thanks

Dar las gracias is probably the most commonly used verb of the three on this list.

It’s used both in formal and informal situations when you want to mention what you’re thankful for.

Queremos darte las gracias por tu ayuda.
(We want to thank you for your help.)

Me dio las gracias por decir la verdad.
(He thanked me for telling the truth.)

The Importance of Saying Thank You in Spanish

We’re a social species, and as such, our interactions with other human beings are of vital importance: no matter the language you speak, expressions like “thank you” come up over and over again.

Thankfulness is a sign of good manners and of appreciation for the other person, and it’s an excellent way of making someone a little bit happier.

As I’ve mentioned throughout this post, we have different ways of thanking someone, depending on the person we’re talking to, the register and the context of the conversation. In fact, as you learn each phrase you should also learn how the phrase is used.

To get familiar with when these phrases should be used, watch how native speakers use them. If you don’t know any Spanish speakers, you can find language exchange partners online or even just watch Spanish movies and TV shows.

Some language learning programs actually use Spanish media clips to teach words and phrases in context. For instance, FluentU has a huge library of short, authentic videos—covering everything from music videos to news reports to commercials—which let you see how natives really speak Spanish.

Each video comes with interactive subtitles, and you can use the video dictionary to better understand how to use phrases like mil gracias. 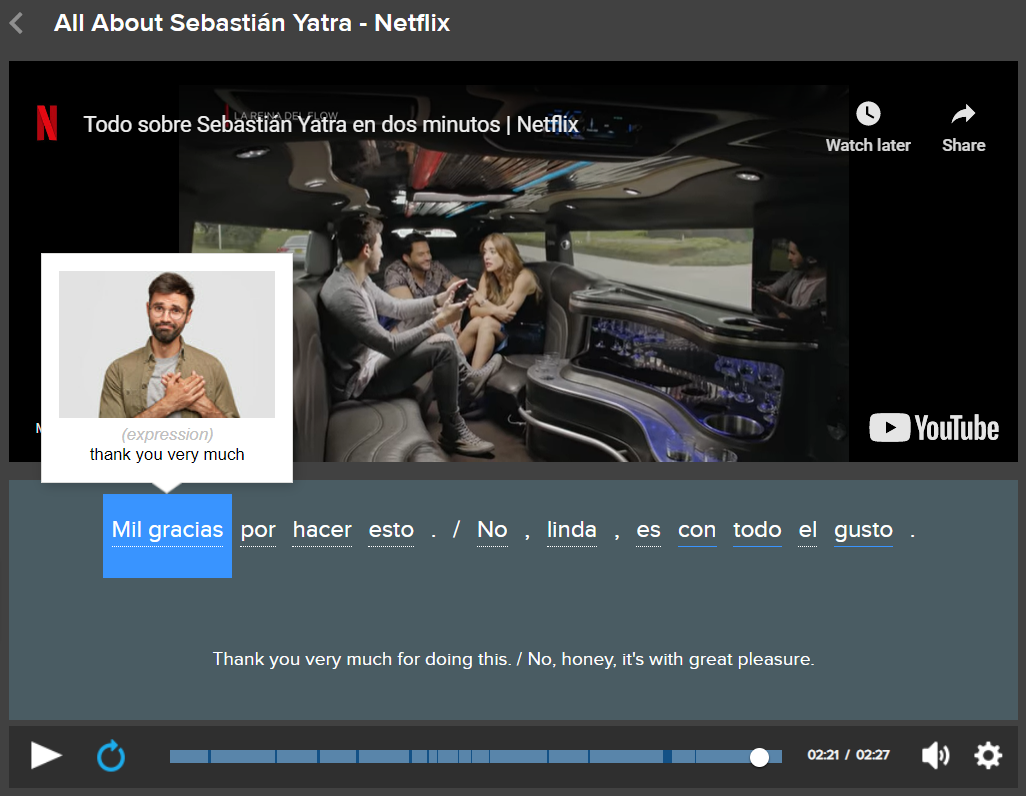 By seeing how the language is spoken in different contexts, you’ll pick up more natural-sounding Spanish. Other than the website, FluentU is also available as an iOS or Android app which makes it easier to learn on the move.

In any case, if you’re learning Spanish, sooner or later you’ll have to be thankful in the language: maybe you’ll go on vacation and want to thank the receptionist for giving you clean towels. Perhaps you’ll find a job in Argentina and want to say thank you to the person who told you about it.

No matter the situation, it’s very possible that you’ll be in need of these tools we’ve given you to say thank you in Spanish.

Saying thank you, although it sometimes seems to be a thing of the past, is nice and really shows the kind of person we are, regardless of the language we speak.

So, learn these expressions, engage in some nice conversation with your Spanish-speaking friends and put the phrases to use!

Keep being thankful, my friends, and as always, happy learning!