Imagine a world where you couldn’t talk about what’s mine, yours, ours, or theirs. It would be hard, right?

This is why possessive adjectives are so important, and it’s no different in Spanish!

Spanish has a few more forms of possessive adjectives than English, so brush up on your Spanish pronouns and genders and we can get started!

What Are Possessive Adjectives?

Possessive adjectives, as the name suggests, are adjectives which are used to show who has possession of something.

The words “my,” “your,” “our,” “their,” etc. are all English possessive adjectives that show who something belongs to:

Where are my keys?

Let’s go to their house

It’s important that you pay attention to the gender and the number of the thing being owned so that you use the proper adjective.

Here are the different Spanish possessive adjectives. Note that to make a singular adjective plural, you simply add s.

Both nuestro and vuestro change based on the gender of the thing we own. It’s important to note that this has nothing to do with our genders, that is, the gender identities of the people who are owning something.

Also remember that those plural possessive adjectives are used for when multiple things are owned, not when multiple people own something.

Here are some examples of how these short-form possessive adjectives are used, keeping in mind that they always come before a noun.

Son mis libros — These are my books

Long-form Spanish possessive adjectives are, for the most part, reserved for things like older literature, poems, or songs.

No one uses this form in everyday speech nowadays—except for sentences about certain relationships, which are equivalent to the “[relationship] of [possessive]” structure in English, as well as in some other, very specific cases. For example:

But for the sake of completeness, we’re going to share them with you anyway.

When to Avoid Possessive Adjectives

The most common mistakes made by English speakers with Spanish possessive adjectives actually involve using them too much!

Here are some situations not to use possessive adjectives:

Se rompió la pierna — She broke her leg (literally: she broke herself the leg)

¡Todo lo que ves aquí es mío! — Everything you see here is mine!

The exception to this is when you’re using two nouns to describe the same actual thing.

It can be pretty easy to get mixed up between possessive adjectives and possessive pronouns in Spanish.

The simplest way to remember the difference is to recognize that possessive adjectives describe nouns, whereas pronouns completely replace them.

El gato negro es mío — The black cat is mine

If you want to know more about possessive pronouns, check out this post.

Showing Possession in Other Ways

Although possessive adjectives are probably the most straightforward way to demonstrate possession, they are not the only way that you can do this.

As we already touched on, we can use possessive pronouns to show possession.

Note that the possessive pronouns are the same as the long-form possessive adjectives and have similar meanings.

Possessive pronoun: Ese perro es mío — That dog is mine

Another way we can express possession is with the preposition de, which means “of,” but can be placed after a noun to express ownership.

This especially comes in handy where we’d usually use su, as it can be difficult to determine who exactly that word is talking about.

If you want to see how possessive adjectives are used, you can try exposing yourself to Spanish conversation or media to watch how natives incorporate this element into their speech.

FluentU is a great resource for this as the program uses native video clips from movies, TV shows, etc. to show you how Spanish speaking natives demonstrate possession. 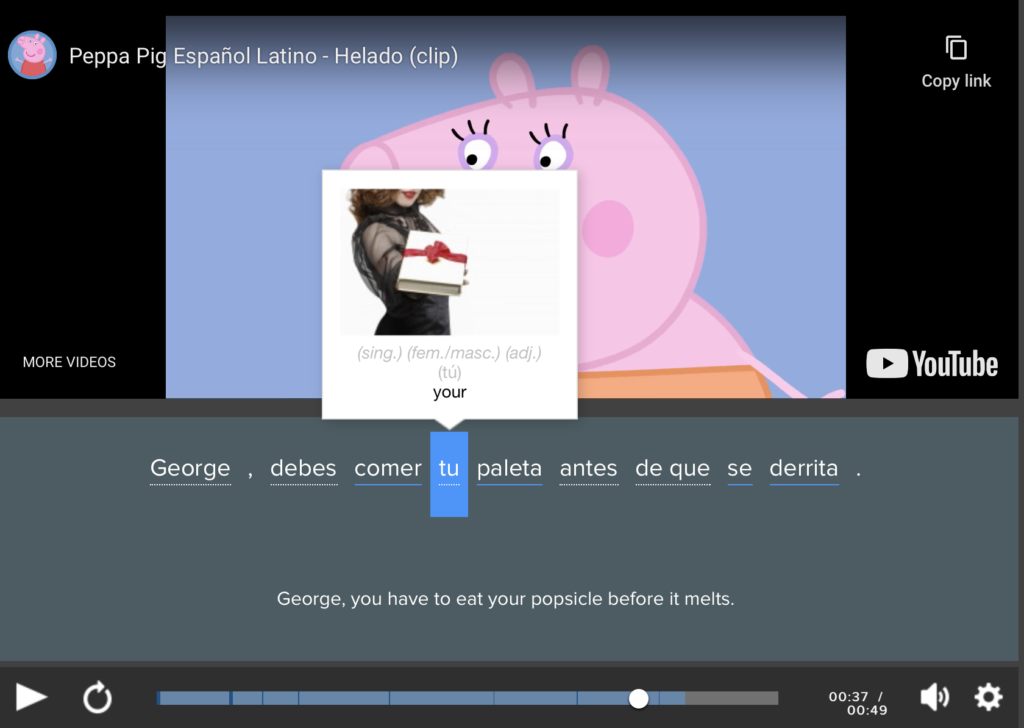 You’ll even find tools like flashcards, interactive subtitles and flashcards to boost your learning. The program is offered on both iOS and Android.

I’m guessing you feel possessive over a few things in your life as well; now you should have the vocabulary to say so!