The Personal A in Spanish: What It Is and When to Use It

In Spanish, a simple little word like a can mean many different things.

But one of the most important uses of the Spanish word a—and perhaps one of the trickiest—is the personal a.

To an English speaker, this a feels superfluous. But in Spanish, it’s very important!

Read on to learn the ins and outs of the Spanish personal a.

What Is the Personal A?

Spanish and English are similar in many ways, but the personal a is one example of a Spanish grammar rule that has no English equivalent.

The personal a is a preposition that we use when the direct object of a sentence is a person.

Confused? A simple sentence will help clarify the usage of the personal a in Spanish. Let’s take the following sentence in English:

Yo veo a Sonia.

There’s no direct translation for the personal a into English. You simply have to remember that in Spanish, when the direct object of the sentence is a human being, you must insert an a between the verb and the direct object.

The personal a is used exactly the same whether you’re talking about one person or multiple people:

When the direct object is a person but the person’s name or title begins with el, you can contract a + el to make al. For example:

Since “the doctor” is el doctor, a + el can contract to form al.

In contrast, when we use the feminine article la for a female doctor, there’s no need to form a contraction:

It’s important to note that the personal a is different from other usages of the preposition a in Spanish. (As a quick refresher, a preposition is a word that links nouns and pronouns to other words in a sentence. Some examples of English prepositions would be to, on, through, about, with, etc.)

The Spanish preposition a has a few different uses. Frequently, it’s used like the English word “to.” Take the sentence Yo voy a la playa (I go to the beach). Here, we’re not using the personal a. We’re simply using the preposition a, meaning “to.”

You may also see a used with verbs like gustar and encantar, such as in the phrase:

Check out this article on verbs like gustar for more information.

Don’t let these Spanish verbs like “gustar” catch you off guard. See how to use the tricky “gustar” (to like, to be pleasing) correctly. Then, become familiar with 14…

When Not to Use the Personal A

Don’t use it when the direct object is an inanimate object.

This preposition is called the personal a because we only use it when referring to human beings! With any other direct object, it’s totally superfluous. Compare these two sentences:

Yo veo una hamburguesa. (I see a hamburger.)

In the second sentence, since the direct object is an inanimate object (a hamburger), there’s no need for the personal a.

Don’t use it when the direct object is an animal (unless it’s a pet).

Generally speaking, it’s unnecessary to use the personal a when the direct object of the sentence is an animal.

For example, the sentence “I hear a snake” would be translated as: Yo oigo un serpiente, with no need for a personal a.

However, if the animal in question is a pet—or some other animal about whom the speaker has personal feelings—you may use the personal a.

Ella llama a su perro. (She calls her dog.)

Don’t use it when using the verbs tener (to have) or haber (there is/there are).

Yo tengo dos hermanos. (I have two brothers.)

Hay 20 estudiantes en la clase. (There are twenty students in the class.)

How to Practice the Personal A

It can be especially difficult to hack Spanish grammar concepts that have no direct translation into English. So, in the case of the personal a, it’s super important to practice, practice, practice until it simply comes naturally to you. Luckily, there are many different ways to do this!

As with many aspects of Spanish language learning, one of the absolute best ways to master the Spanish personal a is to listen to and imitate native speakers. If you spend enough time listening to the speech patterns of native Spanish speakers, at some point the personal a will just begin to sound natural to you, too!

There are many ways to listen to (and converse with) native speakers. Consider setting up an online language exchange, find an entertaining TV show in Spanish or—my personal favorite—tune in to a daily Spanish radio show and listen along.

To listen to native speakers in various types of authentic, everyday content—such as music videos, commercials and inspiring talks—you can use FluentU. This immersion program has hundreds of authentic Spanish videos for any level, so you can find the right videos for you.

As you watch, you can listen out for the personal a, or you can search for it to see a flashcard as well as videos where it appears. You can also see common phrases where it appears, which can also be incredibly useful to know. 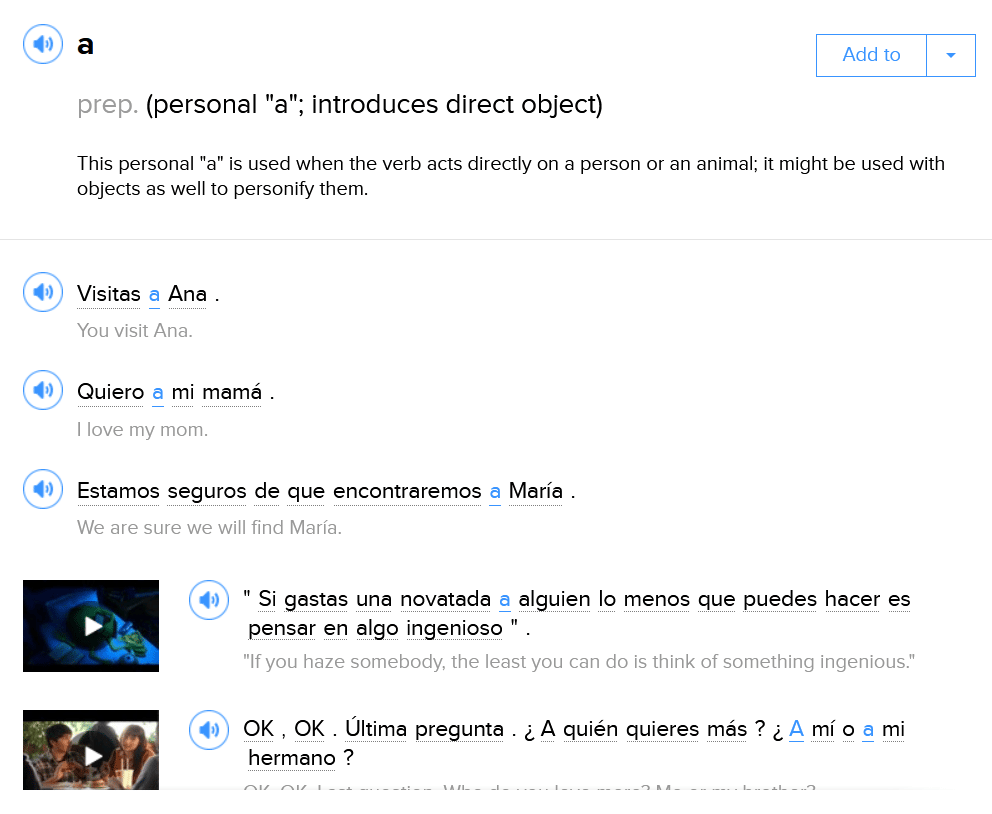 In my opinion, face-to-face language exchanges can be a great way to increase your Spanish fluency. Two of my favorite free resources for finding local conversation partners are Meetup, which can help you find Spanish exchange groups in your area, and Conversation Exchange, which can help you connect with other language learners for one-on-one practice.

If you want some more targeted grammar practice, there are many resources around the web to help you practice the personal a. StudySpanish.com features four quizzes on the personal a, so you can make sure you’re understanding the concept. If you still want more practice, you can check out this quiz on 123TeachMe.com

Or maybe you’re more of an audio learner? The Spanish Dude has a great video on the personal a, which comes with a worksheet (and answer key!) to help you understand this grammar concept.

I love learning Spanish refranes (sayings). They are one of my favorite ways to practice Spanish grammar because they also give me a window into Spanish-speaking cultures. Plus, some of them can be quite poetic, which means that figuring out their true meaning is a bit like deciphering a puzzle!

Once you commit a Spanish saying to memory, you can use it to remind yourself about key grammatical concepts. Luckily, there are many Spanish refranes that make use of the personal a. Here are a few:

Translation: Love does not respect the law, nor does it obey the king.

Translation: He who steals from a thief has one hundred years of forgiveness.

Meaning: If you do something mean to a person who isn’t nice, your mean action will be forgiven.

Translation: Do good without looking at whom.

Meaning: Do good things, regardless of whether or not others will be aware that you’re doing them.

Meaning: We only know who our true friends are when things are going wrong.

Translation: One grain doesn’t make a granary, but it can help a friend.

Meaning: Little things might seem unimportant, but every little bit can make a difference in some way.

These five phrases are great examples of the usage of the personal a. If you commit them to memory, they can help you remember to add a when your direct object is a person.

Hopefully, this article has helped clarify a somewhat tricky vocabulary concept for English-speaking students of Spanish.

Now that you’ve learned about the personal a, you’re going to start noticing it being used everywhere—and you’ll be able to work it into your own Spanish as well!