Luckily for me, there’s one method of doing this that’s built right into Spanish grammar: Contractions!

There are only two Spanish contractions—al and del—and learning them is an integral part of speaking correct Spanish.

The grammar rules behind Spanish contractions are simple to learn. In fact, the hardest part of learning these contractions is remembering to use them in your daily Spanish speech!

What Are the Spanish Contractions?

The Spanish language has two contractions: al and del.

Al is a contraction of the two Spanish words a and el, and can mean many things, such as “at the” or “to the.”

Del is a contraction of the words de and el. It can mean “from the” and “of the,” among other things.

In English, contractions are optional. For example, in English you can write “do not,” and it’s every bit as grammatically correct as “don’t.” In Spanish, this isn’t the case. If you have the words a and el or de and el next to each other, you ­must contract them. Saying voy a ir a el parque (I am going to the park), for example, is grammatically incorrect.

Note that contractions only happen with the article el. You’ll never see a contraction with the other articles: la, los and las.

When Not to Form a Contraction

Remember two sentences ago when I said that contracting a+el and de+el is obligatory? Well… let’s back up a second. There are two important exceptions to keep in mind.

First off, don’t form a contraction if the el is part of a proper noun, such as a city name or book title. Many cities and towns in the Spanish-speaking world—and even some countries—start with articles. Take, for example, the Argentinian town El Chalten.

The same happens with book and movie titles that start with el.

The second time that you shouldn’t form a contraction is when you’re dealing with the pronoun él rather than el.

You’ll frequently see the word él after the prepositions a and de. However, make sure to pay close attention to that accent mark and avoid contracting.

How to Use Al And Del

It’s all well and good to know that you need to contract a+el and de+el. But what use is that to you if you don’t actually know when to use a and de? We’ll break it down for you here.

When to Use Al

To describe motion towards a place

Like the English preposition “to,” use a to describe somebody moving towards a place. When that place happens to begin with the article el, you get al.

Use a like the English “at” to describe a location.

Te espero al final de la cola.
I’ll wait for you at the end of the line.

To describe the end of a period of time

Like the English “to” or “until,” use a to describe when a period of time ends. Again, if your ending point happens to begin with el, use the contraction al.

To introduce an indirect object, after certain verbs

Me acerco al coche.
I approach the car.

In Spanish, you need to use a to introduce a direct or indirect object if that object happens to be a person. There’s no equivalent to this in English, so it’s a grammar rule that you’ll just have to learn and adjust to in Spanish.

Vi a Joaquín en el supermercado.
I saw Joaquín in the supermarket.

Note: There are many other usages of a—such as in time expressions and before infinitive verbs—but since those never match up with the preposition el, they’re not relevant to this article. If you want a more thorough run-down of when to use a, click here.

When to use del

To describe possession or ownership

In Spanish, there’s no equivalent to the English possessive ’s. Instead, to express possession, write the object, followed by de, followed by the owner.

When talking about where you or somebody else is from, use de. In some cases, this will require you to use the contraction del.

To talk about the beginning of a period of time

Ella va a estar aquí del principio de junio a finales de agosto.
She’s going to be here from the beginning of June until the end of August.

To introduce an indirect object, after certain verbs.

Like with a, the preposition de is sometimes an integral part of verbs. One example is the verb acordarse de (to remember).

¿Te acuerdas del chico que conocimos en la feria?
Do you remember the boy who we met at the fair?

Again, there are many uses of de that aren’t covered here because they rarely or never turn into del. For a more thorough lesson on de, click here.

I always find that learning some short, snappy phrases helps me remember new grammar rules. If you memorize these phrases and repeat them to yourself often enough, the grammar aspect will soon become second nature!

Plus, in the meantime you’ll be learning new vocabulary and having a fun time trying to understand Spanish proverbs. Here are a few that use al and del.

Actual meaning: When you’re desperate, you’ll take what you can get even if it isn’t that great. Think of the English phrase “beggars can’t be choosers.”

Literal meaning: He who takes what he gives goes to hell.

Actual meaning: This one’s pretty straightforward! If you give something to somebody, you can’t change your mind later on and decide to take it back, or you’ll be considered a bad person.

Actual meaning: This one’s similar to the English phrase “out of sight, out of mind.” It can specifically refer to a loved one who’s absent and therefore forgotten.

Literal meaning: From the child a kiss, and from the old man advice.

Actual meaning: One of children’s best qualities is that they’re unfailingly loving and caring. On the other hand, old people are wise. Therefore, you can get unconditional love from a young person but you should seek out somebody older and wiser if you truly need advice.

Actual meaning: Just because somebody says they’ll do something doesn’t mean they’ll necessarily follow through on their word. It takes a lot of effort to put what you’ve said into action.

A good method is by listening to Spanish audio clips or watching Spanish videos. The more varied the content, the more you can become familiar with proper contraction usage.

One resource for this is the language learning program FluentU, which has short, authentic Spanish videos like news segments, commercials, movie clips, vlogs and other native Spanish-language media. The program equips these videos with interactive subtitles that supply word translations, grammar information, example sentences and even example video clips. 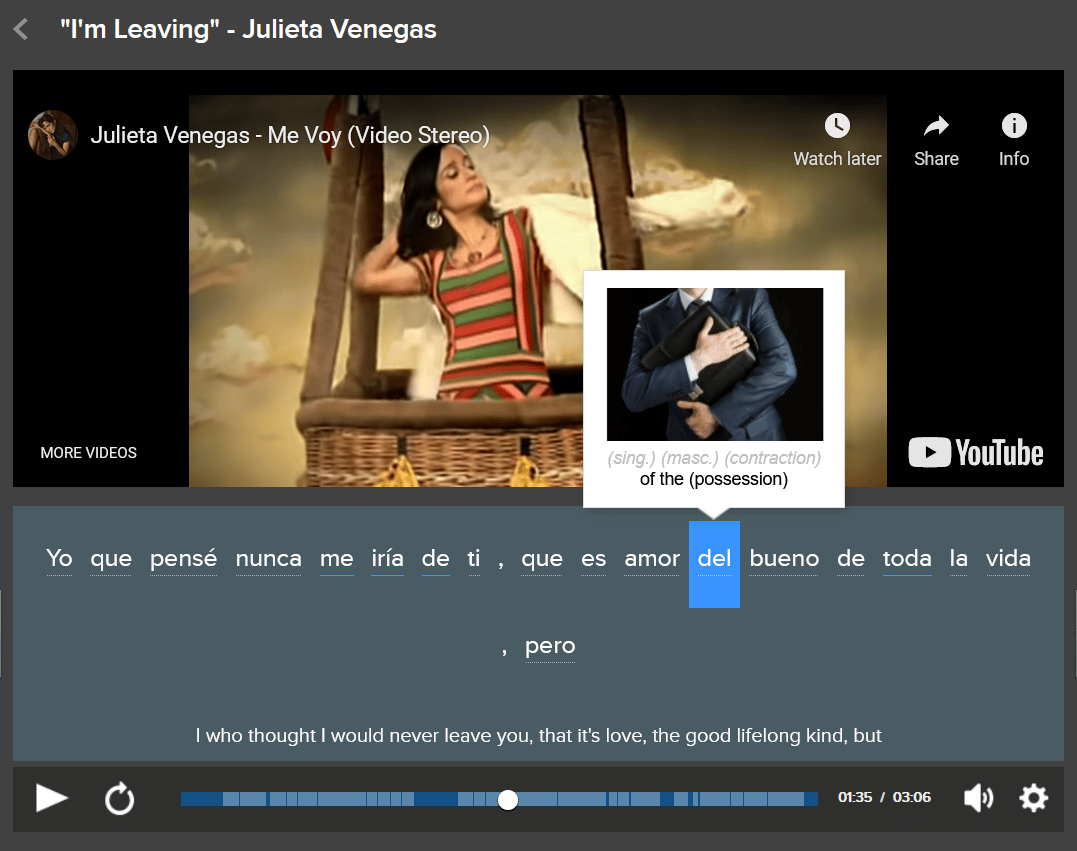 So keep your eyes and ears peeled for Spanish contractions, wherever you encounter them! Over time, you may even craft your own little tricks for remembering Spanish grammar rules.

So, the next time you ir al bar (go to the bar) with your Spanish-speaking friends, you can think to yourself:

Me acuerdo del artículo que leí en FluentU! (I remember the article I read on FluentU!)

Spanish contractions aren’t hard, and speaking them will make a great deal of difference in the fluency and correctness of your Spanish.

And why not try out one of these Spanish sayings while you’re at it?