Dominicanismos: 38 Dominican Slang Words for Your Next Caribbean Getaway

Ask any Spanish speaker and they’ll tell you: Dominicans have their own way of doing things.

Their language is a cool fusion of indigenous and European languages like no other.

If you want to talk to natives and have your message received, you absolutely must know Dominican slang.

And if you want to learn even more essential slang, check out this post, where you’ll find all our Spanish slang posts:


Speak Like a True Spaniard: 14 Spanish Slang Phrases You’d Be Crazy Not to Know

Heading to Spain? Want to sound like the locals? Here are 14 Spanish slang phrases you’re gonna hear all the time in Spain!

This means to acclimatize and get used to your surroundings. Shouldn’t take long in the beautiful Dominican Republic.

If you’re alebrescado, it means that you’re very excited and anticipating something. You might tell locals how alebrescado you are to be in the Dominican Republic. Be careful using alebrestado in other countries, as this can have some different meanings when you reach the mainland of Latin America, depending on the country.

Can be used as a description of a thing that’s cool, just like Colombians use it, but if someone is a bacano, it means that they’re good at something really difficult. You can only hope all the locals are shouting this at you when you try something difficult for the first time.

This is a semi-derogative word for a child, so don’t go using it for your neighbor’s kids. Children that are badly behaved and generally annoying definitely deserve the term carajitos, so you can reserve it for those who are running around the tables while you’re trying to eat out!

A great example of an anglicism that has changed in sound and meaning, this one comes from “cheers,” or possibly even “church,” but refers to a good time or a party. If you’re lucky you might get to spend the evening at a Dominican chercha!

One of my favorite things to hear Dominicans say, it’s an anglicism for relaxing in a very chilled and lazy way. Possibly by the pool, with a drink in hand.

Do you want try something while exploring this place, but maybe just a little bit? Then use chin, as in Dame un chin de jugo (Give me a little bit of juice).

A small corner store, the kind in your neighborhood, especially where you’ll run when you’re out of milk or craving a soft drink.

A taxi, something you’ll likely want to take at some point exploring the country.

A Dominican word for something useless or nonsense, something you will throw away or when someone talks without really knowing too much what they’re talking about.

If the weather is really hot, you’ll definitely want one of these! Usually translated as “Popsicle,” although it can sometimes be a frozen drink. It’s also pretty fun to say and almost onomatopoeic of squeezing a Popsicle from the wrapper!

A kind of anglicism from “very nice,” this serves as any kind of affirmation or approval. If you’re modeling new clothes and are greeted by this phrase, you know you’ve mastered the Dominican cool.

This refers to that feeling of having eaten too much and is a very useful slang word when eating out. Think of it as a Dominican slang word for llenura.

A very casual word, translates to “okay” or “alright” and one that you’ll definitely hear among friends.

Your pana is your buddy, your pal, your bro—take your pick! A term of endearment and closeness but also a cool word to use, you’ll be using it with all your new friends in the Dominican Republic! This word is also used in Venezuela too to mean the same thing.

This is essentially someone who’s very chatty, literally someone who has a long tongue, meaning it’s never in their mouth because they’re always talking.

Means “tell me about…,” and once said, you’re then expected to launch into a descriptive and entertaining story. It literally means “give me some information.”

As noted earlier, this one means “what’s up?”. Dominicans usually linger on the last syllable, especially if they really want an answer, as they usually do. Dominicans are polite and it isn’t just a greeting as in English. Literally it means: “tell me so that I can see.”

This means “to brag and exaggerate” and literally means “to brush,” i.e. to embellish something.

This is the contraction of “para adelante,” meaning “forward” or “ahead.” It could mean to head over to somewhere else or to move on to new people or partners.

Respectively, these words are used to affectionately refer to your mom and dad.

Means “What’s going on?”, and it will often be used in a casual way as a greeting or a question. Wha is an anglicism from “what.”

Your sweet little jeva/jevo is your girlfriend/boyfriend. It’s an affectionate term. Jévon is often used to describe a pretty girl, which is quite close to jevo, so don’t mistake the two!

This word is used to refer to a trash can or garbage bin. Here you can see more influence from English as it sounds a little bit like “safe can.”

To be chulo(a) is to be cute or cool. It can be used to refer to a person or a thing such as a camisa chula. This word is also useful in other countries in the Caribbean, and especially in Spain!

To be manso is to be calm, definitely something you want to be when in the Caribbean.

Hilariously, this means a gold-digger and comes from the phrase “hanky-panky.” Make sure you remember this one because if someone tells you that someone else is a sanky-panky you’ll want to know what that means to avoid any mishaps!

This can be used to refer to a kind of hustler with street smarts. They’ll do anything to get what they want, so you’d better watch out!

This means “I’m stylish” or “I’m trendy” and is definitely something you want to remember for when you’re out shopping. Literally means “I’m ahead.”

This one’s an anglicism from “polo shirt” and means the same as the word it came from!

This word describes fruit that’s going bad, and nobody wants to buy that.

One of the most commonly used words among Dominican youth, it means great/cool and comes from “neat.” If something is nítido, you want to buy it.

This word comes from “t-shirt” but doesn’t mean that. It’s actually a rugby/football jersey. If you want one of those, ask for a tichér.

This comes from “corn flakes” but refers to any cereal. You’ll hear this in Central America, too.

A llaga is a useless vehicle, a relic or a collectible possibly.

A very useful word to learn, guagua is a bus. You’ll also hear this word used in Cuba.

A trademark derived word for an SUV.

Whether you want to use this word or not, you’re definitely going to hear it if you’re speaking to Dominicans. Like a lot of slang words, it doesn’t translate particularly well and mastering it is quite a fine art. Vaina can mean:

Something unknown or unmentionable (this could be neutral or negative)

A thing or situation that’s unpleasant

To look down on someone

Basically, vaina is either a neutral or negative term, never positive. Educated people are less likely to use vaina in a neutral way, but will almost certainly use it in a derogatory way at some point. You’re probably better off using it only when you mean offense or insult at the beginning, so as not to offend someone when you only mean indifference.

Dominicans aren’t big on spelling, so you may see it written out as baina.

Why and How to Learn Dominican Slang

Slang is used in regular Dominican conversations a lot more frequently than it is in most other Spanish dialects. They have many friendly phrases like ¿dime a ver? (what’s up?) that are essential for chatting with locals. They use anglicisms in fresh and hilarious ways and have the most beautiful, untranslatable vocabulary.

Using standard Spanish with Dominicans is like asking Picasso to paint in black and white!

Dominican slang has quite an informal register, so it’s not uncommon to use slang with people you’ve only just met and it’s certainly not considered uneducated. Dominican speech is very fast, so you might want to make sure you have the right word by rephrasing the sentence as a question and confirming, ensuring that you don’t use slang mistakenly in the wrong context.

Once you’ve mastered the lingo, Dominicans will be delighted to converse with you and to help you navigate the nuances of Dominican slang. If you can get the hang of their fast speech, passionate disposition and interesting articulation, you’ll certainly learn a lot about creative expression.

To hear this lingo in action, we recommend a stop by Gritty Spanish (assuming you’re all grown up and okay with some mature language). They often incorporate Dominican slang and accents into their dialogues, so it can be a fun—and slightly offensive yet humorous—way to hear your Dominican Spanish in action, used by native speakers in real ways.

You can also find some authentic Dominican videos on FluentU, which teaches Spanish through native videos like music videos, movie clips, vlogs and commercials. Videos include dual-language subtitles that can be clicked for a definition or more video examples.

Some of the Dominican content included on FluentU is a parody about the iPhone 5, an interview video that asks Spanish-speaking people where they’re from and an informal interview vlog with a Dominican about her country’s food and culture. 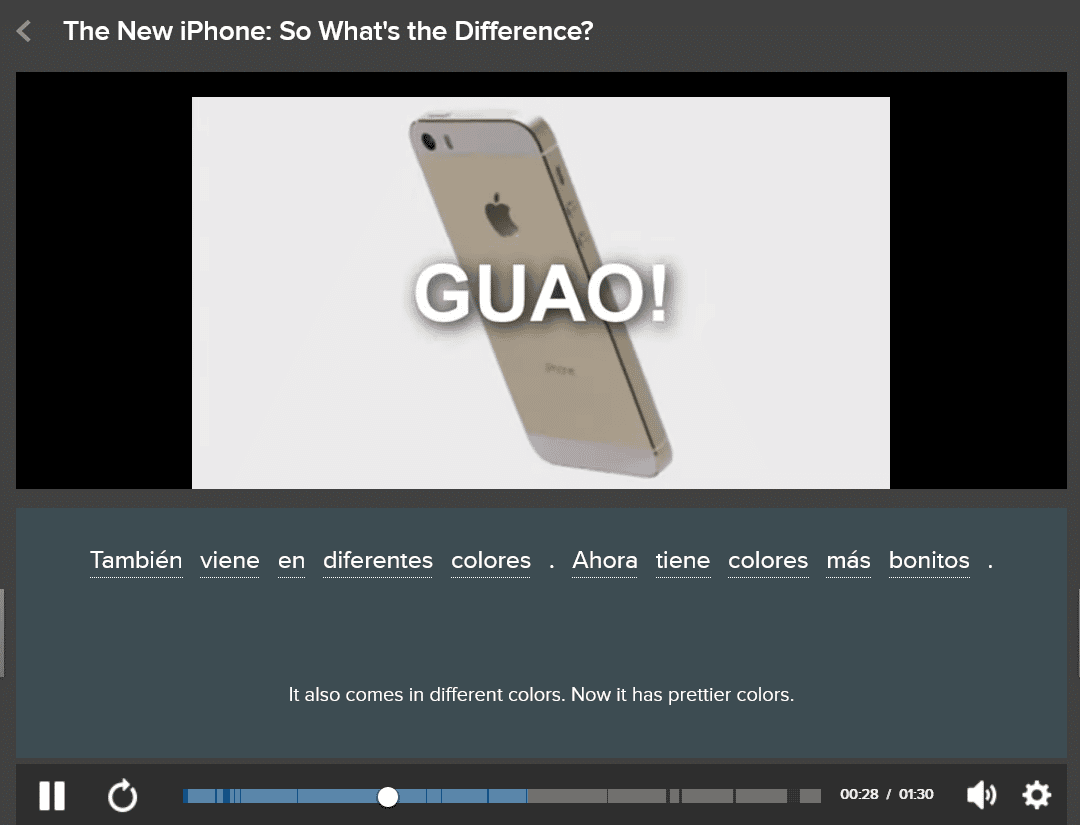 FluentU lets you search for words to see videos that use the words, and since the dictionary is contextual, you’ll always know when a word is being used as slang. Learn these words through quizzes designed to optimize your learning through spaced repetition.

Practice your Dominican Spanish skills before you head out—after all, what use is knowing slang if you can’t use it in a sentence?

Now that you know all the Dominican slang you need, it’s time to book a trip!