Japanese Formality: Everything You Need to Get Started with Formal Japanese

Japan is famous for its formality and politeness, and Japanese people have earned a reputation for having excellent manners.

This system is also known for being complicated. Great care is taken to ensure that harmony is maintained in Japanese society, so Japanese people avoid doing anything that could potentially disrupt it or cause someone to lose face. There seem to be rules for every little thing- how to speak to your bosses at lunch, how to stand on the subway, how to throw away garbage… I even saw a TV segment about how to politely eat a fish!

So how is a newcomer to the Japanese language supposed to navigate Japanese formality?

Fortunately, if you’re not Japanese, you’re not expected to know every little detail of how formal Japanese works. This “gaijin pass” (foreigner pass) can come in handy in many situations where you may be lost on what exactly to do. However, knowing the basics of Japanese politeness will earn you points with your Japanese friends and colleagues.

And it all starts with the language.

There are plenty of resources available to help you learn how to speak formal Japanese, and I’m here to introduce a few of them to you. With a little digging and a lot of hard work, you’ll be able to master Japanese formality in no time!

Japanese Formality: How to Be Polite in Japanese

Every culture has different standards for being polite, and Japan is no different. So how does politeness work in Japanese society?

First of all, social hierarchy, or social rank, needs to be kept in mind at all times. Where you stand in relationship to someone else determines how you will speak to them.

The basic pecking order puts parents above children, teachers above students, bosses above employees, and elders above younger people. When Japanese people speak to each other, they consider the rank of the other person and adjust their language accordingly. For instance, you wouldn’t talk to your teacher in the same way you would talk to your little sister.

How well you know the other person also plays a part in politeness. Families tend to speak more casually with one another, while strangers will use more formal terms. Good friends will drop the formalities entirely and throw all kinds of slang around.

Behavior and mannerisms are important in showing politeness, too. However, what two people think of as polite may be very different!

If you grew up like me, you were told not to slurp your soup or noodles, since making noise while eating is rude. On the other hand, slurping is considered normal in Japan! Japanese people will slurp bowls of miso soup as well as noodles, which can be a bit surprising if you’re not used to it. In my Japanese dorm, it took a little while for me to adjust to the sound of my roommate slurping up her cup noodles in our kitchen. Don’t take this as a sign that you should eat noisily, though—loud chewing is just as impolite in Japan as it is in the West.

Bowing is perhaps the most famous polite gesture done in Japan. But did you know that the type of bow used actually affects how polite it is?

A short bow at about 15° is appropriate for a casual greeting. A 30° bow is used for greeting strangers and bosses, and a 45° angle conveys deep respect, or an apology. The length of the bow also matters!

Of course, formality and politeness have their own special forms in Japanese polite language. This 敬語 (けいご, polite language) is a crucial aspect of Japanese communication. 敬語 utilizes humble and honorific forms of verbs in order to exalt the person you’re talking to and humble yourself.

As mentioned earlier, hierarchy comes into play in all aspects of communication, and this especially applies with 敬語. For example, a business owner would speak more directly to one of his employees, since he’s at the top. However, when he’s meeting with a customer, his speech will become more formal and humble, in order to honor the customer.

Japanese people begin to learn this naturally once they hit middle school and have to start addressing their 先輩 (せんぱい, senior/upperclassman) with more polite language.

Now, just because Japanese language revolves around politeness doesn’t mean that they never relax. In fact, being informal is also a way of being polite. Your friends won’t like you speaking in です・ます form constantly, so it’s best to know how to speak casually so you can fit right in as you catch up on the latest gossip with your friends at a cafe! 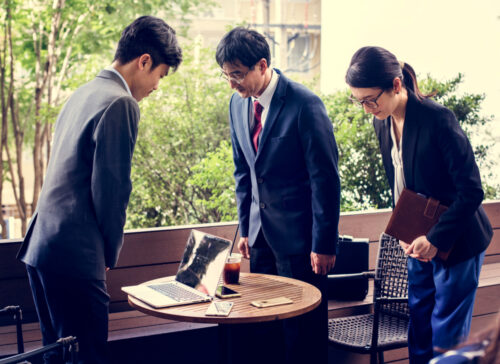 Depending on the situation and the statuses of those involved, the type of formal Japanese you use will be different. For everyday interactions with strangers, standard 丁寧語 will do just fine. When speaking to a boss or a teacher, 尊敬語 is used to exalt them and their actions. And if you’re talking about yourself, 謙譲語 will knock you down a few pegs, making you sound modest.

So, where do we start? Why not from the top?

First of all, how do you introduce yourself? Well, that depends on the situation. Meeting new people at a bar is different than exchanging greetings at a company luncheon. Make sure you study all the basics of introducing yourself in Japanese!

After you’ve introduced yourself, it’s time to make a good impression by speaking politely. The standard です・ます form is appropriate regardless of the status of the person you’re speaking to. If you’re asking directions from a stranger on the street, this form is your safest bet.

When your Japanese friend introduces you to their friends, it’s also appropriate to use polite forms. You don’t know these people, after all! However, they may switch to casual form after a bit, in which case you might want to change gears as well.

In the office, usage of polite forms is standard. No matter how well you may get along with Mr. Tanaka from accounting, so long as you’re at work, you two will be using polite forms with each other. Save the informalities for the nomikai after work!

You can’t talk about Japanese without coming across honorifics. From the standard さん (Mr./Ms.) and 先生 (せんせい, teacher) to the more unfamiliar 部長 (ぶちょう, department manager) and 閣下 (かっか, your excellency), there’s an honorific for every position in Japanese society. When speaking about someone, knowing what honorific to use is a must. So how do you figure it out? First, you’ll need to cover all the standard Japanese honorifics, and once you’ve got that down, get ready to challenge advanced honorifics!

However, if you’re in a casual situation with a friend, or if someone wants to get closer to you, they may bring up 呼び捨て (よびすて, dropping the suffix). This means that the person you’re hanging out with really likes you and wants to do away with the formalities of honorifics. When my Japanese friend said she wanted us to stop using さん, I was honored that she considered me to be that close!

If you’re in a business situation, the rules will be a little different. The Japanese business world is extremely strict and has rules for every single social interaction, from bosses to upper management to speaking to representatives of other companies. So you’ll need to brush up on specific business Japanese vocabulary.

Oh, 敬語, why must you confound us Japanese learners so? Don’t worry, even native Japanese struggle with this system of formal speech in the workplace. However, 敬語 is important, and by mastering Japanese 敬語 (keigo), you’ll not only have greater success navigating the office, but perhaps you’ll have a bit of a one-up on your Japanese colleagues!

Regardless of the level of formality, an easily overlooked yet crucial part of Japanese conversation is あいづち (conversational noises). Employing あいづち lets the other person know you’re listening, and they’re much more frequent than the similar “uh-huh, yeah” in English. In fact, its lack of usage among Japanese learners (especially English speakers) is more frustrating to Japanese people than any slip in formality! So do your future Japanese conversation partner a favor and get familiar with あいづち (aizuchi). 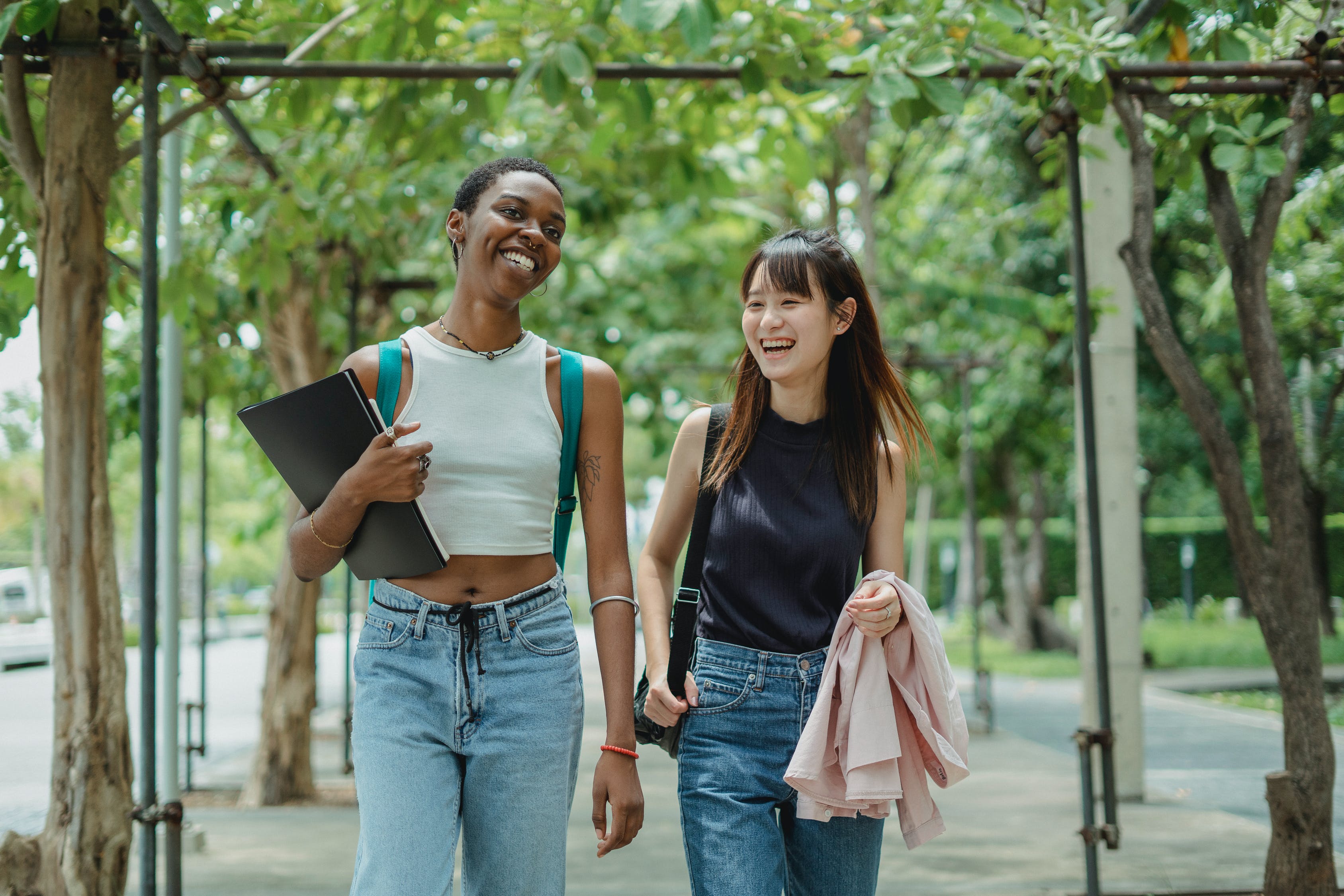 Now that the formalities are out of the way, it’s time to relax! When you’re with friends or out bar hopping with coworkers, it’s time to drop the polite talk and speak casually.

Japanese casual forms are not often taught until later on in classroom lessons, but you’ll see them just as often as formal forms. Comics, social media, and even some ads use casual forms— not to mention people hanging out in downtown Tokyo— so they’re a must-learn! Getting familiar with informal Japanese is crucial to obtaining fluency, as well as being able to interact with people on a more personal level.

Every language has its own slang, and Japanese is no different. If you’re hanging out with friends, you’ll hear countless exclamations like やべー, and you’ll need to know what they mean! Like English, wide varieties of slang words are used to describe things in everyday life, and some of the unique Japanese slang phrases will give you an insight into casual social interactions.

The Japanese language has a huge presence online, with an internet-exclusive speech style exclusive to boot. From Twitter to Youtube to Instagram and beyond, you’ll encounter dozens of unique phrases. Make sure you brush up on your Japanese internet slang before navigating the online world.

Onomatopoeia comes up all the time in casual speech. There are countless types to describe all kinds of sounds, feelings, and situations. Many of them don’t translate well into English- they’d need a whole sentence to describe their meaning! But don’t panic. Learning Japanese onomatopoeia is a whole new adventure, and a great way to find descriptions for feelings or sensations you never could put a word to. You may even find the perfect word to express the feeling of blood draining from your face when confronted with all those kanji!

The Special Formalities of Japanese Dialects 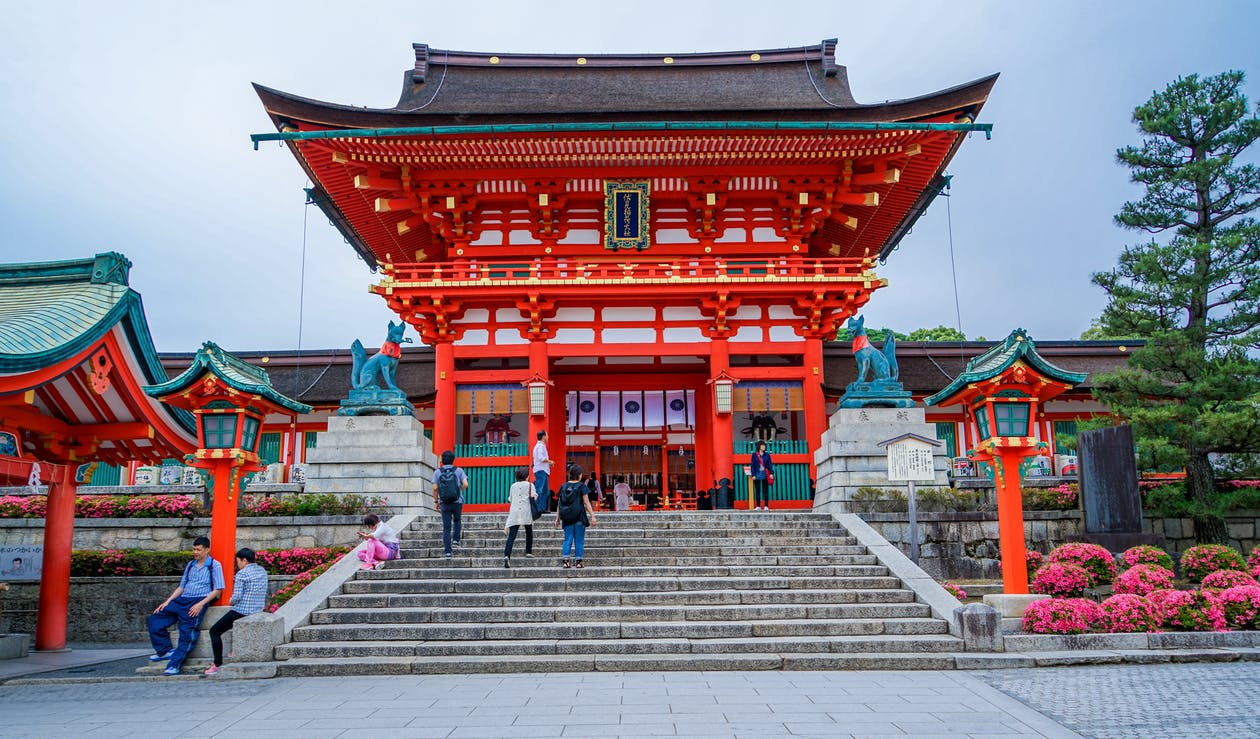 All across Japan, you’ll find different dialects of Japanese. Some of the vocabulary and grammar used within them differ from standard Japanese, and this includes formal forms. Though most formal ways of speaking are similar to standard Japanese, simply combining the local dialect with です/ます, some special formal forms do exist.

It also has some unique forms of formal Japanese. For instance:

Kyoto Dialict is similar to Osaka Dialect in formal language, but some uses are slightly different:

Other dialects have different sounds as well. For the Hakata dialect, listen for あ, か, と, よ, and ば sounds. In Hiroshima, あ, お, and え will greet your ears.

As you can see, there are many layers to Japanese formality. How you speak depends on the situation, the status of the people talking to you, how close you are with your conversation partners, and even what region of Japan you’re in.

While it’s easy to be intimidated, once you break down the different aspects of formality, it becomes much easier to study. And as a foreigner, you’ll be given a break on the minute details. Japanese people won’t expect you to master the precise angle of bow to give to the manager of one of your company’s branch stores. However, any sincere attempt to be polite is extremely welcome!

So what are you waiting for? Get out there and explore all that Japanese formality has to offer!