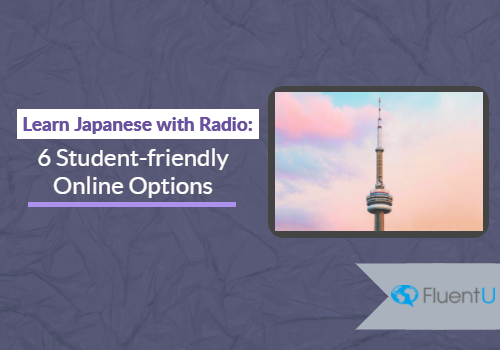 Can you sense all the great Japanese learning opportunities around you?

They’re literally in the air…waves.

But it’s not surprising if you’ve never noticed them.

In this day and age, radio has unfortunately become somewhat forgotten.

We tend to lean towards TV or the internet for fun and leisure, ignoring our good old friend the radio.

Radio is a great thing, especially if you’re studying a foreign language.

Hey, if you prefer learning Japanese from TV, music, anime and such, that’s great!

But radio has its own unique benefits.

You get to listen to an endless stream of all kinds of discussions on all kinds of topics, which is really helpful for expanding your vocabulary as well as your mind.

On top of that, it’s an easy way to immerse yourself in aspects of Japanese culture you may miss elsewhere.

There are even some radio stations that offer features especially of interest to Japanese learners.

So go ahead and take a look at these Japanese radio resources we picked out for you, our fellow learners!

Before we get started, I just want to point out that these radio stations aren’t necessarily the best ones in Japan. However, as far as studying Japanese goes, these stations have proved to be the most helpful, to me, at least.

Having said that, let’s talk about Kishiwada!

The first one on our list, as well as my personal favorite, this radio station from Osaka gives off a great vibe and it never gets boring. It is from Osaka, after all, so I guess they don’t even know how to be boring there.

Anyway, the station concept is something like community radio, and it has a wide variety of shows that broadcast daily. You get to listen to talk shows, music shows, news and more.

To summarize, this station is helpful for Japanese learners because of these three things:

As far as recommended shows go, I’d suggest listening to this station from around 7 A.M. to about noon, Japanese time. That way, you’ll get to listen to news, talk and some music as well. Great for expanding your vocabulary!

You’ll also get a chance to hear how Japanese people speak English, since one show plays only good old American jazz records! I won’t tell you the airing time for this one, though, just so I can leave you with a small surprise.

The best part about this station is the fact that you can listen to it anywhere at any time, as long as you have an internet connection.

Their online streaming link is here and you can listen to it using a computer, Android or iOS!

Also known as 816.fm, this one is something exceptional. The station seems to be there just for you to benefit from it. From shows that help you study, to shows that cheer you on to follow your dreams. Honestly, I haven’t heard anything else like it.

Like most Japanese radio stations, this one plays only music at night, with regular broadcasting during the day. I suggest listening to this one from around 10 A.M. to about 3 P.M. Japanese time. Every day is a little different, but the shows are mostly about relaxation and self-improvement. You can see the timetable here.

Also, from Monday to Friday at 7:45 A.M. and 5 P.M. they broadcast a short English lesson, called ひとみのワンポイント英会話 (ひとみの わんぽいんと えいかいわ), or “Hitomi’s One Point English Conversation,” which can be helpful for those of us who study Japanese.

In order to listen to this one on your phone, you’ll have to download a third-party app. I suggest using this one, since it’s free and very reliable.

However, you can also listen to it on a computer from this link without any problems at all. You just have to click the NETラジオ (NET Radio) button, and then the パソコンで聞く(Listen on PC) button.

Chupea is pretty much the same type of radio station as Kishiwada. They broadcast news, talk shows, music and so on.

So why did we put two similar stations on this list?

They aren’t exactly identical, that’s why.

The first difference between them is very simple: Kishiwada is from Osaka and Chupea is from Hiroshima. These dialects are different and knowing both of them is very helpful for Japanese learners. Japan is full of different kinds of dialects and plenty of them are extremely difficult to understand. However, these two are among the not-so-hard ones and you can learn them in time.

The second difference, also helpful for those of us who study Japanese, are two shows Chupea has: One is for people over 50 years old, and the other one is for young people, mostly teenagers.

Try listening to both of them in order to notice the difference in vocabulary, grammar and mentality between young person talk and middle-aged person talk.

You can listen to the stream on their official website even from your phone.

This one is a little bit different from the others on our list. It’s not a normal radio station but instead a resource that lets you listen to Japanese music.

Choose between pop, rock, “cute” music, popular music in Japan, Japanese club music, classical Japanese music or “blossom season-themed” music, whatever that is. Once you choose, the music starts playing.

Even though it doesn’t have talk shows, news, etc., this resource is still beneficial for Japanese learners since you can learn a lot of words just from listening to song lyrics. Not only that, but you can also remember lyrics more easily than other language formats later on—just remember the tune and the melody, and the words will come along with it.

The link to their website is here, and you can listen from your phone as well.

You may already know about NHK and their radio stations. NHK is Japan’s national public broadcasting organization. That means that their stations cover news, talk shows, educational programming, entertainment and so on.

If you’d like to know more about their radio stations, programs and features, you can find plenty in this post.

Right now, though, we’ll be introducing you to a special feature that’s especially great for learners: their online Japanese lessons!

At this link, you can find 48 amazing lessons that depict everyday situations involving Anna, a schoolgirl in Japan. Each lesson has written-out dialogues you can listen to, grammar explanations and a recording with explanations in English. You can also do a quiz or a review, check out the hiragana and katakana list, play back some words and more.

Just dig in and enjoy!

This one is on our list for one reason and one reason only. The magnificent enka, or traditional-style popular ballads that are so beautiful to listen to.

Tune in any day at around 6 P.M. Japanese time to enjoy this amazing and wonderful musical art. This one is all about enjoying some fine art, because everyone needs a break from studying once in a while!

In order to listen to this station you’ll need a computer. Find the station on this list and start your relaxation therapy!

Each of these stations has some unique features, and each one is great in its own way.

We made sure to include stations from different dialect regions so that you can hear the differences and learn them.

Listening to radio in a foreign language can be somewhat difficult, especially for new learners, but don’t get discouraged.

Continue with your listening and, soon enough, you’ll understand everything that you couldn’t before!