You’re supposed to be studying for a kanji test, but instead you find yourself at the local karaoke joint.

You’re belting out the lyrics to a J-pop hit with a crisp can of oolong tea in your hands.

How did this happen again?

You’ve always performed pretty well in your Japanese classes without breaking a sweat, much to the surprise of your friends and classmates. Considering how little time you devote to actually studying, it doesn’t quite add up. You do spend hours upon hours immersed in Japanese pop songs and anime anthems, but that doesn’t count, right? You’d be surprised.

If this doesn’t sound like you at all, and you’re just thinking how jealous you are of that casually awesome student in class, there’s a good chance they became so naturally good at Japanese by focusing more on fun than formal study—or they at least blend the two.

In fact, I’m willing to bet they’re at home blasting J-pop while cooking dinner as we speak, giving themselves even more of a competitive edge for class.

Believe it or not, you can get on their level. It’s all a matter of how you study.

Learning can be divided into two main categories: formal and informal.

Formal learning encompasses the typical instruction one receives while in an academic institution.

Schools, universities and colleges usually structure learning around a curriculum that has core objectives students need to meet upon the completion of the course. The place of instruction is usually a classroom or a lecture hall, where students receive information from the teacher. This type of instruction is often replicated in textbooks and software programs.

Informal learning, on the other hand, represents a far less structured means of acquiring information.

It can happen anytime, anywhere. This type of learning can take place on a bus, in a restaurant or even at a karaoke joint, and there’s no book or strict set of rules that needs to be adhered to. Informal learning can be very spontaneous, which is why it’s also sometimes referred to as incidental learning.

When someone is learning a new language for the first time, there’s often a heavy emphasis placed on becoming familiar with the grammatical system of the language and memorizing gallons of vocabulary.

To do that, learners are encouraged to “study hard” by completing all the relevant exercises in textbooks, and in the case of Japanese, practicing kanji by writing it down multiple times in notebooks, on random bits of paper or on pretty much any surface pen works on—just don’t do it on the newspaper at the café.

This more traditional method of study isn’t bad at all, but it definitely isn’t the only thing that helps improve your overall language proficiency. In fact, the only real thing you need to learn a language, whether it’s formally or informally, is comprehensible input.

Comprehensible input (CI) is a linguistic term that means “messages we can understand.” It first came from linguist Stephen Krashen’s Input Hypothesis, where it was suggested that comprehensible input is the single most important thing in improving language skills—and that, as a matter of fact, it’s the only thing that improves language skills. This was put forward in 1977 and still makes a whole lot of sense in 2017.

If a Japanese language learner tried reading a short story full of difficult kanji they didn’t recognize, the contents of that story wouldn’t be very meaningful and they wouldn’t serve to improve any Japanese skills. But if there were a vocabulary list that came with that story, transforming the story into comprehensible input, the story would suddenly come to life. In other words, the learner could understand the message and improve their language ability with exposure to that story.

So, How Do J-pop Songs Help You Learn Japanese?

J-pop songs have all the qualities of ideal comprehensible input. You’ve got a relatively simple song that’s repetitive, catchy and easy to memorize. The messages of the songs don’t get too complicated, and you can decipher the messages because these songs all have lyrics and English translations of said lyrics readily available.

The fun factor also makes J-pop songs that much more approachable for learners. While language learning is a process that takes time and effort, having silly, bubbly and at times dramatic music can make everything a lot more fun.

Listening to Japanese pop music is an enjoyable, recreational activity. It’s easy to forget that, when you’re crying along to “粉雪 (Konayuki)” by レミオロメン (Remioromen) or belting out “Best Friend” by キロロ (Kiroro), you’re in fact practicing your speaking and pronunciation skills.

What’s more, karaoke places are well known for having on-screen lyrics that participants can use as a reference if they don’t know the words to a song. This doubles as a study feature because you’ll quite often see unfamiliar kanji with the hiragana attached on top (also referred to as furigana). Plus, most J-pop songs have been transformed into karaoke videos on YouTube or elsewhere so you can learn to sing along or host your own at-home karaoke party.

Listening to J-pop is especially great for Japanese language learners because of the way it uses slang, metaphors, uncommon grammar points you may or may not have learned in class, casual language use and much more. Those are great things to learn, and you usually won’t find them in a textbook!

5 Jazzy Japanese Lessons You Can Learn with J-pop Songs

Want even more awesome J-Pop content? You can listen to authentic Japanese music and many other videos of native Japanese speakers.

Each video comes with additional learning features, from interactive subtitles and transcripts, to adaptive quizzes and multimedia flashcards.

Try it out with a free trial!

J-pop songs often use metaphors to describe feelings and situations. They love to get colorful, and at times a little ridiculous.

In the KinKi Kids song “僕の背中には羽がある” (ぼくのせなかにははねがある), there’s one poetic line that goes:

The English translation of this is literally, “the sea stops talking,” but in the context of the song it comes across more like “the sea’s waves are silenced.”

When you’re writing a creative assignment for class or scribbling Japanese thoughts in your diary, this might be a good sentence to weave in. You can switch it up with different words too, like wind, birds, crickets and so on.

Every time you encounter a new J-pop song, linger on the more poetic lines like this one. Really think about them and what they’re conveying within the context of the song.

Early on in “悲しみよこんにちは” (かなしみよこんにちは), the track from the opening credits of Rumiko Takahashi’s Maison Ikkoku, we have this line:

きらきら (to shine/sparkle) is just one of many onomatopoeic expressions in Japanese.

Onomatopoeia (擬音語 – ぎおんご) refers to words that sound like the noises or actions that they’re trying to describe. For example, in English we have hiss, meow and woof. Japanese onomatopoeia are different because they usually have a disyllabic word that’s repeated. Other examples of onomatopoeia in Japanese include: もりもり (big and strong), くたくた (dead tired) and ふわふわ (fluffy).

Using onomatopoeic expressions in your writing and speech can make your Japanese sound a lot more natural. Next time you want to say something is shining/sparkling brightly, you can say:

Listen for these in your favorite J-pop songs!

When learning any language, one of the best ways to remember something is to do it again and again.

This applies to reading and writing, but especially listening.

Listening to songs in particular is a great way to hear repeated sentences and phrases. Take a look at this line from Hana Hana’s “さよなら大好きな人” (さよなら だいすきな ひと):

Listen to this song and try to follow along with its lyrics. This line is repeated throughout the song, so by the end, you’ll definitely be singing along with it.

When you’re out at karaoke singing something you don’t know that well, chances are pretty great that you’re reading the lyrics. Heck, even for popular English songs that you know well, you’d probably read the lyrics to make sure you don’t goof anything up or miss a beat.

Usually there’s enough time to read the lyrics as you go, and furigana always comes to the rescue so there’s no kanji you can’t recognize. Every song is presented just like this line from SMAP’s “世界に一つだけの花” (せかいにひとつだけのはな) below: 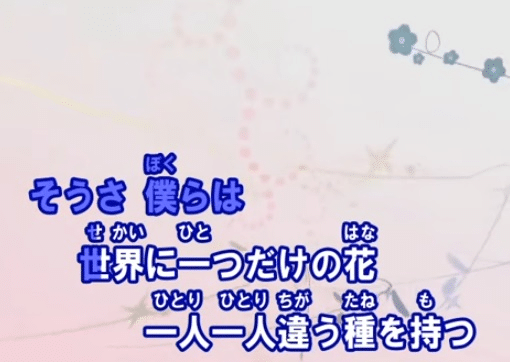 The great thing about this learning arrangement is the setting: the karaoke place. Because you’re participating in a fun, recreational activity with friends, it probably won’t occur to you that it’s reading practice in disguise. But it is.

Even if you’re following along with the lyrics on a computer screen at home, I guarantee you’ll be feeling more relaxed than staring down the barrel of a formal homework assignment.

The more you practice Japanese in this chill way, the more you’ll learn to enjoy studying the language—it’s a feeling that will transfer over into even more formal methods of study and practice. Overall, J-pop will teach you that Japanese is fun and approachable.

Singing J-pop aloud doesn’t just help you memorize lyrics, it helps your speech become more fluid. You’ll get a step closer to fluency with every song you master.

Not only does this sing-along time act as a good reinforcement to any speaking practice done in class, but it also means your mouth is practicing the necessary movements to make those words.

大人の僕も傷ついて眠れない夜はあるけど (おとなのぼくもきずついてねむれないよるはあるけど)
There are sleepless nights where I’m hurt, even as an adult

You need to be able to sing this line pretty fast to make it stick to the rhythm of the song. But the more you practice it, the easier it becomes to say the words and the quicker you’ll be able to withdraw them from your linguistic repertoire.

So, next time you have an oral exam coming up or you’re having conversation practice with native Japanese speakers, why don’t you try your MC skills beforehand?

Being exposed to these kinds of linguistic structures is important for learning a language thoroughly.

It’s often a good idea to stray from the books from time to time, seeking out as many different forms of Japanese you can, and J-pop is one of the richest goldmines for this.

So, whenever you’re out with your friends at karaoke, just remember—you might be having fun, but you’re also honing your Japanese skills.