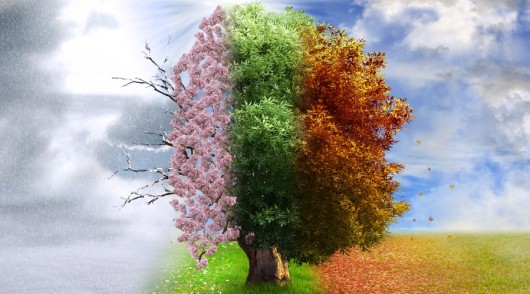 A few years ago when I was learning Japanese at an intermediate level I visited Japan and happened to pop by a convenience store.

I bought some fried chicken, known as 唐揚げ (からあげ), and took it to the cashier and she asked me a question which, despite being very simple, confused me.

“Do you want me to warm up the karaage?” – 唐揚げを温めますか？(からあげをあたためますか？)

Logically the whole sentence made sense, and I knew the adjective “warm,” 温かい (あたたかい), but I had never come across the verb “to warm,” 温める (あたためる) in this way.

Later I talked with a Japanese friend about it and realized that I was entering an area of Japanese that was quite complicated.

There are a number of verbs that indicate change, which for some reason I never encountered in class. My teachers had only ever covered a grammatical construct consisting of an adjective plus narimasu to show that something becomes colder, hotter, faster, etc.

For example, when I wanted to say something “became hot,” I’d use: 熱くなりました (あつくなりました).

When I entered advanced classes I became intrigued by the fact that classes never covered verbs that indicate change, and my fellow students were unaware of them as well—even though they are quite important to know. After all, change is good!

Why These Verbs Are Skipped in Japanese Class

My best answer to why these verbs were not taught is that it requires the student to take something quite easy to learn, such as it’s cold, it’s slow, etc., and study two different verb forms that are pretty hard to get your head around.

In terms of kanji they are easy to recognize, but become confusing in verb form. For example:

Logically it’s simple to read the above kanji and to understand it’s about speed. However, if I tell you that 早まる can only apply to things and 早める to people, then you will start to see the problem.

If a sentence includes these verbs, you have to think about what or who it’s referring to. If you are in an exam, or even just plain tired, you are bound to make mistakes.

It seems that in order to avoid possible confusion, teachers stay away from these kinds of verbs, or perhaps it’s difficult for beginners while considered easy for advanced level students.

Unfortunately, if a student doesn’t learn the proper way to use both the -まる and -める forms, then they’ll have an incomplete understanding of both their meaning and usage.

Why You Should Know These Japanese Verbs

As my encounter in the shop demonstrates, this is basic vocabulary for Japanese people. If you think about your own native language, it’s perfectly natural on a daily basis to say things like: “The weather is getting hot outside,” or “That car is getting really fast,” and more.

It is really hard to be able to describe something changing in another language, and for this reason it’s important to study verbs of change properly.

This verb is slightly different, as it ends in -げる/-がる, but it’s important to understand these and the similar looking 広まる (ひろまる), 広める (ひろめる) that are introduced in the next point.

This version means something got physically wider or bigger.

Example:
At first, the protest was limited to Tokyo, but in the weeks that followed they spread across the country.

In contrast, 広まる/広める has a slightly different meaning.

In this version something expands or spreads in an intangible way.

You can see in the below sentence a 広まる example, which as we learned before only applies to things. It’s easy to think that because the sentence is about an actor, it should be 広める, but the subject is actually the actor’s reputation.

Example:
After appearing in a drama the reputation as an actor spread.

This verb can be deceptive, as it’s formed from one of the first kanji that any Japanese learner will study. We can all quickly assume that it’s related to height, but not in the same way. In the example below, for instance, it can be used in a set phrase for expectations to get higher.

Example:
I have high expectations for Shinzo Abe’s policies.

This verb is one that we all think in terms of holes in the ground, but it also refers to deepening something in other ways.

Example:
After I properly read the book my understanding of physics got deeper.

This verb is very similar in meaning to the English verb “quiet down.”

Example:
Although the typhoon has reached Japan, it seems that tomorrow the winds will quiet down.

It’s easy to remember this verb if you keep your hand in mind; use it with anything that you can put in your hand and curl up.

Example:
In the instant that the husband got angry he scrunched up the paper.

The below example is somewhat tricky, despite being so simple. The literal translation of the Japanese sentence doesn’t mention a subject, so you might think that the jelly is in the fridge, which would lead you to the verb 固まる.

However, for Japanese people, the subject is hidden. They would interpret the sentence to mean someone put jelly in a fridge, which will therefore cause it to get cold and become hard.

Have a headache yet?

Example:
The jelly will get cold and will get hard.

Most of us drink coffee or tea every day, so this may be an essential verb for you!

Example:
The coffee is too strong, so put some milk in to dilute it.

This verb is quite straight forward in that you just need to remember the adjective form and its meaning—something is weak.

Example:
As the disease progressed their body got weaker.

It’s relatively easy to understand what’s happening when you see this verb. But it’s important to remember the rule that -まる can only apply to things and -める to people, so in the below sentence the subject is criticism – 批判 (ひはん).

Example:
When I heard the politician talk on TV, my criticisms of their policies got stronger.

This refers to time getting faster or something becoming earlier.

Example:
The sunset will get earlier.

This version of get fast refers to speed.

Example:
The plane entered the runway and then its speed increased just before taking off.

Even Japanese people will get this verb mixed up with our final verb on this list. So it’s quite complicated to explain the difference between the two, but at a basic level this verb refers to temperature.

Example:
The house is old, so it takes time to heat up.

At a very basic level this version of warming up refers to things, feelings and liquids.

Example:
Enter the onsen and your body will warm up.

Even if these verbs of change were skipped in your regular classes, that’s all the more reason to learn them now.

Understanding and using these verbs correctly will boost your Japanese level, too.

So remember: Change is good!

Learn Advanced Japanese: 10 Tips to Power Through Plateaus
The Beginner’s Guide to Counting in Japanese Like a Native