Um, uh, like, I guess, I mean—whether we like it or not, these words are a part of our natural speech patterns, and they can be extremely difficult to eradicate.

The Spanish language has a variety of filler words, or muletillas (little crutches).

Read on to learn 13 of the most common Spanish muletillas, plus how and why to employ them in your everyday life.

For non-native Spanish speakers, learning filler words is a useful investment of time for a number of reasons.

First, Spanish speakers use filler words all the time, and knowing them will help you improve your Spanish comprehension skills. Even someone with a good grasp of Spanish vocabulary may have a hard time getting the gist of a casual conversation when every other word is “o sea” or “así que.” These words are not always taught in formal Spanish classes, but they are an important component in everyday conversation.

Second, using filler words makes your spoken Spanish sound more like that of a native speaker. Muletillas are great connecting words—they form the glue that holds together a sentence and makes it sound fluid and natural. These words can help you express subtle shades of meaning or emotion in the way that native speakers do.

Finally, filler words are great for non-native speakers because they allow you to stall for time while you think of how to say something! When I speak Spanish, I despise the intimidating silence that comes when I forget a certain vocabulary word or verb conjugation. Usually, having nothing to say makes me so nervous, it becomes even harder to remember the word I’m looking for! Even worse is relying on English filler words due to nervousness. Inserting “like” and “um” into your spoken Spanish not only makes your Spanish sound disjointed—it also makes it harder for native speakers to understand you.

A highly useful word, pues is the Spanish equivalent to the English filler word “well…” Throw it at the beginning of a sentence to show uncertainty or indecisiveness. You can also use it to stall while you think of the best way to respond to someone (or to recall how to conjugate a tricky verb).

A: ¿Quieres salir esta noche?
(Do you want to go out tonight?)

A ver directly translates as “to see.” As a filler word, use it like the English phrase “let’s see…”

A ver… ¿qué podemos hacer esta noche?
(Let’s see… what can we do tonight?)

You can also use the similar vamos a ver.

Vamos a ver qué hay para hacer esta noche.
(Let’s see what there is to do tonight.)

I find that vamos a ver is also useful to get people’s attention when lots of people are talking over one another, or when it’s difficult for everyone to reach a consensus.

¡Vamos a ver! ¿Os podéis callar ya?
(Alright then! Can everyone be quiet already?)

The filler word of choice for teenagers all over Spain, this versatile phrase is similar to the English “like.” Spanish adolescents use it all the time in any part of a sentence. Specifically, you can use it before describing the manner in which you were doing something.

Estábamos allí en plan descansando cuando llegó Miguel.
(We were there, like, relaxing, when Miguel arrived.)

No te enfades, lo hice en plan broma.
(Don’t get angry, I meant it like, as a joke.)

Using digo can allow you to sound natural and fluent even when you’ve made a mistake in your speaking. This word, which comes from the verb decir (to say/tell) and directly translates to “I say,” is used to correct yourself after you’ve misspoke.

Me dijo que la fiesta empieza a las nueve—digo, a las diez.
(She told me the party starts at nine—I mean, at ten.)

Use o sea to clarify, explain or nuance something you’ve just said. It’s similar to the English phrases “I mean…” or “in other words…” Another similar Spanish phrase is es decir.

¿Vas a salir otra vez con él? O sea, ¿lo pasasteis bien?
(You’re going to go out with him again? I mean, you had a good time?)

Entonces is a great connecting or transition word, used like the English “so” or “therefore.” It’s certainly a formal word appropriate for written Spanish, but in spoken Spanish it also serves as a handy filler word to throw at the beginning of a sentence.

Grammatically, the phrase así que serves a similar function as entonces: It’s a transition word that means “so” or “therefore.” But like entonces, you can also use it as a filler word, particularly at the beginning of a sentence.

¿Así que al final fuiste al restaurante?
(So you ended up going to the restaurant?)

Bueno, which actually translates to “good,” has a number of different meanings as a filler word.

You can use it like pues, at the beginning of the sentence when you’re trying to think of how to respond.

Bueno… lo tengo que pensar un poco más.
(Well… I have to think about it a little more.)

You can use it to express agreement, or when someone proposes an idea that sounds good to you.

Bueno… sí, eso me parece una muy buena idea.
(Well… yeah, that seems like a really good idea to me.)

A loud or drawn-out bueno can express exasperation, annoyance or disbelief. For extra emphasis, add the word pero beforehand.

Es que is a great filler word to use when you need to explain yourself or rationalize a decision. I’ve found it’s especially useful when you need to politely decline, deny or disagree with somebody.

Teacher: ¿No has terminado la tarea?
(You haven’t finished the homework?)

B: Es que no me gustan las películas de terror.
(It’s just that I don’t really like horror movies.)

I heard this one all the time when I lived in Argentina. Use it exactly as you would use “uh” or “um” in English. For full effect, draw the two syllables out as long as you can: esssssssteeeeeee……

Este is highly useful in the rioplatense Spanish of Buenos Aires. Your mileage may vary if you try to use it anywhere else.

Sabes literally translates to “you know,” and you can use it exactly as you use the colloquial English expression “You know?”

You can also use ¿Sabes qué? (You know what?) as an introduction to a sentence.

¿Sabes qué voy a hacer? Voy a dejar mi trabajo y mudarme a Hawái.
(You know what I’m going to do? I’m going to quit my job and move to Hawaii.)

Eso has many meanings in Spanish; primarily, it means “that,” as in, eso es muy bueno (That is very good). But on its own, you can use eso as a lead-in to a summary or conclusion of a conversation. It’s a good way to reiterate something that you’ve already said but want to repeat or emphasize.

En fin is a great way to wrap up a conversation. Use it to fill that awkward silence when the conversation has come to its natural conclusion you don’t really have anything else to say.

Use it by itself to end a conversation. Or use it like eso as a lead-in to a summary or final thought on the conversation.

En fin…lo pasamos muy bien hoy, gracias por todo.
(All in all… we had a great time today, thanks for everything.)

How to Learn Spanish Filler Words

Of course, listening to Spanish speakers having conversations is the best way to pick up on filler words. If you are lucky enough to be learning Spanish by immersion, this should not be hard—simply go talk to people!

If you don’t have anyone to talk to, you can start by listening to filler words in the context of authentic, natural Spanish on a language learning program such as FluentU. It has a library of native Spanish content like movie clips, vlogs and interviews to help you get started, plus tools to keep track of any study your new filler words. 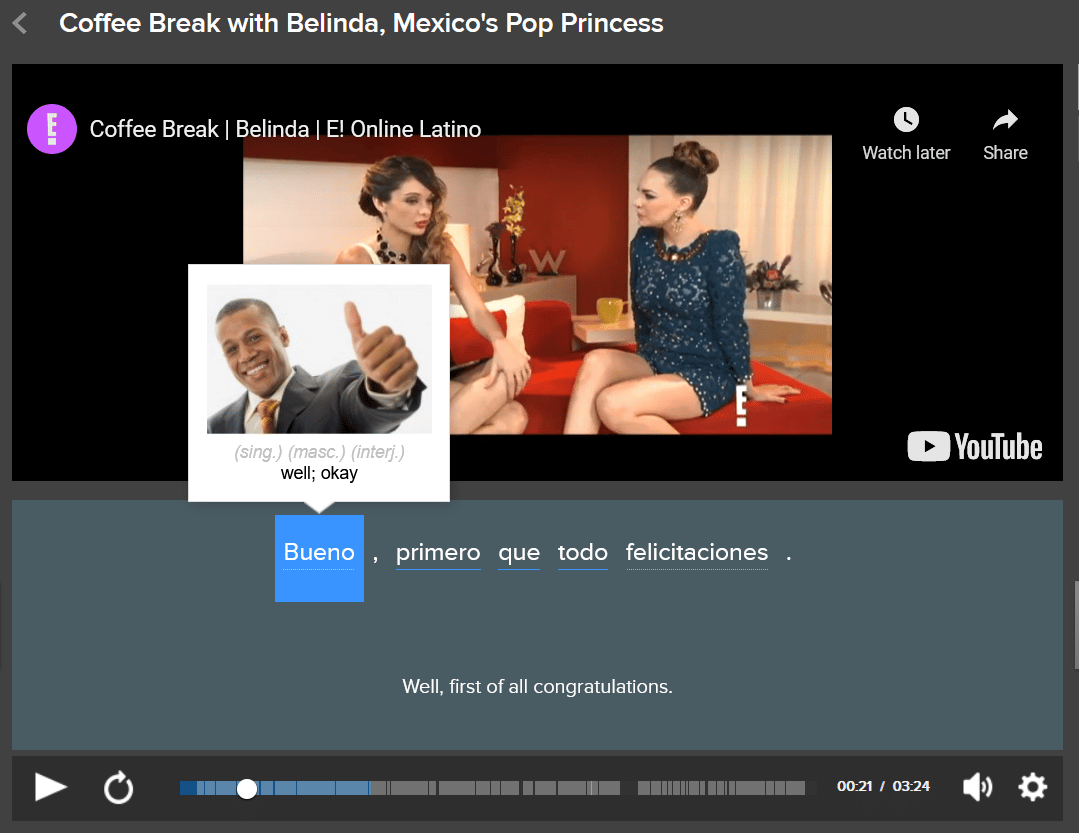 Take note of the words you hear frequently, at the beginning of sentences or when they are at a loss for what to say. On FluentU, you can click on any word in the subtitles and save it as a flashcard. So whenever you encounter a filler word, click and save for later review.

You can even make a custom flashcard deck specifically for filler words on FluentU. Then, you can review them with personalized quizzes and even see other videos where the word is used with the same meaning for additional context.

It never hurts to directly ask what the meaning of a word is, but if you don’t want to interrupt the conversation, you can also jot the word or phrase down and look it up later on WordReference.com. Word Reference’s forums are a great place to get native speakers’ input on the meanings of colloquial expressions.

Most news, books and scripted TV shows—resources which are great for learning other aspects of Spanish—will be more or less useless for picking up on filler words. Instead, look for unscripted television, such as reality TV or talk shows.

Currently, “Gran hermano” (Big Brother) is king in Spain. Luckily, you can stream “Gran hermano” online through this website. Because the characters’ conversations are unscripted, they frequently use filler words and colloquial expressions. Some other unscripted shows to check out are “Cámbiame” and “Mujeres y hombres y viceversa.”

Video bloggers, who tend to speak casually and informally, are also a good resource for learning filler words. Check out HolaSoyGerman of Chile, AuronPlay of Spain or Mariana Bonilla of Mexico.

En fin… This article is an introduction to filler words, which can help bring your Spanish comprehension and conversation to the next level.

These muletillas will help you sound more like a native speaker in no time—it just takes a little practice, ¿sabes? Pues, eso… study your Spanish muletillas and you’ll thank yourself in the future!