How to Start Reading Spanish as Easy as ABC

Reading Spanish can be daunting.

You have strange new words, accents and symbols that you’ve never seen in English.

It can look like a monster growling at you.

Well no fear, I am here to help you and encourage you as you start improving your Spanish reading skills.

How to Read Spanish Letters

We’re going to start with the basics, the ABCs. How did you learn the ABCs in English? With a song.

That’s exactly what we’re going to do in Spanish. Go ahead and watch this YouTube clip of the Spanish ABCs. Spanish is a phonetic language, unlike English. What that means is that every letter makes the same sound in the alphabet as it does in a word.

I promise it isn’t. Let’s take the Spanish letter a for example. A will always make the “ah” sound, as in “father.” This is different from English where “k” can either have a hard sound like in “kitty” or no sound like in “knowledge.”

What does this mean? It means that once you’ve mastered the sound for each Spanish letter, you’ll be able to sound out words very easily in Spanish.

Let’s start with the vowels.

You’ll be hard pressed to correctly spell any words or read any words well if you don’t know the basic vowel sounds. The great thing about Spanish is that the vowels, in my opinion, are easier to understand than in English. You don’t have the rules like “when two vowels go a walking” or “i before e except after c…” What you see is what you get. Vowels in Spanish always make the same sound.

The u is the only vowel that’s a little tricky. In some words it doesn’t make a sound, but more on that later).

Now that we have the vowel sounds we need to move on to the consonants. There are a few consonants in Spanish that never make a sound. Why they are in the alphabet at all is a mystery to me. But they are there and we need to learn them.

U — When coupled with q and g the letter u is silent. Guitarra is pronounced “gee-tar-ah.”

Ps — If you see these two letters together, the p is silent. Psicología is pronounced “see-koh-loh-hee-ah.”

The Rest of the Letters

Let’s move on to the other letters. Most of these are pretty self-explanatory if you listen to the ABC song. For example, B is pronounced the same as in the song “beh.“ Here’s a great YouTube link that goes over all of the sounds that Spanish letters make. She even has it written on a whiteboard so you can copy it down, take it around with you and study it.

There are a few letters that are harder to read because they either sound like other letters or they make multiple sounds. Take a look at the rest of the Spanish letters we haven’t discussed yet:

This can either be pronounced like the letter s (serpiente), as in the word acelga, or with a hard sound as seen in casa. How can you know which way to read it?

The Letters B and V

In Spanish these two letters sound very similar. So similar that they are referred to as beh larga (Long B) and beh corta (Short B- this is V). When reading these two letters, they make the same sound- beh.

Here’s an article that goes more into the depth of the b vs. v issue. Read it to help further your understanding.

Looking at that you may be thinking, “that’s two letter L’s.” Nope. It’s one letter called the doble ele. When two Ls are put next to each other in Spanish, they make a different noise than just one L. When you see them together as LL, they make a sound like the English letter Y.

If you want to study the LL more in depth, here’s a link to a lesson completely devoted to this letter.

This may be the most intimidating letter in Spanish because it doesn’t exist in English. It’s used very often and has a unique sound. This letter is called the enyay. It’s pronounced like the “ni” seen in onion. You probably recognize and already know how to say piñata (peen-ya-ta).

The best way to become familiar with this letter is to hear a native say it. That way you’ll be able to really hear how the letter sounds. Here’s a YouTube link that can help you with that.

How to Read Spanish Accents (Tilde)

When I started learning Spanish, the accents were what confused me most. However, they’re incredibly important when writing and reading Spanish. Accents give words clarity. How so?

Well, perhaps you’ve noticed that there are some words in Spanish that are exactly the same—except that one has an accent.

There are several other words like this. As you’re reading, the best tool you have in your belt is context clues. If you’re unsure, read the sentence with both options.

How to Read Stress in Spanish Words

Let’s put it all together and figure out exactly how to pronounce the words. Where do we put the stress?

There are 4 rules we are going to go over about stress.

1. Words ending in N, S or a vowel without written accent

If a word ends in a vowel, the stress goes on the second to last syllable.

2. Words ending in a consonant (except N and S) with no written accent

If a word ends in a consonant, the stress is on the last syllable of the word.

If a word has a tilde (written accent), the stress goes on that syllable.

4. Words that end with mente

If a word ends with –mente then you’re going to have two stresses. In this case one stress in on the strong syllable of the adjective (tris-te, rá-pi-da, etc.) and on men of –mente.

How to Improve Your Spanish Reading Skills

Now that you’re an expert with the rules, test your skills. This first video is set up like a textbook. There are simple pictures and sentences. The narrator will read the sentence normally, then break it up. There are subtitles below so that you can read along with him.

Here’s a link to a man reading a short story in Spanish. The best thing you can do is pause the video before he starts reading. Read the passage aloud to yourself and record your voice reading it. Then listen to how he reads it and compare it to your own recording.

It may seem like a tedious task, but if you do that then you’ll hear the difference in your reading and his reading.

You can do this activity with pretty much any subtitled Spanish videos, ideally with ones that feature authentic dialogue, like the short video clips on FluentU. These include movie clips, news segments, inspirational talks and even animated short stories. The videos on FluentU can be paused by hovering your cursor over the interactive subtitles. 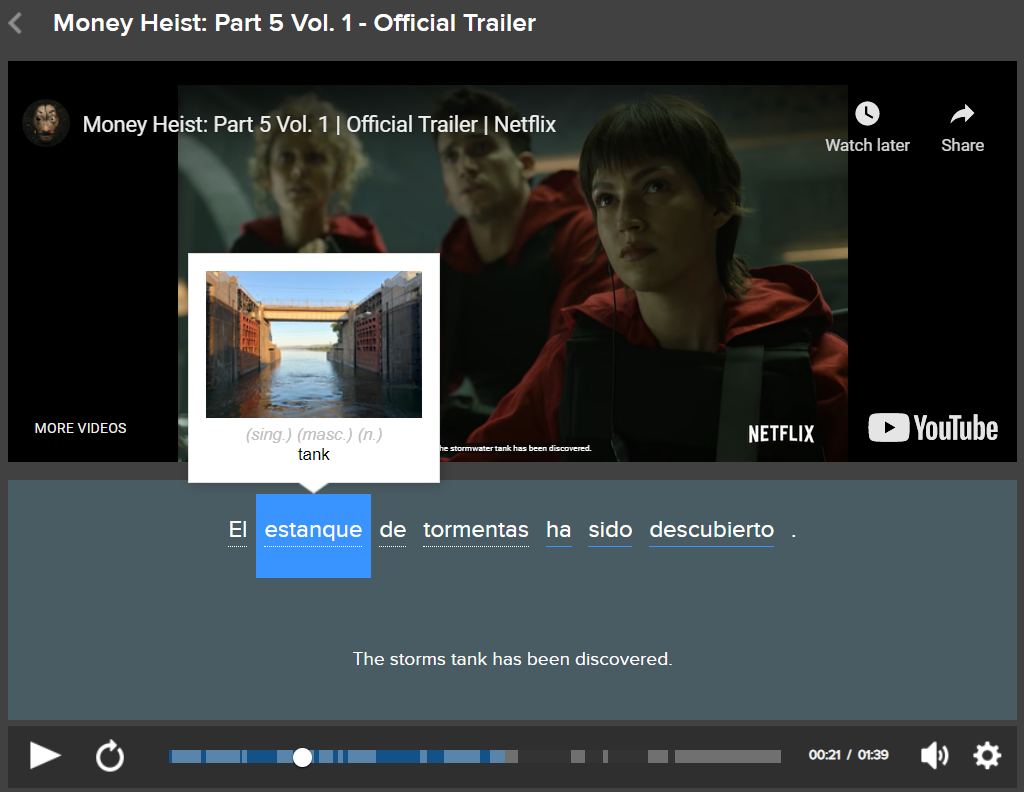 Click on any word to see its meaning and pronunciation, as well as clips from other videos where the word is used for more context and accents. Read the word out loud and try to match your pronunciation to that of the video. You can save words as flashcards to practice them some more.

And on the iOS and Android app versions of FluentU, you’ll get a chance to speak the words out loud.

Pick up on those differences and start working to correct them daily.

In no time, you’ll be able to read anything in Spanish.

I am from the small town of Idaho Falls, Idaho. I never thought I'd leave my little city until my dad was asked to move for work. At the age of nine I moved to Barcelona, Spain where I lived for three years. Several years later, I moved with my parents to Buenos Aires, Argentina. I currently am back in Idaho and am married to my amazing husband, who learned Spanish in Guatemala, and raising my two little girls.