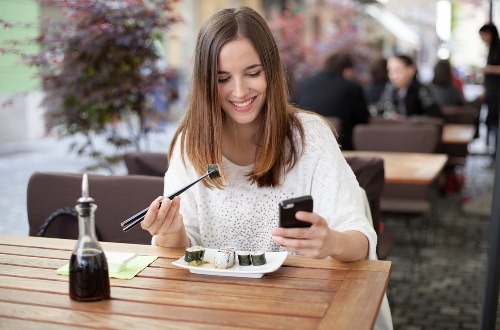 Welcome to the Japanese Tweet-o-sphere: 4 Tips That Make Twitter the Easiest Way to Learn Japanese

Learning Japanese can be an uphill battle.

You’d like to creep closer to fluency every day.

And, perhaps most important, you’d like to make sure you’re having fun while you’re learning so you don’t lose motivation and give up.

Doesn’t putting Japanese knowledge in action on a social media website sound appealing? It will help you achieve the above goals and so much more.

Getting involved online is an absolute must for any learner who is dying to interact with native speakers in an immersive environment.

Lucky for you, if you’ve got a Twitter account, you don’t have to do much stretching past your comfort zone to achieve all 3 of these things and even a little more.

Here are a few ways you can include Twitter in your daily Japanese regimen.

The great thing about Twitter is that it’s extremely popular in Japan. Celebrities use it, everyday people use it, anime characters use it! The user base is so varied, you’re bound to find the right accounts for you.

Want to know the latest news? There’s a Twitter account for that: @NHK_news. Curious what your favorite author or manga artist is up to? They’re probably on Twitter posting a picture of their lunch. Do you have a specific hobby or interest? Twitter is here to bring you closer to people who share in the enthusiasm.

Not only that, but there are great educational accounts like 楽しい会話 (たのしいかいわ/@funfunconv) that are meant for teaching Japanese people English, but can work in reverse, too! In one tweet, an English sentence and its Japanese equivalent are paired together. This can give you a pretty good idea of how to use some casual phrases and words in the right context, show you sentences you may never learn in a classroom setting and teach you some useful, formal Japanese.

If you like following the latest on current or popular anime and manga, there’s a wealth of Twitter accounts for that exact purpose. If you’d like to follow your favorite Japanese music performers or actors more closely, there are official accounts you can follow that are either run by management or the performers themselves! Just searching 公式アカウント (こうしきあかうんと) will get you started with lots of results.

Have you ever had a run-in with a Twitter bot? In Japan, Twitter bots are very common as well. A good number manifest in the form of quotation or news feeds. Some just post pictures or impart some other kind of information. How about a couple examples? There’s an account that posts Studio Ghibli movie quotations, and a rather curious account that posts which flowers correspond with different birthdays and some accompanying words.

Alright, alright, so there are all these people on Twitter, great, but what are the long term benefits of following them?

Even if they aren’t all as educationally straightforward as @funfunconv, following Twitter accounts will give you daily reading comprehension practice in bite-sized portions, exposure to native slang and the ability to choose what kind of topics you’d most like to learn to read about at any given time.

Say you’d like to boost your understanding of the Japanese used in news broadcasts. Following a major news broadcast’s feed such as the above linked NHK could get you more familiar with the politeness level and words used, with the added bonus of helping you find out what’s going on in different parts of Japan.

Or, you could make it a little more fun for yourself by following a news feed for, say, the music business. The politeness level may differ, but you’ll get to find out what your favorite artists are up to, learn how to read names in Japanese, still get some news reading practice in and maybe even discover some new music! Not only that, but it could give you some future points of conversation with other people on Twitter! (We’ll talk more about that in a minute, actually.)

Again, it’s a very wide Twitter jungle out there, so pack a bag and get exploring! And a quick word of caution: Just like anywhere else, there are spammers, scammers and posters of NSFW content in the community too, so stay safe!

Once you’ve familiarized yourself with the user base, why not go an inch further and…

You want to know something awesome? You can say way more in Japanese on Twitter in a single tweet than you can in English. If that doesn’t make you excited to start tweeting right away, I don’t know what will.

Let’s say you’ve discovered the best movie you’ve ever seen, and you want to tell everyone about it. You begin a tweet:

“Big Hero 6” is the best movie ever, guys. It’s got robots, superheroes, a cool city, a mysterious villain, cute characters, a great story,

You’re out of characters. Oops.

Let’s try that again, in Japanese this time:

Guys, “Baymax”* is the best movie. It’s got robots, superheroes, a cool city, a mysterious bad guy, cute characters, a wonderful story and amazing animation. Definitely definitely check it out! Well, that’s it. See you.

So, in that tweet, not only were you able to give a summary of things you liked about the movie, its title, your opinion and a sign-off, you also still have characters left to spare! 33 to be exact!

How is this possible? Put simply, Japanese can be far more descriptive per character than English can. For example, a single kanji character can represent “tree” or “dog,” whereas in English it takes 3 or more times the number of characters to describe the same thing.

So if you ever see a long tweet in Japanese, you know you’re probably in for an adventure.

Hold on, though, that’s not all you need to know. Hashtags can be a pretty big part of tweeting and Twitter culture in general. Are hashtags used in Japan too? They sure are.

Although I don’t really keep up with them myself, it’s hard to ignore the fact that hashtags and trending topics are rather common fare for Twitter users, regardless of where they’re from or what language they speak.

If you’re going for the true immersive experience, why not check out some more commonly used hashtags among Japanese users to spice up your tweets? Here are some to get you started:

According to the official Twitter account, NAVERまとめ is a “curation platform service.” Users of the platform curate various elements such as images, links and quotations to report on interesting content.

Under the hashtag, you’ll predominantly find links to curated postings, which could lead to you finding cool new things to check out or learning more about things you were already aware of!

Greatest of all, people outside of Japan aren’t excluded from the fun. The NAVERまとめ Reader App is available for download to your iOS or Android device. And yes, despite the English language descriptions on the download pages, the app will be in Japanese. (Trust me, I checked.)

This one should be relatively straightforward. In a hashtag dedicated to news, what else are you going to find? News, of course! All kinds from various news sources. Music, movies, TV, fashion, current events…basically any topic you’d ever want to hear about will show up in this hashtag feed!

This is a hashtag dedicated to music. Similar to the previous two, this will include news-related tweets, as well as links to specific songs, references to music, links to buy or sample music, music videos, live performances, etc. Even things relevant to musicians, such as instruments and neat audio equipment, may show up!

Finally, here’s a hashtag dedicated to games. What with the recent E3 (Electronic Entertainment Expo) announcements, people will probably be talking about upcoming releases and the trailers for them for a little while.

On a usual day, it’s likely you’ll mostly hear about mobile app games or a console game that’s already been released. Commentary on different games is also likely to pop up.

Under all of these hashtags, politeness levels will vary from tweet to tweet, as will the kind of terminology used (e.g., more complicated terms and more kanji vs. simpler wording and more kana, or anything in-between.)

With more technical content, or content from the perspective of a customer service worker speaking to the public, you’ll see that highly polite language and more technical terms (typically written in kanji) tend to be used, for example.

After following some people for a while and getting used to tweeting in Japanese, you may be feeling like you just need a bigger challenge. More of a push. But what more could you possibly do…?

4. Change Your Default Language to Japanese

If you’re ready to go a little further with your immersion, why not go into your account settings and…change your default language to Japanese?

Just like that you’ll instantly be surrounded by Japanese words any time you check Twitter. Coupled with following native Japanese accounts, what could be a more immersive tool than Twitter?

An interesting part of this is that, if you’re already accustomed to navigating Twitter, you’ll probably know intuitively what different words and sentences are supposed to mean.

If you don’t know or aren’t entirely sure what some words or phrases mean, you can always use your favorite dictionary to look up words you’re unfamiliar with. (One of mine is definitely Tangorin.)

Or, you could simply consult your new Twitter friends and subsequently stir up a language exchange! There definitely will be times when more casual terms won’t come up in dictionary results, so asking someone, or looking it up on Google or Twitter itself, will be necessary for furthering your understanding.

It might go without saying, but changing your default language won’t affect any other aspects of your account except what language your interface displays. If you want to get your “Trends” list to match up with Japan’s, just click “Change” and choose to change your Trends location by typing in “Japan (All cities).” Then you’ll have constant access to the latest Twitter trends in Japan!

The immersion never has to stop.

Lastly, here’s something to make you sound a little more native before you go on your way.

When speaking in Japanese, the typical way to say “to tweet” isn’t actually ツイートする (ついーとする)! Though you can say that if you really want to (@hanakotoba_bot from earlier uses it in their description!).

The word Japanese people tend to use is つぶやく which literally means “to murmur” or “to mutter.” With that in mind, you can pretend everyone’s in little huddles muttering secrets to each other in hushed voices, phones held close to their chests.

So, that’s about it.

I have nothing more to teach you, young Twitter Padawan. The rest is now up to you.

Sign in, change your language settings, do some searches, follow some people and go write some tweets!

Good luck out there in your new virtual playground! And, most importantly, have fun!