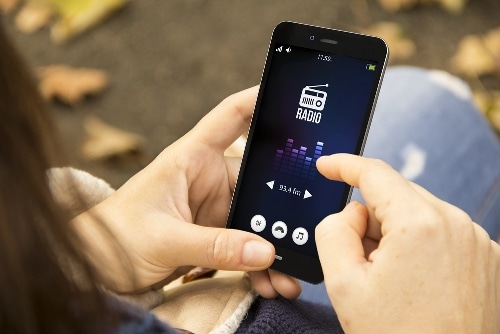 How to Speak French Naturally and Effortlessly with French Radio Online

Not on the same wavelength as native French speakers?

Then it’s time to get tuned into real-world French.

Believe it or not, it’s as simple as listening to some great French radio stations online.

Why You Need to Learn with Authentic French

I took French in college and for one hour a day, four days a week, I’d go to a class and stare at a textbook.

Sometimes we’d read a passage or two together as a class, so my exposure to French would be fifteen American accents from learners—taking me farther and farther away from learning actual French pronunciation and cadence.

Suffice it to say, I ended that semester feeling that my language skill wasn’t improving at all.

As anyone who knows a language can tell you, staring at a language textbook or memorizing the various rules of grammar will only take you so far in learning a complex language like French.

Only when I ditched French class and began learning the language on my own did I begin to not only learn French, but also enjoy it!

And if you enjoy French class and textbooks, online French radio can make a fantastic at-home supplement to your formal learning. For example, you can always tune in and have French radio programs playing in the background while you’re doing your homework to keep yourself “in the zone.”

French radio is an all-around great tool to acclimate yourself to the language while having fun!

Scroll down to learn how radio can be a powerful tool to help you master French.

Why Listen to French Radio?

Think about it. When you first learned a language as a child, was it through books and memorization? Meh, not until elementary school.

Before that you learned by listening and being immersed in your native language. Our ears are the gateways through which language enters our brains—and through radio, you can practice passive listening and actively train your brain to recognize and become comfortable with the French language.

Radio fits into your busy routine

You need to be constantly exposed to a language to learn that language. But how does this work when you’ve got a hectic day full of to-dos?

Unlike a class which you have to attend, you can listen to radio at your leisure. Whether you tune in on your drive to work, while you’re waiting for a meeting or while you’re in the kitchen doing the dishes, radio can go with you anywhere.

You choose what you listen to

If you get a French learning textbook, or pre-prepared audio lessons, the content is often, well, to put it mildly, boring.

You usually end up listening to mundane, cookie-cutter conversations about ordering bread at a boulangerie or asking for directions from strangers who, let me tell you, will sound nothing like the strangers you’d meet on the street in France. No wonder we forget almost all of it the minute we close the book.

This isn’t the case with radio. You prefer comedy? Find a comedy show! Prefer news? Le journal of your choice! Because you can choose what you listen to, you can focus on interesting content that’ll keep you engaged. And being engaged is how we learn languages!

With radio you can double your learning!

In French class, we’d read tons of stiff passages—obtuse stories of people recollecting their pasts in ways that would force you to use all three past tenses. Sure, my knowledge of the passe compose improved, but that was it.

When you listen to radio, you won’t be stuck reading meaningless passages that try to demonstrate all your newly-learned French concept. Instead, you’ll get a chance to learn something new.

As I’ll show you, the diversity of French radio means that you can find the perfect show or broadcast to fit your personal interests.

You can improve your French and learn something at the same time—now that’s a win-win!

How to Get Started Listening to Online French Radio

First, the bad news—outside of rural Louisiana and areas in the northern United States near the border with Quebec, you won’t find any French radio on your AM or FM dials.

Now, the good news—French is one of the world’s major languages, spoken on every continent, and there’s a plethora of diverse radio shows available online, for free. And they cover all different topics in order to fulfill a diverse range of needs and desires.

The most convenient way to get French

radio is through a podcast. On your PC or Mac, any major audio program (such as Itunes or Winamp) will be able to download and play podcasts. Try their built-in search functions to find what shows you already have access to!

On your phone, you’ll probably need to get an app. I personally use Podkicker, a free app, on my Android smartphone. It has in its searchable database hundreds of French language radio shows, which I download and listen to at my leisure.

Begin in a quiet place

When I first began listening to French radio, I found a little-used computer lab at my university—in the basement with large, comfortable, noise-canceling headphones. I made it a routine to come here once a day for 15-20 minutes, just enough time to listen to a single show and write down any words that I didn’t know.

Eventually, as my ear improved, I began to listen to French in other settings such as car traffic, the subway or during long train or bus rides. None of that would’ve been possible had I not started in that quiet computer lab! For more tips, see this post on creating your own French oasis at home.


Let me tell you, you’ll struggle at first.

Learning through listening is different from the structured language learning classrooms give us.

In my college classroom, each unit focused on something specific. Perhaps it was gender, then the past tenses, then prepositions—all presented one at a time, with the idea being that you needed to steadily add building blocks.

As you listen to French radio, you won’t get this cherry-picking, piece-by-piece language instruction.

You’ll get gender, verb tenses and prepositions along with dozens of things you don’t understand all at once. Don’t let that scare you.

Relisten to shows and try to catch just enough to get the meaning. That’s what’s important now, the rest will come with time. Focus on what you do understand and try to improve piece-by-piece.

If a show is too complicated, or the accent too tough to decipher, don’t despair. Try another one!


Don’t understand a word? Then write it down—as best you can—look it up in a dictionary and then relisten to the show and try to hear all the words you couldn’t understand the first time around. You’ll be amazed how fast you begin to pick up new French vocabulary with this method.

And that leads to the most important point. To learn a language, we need to be exposed to it everyday. As I mentioned, because radio podcasts are convenient, they can go with you anywhere. Radio can be a great way to finally make learning French a part of your daily life. Make a plan and stick to it so that you can get the most out of your French language listening.

The announcers speak slowly, clearly and use simple words to explain that day’s breaking news. The best part? They also provide a transcript. I recommend listening to this every day, writing down the words you don’t know and then comparing this to the transcript after. When you get to around 90% comprehension, then you can move on to other radio shows.

RFI also has a host of other shows, all free, on subjects as diverse as technology, travel, current events, music and more. I particularly love the show Grand Reportage, which takes you on a 20 minute long journey to a different part of the world every week. Learn about the horrific conditions in Syrian refugee camps, about the revival of French in the bayous of Louisiana or how Rwanda has recovered from the 1994 Genocide.

For those looking for something a bit more complicated.

A quick FluentU guide for those of you in need of inspiration.

Remember, French is more than France. It’s also one of the most widely-spoken languages in Africa. Learn to differentiate between different accents by also listening to Fracophone radio. For me, French African accents, with their slower, melodic tones, can often be easier to understand than rapid-fire Parisians.

Another good one for beginners, this bilingual show broadcasts every Monday from 6 – 8 am EST: music, interviews and more information about French culture. Past episodes are available through the provided link.

More into Quebec than France? Then listen to news in French from this Montreal radio station. Click “baladodiffusion“ at the bottom of the page to access a variety of downloadable podcasts and work on your comprehension of Québécois French.

Nithin Coca is a freelance writer and media activist, who uses his French often while traveling around the world. Follow him on Twitter here.