The Spanish Subject Pronouns Explained: What They Are and How to Use Them

Yo, tú, él, ella… These Spanish subject pronouns are bound to look familiar to anyone who has cracked open a beginner’s Spanish book.

But after reading this post, you will know to use personal pronouns in Spanish like a true native speaker (no matter where you travel).

Let me guide you through each one of these handy pronouns with simple explanations and tons of real-world usage examples.

The first person pronoun is yo (I) and always refers to the person who is speaking:

Yo estoy escuchando música.
(I am listening to music.)

This is the Spanish “you,” or the informal second person singular. We use it only in casual situations, typically where we know the other person well.

You probably won’t use tú when talking to an older person, boss or an unknown person on the street (unless they were a little child).

You would use tú when talking to friends, families, coworkers of similar standing, etc.

¿Quieres tú un café?
(Do you want a coffee?)

Tú no puedes venir porque tú no has hecho los deberes.
(You can’t come because you haven’t done your homework.)

Él and ella are the Spanish third-person singular personal pronouns, and they are translated as “he” and “she,” respectively.

In Spanish, every noun is either feminine or masculine, so it doesn’t matter if our third person is a person, an animal, a thing or a thought. They will just be either “he” or “she” in Spanish, whereas they could translate as “it” in English.

Let’s have a look at some examples:

Mi gata está en la cocina. Ella tiene hambre.
(My [female] cat is in the kitchen. She is hungry.)

(Yo) Me he encontrado un libro. Él es muy antiguo.
(I have found a book. It is very old.)

Usted is the pronoun we use when talking directly to someone in a formal context, such as to a boss, a teacher or someone you consider higher than you in a social hierarchy.

Its conjugations are the same as él and ella. The good news is that usted does not differentiate gender, so the pronoun will always be the same:

Usted debe volver mañana.
(You have to come back tomorrow.)

Nosotros and nosotras are translated as “we,” but as you can see, the form changes depending on the gender of the people in the group.

You will only use nosotras if you are talking about a group of only women. If it is a group of all men or a group of mixed genders, you will use nosotros:

Nosotros vamos a ganar.
(We are going to win.)

Mi novia y yo nos queremos. Nosotros somos muy felices.
(My girlfriend and I love each other. We are very happy.)

Ana y yo hemos aprobado. Nosotras Habíamos estudiado mucho.
(Ana and I have passed. We had studied a lot.)

Here we have yet another pair of pronouns that are translated into English as “you.”

In this case, we have the informal “you” pronouns, which are used when you are talking directly to two or more people you know well.

As you can see, this also has two different forms in Spanish, one masculine and one feminine. The rules are the same for which form to use as nosotros:

Ellos and ellas are the third person plural personal pronouns, which translates to “they.”

Once again, ellos is used for all male and mixed gender groups, while ellas is for groups that only have females:

(Ana + Lucía) Ellas son de Murcia.
(They are from Murcia.)

When we have a formal situation and we are talking directly to a group of people, we have to use ustedes.

Like with the form usted, the plural ustedes is not gender specific. So the pronoun will remain the same, no matter what the genders of the group are:

¿Tienen ustedes alguna pregunta?
(Do you have any questions?)

Ustedes tienen razón.
(You are right.)

¿De dónde son ustedes?
(Where are you from?)

When talking or writing in Spanish, you almost never need to use personal pronouns unless you want to emphasize or specify.

Spanish speakers will understand who you are talking about based on the conjugation of the verb.

For example, rather than saying, “Yo tengo 27 años,” you would say:

As you probably know, there are as many varieties of Spanish as there are Spanish-speaking countries.

Normally, different regions have similar grammar, vocabulary and usage, but there are times when you can clearly see the differences, especially between Castilian Spanish and Latin American Spanish.

One of these main regional differences can be found in personal pronouns, or more specifically, vos and vosotros.

Vos has the same meaning as tú, but it is only really used in Argentina, Paraguay, Uruguay, Chile, Nicaragua, Guatemala, El Salvador, Honduras and Costa Rica.

You will never hear vos in Spain, but people will know what it means no matter where you go. Here you can see that it is interchangeable with tú:

Although we already touched on vosotros, it is good to know that this personal pronoun is mainly used in Spain.

I was born in Andalusia, and I noticed that many people in this region, me included, use ustedes with an informal meaning like Latin America.

The difference is that instead of adding a third-person verb, we use the second-person plural!

I know this seems complicated, but it is interesting to note how much one language can change even within one country!

In many ways, Spanish and English personal pronouns are quite similar, but there are some crucial differences:

Here are six fill-in-the-blank sentences. Try to fill in the blank with all possible personal pronouns as some have more than one correct answer!

2. Vosotras. The a in the word rubias (blonde) is a tip-off that the speaker is talking to all women.

4. Él, ella or usted. The verb es from ser (to be) can go with any of these three pronouns.

5. Nosotrosor nosotras. The word vamos (to go) needs to go with the pronoun “we,” but depending on the gender of the speakers, you must choose either nosotros or nosotras.

6. Ellos, ellasor ustedes. Like with number 4, there are three possible answers here.

Already feeling great about this lesson and hooked on pronouns? Check out our other Spanish pronoun guides for even more valuable information:

You can also immerse yourself in Spanish movies, music and books or check out a language learning program to help you learn and practice Spanish pronouns.

FluentU is one option for this, as the program comes with a video library containing clips from movies, vlogs, music videos and more, which all feature native speakers.

This way, you can watch the videos and read the interactive subtitles to see how pronouns are used in native speech. You can also add words from the subtitles to a personal flashcard deck and take after-video quizzes for additional review. 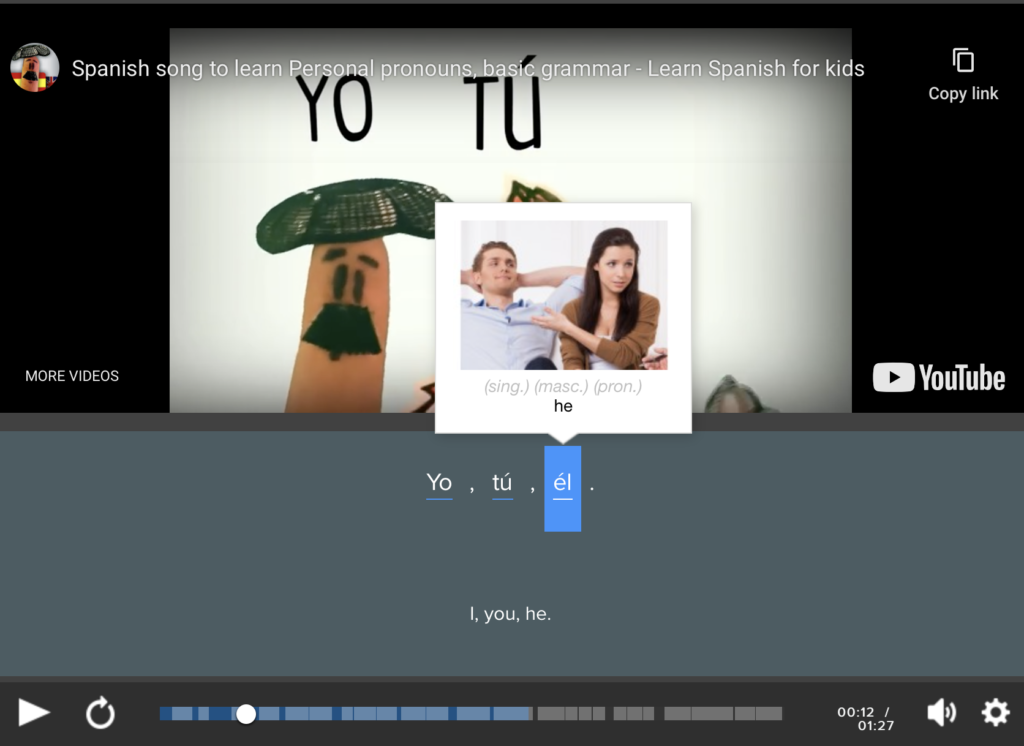 Other than the website, FluentU is also available on iOS and Android.

Now you should feel more confident when using Spanish subject pronouns. The more you practice, the better you’ll get!