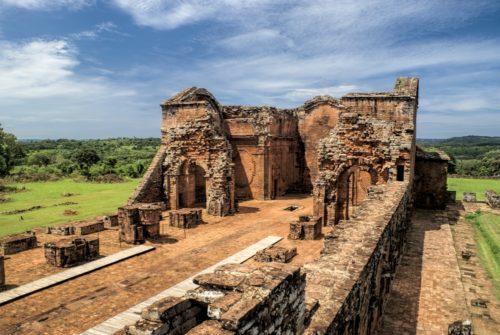 It’s hard to be in the middle!

Sitting right in the middle of South America is a landlocked republic that doesn’t always get the attention it deserves from Spanish learners.

When planning a trip or choosing a regional Spanish to study, you might think of Brazil, Argentina, Peru or Colombia before your mind wanders to the striking landscape and unique language that can be found in Paraguay.

We’re here to set that straight!

Whether you plan on traveling to Paraguay, want to meet new Spanish-speaking friends or simply feel curious about variants of the Spanish language, there are many intriguing linguistic gems to be found.

Keep reading to learn more about what makes Paraguayan Spanish special and where you can hear it, plus six key pronunciation, grammar and vocabulary tips that’ll get you sounding like a local!

Why Focus on Paraguayan Spanish?

Guaraní is spoken by the masses and is an undeniable part of Paraguay’s identity, with politicians and the elites speaking it as fluently as the regular Paraguayan next door. Approximately 90 percent of the population speak Guaraní, although only an estimated five percent of the population is actually indigenous—numbers unique to Paraguay compared to the rest of Latin America.

The result is a very interesting mix of Spanish and Guaraní that ended up being called Jopará or Guarañol! Ready for a delicious language salad?

Perhaps one of your future travel plans could include visiting La Santísima Trinidad de Paraná near Encarnación and exploring the ruins of what used to be a small Jesuit colony. Looking to experience Paraguay like a native? Try drinking the traditional, incredibly popular and omnipresent tereré (infusion of yerba mate) or visit the murals and street art that brought Asunción a new breath of fresh air!

Looking for natural landscapes? Why not visit the dunes of San Cosme and Damian or the caverns of Vallemi? Paraguay gives you the natural, the historical and the urban, all in one!

A major producer of hydroelectricity and home to the world’s largest generator of renewable energy, Paraguay offers a world of opportunity and challenge for entrepreneurs who dream of making an actual difference and escaping saturated markets.

Where to Practice Paraguayan Spanish

We’ll teach you the ins and outs of Paraguayan Spanish below, but first: where can you hear and practice it? Check out these fun options.

Jam Out to Hit Paraguayan Music

A great way to start getting familiar with the sound and culture of Paraguayan Spanish is to enjoy catchy Paraguayan songs.

Worried that you might not be able to understand these fast-talking native speakers? FluentU is a great resource that makes authentic Spanish videos accessible to any level of learner. You’ll get real YouTube clips as well as movie trailers, music videos, inspiring talks and more, that’ve been transformed into language learning experiences.

Each video comes with interactive captions. Just click any unfamiliar word for an instant definition, native pronunciation and visual learning aid. You’ll also get links to other videos that have the word, so you can hear how it’s used in different contexts or different regions. Then, FluentU’s “Learn Mode” creates flashcards and exercises for the videos so you remember new words after you’re done watching.

The videos are organized by genre and level, so it’s easy to find something that works for you. Get started with this cute video about a young Paraguayan boy named Orlando, then explore the full video library for free with a FluentU trial.

As in any country around the world, Spanish won’t sound exactly the same in all regions of Paraguay. However, there are some overarching tips we can share that’ll make your life easier learning Spanish from Paraguay.

Paraguayan Spanish shares some aspects of pronunciation with other Spanish-speaking countries in Latin America. That being said, Paraguayan people will often turn an “s” into a soft “h.”

Talking to a Paraguayan friend, you may notice that the expression más o menos (more or less) would sound like “máh o méno.” The word español (Spanish) would also sound like “ehpañol.”

Can you guess how the sentence Estamos juntos y hablamos español (We are together and we speak Spanish) would sound? If you placed your bets on something similar to “Ehtamo junto y hablamo ehpañol,” you’re correct!

Check out how these tips would actually sound when spoken by a Paraguayan.

In some regions of Paraguay, the letters “tr” as in trabajo (work), trio (trio) or trampa (trap) could be pronounced with the sound of a very soft, quick “tch.” Think “tchabajo,” “tchio” or “tchampa.”

Additionally, it’s not uncommon for the “r” at the end of a word to be strongly pronounced and somewhat exaggerated when talking enthusiastically, fervently or jokingly about a topic. Not only does this strong “r” sound flow easily within the language, it also helps the message come across as funnier or stronger:

¿Dónde está mi celularrrrrr? (Where is my cellphone?)

In some variations of Paraguayan Spanish, the “r” will be pronounced very similarly to English, and only in particular words within a sentence—you can see how that would sound by clicking this Paraguayan YouTuber’s video and watching out for the 0:11 to 0:16 mark.

3. Get Familiar with Vos

If you plan on spending time with Paraguayan friends, you may notice they often use the word vos instead of tú to refer to “you,” the second person singular.

The verb for this is vosear. The replacement of tú with vos is a major departure from Castillian Spanish and even from the Spanish of other Latin American countries!

Other common examples include:

Do keep in mind that although intuitively the word vos would sound pretty formal, it’s used in Paraguay informally, such as between friends or mother and child. Also, it’s not unusual for vos and tú verb conjugations to get mixed up in the same conversation, sometimes by the exact same person!

Ready for a healthy dose of eccentric pronunciation quirks?

For words that have the letter “y” at the end, as in the previous examples, the regular sound “-ee” will do. You’ll be safe!

However, when sneaking into the beginning of a word, it’s extremely common for the letter “y” to be pronounced as a soft “j.”

Remember: the final sound will always be a very soft blend between a “y” and a “j.” Make sure you don’t draw too much attention to the sound, and keep it smooth!

Now that your “y” is in shape… prepare for another sound swap. We know, we know… letters just love playing hard to get in Paraguay, but with some dedication and an attentive ear you’re certain to nail it!

As it happens with other versions of Latin American Spanish, in Paraguay the digraph ll (or double “l”) will regularly adopt the sound of… a “y.” That’s right! Check how the following words would be pronounced:

As in the previous case of the letter “y” becoming somewhat similar to a “j” sound, here too you must be careful not to exaggerate and instead go for a smooth blend between “ll” and “y,” as there won’t always be a clear distinction between one and the other when talking to native speakers.

Due to its peaceful coexistence with Guaraní, Paraguayan Spanish uses several phrases that are translated from the indigenous language, creating a whole new swath of expressions you won’t find anywhere else.

Take, for example, the expression Te voy a contar ahora después (literally, “I am going to tell you now later”), which comes from the Guaraní expression Amombe’úta ndéve anga upéi.

Mixing up the words “now” and “later” in the same sentence seems counterintuitive and strange, but happens regularly in Paraguay to emphasize the time when the action will actually take place! In this case, Te voy a contar ahora después indicates that you’d tell somebody something later, but with the intention of it being pretty soon.

Then there are some short, super versatile words and phrases that pay homage to Guaraní, including:

Other Paraguayan expressions you can count on:

Want to hear how Jopará, the very common mix of Spanish and Guaraní, would sound like when spoken by a native Paraguayan? Check out this video from Wikitongues!

Now that you’ve been introduced to Paraguayan Spanish, make yourself a delicious homemade tereré, prepare a playlist of your favorite Paraguayan hits, get vos on the tip of your tongue… and get ready for your Paraguayan Spanish to become 100 percent purete!