Our 9 Favorite Spanish Series on Netflix in September 2022

There’s nothing quite like a great Spanish TV series. They’ve got romance, drama, slapstick comedy, you name it.

As added benefit, they can open your eyes and ears to a whole new part of the world.

As a team of avid Spanish learners and teachers, we spend more time than we’d care to admit watching Spanish series on Netflix.

So we figured, why not turn all that binge watching into something helpful? For your enjoyment, here’s a list of our team’s favorite Spanish series currently on Netflix in September 2022.

To add to the rise in popularity of high school dramas, “Élite” follows a group of students in their final years of school. But this isn’t your average high school. The students of Las Encinas (The Oaks) are primarily affluent, unusually good-looking and seem to have very bad luck.

This mystery-thriller series can be pretty addictive and binge-worthy.

After her husband’s mistress exposes the family secrets, wealthy matriarch Virginia attempts to save face and maintain their perfect image.

This dark comedy begins with the discovery of a body at an engagement party—who happens to be the lover of the groom—but that’s just the tip of the drama iceberg.

“La Casa de las Flores” will help you become familiar with Mexican Spanish pronunciation and vocabulary, as well as social inequality issues in Mexico. It’s a great series for improving both your language and cultural knowledge.

You also can find a snippet of this show on FluentU—where interactive subtitles make the videos much easier to understand and learn from. 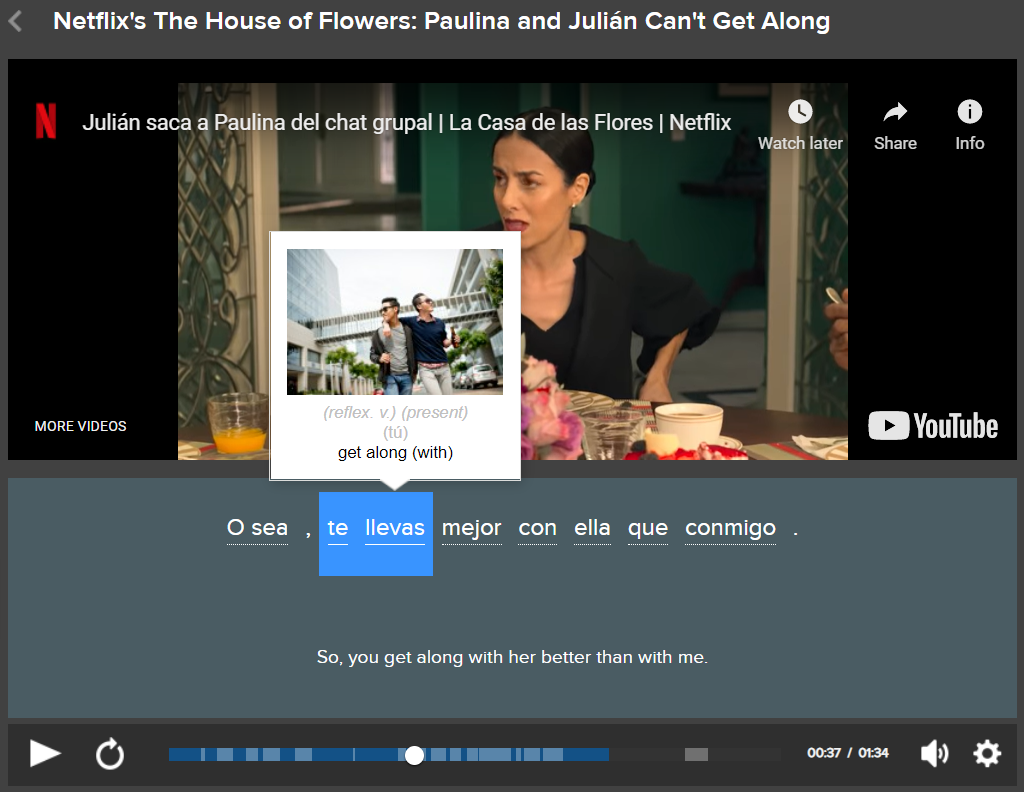 So, instead of having you passively watching, FluentU turns these engaging videos into immersive language lessons which expose you to Spanish as it’s really spoken by natives.

After inheriting a soccer team from their late father, this Mexican comedy follows a brother and a sister as they clash over issues regarding their club. Naturally, a power struggle ensues from the very beginning due to their completely different personalities—and probably just the fact that they are siblings.

With a few plot twists and laugh-out-loud moments, you’ll find it an easy-watching series.

This crime drama series, known in English as “Money Heist,” is about a group of, shall we say, “talented” people brought together by a criminal mastermind known as “The Professor.” Their plan? To pull off the risky job of using the Royal Mint of Spain as their own personal money printer.

“Monarca” tells the story of a woman who returns to Mexico to compete for control of her family’s billion-dollar empire, after living away for 20 years. There is plenty of drama, murder, betrayal, deception and storylines involving love and partnerships.

This series gives you a possible glimpse at what life in Mexico can be like in terms of cultural issues—you’ll see how some of Mexican society views economic classes, sexuality, reputation and corruption.

Funny, awkward, life-affirming and ultimately uplifting, “Paquita Salas” is a great Spanish comedy series. The titular character was a talented agent in 1990s Spain, but an outdated style and the loss of her biggest client caused her career—and life—to come crashing down around her.

The characters in the show have numerous, everyday conversations including plenty of slang and a bit of naughty language.

“Las Chicas del Cable” was one of Netflix’s first Spanish-language original series and it’s been received well by critics and audiences.

Set in 1920s Madrid, the show is a period drama that follows the lives of several young women who work at a telecommunications company.

The show highlights the interesting and complex relationships among its female protagonists, who come from many different walks of life.

Watch this show to be immersed in Castilian (and specifically, Madrileño) Spanish. It’s a great way to train your ear to understand the Castilian Spanish lisp, as well as to familiarize yourself with Spain-specific vocabulary.

“Ingobernable” is another Netflix original series set in Mexico.

The show follows Emilia, a Mexican First Lady whose disillusioned with her husband but has high hopes for her country. But when the President suffers a mysterious death, Emilia suddenly finds herself on the run—unable to prove that she herself wasn’t responsible.

“Edha” is a dramatic thriller set in Buenos Aires. The title character is a young single mother and a powerhouse in the fashion industry who falls for a young and mysterious man. Expect crime, set-ups, strange deaths—everything to keep your adrenaline pumping.