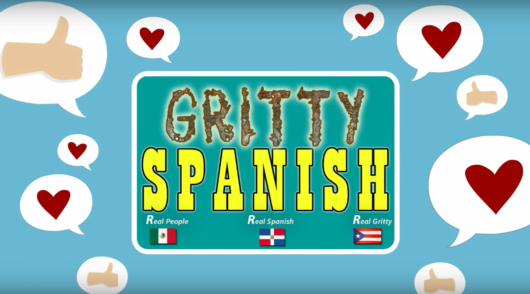 The Gritty Experience: A Review of the Unique Gritty Spanish Learning Program

You’re packed like sardines on the train with smelly passengers.

This traffic jam is lasting forever, and it’s driving you nuts.

Your friends are telling dirty jokes and doing some friendly smack-talk over your fifth round of beers.

Your favorite sports team is bombing, totally breaking your heart during the big game.

Life isn’t all sunshine and rainbows.

As a Spanish student, you can spend years learning pleasantries and polite phrases for interacting with people—but what do you say when things aren’t quite so pleasant and polite?

What do you say in Spanish when someone insults you, curses you out, shouts at you or tries to rob you?

When you step on a Lego or stub your big toe?

If you’ve only learned Spanish from textbooks and classrooms, then you’ll probably find yourself at a total loss for words.

This is where Gritty Spanish comes in.

But before we begin: This post contains affiliate links. By using these links to check out and purchase the program, you’ll be helping to fund more great content for our blog. Thank you!

What Is Gritty Spanish?

Gritty Spanish is a learning program for Spanish students who want to know real-life Spanish, uncut and unfiltered.

The focus is on listening and reading. Each Gritty Spanish program is laid out in a series of audios and PDFs which can be paired up together.

And I know it says “gritty” right in the title, but the first audio I played—of an enraged woman picking a fight on a subway train, lobbing insults at other passengers—definitely took me by surprise. My husband (who’s a native Spanish speaker) walked by and was like, “what the hell are you listening to?” When they say gritty, they mean gritty.

Every Spanish curse word you’ve ever wanted to know is thrown into these dialogues repeatedly, so you’ll get a chance to hear them in action. But of course, it’s about much more than curse words. It’s about immersing you in Spanish as it’s actually spoken by native speakers in all their moods, from pure happiness to disgust and outrage.

It’s just not afraid to be honest about how people actually speak, and the types of unsavory things they might say. I have to say, that’s pretty damn refreshing.

The Coolest Features of the Gritty Spanish Combo Pack 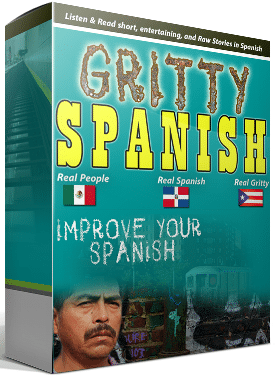 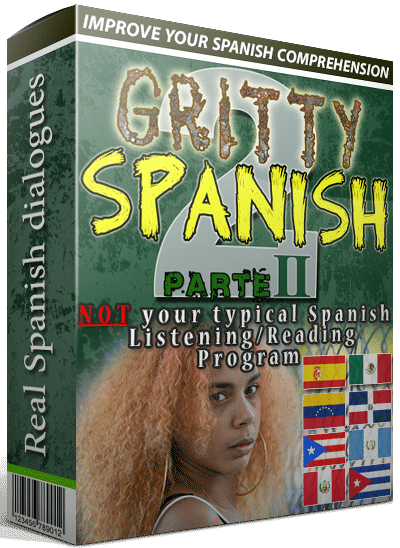 The audio files are all clear as day, and the dialogues are spoken evenly and cleanly, even when slang and accents abound. All in all, it’s not a strain to listen to these audios.

The audios also have ambient background sounds to make the whole audio experience more realistic. If the audio takes place on a smelly subway train car, then you’ll hear the train brakes squealing, the conductor making muffled announcements and passengers murmuring in the background.

The OG Gritty Spanish has 31 audio files, and Parte II has 36. Each audio file comes with: 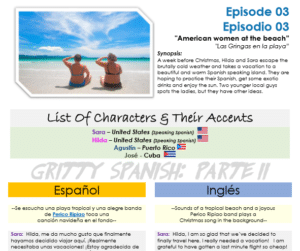 As I was making my way through Gritty Spanish Original, I made a little note saying, “they should have included definitions for weird words, slang and idioms in the PDFs.”

I felt that this was missing, because these types of words and phrases often require more explanation than a direct English translation can provide—learners need to see a little more nuance to truly understand the Spanish in these cases. Then I got to Gritty Spanish: Parte II and found exactly what I was craving.

The PDFs in Gritty Spanish are clickable, highlighting every weird word or phrase that requires more explaining to get the meaning across. Just click or tap the word in question, and you’ll be taken to a full definition with regional notes. So, I’d highly recommend working with the combo pack and starting with Gritty Spanish: Parte II if you need more support.

Hey, there’s nothing wrong with eating the pizza crust-first.

I’ve spent over three years of my life living abroad in Latin America—in coastal regions no less, which are known for their fast-talking, slang-slinging residents—and I also frequent Queens, Harlem and the Bronx, where Spanish is everywhere. While this program is a good peek into the grittier things that Latin American Spanish speakers say, it’s especially relevant if you’re living in the New York City area.

For the Gritty Spanish Original series, there’s a PDF provided that lists the nationalities of the speakers in every dialogue. In Parte II, this is noted front and center at the beginning of each dialogue. Either way, that’s essential information. Make sure you pay attention to that, because the curses, slang words and accents do vary quite a bit due to the diversity of voice actors!

Included with my combo pack was a folder with audios and a PDF for 50 positive quotes. You see? It’s not all negative. Gritty Spanish gives you a little pick me up.

The audio for each quote is separate, and helpfully titled with the regional variety of Spanish used.

Who Should Try Gritty Spanish?

The language can be a bit complicated in places, so I’d recommend this program for intermediate learners and above. However, the program does have features—like the clickable transcripts with notes in Parte II, and the slowed down audios—that make the dialogues approachable at an upper-beginner level. If you’re a slightly more advanced beginner who knows all the basics, and who’s been focusing on conversational Spanish during the beginner stage of learning, you should be A-okay.

That said, if you’re more of a beginner, you might end up absorbing too many dirty words and whipping out really inappropriate Spanish when you shouldn’t. In earlier stages of learning, make sure that Gritty Spanish is more of a supplementary tool, to keep you entertained and learning new things. Keep your main study focus on more polite and neutral Spanish.

It’s rare that the exact same Spanish program works for such a wide range of skill levels, from upper-beginner to advanced. But that’s what we get with this program. Even if you’re approaching Spanish fluency, you may never have learned how to curse properly. You may know grammar backwards and forwards, but you can’t understand any Spanish spoken with a heavy Dominican accent.

Gritty Spanish can help fill in the kinds of gaps that formal language courses and Spanish textbooks leave behind—gaps that only real-world experience can fill.

Your main priority is conversational fluency.

You love cursing in your native language and can’t live without your favorite insults.

I’ll be straight with you. This is totally me. I swear all the freaking time in real life, even with my mother. Actually, it’s my mother’s fault I’m like this—blame her!

Yet when I started speaking Spanish, I was only able to speak Spanish like a goodie two-shoes, or a sweet, pious nun. That’s what my textbooks and teachers taught me. And I’ll tell you right now: It’s eternally frustrating when you don’t sound like you in a foreign language. You’ll get this weird feeling that you have a whole different personality every time you open your mouth.

Gritty Spanish will let you find your own special brand of Spanish, allowing you to finally sound like yourself and unleash your true personality, with all your glorious imperfections and attitude.

You want to understand everything you hear in Spanish.

Okay, let’s say you don’t ever curse in English and you don’t have the nerve to yell at someone, even if they’re robbing you in the street. It’s still valuable to learn the dark side of Spanish.

You’ll hear grittier Spanish used in movies, T.V. shows and reggaeton music. Your taxi driver might shout something cheeky at the guy who cut him off. Your Spanish-speaking girlfriends might need to vent about annoying dates over cocktails. Your suegra (mother-in-law) might even have an awesome dirty joke to tell you.

Don’t you want to understand everything you hear in Spanish and laugh along with life, rather than blinking innocently and asking for explanations like a two-year-old?

You’re not shocked by scandalous topics or vulgar language.

I loathe stifling political correctness with every fiber of my being, especially when it’s foisted upon Latinos, who are probably some of the most hilariously politically incorrect people you’ll ever meet. This goes beyond a language lesson and starts verging on a cultural lesson.

If you’ll be offended by curses and vulgarity, or thrown into a moral outrage by salacious or politically incorrect topics, then find another program to learn with. Skip Gritty Spanish, and let the rest of us have our fun!

If you’re open-minded enough to embrace Spanish and its messiness, then you’re going to love Gritty Spanish. It’s a wild ride through the ups and downs of real, honest-to-goodness life, it will continually take you by surprise and you’ll never be bored with it. It genuinely made me laugh out loud a bunch of times. How many language learning programs can do all that?

All around, I’m giving Gritty Spanish a huge thumbs up. Two thumbs up.

Take Gritty Spanish for a spin with its sample materials for interested learners, and you’ll finally see what your Spanish study routine was missing all along.

If you love learning with authentic and unique content, you’re going to love FluentU!