Do you know what happened to the soon-to-be-wed mouse?

Or why the crying woman is trapped between the living and the dead?

If not, it sounds like we have the pleasure of introducing you to famous short stories in Spanish!

These well-known gems are quick to read—some even easy enough for beginners—yet they’ll still open a window into rich culture for you to explore. (Not to mention all of the language benefits for Spanish learners…)

You’ll have no problem staying engaged with the interesting plots, so if you’ve never given short stories a try before, begin today!

Here are five famous tales to get you started, plus all of the tips you’ll need to maximize your learning with this rewarding source.

There are countless benefits to reading famous Spanish short stories. It’s an easy way to learn about Spanish beyond the textbook, and a great opportunity to see the language flow in a natural context.

The length is also an unbeatable selling point. Since they’re so approachable, you could easily focus on one story per week to build up your reading skills. Or before committing to a full novel, you can explore these short stories to find an author who interests you.

You’ll also diversify your Spanish by learning about different cultures associated with the language, and by seeing differing styles of writing and perspectives.

Seeking out stories in Spanish that are already famous is always an easy place to start. They’re sure to have translations, summaries and additional sources online to make the first time reading in Spanish as stress-free as possible.

Plus, let’s not forget that all famous stories became well-known for a reason! So interacting with a culture’s most treasured stories will no doubt teach you their historical impact and how/why they came to hold such importance.

How to Maximize Your Learning with Famous Short Stories in Spanish

If it’s your first time reading a short story in Spanish, don’t go out looking for the Spanish equivalent of Shakespeare! But you probably already knew that, right?

So aside from basic tips—like trying to figure out words from context rather than looking them up right away in a dictionary and writing down new, important words/phrases—here are a few more ways you can use these stories to improve your Spanish level.

If this is your very first time dipping your toes into the world of Spanish short stories, feel free to take advantage of English translations. As mentioned above, since these stories are famous, it’s pretty easy to find decent translations online.

One effective way to use both versions is to read the story first in Spanish, and then read the English translation second to test your comprehension.

After reading the Spanish story at least once, looking at both versions side-by-side can really get you ahead on learning how the sentence structures compare. Choose a few sentences to pick apart one at a time, comparing the word order and translations with that of the English version. What grammar topics are illustrated? Which rules can you deduce from this real-world usage?

Once you’ve read the story, understand it and have pulled it apart for linguistic lessons, take 15-20 minutes the following day to do a bit of research about both the author and the historical/cultural significance of the story. Do all of your online searching in Spanish, of course, to get Spanish results!

Again, since they’re famous, you could also search for short story materials made for native Spanish speaking students, such as study guides, discussion questions or videos.

Have you ever seen someone live-tweet an event, like the Superbowl, a movie, a conference or a presidential debate? You can do the same on Twitter while reading one of these short stories!

Live-tweeting usually involves tweeting your thoughts/reactions during the live event (in this case, while you read the story). Capture your surprise, laughs, disgust, confusion—whatever emotions arise!

Often times speakers are quoted directly in tweets as well, so feel free to quote your story too. At 140 characters per tweet, writing in Spanish becomes very approachable.

While being informative, it’s also a great opportunity to try and be funny! Do this with a friend or exchange partner for double the fun.

Finally, be sure to use new phrases and vocabulary soon after reading, so that they can become a part of your base knowledge. Here are a few ideas of different ways you could do that:

By using any of the above tips, you can squeeze so much valuable learning from a single famous short story.

Supplement your learning with other authentic materials

Using authentic material like short stories is an excellent way to see the language in use the way it’s actually spoken. You can find even more authentic material on FluentU, which is perfect for the more visual learners out there!

How to Find More Great Spanish Stories on Your Own 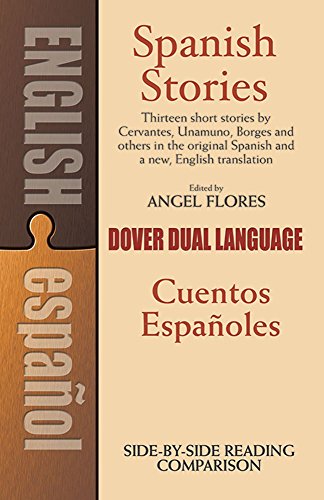 If you find the five stories below helpful and are left wanting more, here are a few places to find some more on your own.

The website E-stories has short stories, poems and more for you to browse through. All organized by genre, you’re sure to find exactly what you’re in the mood for! You can change the language to “Español” up at the top.

A book that contains a collection of short stories in Spanish with English translations parallel is “Spanish Stories — Cuentos Españoles” by Angel Flores.

Or if you would like to start off a little slower and easier, here’s a website with 50 children’s stories in Spanish.

This story has been floating around for centuries. Starting off orally, it was put to paper in “Lágrimas” by Fernan Cabellero in 1839.

There are quite a few different versions of this story, but it mostly involves a soon-to-be-wed mouse, her many suitors and a cat. While this tale may sound a little dark, it’s widely used as a children’s book because of its moral and educational value.

If it’s your first time reading a short story in Spanish, this is a great one to start with. Having just a few hundred words in length, it’s short, simple and easy to get through.

Many Latin American cultures are known for being superstitious, and it happens to make for some of the best myths and legends. “La Llorona” originated in Mexico and has been told and retold over the centuries.

It’s about a woman, who in a second of madness from her husband’s abandonment, drowns their children. After she realizes what she has done, she then drowns herself, leaving herself trapped between the worlds of the living and the dead.

Legend has it that she wanders the Earth to this day, and parents often use this tale to keep their children from going out late at night. “La Llorona” is one of the most widespread legends in Mexico and through Central America, so much more has developed from it online, including videos, essays, extensions and translations.

The story is not very lengthy or difficult to get through, and you can even download a short version of the story that comes with the background story as well as comprehension questions here.

Translating to “ugly woman” in the indigenous languages of Central America, there are many different versions of the tale, but they all share the character La Sihunaba (who is also sometimes referred to as “Siguanaba,” “Cigua” or “Cegua”).

Similarly to La Llorona, La Sihunaba is a wandering ghost, only she specifically targets men.

The story starts with a woman who is originally referred to as La Sihuehuet, which translates to “beautiful woman” in the language of origin. After she was cursed by her husband who discovered she was having an affair, the woman became La Sihunaba to forever haunt the region.

To this day, after disguising and portraying herself as an attractive female, she finds men in isolated areas and tempts them with her beauty. After they reveal themselves as unfaithful, she reveals her face to show what she truly is: a hideous, soulless creature with the face of a horse.

This tale, along with many others of similar genre, are extremely popular in Latin American culture. If you enjoy “La Sihunaba,” you’re in luck because there are tons of similar stories available in the Spanish language.

“La Muñeca Menor” is a unique short story written by Rosario Ferré that has been enjoyed by many for its unpredictability. The story is about a woman, who, after bathing in a river, receives a bite from a river bug that damages her leg severely, leaving her disabled.

As a wealthy widow and the aunt of three nieces, the doctor she had kept for years begins to take advantage of the sickly woman. While she could have been cured, the doctor keeps her as a patient through the years for his own monetary gain.

While it’s only a few pages in length, “La Muñeca Menor” has been frequently used in literature classes and many critical essays have been written about the short story.

Classified in the genre of magical realism, this story is not only surprising and entertaining, but also symbolic and aims to teach a lesson. Because of this, it’s a bit higher-level than the others on the list, but because the story became so widespread, there are many translations and additional resources available to help.

Though the author Rosario Ferré passed away in 2016, she still remains one of the most honored writers in Puerto Rico. Ferré wrote many celebrated stories, translated them herself into multiple languages, won awards and even temporarily served as the First Lady of Puerto Rico! A book containing a collection of her most enjoyed works, including “La Muñeca Menor,” was released under the title of “Papeles de Pandora.”

It was published by Colombian author Gabriel García Márquez, who is the same author of one of the most widespread books in Spanish and in English, “Cien Años de Soledad” (One Hundred Years of Solitude).

The title and main character of the story is María Dos Prazeres, a Portuguese name that means “Maria of Pleasures.” The story is a bit out of the ordinary and open to many interpretations. It is just a few pages in length, but has become quite a sensation.

The story is about an elderly woman who had a vision of her death. With this, her life changes drastically as she begins anticipating her death and carefully preparing for every aspect of it. Then after years of obsessing over it, she finds that there was a error in the vision she had.

“María Dos Prazeres” is gravely unique and follows a similar theme as the other twelve shorts in the book, which are mostly about death and illusions.

While the stories in “Doce Cuentos Peregrinos” are fairly short, they do contain quite a few words that may be confusing, so be sure to keep your trusty dictionary and translator handy for this one.

Over the past few decades, this book has become quite popular, so there are many additional resources and discussions online to help, which can be found with a Google search of the title. Also, the entire book is available for a free download here.

And there are our five famous short stories.

Now you’ve got plenty of reading to keep you entertained as well as productive!