Have you ever found yourself struggling to end your sentences with a bang?

Like a “bang” that screams “I’m a grammar guru?”

Or perhaps you’ve been listening to native Japanese speakers’ sentences and realize that you hear a certain word quite often, but yours still sound like something’s missing.

If you’ve been listening (or reading) Japanese for a day or 10 years, you’ve likely stumbled across the mysterious word です (desu) at the end of many sentences.

But do you know what it truly means?

My Japanese teacher would always punctuate the end of her sentences with a very powerful です (desu).

Anytime we spoke in our Japanese class, we’d be aware of her デス（です Glare）— Death Glare. See what I did there with the katakana?

Alright, but cheesy Japanese puns aside, there was a reason why she was so keen on her students knowing the です meaning.

It had more to do with politeness than grammar, but both are important! So let’s get to the meaning and usage of です.

Solving the Mystery of the Meaning of Desu

What Is the Meaning and Usage of Desu (です)?

Put in the simplest terms, です means “to be” and comes at the end of a sentence, as all Japanese sentences follow a subject-object-verb pattern.

You can conjugate です but it has some limitations that we’ll get into later. です also has different levels of politeness depending on the context of the conversation.

です Is a Copula or Linking Verb Meaning “To Be”

です connects subjects and predicates. The best practical example would be when you tell someone your name.

As you can see, です can make up some of the simplest sentences in Japanese!

いる and ある are also verbs but don’t perform as copulas. They mean “to exist” or “to be”—with いる corresponding to living things and ある referring to non-living things.

Talk about having an existential crisis in Japanese!

The differences aren’t too hard to nail down, as you’ll see in these examples.

です can combine sentences so your conversational Japanese sounds less staccato and more natural. You wouldn’t connect sentences with と, which is used to connect nouns.

Similar to Japanese godan verbs, です has a て-form (or, connecting form), which is で.

授業の試験は今日で、発表は来週です。
じゅぎょうのしけんはきょうで、はっぴょうはらいしゅうです。
The test is tomorrow and the presentations are next week.

Be sure not to confuse it with the location particle で, which you’ll see here:

日本では今週はゴールデンウイークで、アメリカでは今週はスプリングブレイクです。
にほんではこんしゅうはごーるでんういーくで、あめりかではこんしゅうはすぷりんぐぶれいくです。
It’s Golden Week in Japan and Spring Break in the US.

It’s best to hear how です is correctly pronounced, so hit play for this quick video on the です pronunciation.

The “u” does not make a sound for voiced consonants, similar to how the polite endings of verbs are pronounced. For example, 食べます（たべます）— to eat, sounds like tabemass, instead of tabemasu.

It might seem odd at first to silence the “u” sound. As you hear more naturally spoken Japanese, however, it’ll become second nature.

The 4 Forms of Desu (です) You Need to Know

です Is the Polite Form (and Most Common)

To be on the safe side, it’s best to use the polite form, which is です itself.

Not using です at all leaves your sentences “hanging.” Using the polite form ensures not only that your sentences are grammatically correct, but that they’re also not offensive.

でございます Is the Respectful Form and Used in Formal Situations

If you’re familiar with 敬語（けいご）— polite speech, you know that several verbs have different levels of politeness.

でございます is considered a very respectful form of です and has the same meaning.

You might find it written in email correspondences or on website pages. But it isn’t rare to hear it spoken in meetings and during presentations. It all depends on your audience.

だ Is the Casual Form and Used in Informal Situations

だ is the lowest level of politeness. Thus, using it can sound very straightforward.

Similarly, 何方様ですか（どなたさまですか）— is very polite and basically means “May I ask who might you be?”.

である Is the Polite Form Used in Public Speech and Literature

Lastly, there’s the form of です you’ll most likely see written in newspapers or books: である!

である is actually a step down from でございます but more polite than です. It appears often in journalism and formal writing, so it’s good to know for learning how to read the news in Japanese.

Check out the Asahi Shimbun (Asashi Newspaper) in Japanese to see this form in its natural habitat!

As I mentioned before, you can use です in different tenses.

The past tense of です is でした.

And of course, you can link different statements together. And guess what? They don’t have to be in the same tense!

昨日は私の誕生日でしたが、今日は妹の誕生日です。
きのうはわたしのたんじょうびでしたが、きょうはいもうとのたんじょうびです。
Yesterday was my birthday but today is my little sister’s birthday.

There’s also the presumptive form used for uncertainly and presumptions. The polite form is でしょう.

The informal counterparts would be だ (casual form), だった (past tense) and だろう (presumptive).

What Does Desu (です) Mean with Adjectives and Verbs?

As you get further along in Japanese, you’ll encounter です with a mixture of other verbs and adjectives.

Note that this won’t change the meaning of other verbs or adjectives, but it might add some nuances.

です doesn’t just follow nouns. It can follow adjectives and verbs as well. But it won’t change the meaning or tense.

As I mentioned earlier, です connects the subject and the predicate. So it’s best to view です as the high-five that won’t leave your sentence hanging. However, です is usually omitted in casual speech.

Even if we take away です, the meaning of the sentence won’t change. The same goes for conjugating adjectives (yes, adjectives can be conjugated in Japanese—here’s a great conjugation tool to master those tricky forms).

Remember, because adjectives can be conjugated, です doesn’t function like the “to be” verb in English. So でした sounds unnatural here.

We already know what tense we’re using because of the way 寒い（さむい）— cold, has been conjugated!

Adding です to the end merely holds the subject and the predicate together. It can be left out entirely and still not change the meaning.

But it’s standard to use です with your superiors or people you might not know very well. です gives your Japanese a cushion. This is very important for not coming across as too strong or rude.

The Japanese language does play around with the “to be” verb in English, though.

For example, the term ワズ（わず）— was, and ウイル（ういる）— will, are used in Japanese internet slang.

Another unique part about adjectives and verbs is that they can cross over to form 〜たい, or, the “I want to…” form.

I’ve heard a baby scream this at his parents before. This baby even left out the particle for the object of the sentence. Not just because he’s mastered Japanese, but because of his close relationship to the people he’s speaking to—his parents (who did get him those strawberries, by the way!)

Expressing desire like this sounds very powerful, so you’ll want to soften the impact with です or even ~と思います（~とおもいます）— which literally translates as “I think that…” but acts as a humble sentence ending to display politeness.

Of course, if you’re by yourself and you’re really craving some caffeine, feel free to shout from the top of your lungs, コーヒー飲みたいな！（こーひーのみたいな！）— Geez, I really want coffee!

What About the (〜のです) Meaning?

The の particle goes at the end of a sentence to explain something to the speaker. Here too, です is optional and its presence depends on the style of speech. But it doesn’t change the meaning. 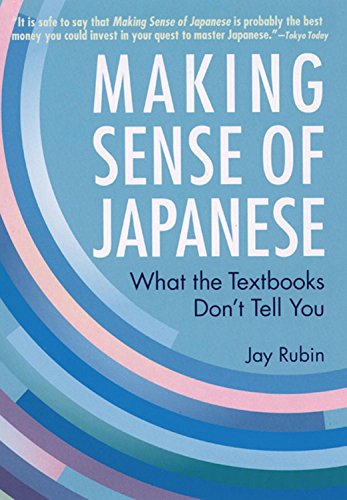 This is a very common sentence pattern. It sounds much more natural and less textbook-style. To learn more about, I highly recommend checking out Jay Rubin’s book “Making Sense of Japanese: What the Textbooks Don’t Tell You” to learn more about Japanese grammar!

Whew, what a rundown! By now, you have all the tools and knowledge you need to get out there and score some perfectly structured sentences. Although it comes in several forms and sizes, です is one of the most meaningful Japanese words out there!