When it comes to things being easy, comedian Maria Bamford said it best:

“People always say how easy it is to cook, but it is not any easier than not cooking.”

This pretty much sums up why I haven’t bothered to learn German yet.

Despite having ventured into the beginning stages of German and having significant interest in it, I still haven’t taken a serious crack at it.

Polyglot Benny Lewis—author of the e-book “Why German Is Easy”—mentions that despite his mastery of other languages, for a time German was “the one that got away.”

I wonder how many potential German learners can relate to that.

German is still not really considered a “cool” language to learn in the English-speaking world, so even if you’ve learned other languages and are not immediately intimidated by its grammar, you may put it off for a little longer because it doesn’t seem quite as sexy as Spanish or Italian.

(In my case, I got distracted by Russian, which many people may think is even more difficult and less sexy, but there’s no accounting for taste.)

Or maybe some potential learners have a genuine interest in German but are intimidated from the beginning by the grammar or simply how complicated it looks.

How long can those words even get? (Hint: Long enough to not fit on a single line of this blog.)

Either way, I’d suspect that a good portion of us are suffering from GLI: German Language Inertia.

We don’t think it’s the hardest language, but there are some things that are big and tedious-looking about it, and we need an extra push to feel confident and inspired.

Some of that inspiration, of course, needs to come from a love for the cultural elements linked to the language.

This is something we need to find on our own, whether by watching “Run Lola Run” for the twelfth time or itching to read a Hermann Hesse novel in the original.

I actually suspect that German may develop more of a reputation for being cool in the coming years, so that should help us, too.

But there are some things that you can do to just make learning German easier and make yourself feel more confident about learning it, and this is what “Why German Is Easy” is all about.

So why am I bringing this up right now? Because until Saturday, November 24th, 2018, The Black Friday Language Learner’s Collection is offering a bundle of the following FI3M (Fluent in 3 Months) products for only $197:

In other words, if you’ve been thinking about trying out any products from Fluent in 3 Months, now’s the time to go for it.

Here, we’re taking the opportunity to explain to you in depth exactly what you’ll be getting. You can check out our General Learner blog for a rundown of two other FI3M resources for your language learning: FI3M Premium and Conversation Countdown.

Here, we’ll be looking at “Why German Is Easy.”

This e-book is less about making an argument that German (or any other language) is particularly easy or hard, and more about focusing on the positive elements that can make it easy for you.

It’s also just a great resource for lazy beginning language learners, and we all love those, right?

Let’s lean in and take a closer look.


Who Can Benefit Most from “Why German Is Easy”?

What “Why German Is Easy” Can Do for You

This book focuses more on grammar and less on pronunciation and listening than the other books in this series—in fact, it focuses largely on grammar and vocabulary. I’m guessing this has to do with the fact that German a) is a phonetic language and may not pose as many difficulties for English learners in speaking it as other languages and b) has notoriously difficult grammar. 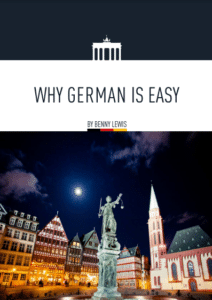 I do think it could have been useful to include some resources for connecting with native speakers, but this is just all the more reason to check out FI3M Premium and Conversation Countdown, too.

In any case, this book is a good way of getting your fears about German grammar out of the way in one chunk. It certainly doesn’t cover everything, but it gives you the confidence to run through the halls of the German language yelling at the top of your lungs rather than fearfully taking one dreaded step at a time.

It also leads you into the concept of online German language immersion, and comes with some bonus materials to set you up for browsing, communication and everyday immersion in German. This is exactly the kind of benefit for lazy learners I’m talking about. You get a limited amount of quality information in one place, so you don’t have to think about anything too hard.

A Closer Look: Summary Breakdown of “Why German Is Easy”

Part One: Grammar covers similarities between German and English, genders, plurals, cases, word order, adjective endings and significantly more. This is why it’s probably best to have a beginning knowledge of German, so your eyes don’t begin to glaze over. Don’t get me wrong, this is one of the least glaze-worthy explanations of German grammar I’ve seen, but it’s still German grammar. You don’t need much to tackle this part, though. If you’ve ever taken a German class, even if you failed it, you’ll probably be fine.

I appreciate the flexibility and open-mindedness of Benny’s approach here: He acknowledges that there are some things you probably don’t need to worry about right away and puts a helpful exclamation-mark symbol next to those items you can pass over if your intent is to start communicating ASAP.

However, he also acknowledges that this might not be everyone’s cup of tea: For example, some people recommend learning each new noun with its gender and working hard to get that gender (in the case of German: masculine, feminine or neuter) memorized immediately, so as to prevent confusion and more hard work down the line. But if you choose not to do that, it’s not going to greatly hinder your communication skills coming out of the gate.

In reading through these different parts of grammar, you can not only mentally prioritize what you need to learn first, but also pick up some helpful tips and tricks for squeaking by until you have done all the memorization work. For example, there are some similarities between the cases that can help you guess at a particular version of a word and be right a lot of the time. 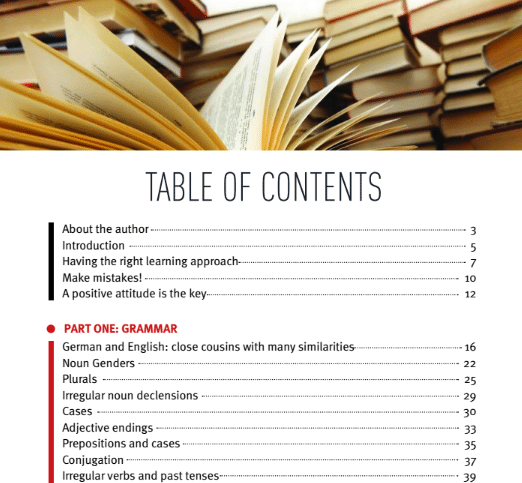 In general, Benny looks at making foreign grammar relatable and approachable to learners, even if this means learning the language in a less “pure” way.

Part Two: Vocabulary is by comparison quite short and covers tricks for building your vocab, including taking advantage of loanwords from English to German, Germanic words that are common to the two languages and international loanwords. It also contains a guide to German word formation, which can help you guess at the meanings of words you don’t know.

There are three bonus items that come with “Why German Is Easy”:

The German Digital Immersion Device Setup covers setting up all your devices for German browsing and typing (on Facebook, too). It also covers adding a German-English dictionary to your Kindle, which is something I’ve done myself for other languages and can wholeheartedly recommend.

The German Online Immersion Sample Daily Schedule includes an example of how you could fill an entire day with lots and lots of German study and exposure. This is, by the way, for regular people, who actually have jobs and stuff but would still like to learn German.

The German Anki Decks include flashcard decks for the online program and flashcards app Anki. Normally, you either have to make your own Anki decks or use those other users have made (which aren’t 100% guaranteed to be correct, of course), so this is a nice bonus. Decks included cover beginning, intermediate and advanced vocabulary as well as verbs and verbs with prepositions.

The fact that this book is grammar-heavy might seem like just one more intimidation piled on top of the intimidating German language, but trust me, it’s better this way. When I do make my commitment to learning German, I’ll be better off for having read it and remembering that there are actually a finite number of things I need to worry about grammar-wise. I can get right down to building my vocabulary and putting my own sentences together, however imperfect they may be.

As with the resources included in the bonus packs, I’m already familiar with many of the concepts in the grammar section, but seeing them all together really does help. Again, a lot of what tends to hold us back in language learning is pure laziness and inertia.

The truth is, you don’t have to get everything perfect right away and you don’t have to force yourself to do a lot of things you don’t want to do. You just need to take an interest, have an approach and more or less stick to it, and that’s what this book attempts to help you do.

More advanced learners and even intermediates may not find so much in this book that they don’t already know, but beginners can benefit greatly from it, as can those who gave up German years ago and would like to return to it.

You’ve already got enough to think about when you’re learning German.

“Why German Is Easy” will just make the journey that much less burdensome.

Elisabeth Cook is a freelance writer, language learner and literature lover. You can check out more of her writing on her blog, Lit All Over.