Germany is one of the main economic, political and manufacturing players in Europe—and arguably the world.

If you’re serious about learning German, Geschäftsdeutsch (Business German) is almost certainly going to be a hurdle you’ll have to cross at some point in your studies.

In this article we’ll be summing up exactly what Business German is and why it’s key for you to master it, and share some learning hacks as well.

So what exactly is Business German then?

Sure, it encompasses all the difficult words and phrases that you need to know for any business situation, but it also includes knowledge of German business culture and etiquette. You’ll need to know when it’s the right time to use certain tones and forms of the language. As we’ll show you later in this article, there’s a whole formal side of the language to master!

Business German is also terribly important when it comes to dealing with bureaucratic processes in Germany. From registering a new address (anmelden—see below) to organizing a German visa, there’s loads of situations in everyday life that will require your best professional German.

As well as increasing your overall fluency, Business German is a necessity if you’re thinking of applying for work in a German-speaking country.

First things first though, you’ll need it for your application.

If your German resume is up to scratch and you know all your lines for your interview, then great! That’s the first major step in breaking through to become a Business German pro!

However, it doesn’t stop there. Once you start working in a German office or other business environment, you’ll quickly realize just how much Business German you’ll be using. You need to be at the top of your game with specialized vocab and the polite form of German. Keep in mind that you’ll be using this formal language with everyone in the office, including colleagues who are on your level.

One further reason why it’s important to understand and speak business German: it is used throughout myriad bureaucratic processes that are found in German life.

If you ever choose to relocate to Germany—even if it’s just for a period of a few months to study or for work experience—you’ll be expected to visit the Bürgeramt (Citizen’s Office) as soon as you land to register your address (anmelden). This is just one of the many bureaucratic systems in place in Germany.

If your Business German is up to speed then you’ll easily sail through this! If not, then you could easily slip up and offend someone by accidentally using informal German with them. But worry not! It’s not quite as daunting as it sounds.

And we happen to have some great hacks to open shortcuts to Business German success.

6 Hacks to Improve Your Business German

Officially ready to polish up on your German for professional use? Follow our handy hacks.

1. Get to grips with Sie and du

One of the major differences between German and English is Sie/du.

In English, we have it easy. We only have one word for “you.” It doesn’t matter who we’re speaking or writing to, we can only address them with “you.” In German, it ain’t so simple.

When Germans are speaking to family, friends and children they address them with the du form.

It all depends on the person and type of organization that you’re working in.

Writing your Lebenslauf (resume) is great for practicing written German. And no, it’s not quite as simple as just translating your English resume.

Why can’t you just translate it all? Well, think about it. Some parts might not even be translatable.

German-speaking countries don’t have the same school system and qualifications, so you might have to explain a bit more fully about what it is you’ve studied.

You will be expected to include some information that you wouldn’t be asked for when applying for work in the States. Make sure to attach a photo of yourself and include your marital status. Any hobbies and your age also need to be on there somewhere. Might sound strange having to include these, but it’s the norm in Germany!

This might sound like a lot of effort, but hey, you’ll have a shiny new Lebenslauf and you’ll have also brushed up on your vocab in the process!

Check out this example Lebenslauf here.

There are loads of fun ways to help you better your listening. But listening to radio hosts presenting pop songs isn’t necessarily the best way to target your Business German skills.

One way to prepare your ears for the professional world is by watching TV shows that are set in workplaces.

One great example is “Stromberg,” the German version of “The Office.” It’s just as funny as the UK and American versions, and what’s more is it’s educational!

You’ll be able to see Business German in action, like how Germans go about using Sie with their colleagues. It could also be a good idea to have a notebook handy so you can jot down any useful vocab you pick up while watching.

Most “Stromberg” episodes are up on YouTube and on German Netflix.

Ok, so you’ve practiced some listening, now how about some reading?

One way to start reading is to try out some German newspapers—and it’s also an excellent way to learn just what exactly is going on in the German business world.

When choosing a newspaper, opt for a broadsheet such as Die Zeit or Die Welt. These will have slightly longer and more complicated sentences in than the tabloids. Much better for your improving your language! They’ll also use a much richer vocabulary in their writing.

Don’t want to splash out the cash on foreign papers? Fair enough—but most of their articles are also published online. So now you’ve got no excuse!

Here’s a more in-depth guide on how to learn German with newspapers and find the best German news resources.

Right, so that’s reading and listening done…time for some speaking!

If you haven’t found yourself a tandem partner already, then now is the time to do so!

What’s a tandem partner? It’s a native speaker of your target language, someone who will help you learn their language if you help them learn yours! Why not pick their brains about their experiences working in their home country (in German, of course!).

One great way of using a tandem to your advantage would be to do a bit of role play with them. Why not set up an interview scenario? They can play interviewer and you the interviewee. Not only is it great German practice, but it’ll also let you know what kind of questions are usually asked in German interviews!

Most language departments in colleges and universities will have processes in place to help with finding a tandem. They’ll often have a noticeboard of tandem adverts. You can look take a look to see if anyone if offering the language you’re after. If you’re not studying, websites such as MeetUp are great for finding German speaking events. You’ll be sure to find people willing to swap languages once you get out into the wider German-speaking community.

6. Use the Short Videos on FluentU

FluentU has a large selection of authentic German videos, including an entire business category. Videos in this category cover many topics and industries, including real estate, technology, banking, design and more. You can organize these clips by difficulty to make it easier to find something that suits your needs whether you’re a beginner or nearly fluent. 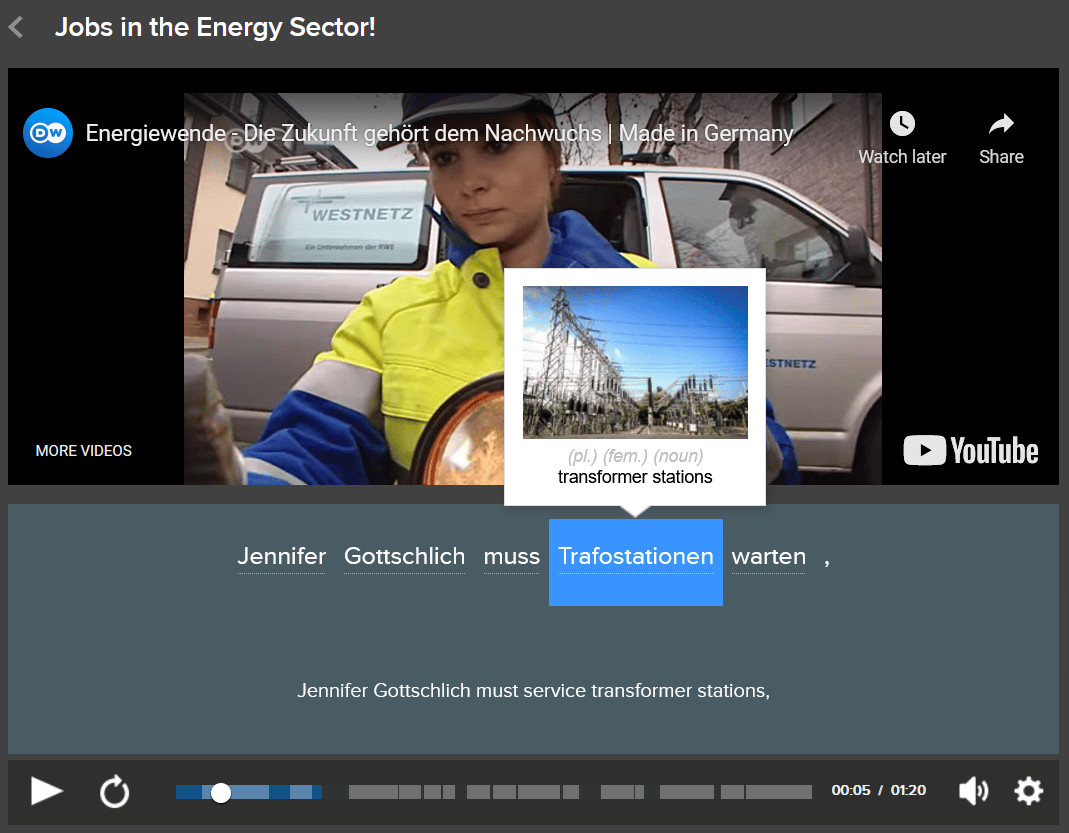 The FluentU program turns each of these clips into a learning experience. You only have to hover your mouse over a word in the subtitles to see what it means, an associated image and grammar information. Clicking on the word also shows you example sentences with audio pronunciations and other videos where the word shows up in the same context.

You can add words to flashcard decks directly from the video. When you’re ready to review, FluentU presents you with multimedia quizzes that adapt to your learning. Videos also have review quizzes as well as key word banks, interactive transcripts and more. 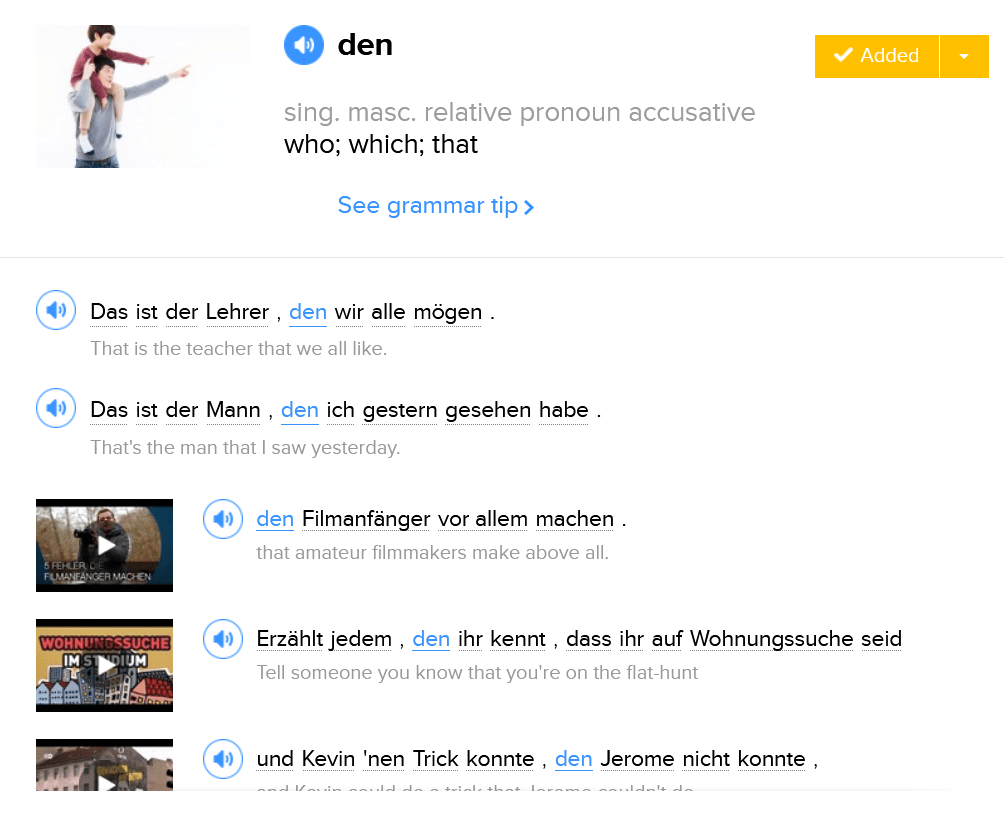 FluentU is available to use in a browser, or via the iOS or Android app.

Once you start with these hacks then you’ll quickly pick up on all the vocab that’ll make you a whiz in Business German.

With your newfound business confidence, you’ll be ready to consider spending a semester abroad over there or looking for a German work placement.

Then you can flash your skills in a thoroughly professional environment!

After studying German and Philosophy at The University of Nottingham, Laura relocated to Berlin in 2012. She now works as a freelance writer and is also assistant editor at Slow Travel Berlin.