Even think about how often you use gestures when you speak?

You probably don’t even realize how often you give the thumbs-up sign, shrug your shoulders or wave your hands around. (Pay attention the next time you’re counting, and you might be surprised!)

Ever shown someone that you think everything is okay by making a circle out of your thumb and index finger?

Maybe you have noticed just how much you like to talk with your hands and you’re wondering if we’re going to tell you to stop.

Don’t worry, we’re not going to scold you. But we are going to ask you to be careful when you use common gestures in Germany. You won’t have a problem with some, but others might unintentionally offend the listener. (Yikes!)

Germans might not be known for emphatic hand gestures, but they do use them! Be sure to practice those on this list whenever you get a chance. You don’t want to unwittingly offend anyone!

Not only that, but you’ll find that incorporating as many of these German gestures as possible into your communication will really help your fluency. Some scientific studies of nonverbal communication show that we use body language and gestures to help us stick to a natural rhythm of speech.

Also, many body language experts believe that gesturing while we talk can help our brain find words and phrases, something that second language learners struggle with! After all, we’ve all been in a conversation where we can’t remember the correct vocabulary to get our opinion across.

Here are some of the most important German gestures that you need to know about and a couple of familiar gestures to make sure you avoid while in the land of bratwurst, Prinzregententorte (a Bavarian torte with chocolate and buttercream) and some of the best beer in the world!

1. Pressing Your Thumbs for Luck

In the U.S., it’s super easy to show that you’re hoping for luck—all you need to do is cross your fingers. But if you try to do this in Germany, people might struggle to understand you (and look at you a little funny). That’s because they have a completely different hand gesture that they use to wish others luck.

Rather than cross their fingers, the Germans press their thumbs. So rather than telling someone that you’re crossing your fingers for them, you would say “Ich drücke dir die Daumen.” (“I’ll press my thumbs for you.”) This is often accompanied by pressing the thumb into the palm of the hand and wrapping all the other fingers around it.

It should look like you’re giving a “thumbs up,” but your thumb is actually in the fist that you make.

Check it out here:

When you’re chatting with someone, you might want to (jokingly) make it known that you think what they’re saying is completely stupid. More often than not, you’ll only do this among friends!

In Germany, do this by pressing your index finger into your forehead. Most Germans will then tap their forehead in this way to show just how stupid they think the speaker is!

If you want to see this in action, take a look at the video below. If you start to adopt this gesture when you’re speaking German, you’ll certainly look like you belong!

3. Waving Your Hand in Front of Your Face

If you want another gesture to express that you think what the speaker is saying is a little silly, you can always wave your hand in front of your face. Waving your hand like this is a way of saying, “You’ve got to be kidding me!” or, as explained in the video below, “You are totally insane.”

We don’t really have an equivalent gesture to this one, so you might find it quite funny whenever you see any Germans do this. Of course, it won’t be so funny if it’s ever aimed at you!

4. Hands in Your Pockets 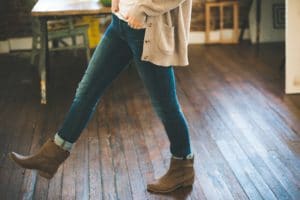 In the U.S., there are many gestures that are considered rude. Things like sticking your middle finger up at someone can cause serious offense, for example. But did you realize that some of the body language you utilize without thinking can be seriously offensive to others from another country?

So while you’re practicing those speaking skills in Germany, be sure to have your hands out of your pockets—or the person you’re talking to might get the completely wrong impression!

5. Pulling the Lower Eyelid Down 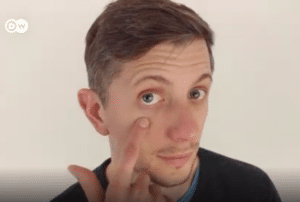 Again, this is another German gesture that doesn’t have an equivalent in the States. When we’re being sarcastic in English, it’s quite easy to get that from the tone of our voice. However, that isn’t so simple in German and, sometimes, sarcasm can be lost in the language.

That’s why Germans use a gesture to emphasize their sarcasm—they just pull down one of their lower eyelids using their finger. You can see an example of this being done right here.

If you’re generally happy with something or want to let someone know that you agree with them, in the U.S., we simply give a “thumbs up.” This is done by making a fist and pointing the thumb upward. But when you make this sign in Germany, people will just think that you’re counting.

If you’ve seen the movie “Inglourious Basterds,” you’ll probably already be aware of this.

In one particular scene, a spy who’s posing as a German soldier in a bar gives himself away by holding up his three middle fingers when asking for three glasses. A German would have shown the number three by holding up their index and middle fingers alongside their thumb. (This is also an example of how important it is to understand the nuances of gestures and body language!)

Another positive sign that we use when we’re speaking English is the “okay” sign. It’s so easy to make this sign, you just need to touch the index finger to the thumb to create an “O” shape with them.

This sign is known to mean “okay” in many countries around the world. Except in Germany and other German-speaking countries, that is! See the video below for an example.

In these countries, the gesture can actually mean something quite rude! So next time you want to let someone know that you think they’re doing a great job, you might want to tell them verbally!

Now that you know what to do and what not to do, enjoy your trip to Germany!

And next time you’re at a loss for words while speaking to a German speaker, don’t be afraid to use your hands. One of these German gestures might say exactly what you mean.

Laura Harker is a freelance writer based in North Yorkshire, U.K.