Hast du Hunger? Are you hungry?

If you are, be warned: this introduction to German food might make you even hungrier.

This article may not help you feel better immediately, but it will help you envision an authentic culinary excursion in Berlin, Munich or Darmstadt (Intestine City). Perhaps daydreaming of food will entice you to travel to Germany and explore a little bit on your own.

If you aren’t planning a trip anytime soon, German Deli can cure the occasional hankering für Deutsches Essen (for German Food). You can find some of the below mentioned dishes there, or make them yourself. Immigration and global travel have influenced German eating habits and recipes. New generations of adventurous cooks are here to stay and shock us in delight, but yet – there are some dishes that shall not be messed with! Leave them as greasy, salty, or sugary as they were intended  to be and decide for yourself.

These nine dishes represent different parts of Germany and its culture—even its history. And, of course, they are a special vocabulary unto themselves. 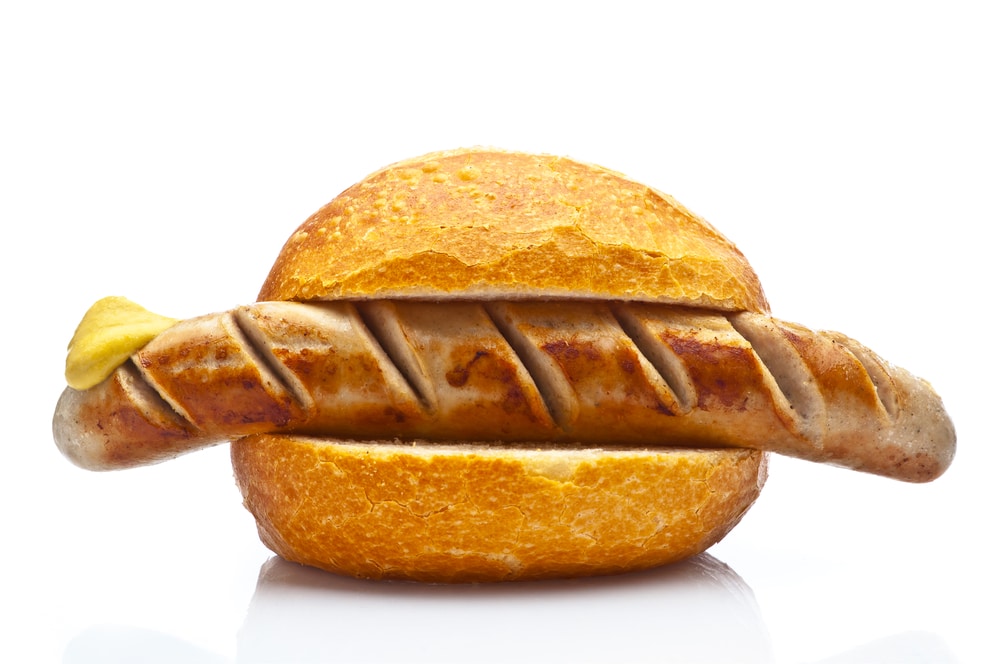 Since a number of American cities hosts mini-Oktoberfests in the fall, many of us are familiar with this classic. No matter where you go in Germany you are sure to encounter Bratwurst, a sausage usually made of beef, pork, or veal. The earliest documented evidence of Bratwurst, which today has some 40 regional varieties, dates back to the 14th century in Nuremberg, a city still known for its production of sausages. The way it is prepared is region-specific,  usually grilled or fried and often served as a snack with a Brötchen (bread roll). Many Germans also enjoy eating Bratwurst with hot mustard. If you’re from Wisconsin, a U.S. state where the largest ethnic group is German, you may be familiar with Bratwurst as it was brought and popularized there by German immigrants in the 1920s. 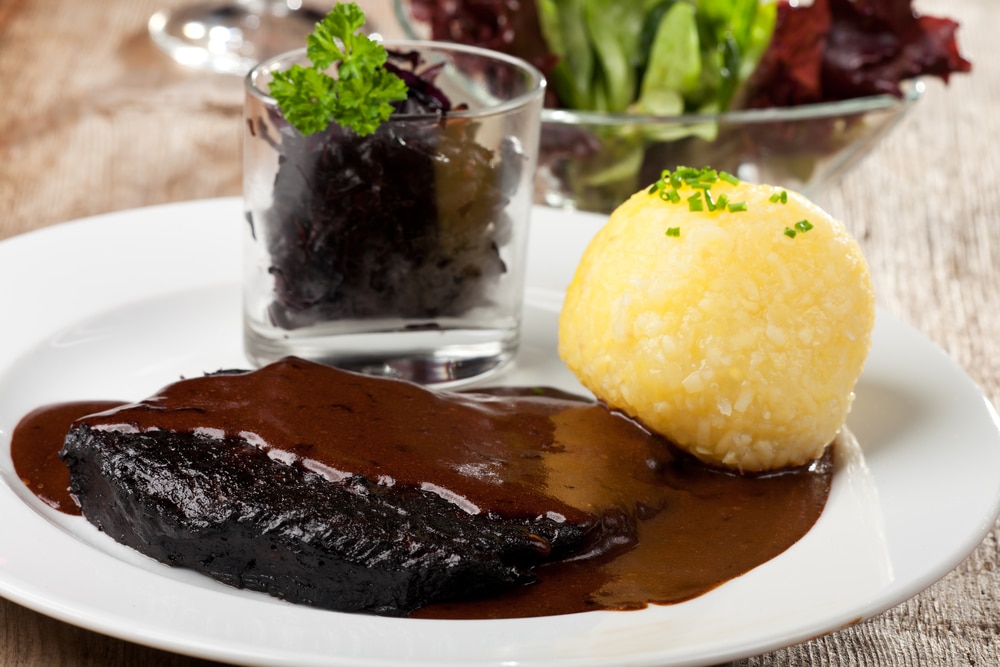 One of Germany’s best known dishes abroad, Sauerbraten is a pot roast that can be made with different meats (e.g. beef, lamb, pork, horse, or venison) and is often served during the colder months of the year. Before cooking this dish, the meat is marinated for days. While the ingredients of the marinade vary from region to region, it may consist of herbs, spices, vinegar, and red or white wine. For example, regions of Germany that are closer to France tend to use red wine as the base. If you’re looking for a unique yet traditional dish for your holiday dinner, try your hand at Sauerbraten! 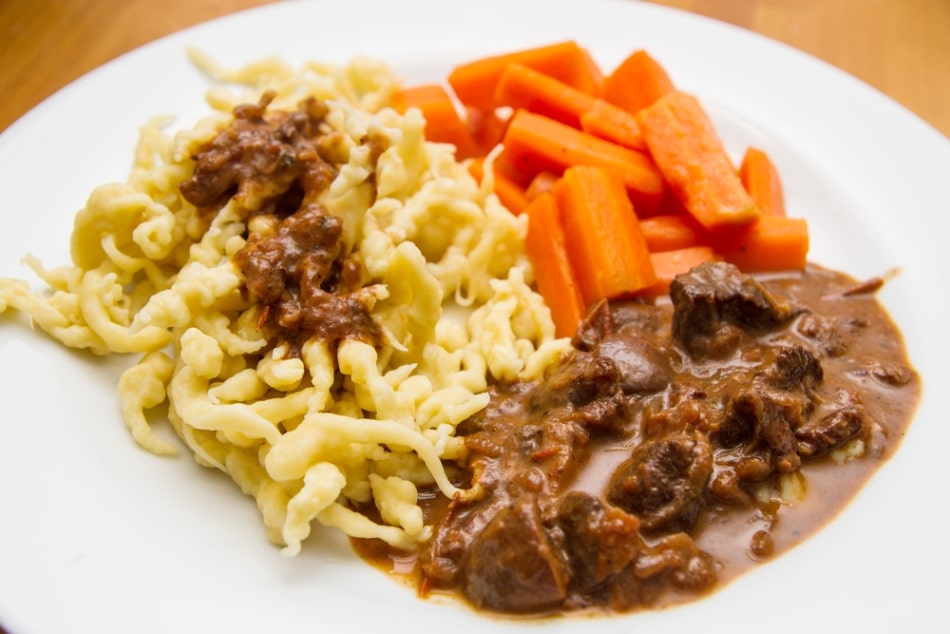 German cuisine is generally heavy on the meat. However, Spätzle, common in the south of Germany, is one of the few exceptions. Spätzle is a kind of noodle or dumpling whose main ingredients are eggs, flour, and salt. It can be served alone as a main dish, as in Käsespätzle, which is served with grated Emmenthaler cheese and fried onions. But most commonly, Spätzle accompanies a meat dish that usually has a rich gravy or sauce (like the aforementioned Sauerbraten). 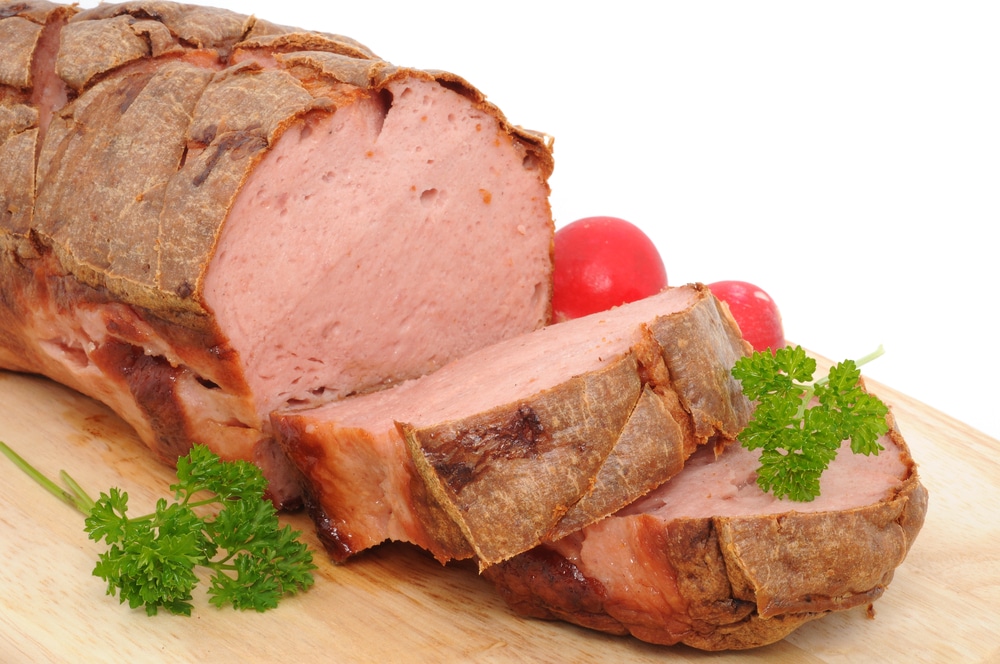 Literally “liver cheese,” Leberkäse is a pink meatloaf usually made of corned beef, but can also include pork and onions. Popular in the south of Germany, it is made by grinding the meat and then baking it as a loaf until it has a brown crust. Leberkäse is usually served hot on a bread roll and can be eaten with mustard. According to Germany’s food laws, a product advertised as Leberkäse must have a minimum liver content of 4% (unless it is Bavarian Leberkäse which does not have any liver). If you’re ever in the south of Germany, make sure to give it a try! You may like it more than your mom’s meatloaf! 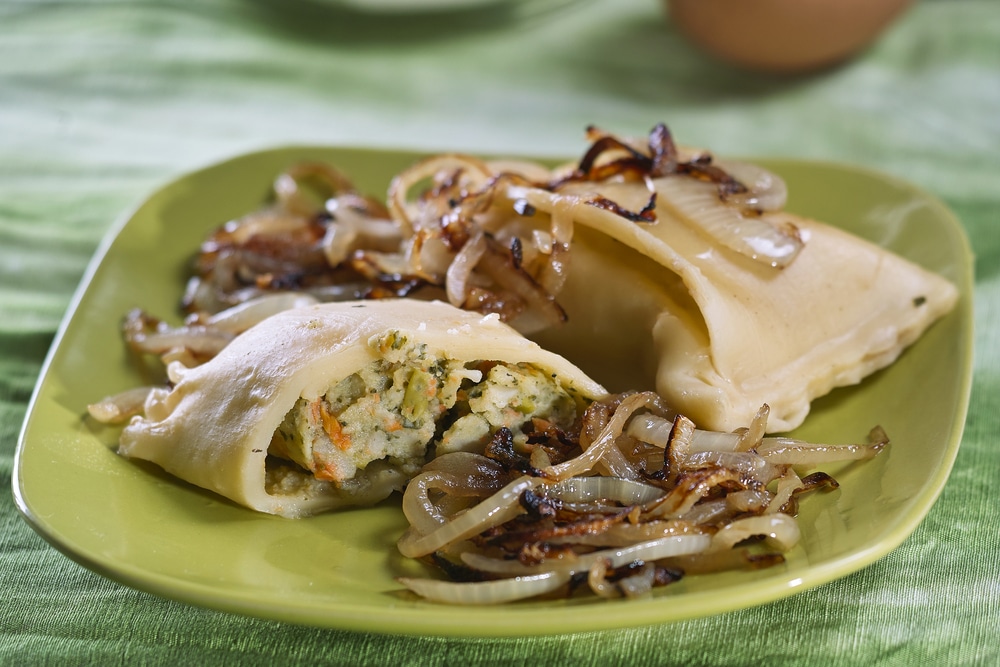 Maultaschen (mouth pockets / bags) originated in the German region of Swabia in the federal state of Baden-Württemberg and it is essentially a pasta dough dumpling that is traditionally filled with meat, eggs, onions, spinach, parsley, and spices. Similar to the Italian ravioli, Maultaschen are usually square or rectangular in shape. They can also be served in a soup! In 2009, the EU began protecting this Swabian specialty under the label of Schwäbische Maultaschen. The new law says that Maultaschen can only be made in Baden-Württemberg or in the historically Swabian district of Bavaria and that they must be made following specific guidelines. As you can see, food is a big part of one’s regional identity! 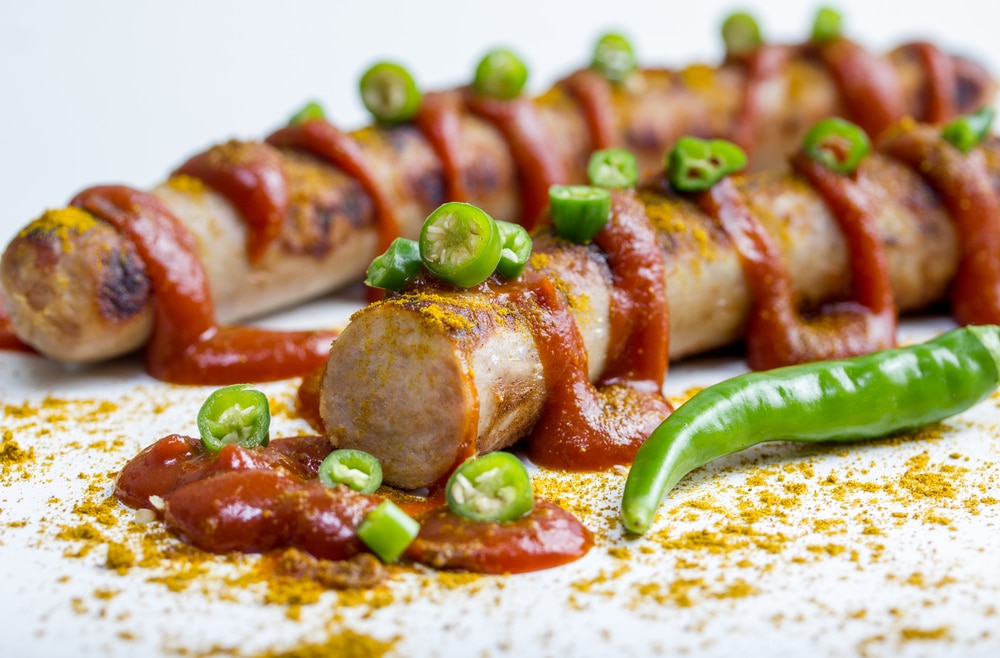 This fast food dish can be found everywhere in Germany, but it is especially popular in its hometown of Berlin. In 1949, Herta Heuwer acquired curry powder and ketchup from British soldiers stationed in war-torn Berlin. She decided to serve a steamed and then fried pork sausage with a mixture of these two ingredients and voilà, Currywurst was born. She began to sell it cheaply at a stand and it became popular with construction workers who were rebuilding the city. More than six decades later, Currywurst is still widely popular and often served with either a Brötchen or Pommes (french fries). 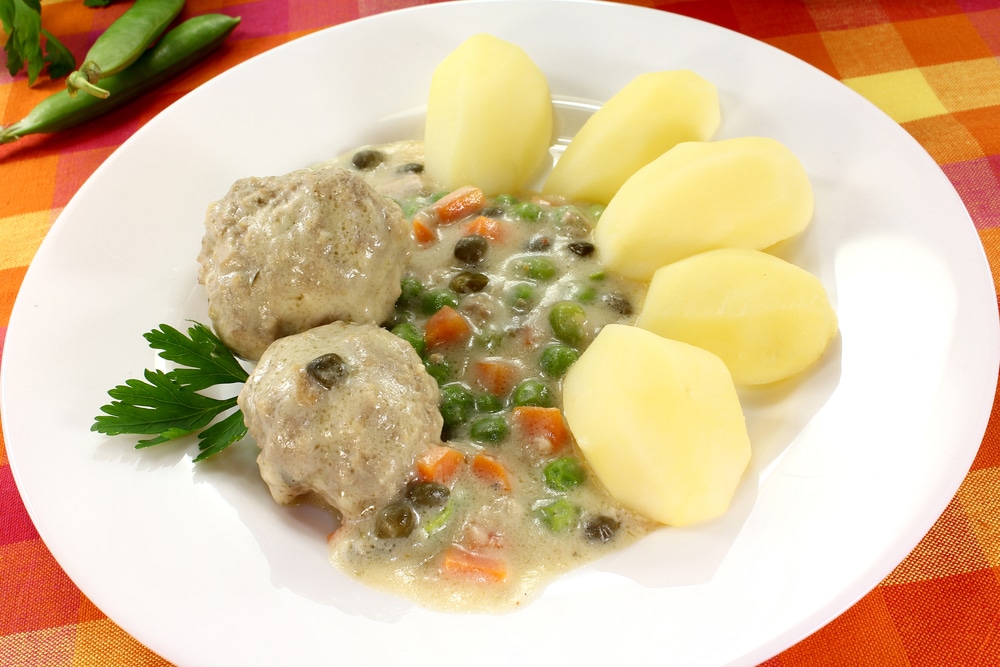 Named after the Prussian city of Königsberg (which is now known as Kaliningrad, Russia) where it was invented around 200 years ago, this dish consists of veal meatballs in a creamy white sauce made with capers and lemon juice. It is traditionally served with boiled potatoes. The meatballs usually also contain onions, eggs, pepper, and other spices, and the traditional recipe also calls for anchovy. In the States, it is referenced as Swedish Meatballs – and be pleasantly surprised, they don’t taste anything like the dish at Ikea. 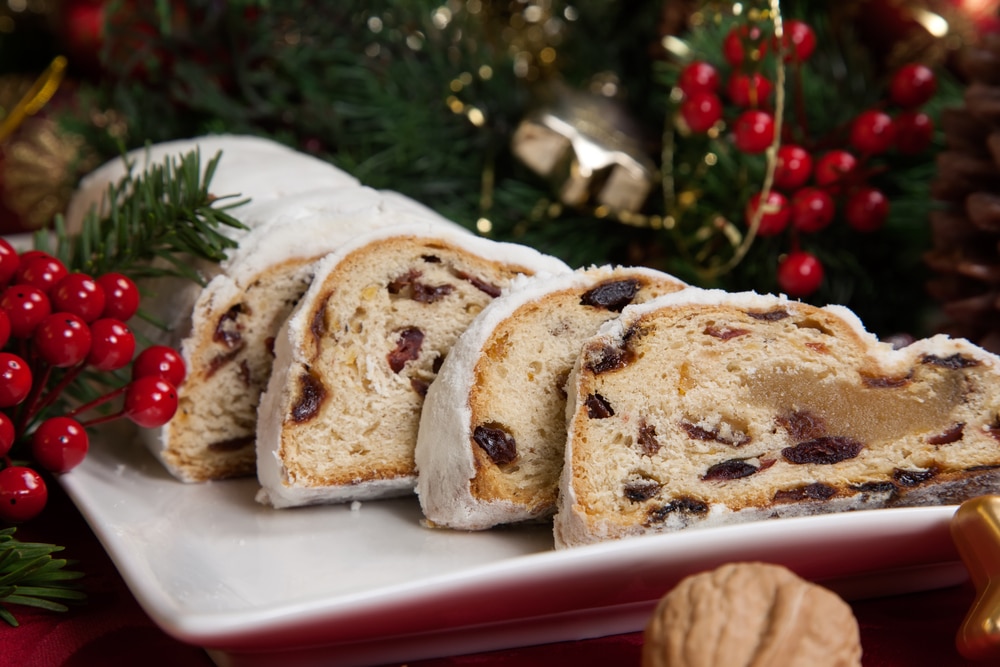 For those sugar cravings, Stollen might just be what you’re looking for. Usually eaten around Christmas time, Stollen is a bread made of dried or candied fruit, marzipan, nuts like almonds, and spices like cinnamon and cardamom. It is usually topped with powdered sugar! The most famous Stollen originates in the city of Dresden, where the annual Stollenfest is held. The festival takes place on the second Saturday in December, or the 2. Advent weekend. The city’s Stollen measures 3 to 4 tons! If you find yourself in Saxony around Christmastime some day, don’t miss out on this celebration – and eat your piece of the cake! 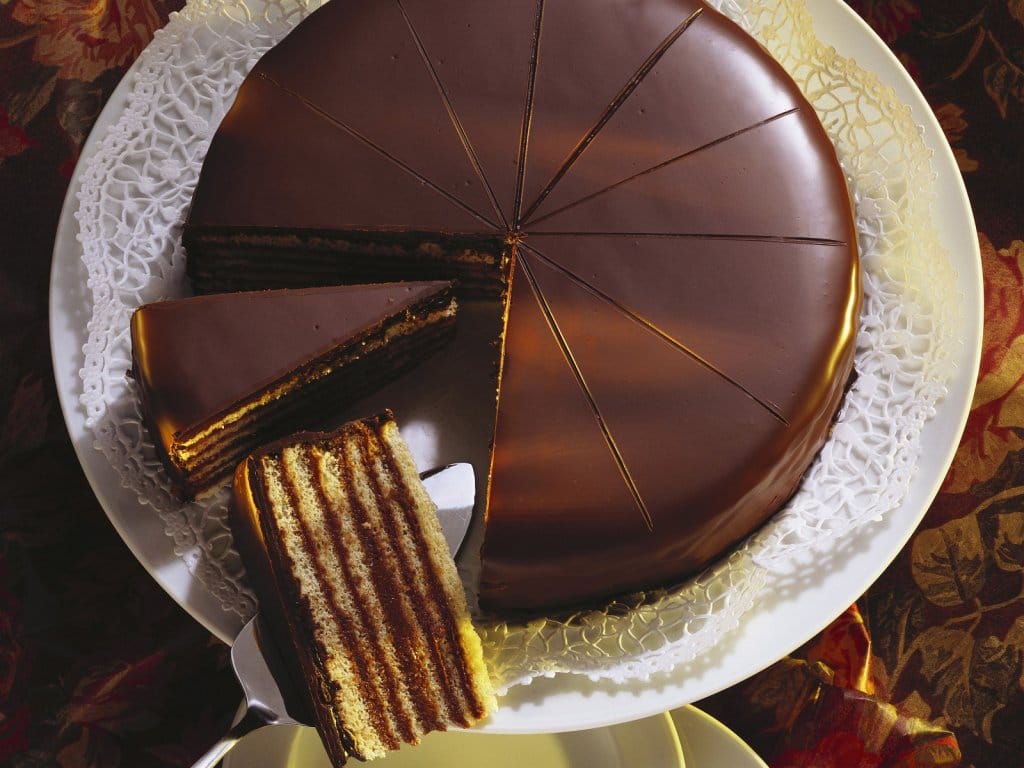 For those of you who would like something even sweeter than Stollen, the Prinzregententorte will not disappoint. This popular Bavarian pastry is to Munich what the famous Sachertorte is to Vienna. A Prinzregententorte is a rich, multilayered cake interlaid with chocolate buttercream and—if that wasn’t enough—it is covered in a devilish chocolate glaze. It may also be filled with various types of creams and jams! It is believed to be named after the Prince Regent Luitpold of Bavaria in the late 19th century.

These few dishes here, are a tiny glimpse into what a German, or someone in Germany, or some one who likes German food might cook up in their kitchen right now.

Let’s make some together – the recipes is very simple: grate raw potatoes and a small onion while draining some of the juices. Add an egg, some flour, and season with salt and pepper. Mix it all up and put some of the batter into a hot, oiled-up pan. Cook until golden brown and crunchy. Eat! Guten Appetit!