Swiss German is sometimes referred to as a completely different language from German, since the dialect is so different from Hochdeutsch (standard German taught in schools).

Learning Swiss German will not only add a dialect to your list, but it also opens up a new country you’ll be able to travel to.

Here’s our handy guide to getting started with Swiss German!

How to Learn Swiss German

You’ll already be catching up on your favorite German TV shows, movies and pop stars to help brush up your listening skills, so why not start dipping into Swiss culture too?

Even though most Swiss TV shows will be in Hochdeutsch, the characters and presenters will usually have a distinctive Swiss accent, so they’re a good way to gradually acclimatize to Swiss sounds. If you’re looking for inspiration, check out “10vor10,” a current affairs show. When you’re ready for TV in the Swiss dialect, tune into TeleZüri, an online channel dedicated to Swiss German.

But if you don’t want to watch an entire show or movie, shorter videos or clips are another good choice. Make sure to turn on the captions and look up new words to make the most of these short study sessions.

One resource you can use for this is the language learning program FluentU. Here, you can find authentic German videos like TV show clips, music videos, news segments as well as other native German media. These include examples of real Swiss German in use, including music from the Swiss band Grauzone, cultural facts about holidays in Switzerland, news clips from Swiss news channel Blick, and more. 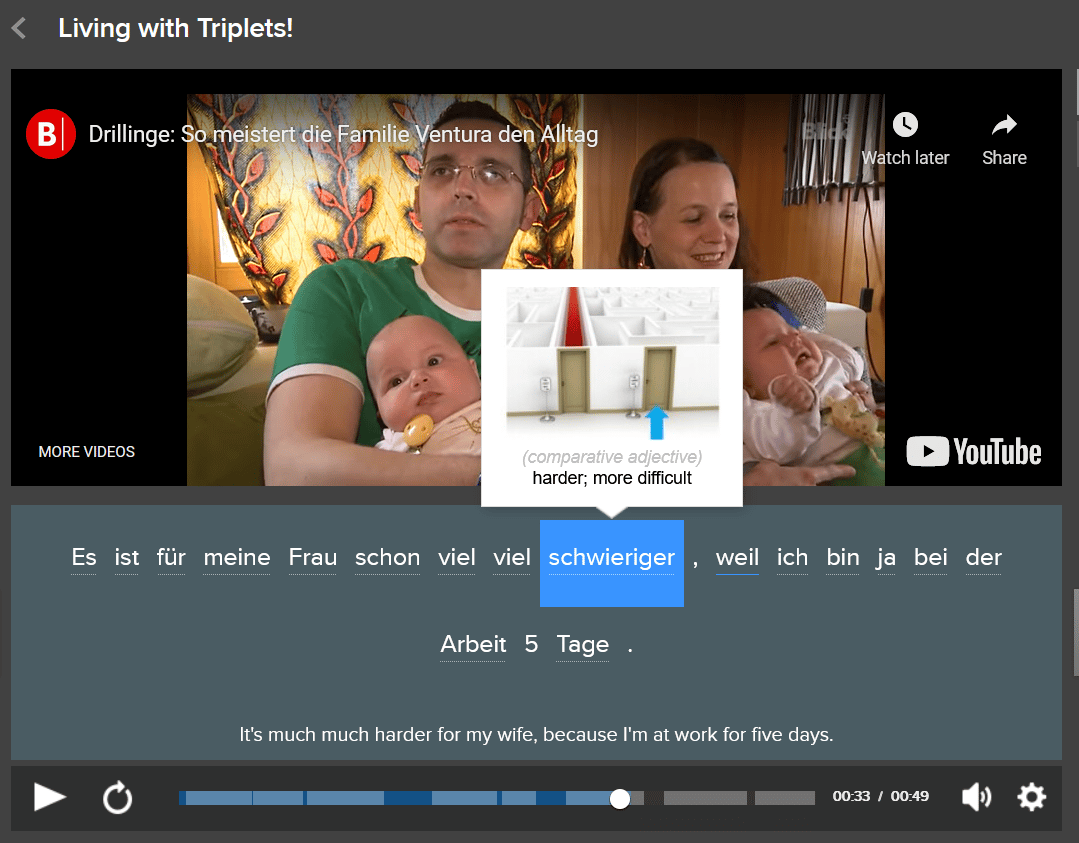 All videos on FluentU have interactive subtitles that show contextual definitions on demand. There are also adaptive quizzes and multimedia flashcards show the word in more context by integrating clips from videos where its used. If you find a word that’s used in a unique way in Swiss German, you can save it as a flashcard and compare it to its other definitions.

Another way to immerse yourself in Swiss German is to do word searches and crosswords. These will help you improve your vocabulary and will also help you learn how to spell words! You can buy a book of puzzles from Amazon, or if you’re ever in Switzerland you could pick one up on your travels. You can also have a look online and print off word searches and crosswords. Here’s a really good site for all your Swiss German puzzle needs!

And last, but by no means least… get cooking! Switzerland has many traditional dishes, which are often cheese-based. Have a look online for recipes and take them into the kitchen. By reading a recipe in Swiss German, you’ll be honing those reading skills while picking up new vocab in the process! Not sure what to cook or bake? One obvious option is Fondue. This very popular dish is a large pot of melted cheese, into which you dip chunks of bread and potato. If you’re more into your baking, try baking Meitschibei biscuits, a delicacy from the city of Bern.

The Swiss love “ch.” So much so, it appears in most words. Even if it isn’t usually in the Hochdeutsch version, they’ll probably find a way to squeeze in a “ch” somewhere. It’s pronounced exactly in the way a German would say the “ch” in acht (eight), so as you can imagine, it’s quite a tricky sound for us English speakers to master.

Try it out in these two words. These are super hard though, even by Swiss standards, just because of how often the sound appears in them. Once you’ve mastered these, though, you’d make any Swiss native proud!

It’s important to note that a “k” at the start of any word is turned into the “ch” sound. You can see this in the two above examples—Käs becomes Chäs and the “kitchen” stem of the first word changes from Kuche to Chuchi.

In standard German, infinitives end in an “n,” however this is not the case in Swiss German.

machen becomes mache (to do)

This also means that some words which are composed from two separate words lose the “n” from the middle.

In Hochdeutsch there are two diminutives: chen and lein. When you add these suffixes to nouns, the final word describes a smaller version of the original noun. So Tischlein means “small table” and is the diminutive of Tisch (table).

However, in Swiss German, you create the diminutive by adding “li” onto the end of the original noun.

Remember that whenever an “s” appears before a consonant, it usually changes to a “sch” sound. This is always the case, and you don’t have to remember any rules about when it doesn’t happen—phew!

Remember the “k” switches to a “ch” sound as explained in the first point.

A diphthong is when two vowels come together to create a new vowel sound. An example in English is the “i” and “e” together in “lied.” Many Hochdeutsch diphthongs become single vowel sounds in Swiss German.

heißen turns into heisse (to be called)

As mentioned previously, Swiss German has many different words from standard German. To get you off to a good start, here’s a list of handy vocab:

So there we have it! Your beginner’s guide to learning the ins and outs of Swiss German! Of course, since the Swiss can speak perfect Hochdeutsch, they’ll be more than happy to switch to something easier for you if you’re having trouble communicating in the dialect.

But that doesn’t mean you shouldn’t try and learn the dialect—being able to speak and understand Swiss German will help your own Hochdeutsch to improve, and it’s one more step towards becoming much more immersed in German and Swiss-German culture.

If you can’t wait to be mistaken for a local, learning Swiss German is definitely something that you need to add to your German to-do list!