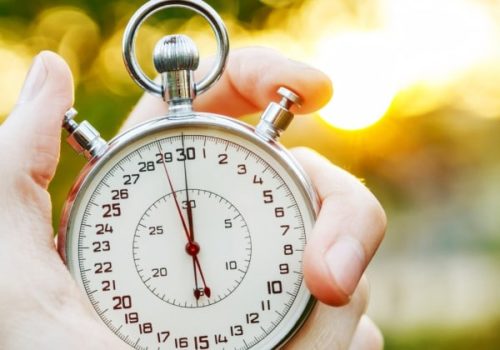 How to Learn French Faster: A 4-Step Method to Accelerate Your Progress

When it comes to your French progress, do you have the need for speed?

You’re taking a trip to Paris. You need to speak French for your job. You’ve met a special someone who happens to be a native French speaker.

Now you need to learn. Fast.

You’ve been studying diligently, but it’s just not enough.

While there’s no magic formula that guarantees fluency, there are methods that’ll get you there faster.

How to Learn French Fast: A 4-Step Method to Accelerate Your Progress

There are plenty of well-known (and well-loved) language learning methods already out there.

For instance, you may have heard of “sentence mining“, which gets you using a language as it’s spoken rather than just memorizing parts of it.

Another method is “scriptorium,” developed by Alexander Arguelles, which involves writing sentences while speaking them out loud. The method I’m going to share with you now uses elements of both of those and adds video to the mix.

You’ll be watching television shows and movies and writing down sentences. Then you’ll be living with those sentences — reading them, speaking them, breathing them. If you dive in headfirst, it’s amazingly effective and a lot of fun.

Why Video? Video provides you with more context than audio alone. You’ll be working out what people are saying, so visual clues help. Also, involving your senses more fully will keep you alert and engaged. More than anything, video makes things more entertaining. With video, you’ll be able to learn while feeling cheerful and relaxed.

How to Select the Best Video Sources

Get set up with your video source in a comfortable space. Try creating a designated French space in your home, where you’ll always be in the mindset to immerse yourself in French language learning. You’ll be doing a lot of pausing, so arrange for this with whatever devices you’re using. Pour yourself a beverage, get relaxed and take breaks as frequently as needed. It’ll be fun, but it’ll also be a lot of work.

Every day, start a new “entry” in a notebook by marking the date. Play your video. Try to understand and hold as much of each sentence in your memory as you can. When the sentence ends, pause. Begin writing out the sentence and speak each word out loud as you’re writing it. You might have to replay a few times to get the entire sentence. You might have to do some quick research, or look through a dictionary for a mystery word when you only have a vague idea of how it’s spelled beyond the first few letters. You might need to turn to an internet message board to ask a question about the usage of a particular phrase and then observe the resulting debate between native speakers. This is a process. Enjoy it.

If you have access to English subtitles for your video sources and really need to use them, go ahead. This isn’t “cheating,” because it still requires you to figure out what’s being said in French. You can also use French subtitles to check yourself, but be aware that, for some sources, subtitles may differ from the audio.

Number each sentence so you’ll know when you’ve hit your target number of sentences. If a sentence is threatening to end your world, just write down as much as you can and move on. While context is important, the transcribing process should feel like a fun puzzle. The French word for puzzle is casse-tête, but this language puzzle shouldn’t actually break your head.

If you’re getting frustrated regularly, reconsider your source material. It could be too challenging or not lively enough to hold your interest. If you would rather watch Amélie than a Rohmer film, now’s the time for honesty. If you would actually rather watch Rohmer but are in denial about being a film snob, now’s the time to own it. If the material doesn’t seem to be the problem, try cutting back on the number of sentences.

Remember that we’re striving for immersion during this process. If you’re going to curse in times of frustration, curse in French.

3. Review Each Set of Sentences Every Day for 10 Days

What do I mean by “review”?

I want you to keep these sentences alive in your brain, and reinforce them until you never forget them.

The most important thing is to involve yourself. You’ve deciphered these sentences and pulled them aside for your personal use. Now it’s up to you to make them your own.

Some days, you might read along with the audio. Other days, you might re-watch the video without subtitles. If you’re feeling musical, you might set your sentences to a melody and sing them to your cat. The only rule is to review out loud often, even if you don’t do it every day.

When you read, whether out loud or silently, think about what the sentences express. If your sentences are from a movie, imagine yourself as the characters. Try acting out both sides of a dialogue, complete with gestures and facial expressions. You might not want to do this in the break room at work, but you get the idea.

Once you’ve reviewed a set 10 times, you can “retire” it. If you go by my recommendations, you’ll regularly have 200-300 sentences to review. That’s a lot. This is why it’s important to not spend too much time transcribing. It’s also a good idea to break up reviewing throughout the day, to prevent the bad kind of insanity (the good kind being learning French this fast).

Once you’re done with a video source (or part of one) give yourself a rest and then try re-watching it a month or so later. See if you can speak along with the audio, or if you can simply watch and understand what’s being said. This last part of the method is not only important for tracking your progress, but continuing it. Keeping familiarity with source material after you’ve already learned it will help build and maintain a base for fluency.

You’ll find your efforts at memorizing grammar and vocab are more effective when they’re being applied directly to your source material.

Whether you need to increase your learning speed due to a life event or frustration with your current progress, rest assured that you can. If you hear someone speaking French on the television and think “I wish I could talk like that,” stop right there.

Isn’t now as good a time as any to start?