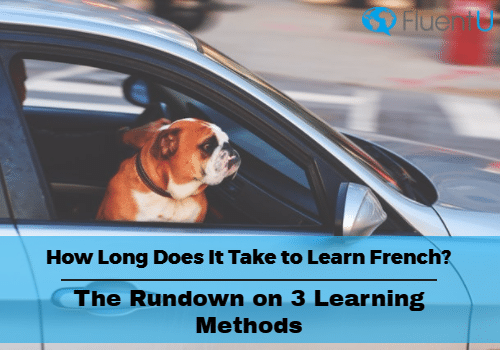 Want to Learn French Fast? 3 Ways to Study and How Long They Take

Learning a new language can sometimes feel like taking a long car trip.

While we encourage you to think of French learning as an experience that’s as much about the journey as the destination, we also know how satisfying it would be to find that speedy shortcut to fluency.

And setting goals for when you’ll be speaking couramment (fluently) certainly isn’t a bad idea. Of course, how long it’ll take you to speak French fluently depends a lot on how you’re learning and how much exposure you’re getting to the language every day.

In this post, we’ll show you three different routes to fluency, with estimates for how long they take.

But first, we’ve got some tips that can get you driving on the fast track.

How to Get a Head Start in Your French Learning Journey

Not everyone starts learning French in the same bateau (boat). There are some things that might make it easier for you to become fluent in French before you even begin.

If you already speak a Romance language (or even just have the basics of one), your French learning experience might be easier.

French is a member of the family of Romance languages, which also includes Spanish, Italian, Portuguese and Romanian. These languages share a lot of cognates, so if you speak another Romance language, French vocabulary words will probably be easier for you to remember.

But knowledge of Romance languages won’t just help you with vocabulary. It can also help you when it comes to conjugation. In English, we rarely change verb forms when we conjugate them. For example, the verb “to jump” is conjugated as follows in the present tense:

Because the verb changes so little in this conjugation, it can be difficult for native English speakers to intuit that they’re conjugating at all. However, if you already speak another conjugation-heavy Romance language, conjugating will be much easier to wrap your head around in French.

Knowing languages that have two past tenses, like Spanish, may also help you get a better handle on the difference between the French imperfect and compound past tenses, for example.

But you don’t have to speak a Romance language to get extra help with your French. Accent-wise, you might actually be better positioned if you speak an unrelated language.

Chinese, for example, differentiates between the two “u” sounds—the raised “u” in the French tu (you, singular) and the lowered “u” in the French vous (you, plural). If your mouth—and your ear—are already accustomed to making these two sounds, you’ll have a much easier time of it in French.

The same is true of certain phoneme-rich Scandinavian languages. There are more distinct sounds used in Danish than, say, in English, and many of these sounds (including the aforementioned “u,” but other distinct vowel sounds too) are also used in French.

Another way to get a head start on your French language learning is to concentrate on spoken French rather than written French.

French isn’t written the way that it’s spoken: not just as far as spelling is concerned, but also with regard to the way that sentences are formed. For example, while nous technically means “we” in French, most French people will use the word on, which translates approximately to “one” when speaking.

If, however, you focus on spoken French and decide to learn written French later, you’ll be speaking more fluently far more quickly, and if your end goal is to be understood by native speakers, this is a great way to go.

This method does, of course, have its downsides. If you decide to focus all of your efforts on spoken French, you may accidentally incorporate some mistakes into your writing when you do put pen to paper.

For instance, a native French speaker will usually say Je sais pas (or even shorten it to “ché pa”) instead of saying the correct Je ne sais pas for “I don’t know.” You’ll need to relearn the correct way of saying these sentences later if you hope to be able to write French properly.

How Long Does It Take to Learn French? The Rundown on 3 Learning Methods

Bearing those tips in mind, you’re probably still wondering how long you’ll need to work on your French before becoming fluent. The answer, of course, lies in how intensively you’re willing to devote yourself to French language learning.

With full immersion in the French language, you can expect to be relatively fluent in three to six months. Of course, full French immersion can be tough to accomplish, considering the fact that you probably have a full-time life somewhere where French isn’t the language being spoken!

In order to fully immerse yourself in French, you’ll either need to travel to a French-speaking region or sign up for a domestic immersion program.

If you’re opting for the former, there are a few choices at your disposal. American citizens are allowed to visit France without a visa for three months at a time, provided they don’t attempt to work in the country. Once in France, students can sign up for a French language course for formal education and use the rest of their time to immerse themselves with new friends and neighbors.

You could even sign up for a language exchange like Franglish, which helps you meet native speakers of French for free in exchange for spending a bit of time chatting with people in English.

If you’d like to spend more time in France, you might consider pursuing a year-long degree program there. The Sorbonne offers year-long programs for people who want to be immersed in French language and culture. You’ll need a visa to be able to participate in one of these programs.

Domestic immersion programs exist as well. These programs are often more reasonably priced than a move across the pond (and of course they don’t require a visa). Some great programs include:

With a program like this, you’ll also benefit from being placed among people who have similar French fluency goals as you do.

Partial French Immersion: 6 to 12 Months (And Up)

If you can’t afford to uproot your whole life for your French fluency goals, but you’re still willing to devote a good amount of time to immersion, you might consider partial French immersion.

Partial French immersion is an intensive way to learn French at home. You’ll need to secure a teacher or language partner who’s willing to meet and speak for at least five to seven hours a week. These regular conversation sessions, supplemented by coursework from the French textbook of your choosing, will help your brain revert as much as possible to French and keep you from forgetting what you learned between sessions.

To get these conversation hours, you can either hire a teacher or find a language partner via a program like MyLanguageExchange. Finding a partner will be a less expensive option, but since the idea of these sorts of exchanges is that you trade your English expertise for your partner’s French expertise, you’ll need to spend twice as much time in this scenario.

The key to ensuring that you achieve fluency even faster with this method is relying on tools that immerse you even further in the language. To do this, make sure that your leisure activities are in French as much as possible: read French books, watch French television and get your news from a French source.

And get creative! If you’re a chess whiz, try learning how to play the game in French, with the French names for each piece and move. If you love watching professional sports, consider tapping into French rugby or soccer and watching the games commented in French. The key here is making sure you get as much language exposure as you can.

Occasional or Sporadic: That Depends on You!

If you don’t have the time (or the funds!) to devote to immersion in French, you can still learn the language – it just might take you a bit longer.

The CIA claims that it takes about 1,000 hours to learn a foreign language, so set up a system for keeping track of the hours you devote to your language practice—like a thermometer chart, for example—and let your imagination be your guide so that you can meet this goal!

Start with some of the resources listed above: get a great French textbook, attempt to combine French with your leisure activities and sign up for a French class if you can.

You can also watch French movies and listen to French music to get your ear used to hearing French.

FluentU is a particularly useful resource for immersive learning on your schedule. This innovative tool offers authentic French videos, like real news clips, movie trailers, music videos and more, and transforms them into language learning experiences.

Each video comes with interactive captions that you can click to instantly get an in-context definition for any word you don’t recognize. Then, FluentU’s “Learn Mode” creates flashcards and exercises that make sure you retain all the new vocabulary you’ve picked up.

There are also built-in progress tracking tools and videos for beginner through advanced learners, so you’ll keep moving forward in your language learning journey and reach that fluency finish line faster!

There are many other ways that you can bring French into your daily life. Consider creating labels for objects around your home so that you’re learning while you’re doing other things, like la vaisselle (the dishes) or la lessive (the laundry). You can even take the busywork out of this with Vocabulary Stickers—pre-made French labels for more than 130 objects around your house.

They’re even color coded so you’ll organically learn the grammatical gender of French words. Check out the variety of labels you can start sticking all over your home!

No matter what techniques you choose, how fluent you become in French and how quickly is always going to depend on you and how much work you’re willing to put in. Whether you have the time to devote several hours to French practice every day or just a few hours a week, make your practice regular to keep from losing what French you’ve already accumulated. As with anything, practice makes perfect!

And as always, FluentU videos are a great resource to improve your French. Queue one up whenever you have a few minutes to immerse yourself in the language and get one step closer to French fluency.

Learning French in Nice and the Côte d’Azur: Sounds Like a Really Nice Idea, Right?
The 8 Best French Cult Films That Put the “Cult” in French Culture