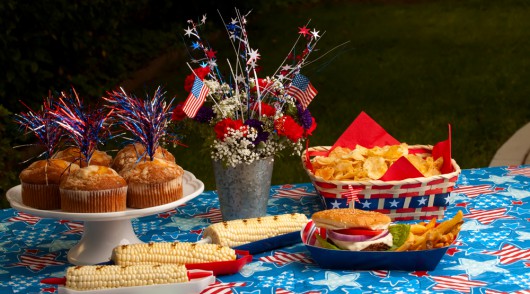 Celebrate a favorite American holiday: The Fourth of July.

That’s when Americans remember that the Declaration of Independence was signed in 1776.

You can have your own American celebration on the Fourth of July wherever you live.

Americans often have a big picnic on the Fourth of July. That means they invite a bunch of friends over for an outdoor dinner party. These gatherings are called potluck dinners.

The name actually makes sense. Each guest brings a dish or pot of something to share with the crowd. You never know for sure what type of food each guest will bring. That’s where the luck comes from in potluck.

At a potluck, you may ask yourself: What’s on my plate?

When learning about American food, sometimes you may be in for a surprise. Watch how these kids check out new food: 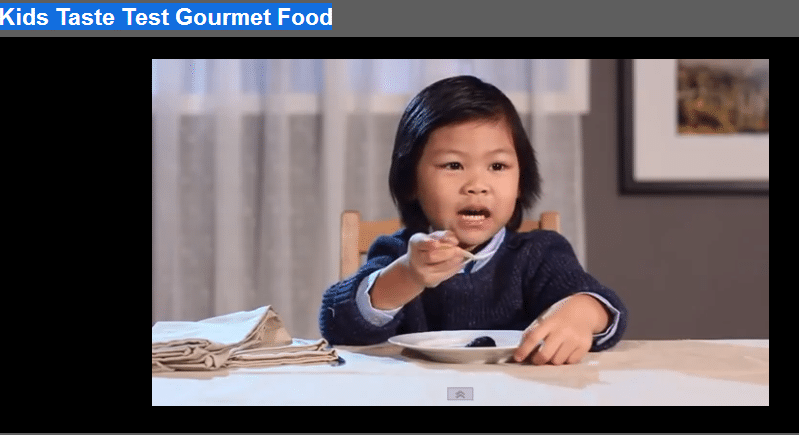 Invite your friends to bring their favorite American summer foods. Here are some ideas to get you started: 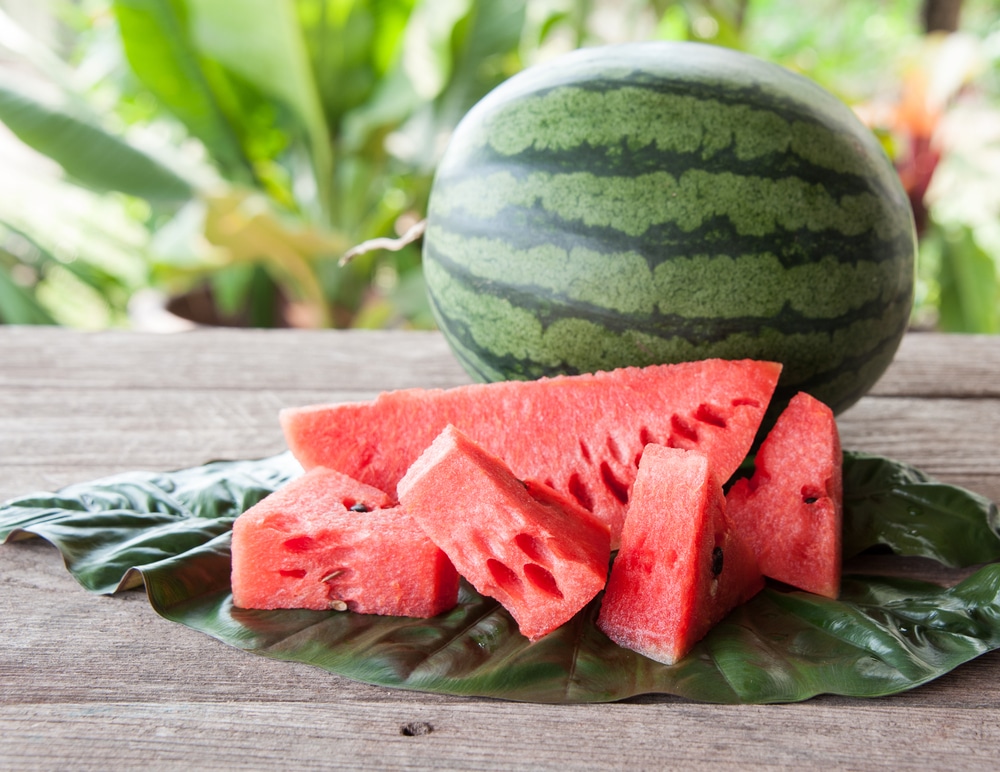 Watermelon is perfect and ripe in the United States around the Fourth of July. It has a beautiful red center.

This cook shows you how to cut it cleanly and neatly. Know that you don’t have to cut your watermelon as fast as he cuts his:

Don’t stop with simple squares though. Get fancy!

Here’s a fun watermelon game for your picnic! Put butter or something greasy all over a watermelon. That will make it very slippery. Place the greased watermelon in the grass and stand back.

All your guests circle around it. Whoever can carry the slippery watermelon over the finish line, wins.

The winner gets the watermelon, but that person may not want to eat it after all the sloshing around in butter. You will want to have another watermelon available for dinner. 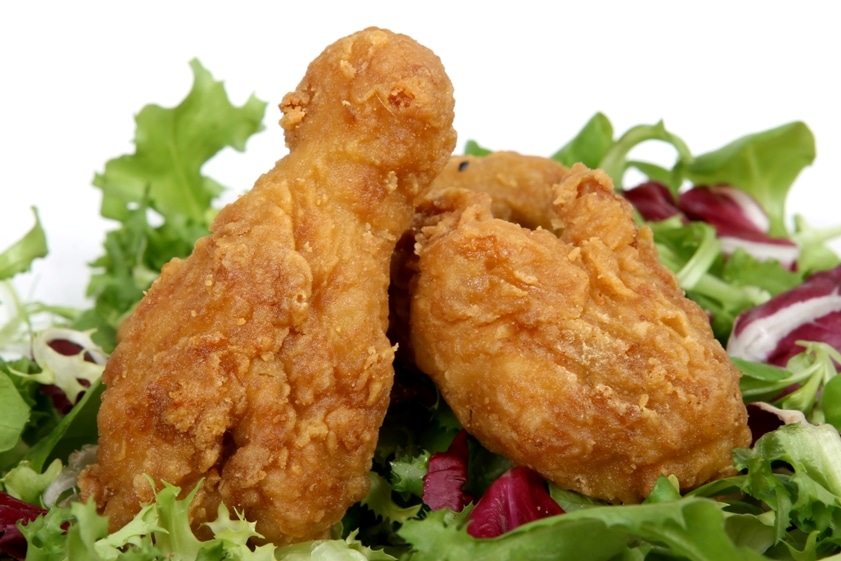 This is not an easy dish to make but it tastes SO good.

Often, Americans will just buy a bucket of fried chicken at their favorite restaurant to bring to the Fourth of July picnic.

You may want to do the same thing. If you are brave, you can fry your own chicken.

Chef John has a really good recipe that is easy to follow: 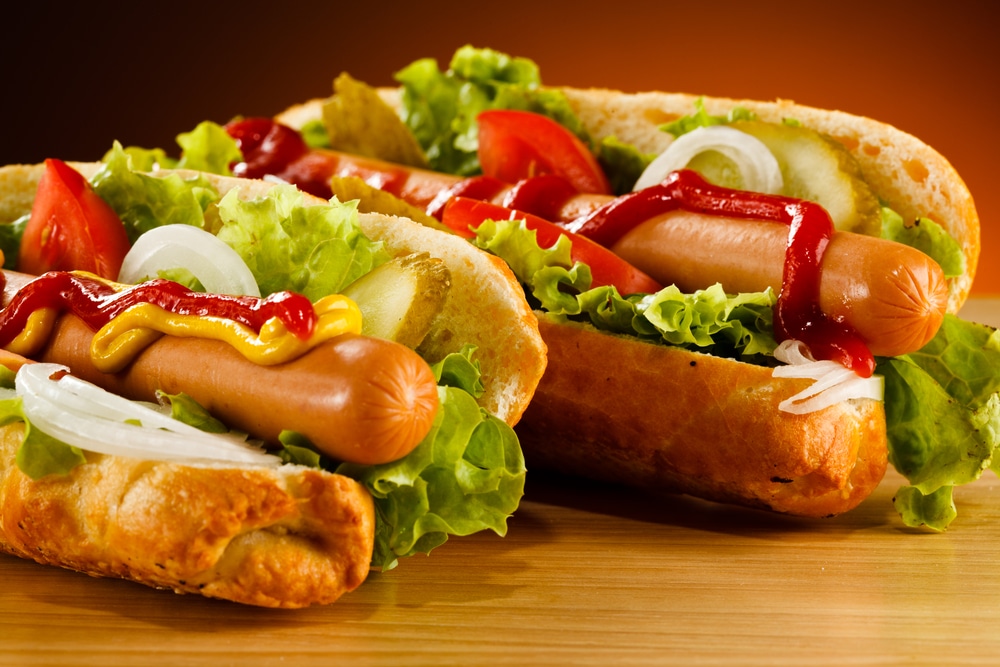 Hot dogs may have been created in Germany, but they have become an all-American favorite.

Having lots of toppings makes the hot dog perfect. You want to have at least ketchup, mustard and chopped onions.

In New England, they load on bacon, red beans and mustard.

In Chicago, they never put on ketchup. They use a poppy-seed bun filled with a beef frank (hot dog), relish, tomatoes and different kinds of peppers.

In the South, everything is deep fried, including the hot dogs. Their favorite hot dogs are called corn dogs. The hot dog is put on a stick and covered in cornbread batter before frying. Corn dogs are great with ketchup.

Every Fourth of July, Nathan’s hosts the International Hot Dog Eating Contest. They have been having this contest every year since 1916. If you have access to American television channels, you can watch the contest on ESPN. The hot dog eating record is 74 hot dogs in 10 minutes. 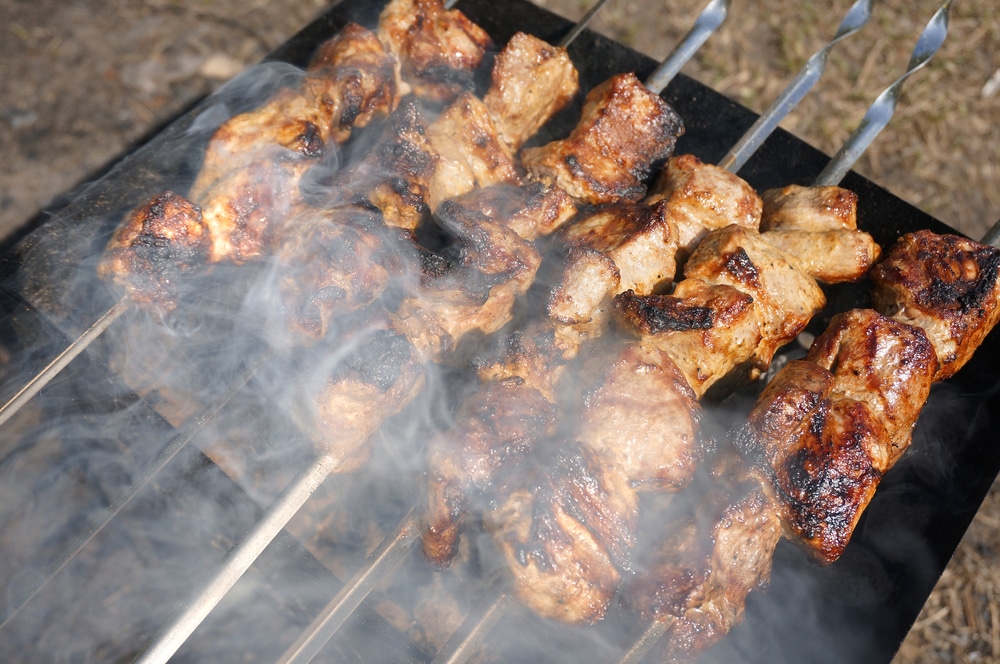 Barbecue can be just about any kind of meat: chicken, beef, shrimp or turkey. But the most common type of meat for barbecue is pork.

Barbecue dates back to the time of the American settlers. The one meat often available cheaply came from pork. Barbecue allowed the settlers to use all the parts of the pig.

The sauce can improve even a tough piece of meat. Like hot dogs, barbecue sauce varies from one part of the country to the next. You can make a spicy Texas Sauce, a sweet Kansas City Sauce or a vinegary North Carolina Sauce.

Sometimes North Carolina sauce is called “Slap Your Momma.” That’s because the sauce is so strong that you might do something crazy like slap your mother. (Americans do not slap their mothers, ever.) 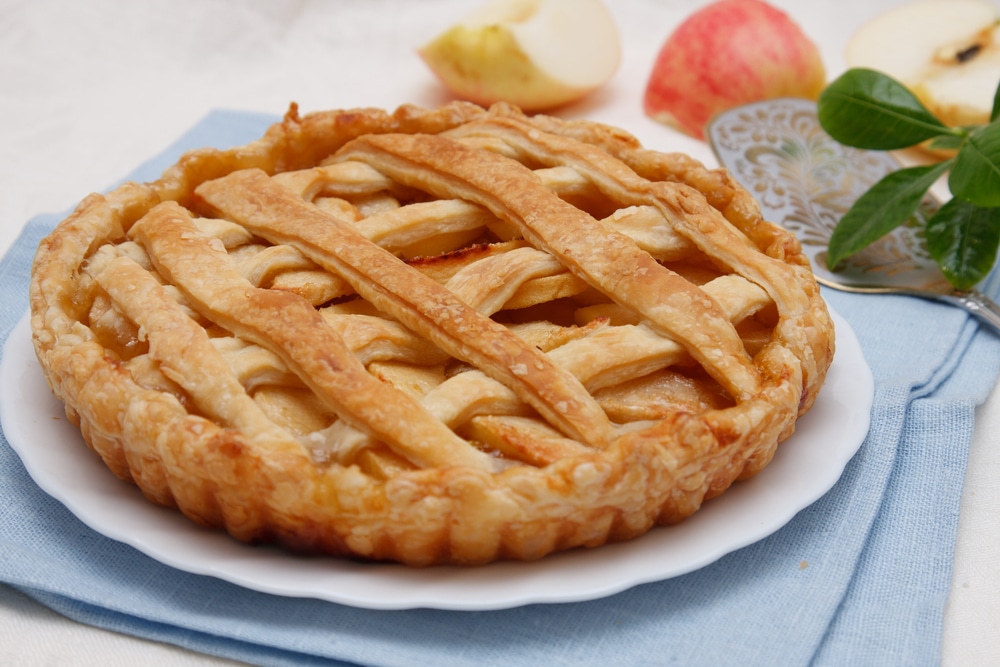 You have heard the English slang, “It’s as easy as pie.” There is a reason for that. Of all the Fourth of July dishes, apple pie is the easiest to make.

Apple pie ingredients are available in most places around the world.

Start with the crust. All you need is flour, salt, water, vinegar and an egg. That’s it. Here is a step-by-step recipe.

Next you need a bunch of apples. Don’t have apples? No problem. The only fruits that won’t work are citrus or lychee. Go for pears, peaches, berries or plums.

Peel the skin off the fruit if you can. Chop it into strips and put the fruit into the pie crust shell. Pour sugar over the top. Add pats (squares) of butter.

You can put another layer of crust of the top. Some cooks like to cut out apples or stars in the pie crust to show off their Fourth of July spirit.

Here is a good video to show you how to make the perfect apple pie: 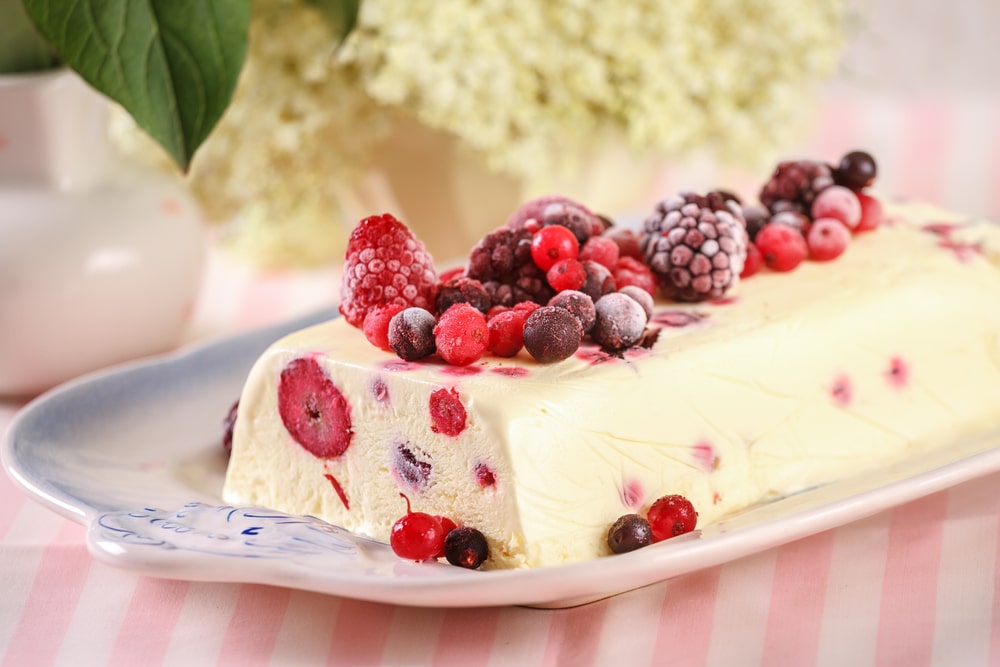 If your grocery store has ice cream available, you will definitely want to get some for your picnic.

Or, you could make your own ice cream.

Lots of great ice cream recipes are out there for vanilla, chocolate, peach and even Orange Crush soft drink flavored varieties.

You can make the ice cream using an ice cream maker.

Or, you make a Fourth of July party game.

You will need three zip lock freezer bags, lots of ice and rock salt. Check out the recipes above to see what ingredients you need to include in the ice cream mixture.

Using two bags will prevent salt and ice water getting into your ice cream.

Put ice in the third bag. Pour some rock salt over the top. Ice cream freezes at the temperature of melting ice. Now set your ice cream bags onto the ice and seal it up.

Shake the bags every 5 minutes to keep the ice cream moving. You will need to drain off the water in the third bag and add more ice as it melts. Remember to add just a bit more salt in each time.

Once the ice cream looks thick and smooth, carefully take it out of the bag. Taste it to make sure you didn’t get salt inside.

Serve over your pie for the perfect home Fourth of July treat.

Have a spectacular holiday! Enjoy those fireworks, eat well and celebrate everything American.