Want to hear some laughs from your ESL students?

Wish you could make cultural lessons more interesting and engaging?

Well, have you ever watched “The Simpsons” in class?

Aha, that explains it! Bringing America’s most popular cartoon family into the ESL classroom is just the solution you’ve been searching for.

Students always enjoy a day of watching TV shows and movies—they don’t usually see it as active learning, but you know that there are benefits to using the shows in class.

In an ESL class, TV shows and other short films can be used to improve listening skills, understand natural speech patterns and accents, and even teach culture.

But why do we need to teach culture in an ESL class in the first place?

Why Teach Culture in an ESL Class?

Culture’s Relation to the English Language

Culture can also give students perspective to understand the evolution of the English language as well as etymology of words, which may improve vocabulary recognition and enjoyment of learning.

Many students don’t realize that English has a lot of borrowed language, which makes pronunciation difficult at times. When they find words from their native language being used in English, they tend to pay greater attention to the lesson. Sometimes those same students will give the teacher a short lesson on the word based on the native language from which it’s borrowed.

Culture lessons can also provide students with an opportunity to learn about English accents. Most students don’t know about the variety of accents around the world or the differences in speech patterns that go along with those accents. Many are shocked the first time they hear a Boston accent or Pittsburghese, for example.

One of the top ways to get your students fully enthused about English and American culture is to highlight native English forms with authentic content from FluentU.

Thanks to the massive library, you’ll be able to find appropriate content that showcases many different components of American culture and history.

One of the best TV shows to use when discussing culture in an ESL class is “The Simpsons.” There’s a reason it’s been on TV for more than 500 episodes over 26 years; it’s part of American culture.

When “The Simpsons” first arrived in prime time on FOX in 1989, it was met with mixed criticism—many people disliked the characters’ attitudes and crude language, especially that of Bart. Family-focused groups wanted Americans to act more like the family on “The Cosby Show,” but over the years more families came to identify with “The Simpsons.”

Over the years, catchphrases from the show have entered the English lexicon—some have even been included in the Oxford English Dictionary. The dictionary has even written about ways in which the show has altered the English language. The first word attributed to “The Simpsons” to appear in the New Oxford Dictionary of English in 1998 was Homer’s expression, “D’oh!” The second word to enter the dictionary was “meh,” an expression of indifference.

The series is also responsible for a few made-up words that some fans have taken to using. In the first season Bart defined “kwyjibo” as a “dumb, balding North American ape.” Later the show coined the words “embiggen” and “cromulent.” The show is also responsible for reintegrating outdated words and phrases, mostly through outbursts of centenarian Mr. Burns and the ramblings of Grampa Simpson.

The use of made-up words in “The Simpsons” can encourage creativity among students who may feel embarrassed to speak when they’re unsure of a word or phrase. Showing that people make up words can turn up some interesting results in class, as students attempt to use the language they already know to explain more complex topics or directly translate from their own language (maybe your Chinese students will call a faucet by its proper Chinese name: water dragon head).

How to Use “The Simpsons” to Teach Culture in ESL Class

There are hundreds of episodes of “The Simpsons” to choose from for your class. They span a variety of topics for almost any occasion. In some cases, the show covered topics before they were even considered important subjects; the show has been on the air long enough for subjects to once again be trendy.

Keep in mind that as with all videos shown in class, you need to provide background beforehand. This may mean that you need an additional lesson or just 15-30 minutes before viewing the show in class.

You should always give students a handout with questions to answer based on the show—you may also want to include vocabulary words to review. (And because “The Simpsons” makes up some words, you should review such words before showing an episode in class).

Here are four episodes, and how you might use them in class: 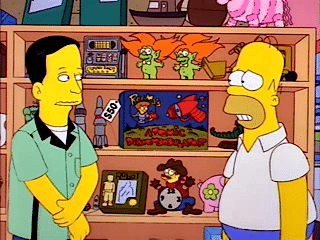 This episode from the eighth season revolves around Homer’s reluctance to accept gays in society. Like many of the earlier episodes, it’s a witty commentary on society with Homer playing the part of the illogically paranoid everyman, plus it guest stars John Waters.

To prepare your class for this episode, they should be familiar with debate concepts and strategies. Using more current articles from both sides of the gay rights debate, introduce your students to the topic and allow them to form their own opinions through classroom discussion.

While your class laughs at Homer’s schemes to ensure Bart is heterosexual, you can pause the episode to discuss themes of gay rights and paranoia.

Follow-up questions after the episode could include:

2. Homer vs. the Eighteenth Amendment 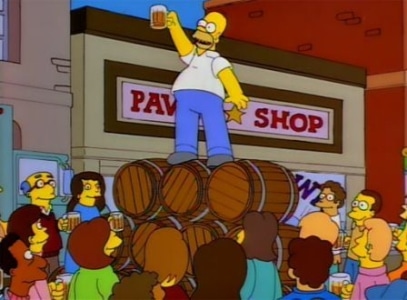 Another episode from the eighth season (when the series was in its prime) centers on prohibition in the town of Springfield. As Homer puts it, “They tried that in the movies and it didn’t work.” As the town cracks down on alcohol supplied by the mafia, Homer turns into a bootlegger.

This episode is an opportunity for teachers to introduce American history to a class. Combining this show with a lesson on the 18th Amendment and its subsequent repeal will provide students with perspective.

Using “Homer vs. The 18th Amendment” could be turned into a multiple-day lesson. You could begin with reading about the history of prohibition and bootlegging in America, and continue with discussions about its impact on American culture and relationship to rights.

Before watching the episode, provide students with a worksheet of questions about American history during the time period, as well as what happens in the show. Be sure to leave enough room for students’ opinions about laws and enforcement. 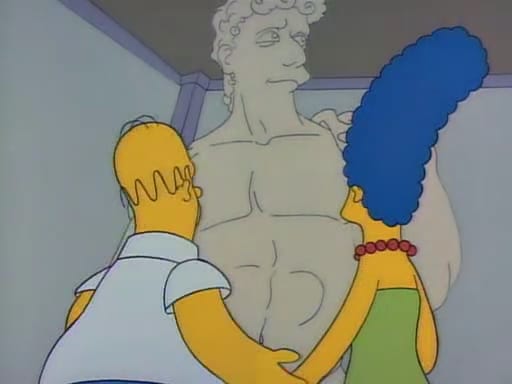 To continue educating students about rights in America, this episode from the second season delves into First Amendment rights. It’s also a commentary on TV violence influencing society. Toward the end it turns to artistic censorship with Michelangelo’s David and whether a person can be pro censoring one form of expression while against censoring another.

As with “Homer’s Phobia,” it’s best to prepare students with articles from both sides of the debate related to TV and/or video game violence (the latter will be more relevant today). You should provide background on the First Amendment and the Supreme Court’s comments on censorship of pornography and art (Justice Potter Stewart said, “I know it when I see it”).

After watching the episode, you can hold your own debate about censorship and the types of art that can and can’t be censored. You can also discuss whether or not TV violence influences children. 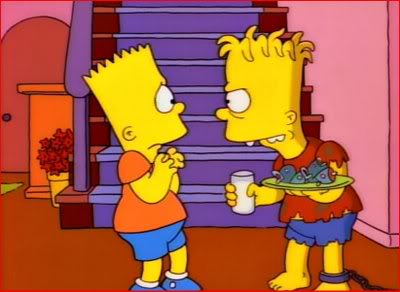 More specifically, watch the last part of the annual Halloween episode, which means it’s short enough to be a fun part of a single class. This ridiculous piece of Halloween fun can introduce students to American democracy and national elections. However, because this episode dates back to the 1996 presidential election, you will have to provide some background, particularly to prepare students for Ross Perot’s brief appearance.

In this portion of the Halloween episode, Homer discovers aliens, Kang and Kodos, have kidnapped Bill Clinton and Bob Dole and are now imitating the presidential candidates in an effort to conquer Earth. Homer’s attempts to thwart the aliens’ plan fail even after exposing them as “alien replicons from beyond the moon” because “It’s a two-party system; you have to vote for one of us.” When someone in the audience mentions voting for a third party, the alien responds, “Go ahead, throw your vote away.”

To add to the disillusionment of voters, when asked why people should vote for him, Kang disguised as Bob Dole responds, “It makes no difference which one of us you vote for. Either way your planet is doomed! DOOMED!” And at the end when humanity is enslaved, Homer’s comment on the situation is “Don’t blame me, I voted for Kodos.”

The “Citizen Kang” segment can be used as a primer to American politics or as a summary of what American politics has become. Out of all the possible “The Simpsons” episodes that could be shown in an ESL class, this one would generate the least discussion but provide the most entertainment.

There are many more episodes of “The Simpsons” that could be used in your class—there are also plenty of clips that could be used from all the years of the show—but the choice should be made based on the lessons you want to teach your students and how controversial you want the classroom discussion to be.

Matthew Lubin has taught ESL and academic writing to students of all ages and levels from a variety of linguistic backgrounds. His travel writing can be found at http://BoozeFoodTravel.com