Everybody has heard of Mt. Fuji.

And the temples, shrines and geishas of Japan’s big cities, like Tokyo and Kyoto.

Now, if you want to see bright, big cities and experience the magic of modern Japanese culture, hitting all the major cities should definitely be part of your Japanese itinerary.

But if you want something different, check out some of the beautiful off-the-beaten-path places that Japan has to offer.

Why Is Japan Beautiful?

Japan is noteworthy for its diverse array of natural beauty replete with oceans, mountains, waterfalls, forests, lakes and everything in between.

There are snow-capped mountains in the north and tropical beaches in the south.

There are all kinds of delicate and unique pagodas, temples and modern buildings—an homage to its rich architectural history.

Apart from the scenery, the culture is particularly beautiful, with Japanese people being known around the world as some of the friendliest and most hospitable humans on the planet.

But if you want to experience the full warmth and kindness of the Japanese people, you need to be able to communicate with them!

Of course, if you are going off the beaten path, you will realize quickly that many people in Japan don’t speak English, especially in these faraway places. Finding an English speaker in Tokyo can be difficult enough, but in a rice field in the middle of nowhere? Yikes! Knowing how to say some basic things in Japanese is extremely helpful, especially if you need to ask for directions to these remote sights.

And if you’re conversational in Japanese, you’ll not only be able to get around more easily, you’ll have the chance to peer deeper into the cultural heart of Japan.

If you don’t know where to start for your Japanese learning journey, FluentU is an immersive language learning platform that can help you learn conversational phrases, as well as local customs by watching authentic Japanese videos. You can learn a little Japanese, gain insights into the culture and prepare yourself for conversations the locals.

Knowing how to fluently mingle with Japanese society, both linguistically and culturally, will give you a much better experience than if you just walk into the country unaware of how to communicate.

The 7 Most Beautiful Places in Japan 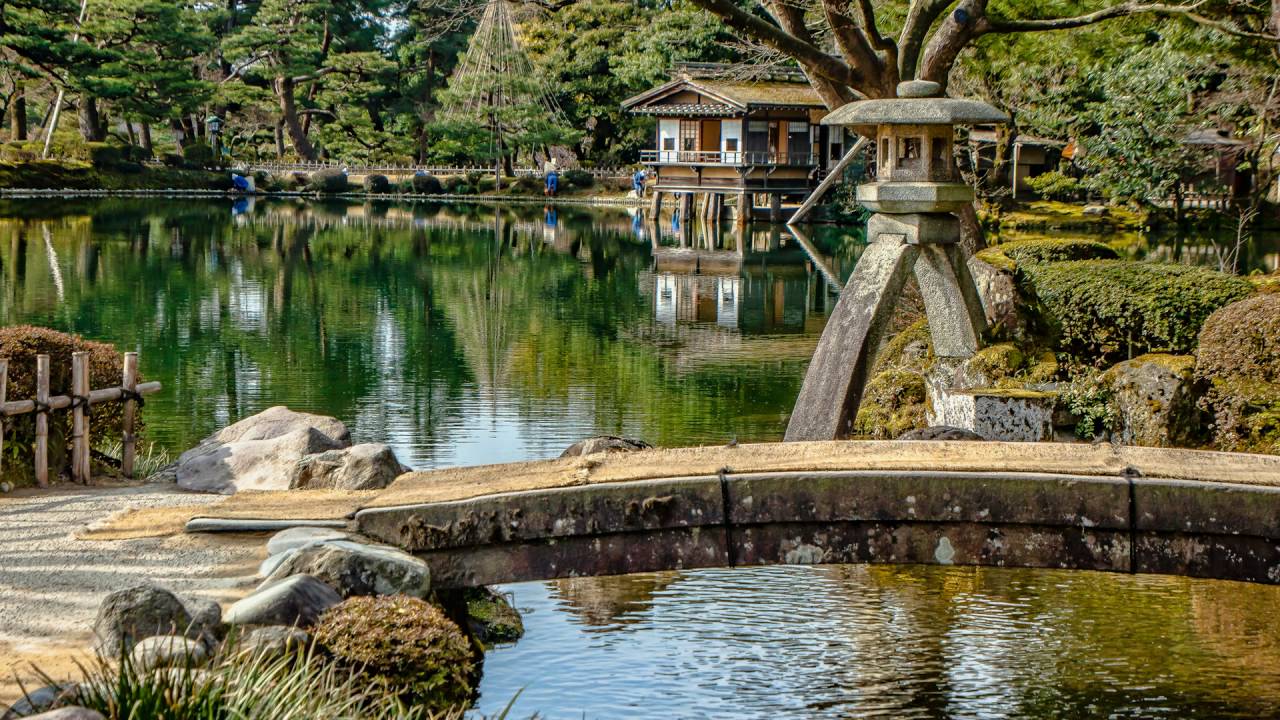 This beautiful place in the city of Kanazawa is regarded as one of Japan’s Three Great Gardens.

It’s chock full of idyllic ponds, bridges, zen monuments, stone lanterns and an assortment of old teahouses. All these features bring about a sense of peace as you stroll through one of the most authentic Japanese gardens in the world.

Developed between the 1620s and the 1840s by the Maeda clan, a group of ruling samurais, this naturally peaceful garden contains the oldest fountain in Japan, using natural water pressure tunneled up from the nearby Saigawa River.

Being a symbolic heritage of a great Japanese garden, there’s no bad time to visit. It’s beautiful all year round. 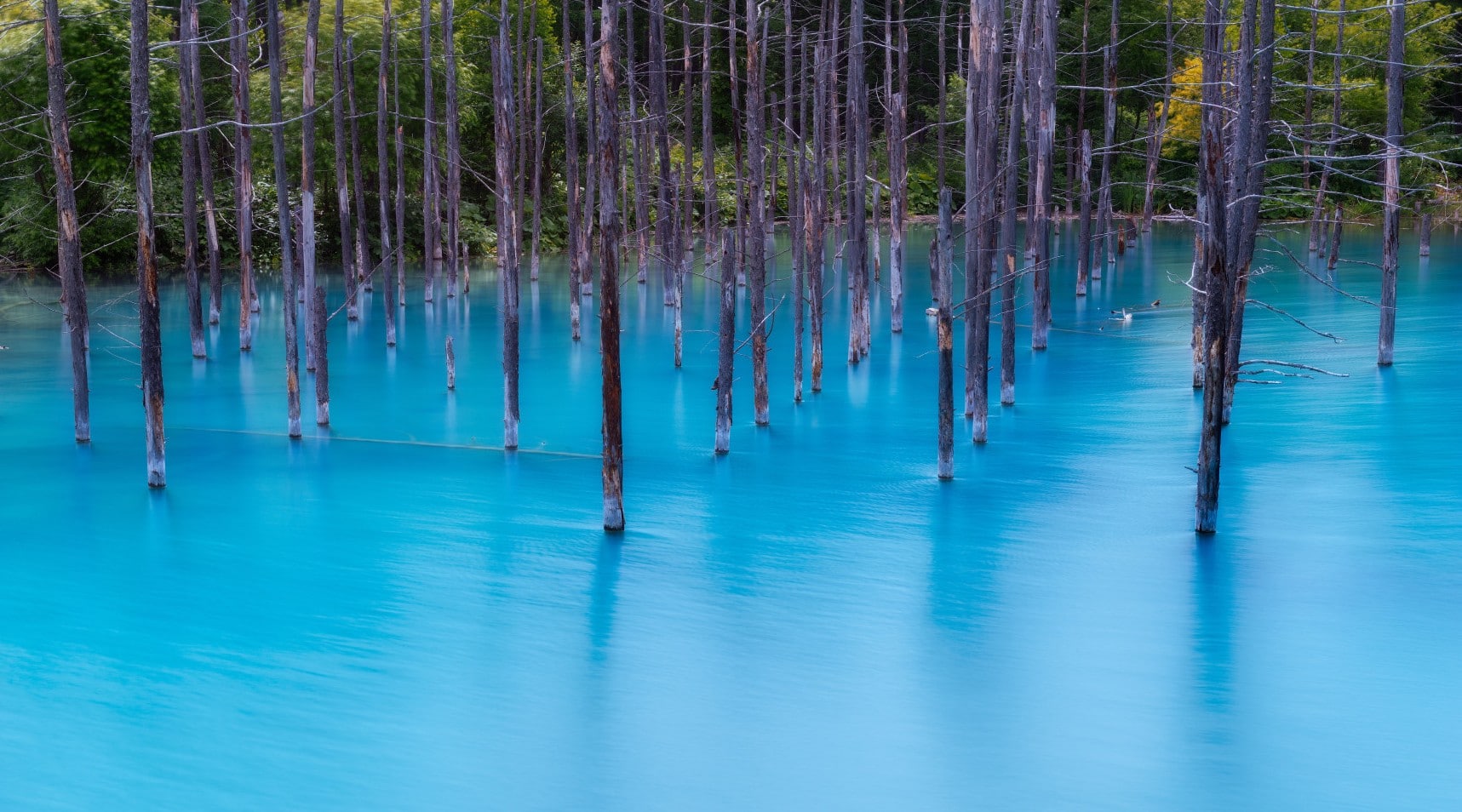 This man-made pond was a byproduct of the effort to dam the Biei River and protect the nearby town from volcanic mudflows. Through a series of extraordinary coincidences, the pond has turned into an extremely unique and beautiful sight.

The color of the pond, which has a mirror-like shimmer in stillness and a wild display of color as the weather changes, is a mixture of a lot of different minerals that have managed to sneak their way into the pond. The blue veneer, for instance, comes from the aluminum cliffs of the nearby Shirahige Falls.

To top off the exquisite color, several dead Japanese larch and silver birch trees line the interior of the lake, partially sticking out in an odd yet distinctly attractive way.

But the pond is only a single feature of the magical forest in which it resides—an amazing scene in its own right.

While there’s no bad time to visit the Blue Pond, it’s most “blue” in May and June. 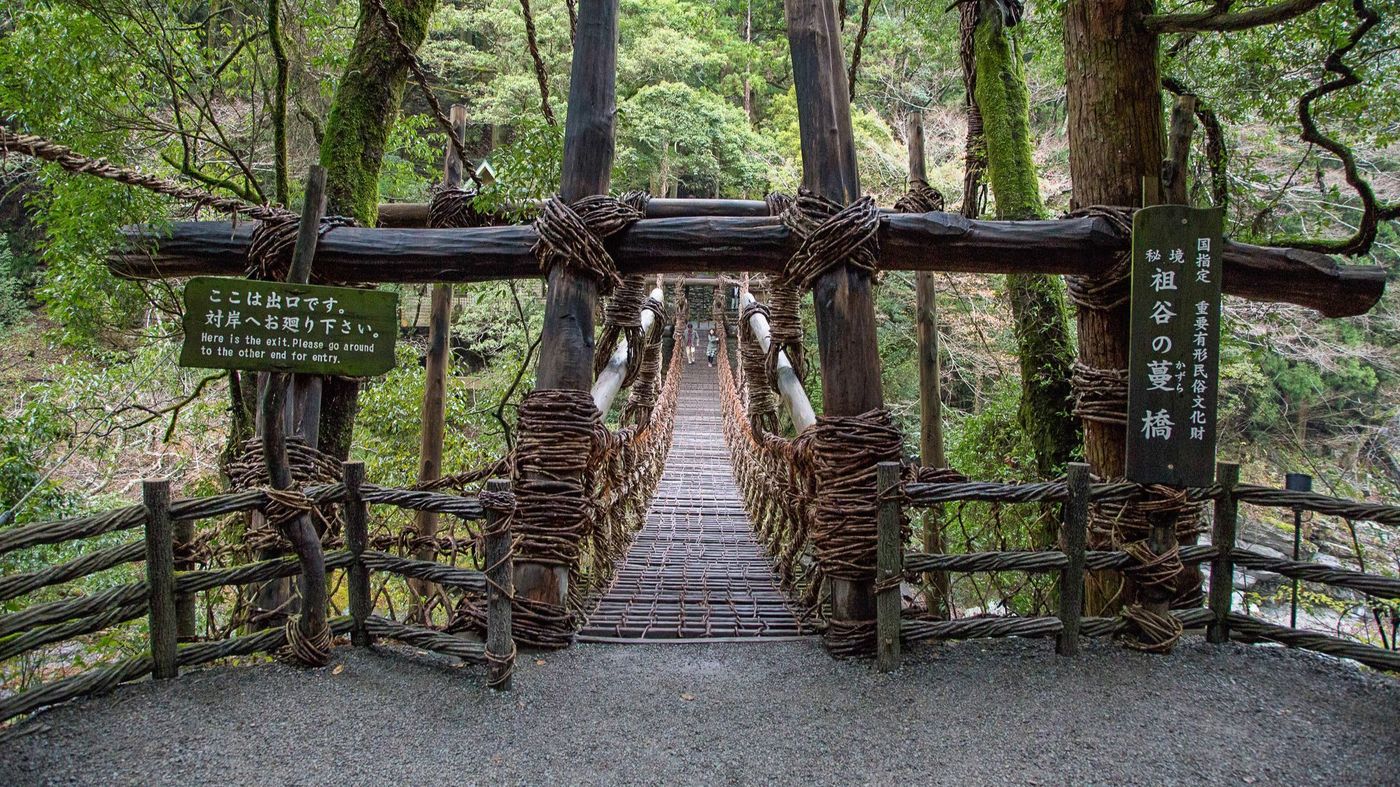 The Iya Valley is a remote and mountainous area buried in Shikoku Island.

Pair its remoteness with its steep and dramatic mountain faces and gorges, and the Taira clan decided this would be the perfect place to settle in the 1100s.

The defining feature of the valley is the gorge, which offers sweeping vistas across the whole area.

To cross the gorge, three of the many original vine bridges of the early settlements still exist and are well-maintained as tourist attractions. A much less nerve-wracking way to cross the river is by using the “Wild Monkey Bridge,” a wooden cart suspended with ropes traditionally used to transport goods.

Iya Valley is also a popular spot for hot springs and outdoor activities, as the natural tapestry of the area affords adventure seekers great sights.

While it’s beautiful to look at all year, some of the more popular attractions may be closed during the winter. 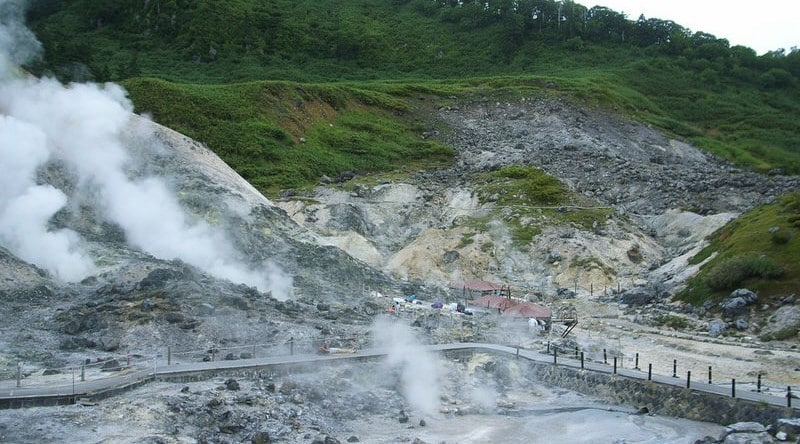 These two hot springs resorts in Towada-Hachimantai National Park are famous for having Japan’s most acidic hot spring waters. It’s this acidity which supposedly cures a lot of ailments, and Japanese people come from all over the country to bathe in the healing waters.

The grounds of these hot springs are gorgeous, with active volcanoes jutting up from the ground and hot spring steam covering the area with a dense yet beautiful mist.

Walking a few minutes from the Tamagawa resort into the valley, you’ll find the source of the hot springs. The hissing sulfur is incredible to take in as you watch this natural source produce around 9,000 liters of hot water per minute. It’s the most productive hot springs in Japan.

Tamagawa Onsen is also the starting point of a scenic hiking route to the nearby Mount Yakeyama, which ends at yet another hot spring.

The two hot springs are located only a couple of kilometers away from each other. Shin-Tamagawa stays open all year, but Tamagawa is off limits to day visitors during the winter.

While there’s no bad time to bathe in the hot springs, the autumn colors of the surrounding area are particularly beautiful. 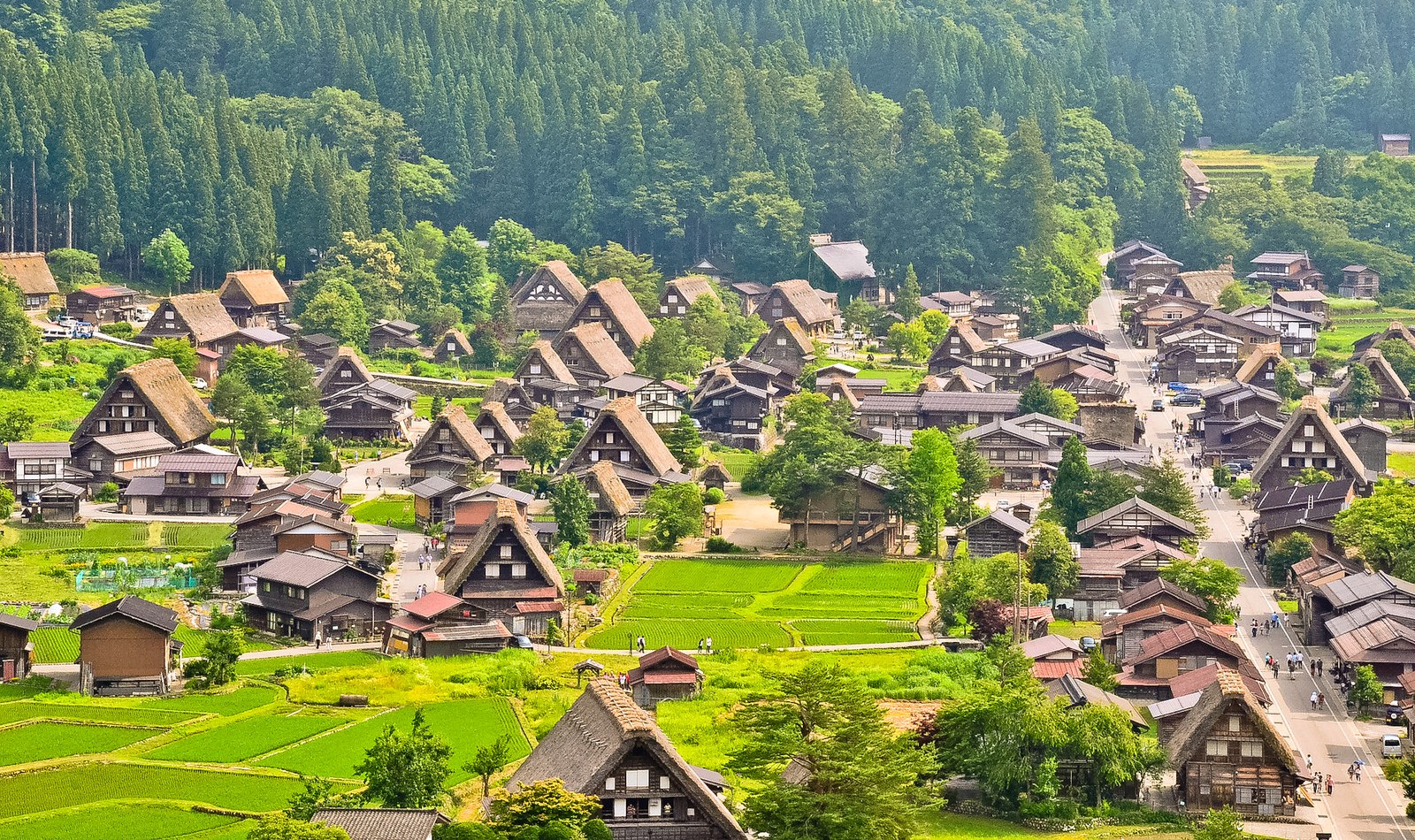 These two UNESCO Heritage Sites sit in the remote area deep in the Shogawa River Valley.

The towns are famous for their traditional farmhouses, many of which are over 250 years old. They were built with a special kind of thatched roofing which was designed to withstand lots of snow. The steep rooftops provide each house with plenty of space for cultivating silkworms.

The setting of the Shogawa River Valley is enticingly picturesque, with these quaint villages filling in the borders of its tranquil, mountainous terrain.

Shirakawa-go and Gokayama both have several villages, and they’re all worth exploring. About 32 km (20 miles) away from Shirakawa-go, Gokayama is much less developed and touristy than its neighbor, and it’s a little bit more challenging to get to. Its vibe is much more relaxed, with smaller and more intimate villages.

Both sites are open to the public year-round. But winter is when the valley shines with snow-covered beauty and the thatched roofs of the farmhouses display their engineering prowess. 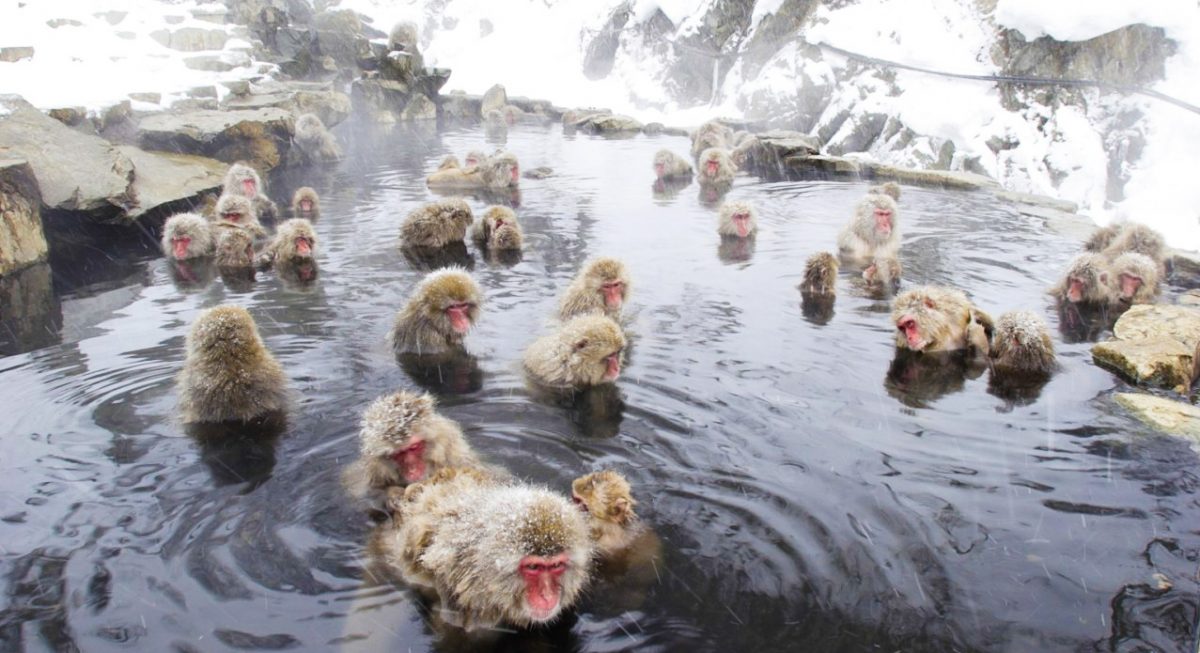 This beautiful hot spring in the town of Yamanouchi offers more than its serene mountainous setting with peaks reaching up to 2,500 ft. It also has monkeys!

The park’s Japanese macaques are often called “snow monkeys” because they live in areas where snow is covering the ground for several months of the year. And if you’re a monkey who lives in a cold climate, there’s no better place to live than near a hot spring.

These macaques descend from the high peaks above the Yokoyu River Valley to bathe in the hot springs of the Jigokudani Monkey Park. While traditionally only bathing during the frigid winter months, since park attendants have been feeding them, they stay in the hot spring all year.

The park is only accessed by a narrow, often snow-covered footpath, which is a 30-minute walk from the nearest road. This seclusion has helped the park maintain its peacefulness and natural beauty.

While you can go and see the monkeys bathing any time of year, the scene is especially spectacular during winter when there’s snow on the ground. 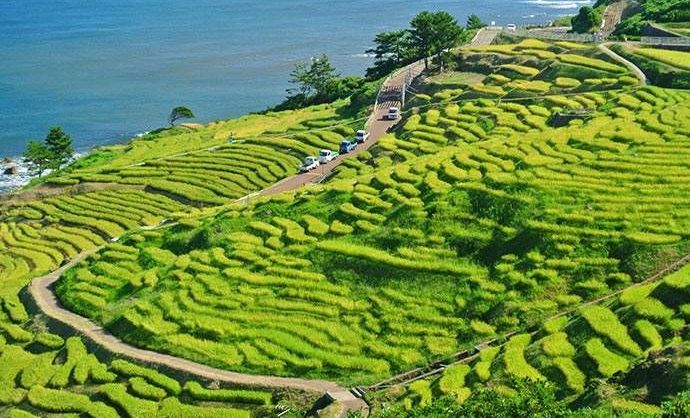 These beautiful rice paddies lie right off the coast of the Sea of Japan in the city of Wajima.

There are a little more than 1,000 rice paddies carved into the steep mountain slopes, producing a vivid contrast to the adjacent body of water. The rice paddies change colors as the sun moves across the sky, adding further contrast the neighboring sea.

The Japanese government marked the rice terrace as a Special Place of Scenic Beauty, and in 2011, the surrounding area was given the designation of Globally Important Architectural Heritage System.

Each season has its own special charm at the Shiroyone Senmaida rice fields.

In spring, the paddies fill with water and marvelously reflect off the sun. In summer, the rice sprouts up and showcases the fruitful harvesting season.

In winter, the paddies are covered with a delicate frosting of snow. And in autumn, thousands of solar LEDs illuminate the terraces at night producing a unique, impressive show.

We can’t deny that places like Tokyo, Osaka and Kyoto are amazing to visit.

But if you want to interact with authentic Japanese culture and beauty, you need to take the road less traveled! And you’ll be glad you did.