Rap music has some of the catchiest tunes in the industry.

It’s an ideal type of music for singing along. And there’s so much clarity in rap—it shows cultural nuances, spotlights relevant current events and gives a glimpse into the heart and soul of the artist.

Now, add Spanish to it and you’ve got an excellent resource for powering up your language skills!

Let’s check out some excellent rap options to liven up your study sessions.

How Spanish Rap Songs Will Help You Reach Fluency

When listening to rap music, focus on the ease with which it’s delivered. It’s an uncomplicated, rhyming music genre with a steady beat.

It’s easy to anticipate what comes next because lyrics are often repeated and it uses basic, foundational vocabulary. All of these make rap an ideal resource for a Spanish language learner.

Pay Attention to Slang and Idioms

Most rap music contains a few language “extras” that go a bit beyond basic vocabulary.

The slang or idioms commonly used in the lyrics are a vocabulary bonus! Learn them, use them in your conversations and get comfortable with their meanings.

If you think rap music is only for adults, think again.

Rap is being used successfully to help children learn.

The National Association for the Education of Young Children uses this type of music to teach diverse subjects, including languages.

They suggest rapping, creating rap lyrics and using repetition as ways to learn!

In this study conducted by the University of San Francisco, it’s clear that rap music is beneficial to language learners. The consistent beat provides a backdrop for pronunciation and the repetitive vocabulary reinforces language acquisition.

So it only makes sense that using rap songs will drastically improve your Spanish, too!

For even better practice, consider shadow rapping. This is basically Spanish shadowing—but instead of shadowing someone talking, you’ll shadow the lyrics as they are sung.

Shadowing is a language learning technique that encourages learners to repeat what’s being said almost instantly after they hear it.

For example, repeat a rap song’s first line either as it’s being sung or immediately after it’s finished.

This type of practice is great for nailing down pronunciation, learning new vocabulary and getting a feel for actually speaking Spanish.

One resource for shadowing rap songs and other Spanish music and videos is the online language learning program FluentU.

The hundreds of authentic videos come with expertly written subtitles so you can shadow along. The subtitles are also interactive, so you can click on any word to see a definition and to hear it used in other contexts—a particularly useful feature for the abundance of slang in rap music. 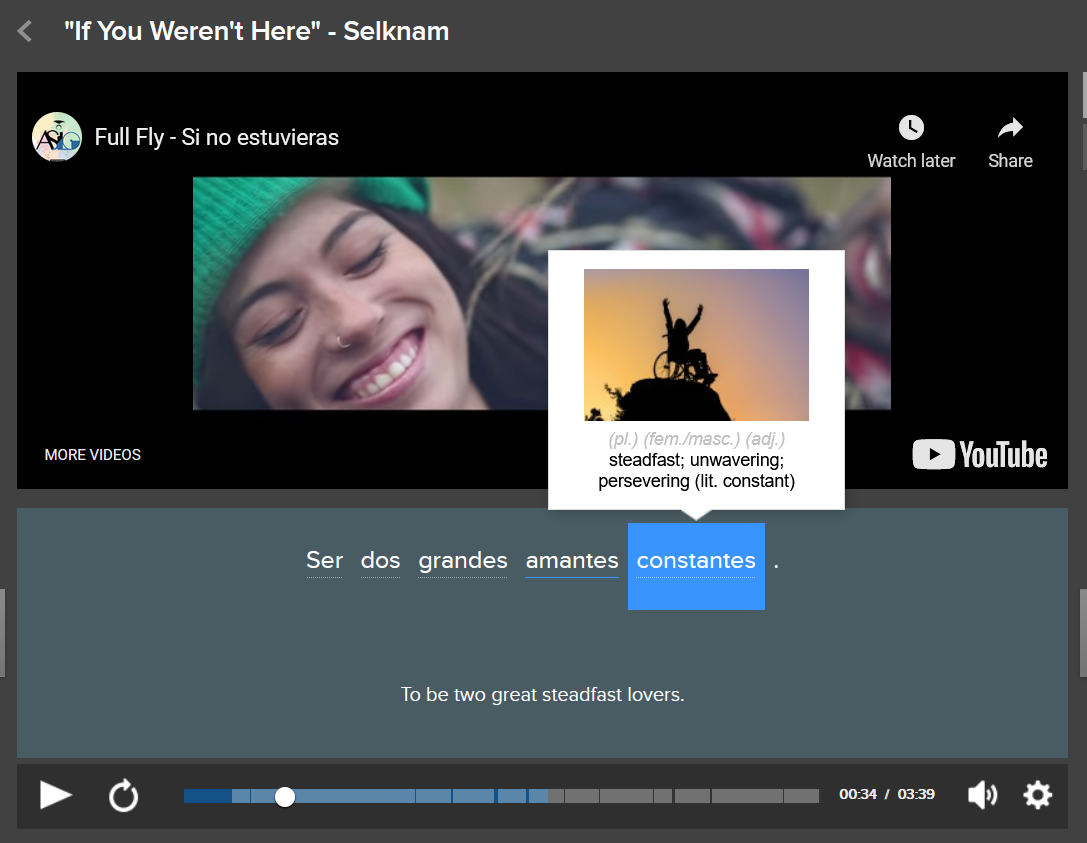 FluentU will also test you on the language from the video following it. Want to study these new words? Turn them into flashcards and use the built-in adaptive exercises to review them.

“Mi Gente” (My People) is a very concise, heartfelt song that’s great for all levels of learners, even beginners!

There aren’t any fancy lyrics or difficult phrases. Instead, it’s short and super engaging, with a steady rhythm that helps learners almost anticipate the lyrics!

“Dura” (Hard) has very few difficult vocabulary words in the lyrics. They’re basic and used repeatedly, so this is a great rap song for beginning learners to use for pronunciation practice.

Put this song on repeat to reap the benefit of excellent pronunciation! Strive to sound like Daddy Yankee—and have fun doing it!

“Que Calor” (So Hot) is a great rap song for anyone who wants to add a bit of slang to their Spanish language skills.

Saoco is a Puerto Rican slang term that means “to have excellent rhythm or a sauciness.”

The lyrics are easy to memorize and the rhythm is repetitive, which makes practicing Spanish pronunciation with this song an entertaining experience!

“Superbalada” (Super Ballad) is an excellent example of rhyming and repetition. Several lines are repeated so Spanish language learners should be able to shadow this song, or just sing along with it, fairly easily.

It’s a great song for intermediate learners to learn from, since these learners have a vocabulary that goes beyond the foundational basics.

Plus, this song has lots of cultural and societal references that give insight into traditions and some relationships. This is considered the “clean” version of this song.

The lyrics examine and discuss some serious situations and feelings that are more easily interpreted by those who have more than a basic Spanish skillset.

Use these lyrics to hone pronunciation, increase comprehension and just enjoy a story told in Spanish that’s likely relatable to many listeners. This is one of my favorites—it can grab a listener’s heart in the first few lines!

It’s a song that brings a tale vividly to life!

Language learners will appreciate the vocabulary that relates to nature, animals, the senses and languages.

It’s a lengthy song with many lines, so intermediate or advanced learners will benefit from translation, pronunciation and speaking (singing) practice with this rap selection!

This rap song has some adult lyrics, which is common with rap music so it’s not suggested for youngsters.

However, there’s so much value in it. Slangy terms are peppered throughout the lyrics, and the repetition makes this an easy song to sing along with—which is a perfect way to practice pronunciation!

“Un Nuevo Yo Despierta” (A New Me Awakens) — El Chojin

“Un Nuevo Yo Despierta” (A New Me Awakens) is a rap song that even beginning learners will benefit from using in their Spanish language program.

This one tells of new beginnings, which is a sweet story to tell, but it also makes wonderful use of some basic vocabulary.

There isn’t anything complicated about this one. Add the words and phrases to your conversational vocabulary to grow your communication skills!

“Gracias por No Ser Como el Resto” (Thanks for Not Being Like the Rest) is a song with a sincere meaning behind it.

It’s all about waking up, seeing what’s real and living your best life.

The lyrics are simple, the beat is easy to follow and it’s a solid rap song for Spanish learners to use in their programs. It provides basic vocabulary and an excellent chance to practice pronunciation!

Spanish language learning is a great adventure. And adventures should be exciting, interesting and loads of fun!

In short—your Spanish study time doesn’t have to be dull or quiet!

Plus, it offers lots of pronunciation practice opportunities. And it makes most of us get on our feet and dance! What’s not to love about that?

Add some Spanish rap songs to your program and crank up the volume. Remember that practice makes progress, so become a Spanish rap fan, learn tons of awesome conversational vocabulary and have a blast!