Shadows have so many dark connotations, but language shadowing is anything but dark!

Also known as “parroting,” this repetition technique adds some fun to your Spanish program and helps you speak with the pronunciation and intonation of a native.

There are loads of excellent resources that you can use to make Spanish shadowing part of your language plan—just simply listen and then repeat.

What Is Spanish Shadowing and How Can You Use It in Your Learning Program?

The basic tenet of shadowing is to listen to continuous, uninterrupted Spanish speech and repeat what you hear at the same time as the audio. Your goal is to be the audio’s echo and speak along with it as closely as possible.

Many courses have learners repeat small bits of vocabulary or phrases but that’s not the case with shadowing. Rather, learners listen to a long stream of narration and then attempt to repeat what they’ve heard—as soon as it’s spoken.

The point is to make similar sounds to the narration, with little or no focus on actually comprehending the words.

You’re looking to develop sound patterns and will eventually gain a better understanding of how to use accurate pronunciation and intonation.

There are two basic ways to shadow. You can repeat while reading subtitles or a transcript of what’s being said. Alternatively, you can shadow by only listening, without the aid of the written narration. The technique’s creator recommends that you start by shadowing through listening, which he calls “blind shadowing.” This’ll help you focus on the sounds, and not worry too much about the individual words or their meanings.

Mr. Arguelles even recommends that you walk around “rapidly, swiftly and with good posture” as you practice shadowing, to take your mind off what your mouth is doing and help the language naturally seep into your mind.

Translations are definitely helpful but let’s face it: Children don’t have that benefit yet shadowing works to help them build basic language skills.

Shadowing is useful because it mimics the natural method we use to attain language skills. It’s wonderfully useful at any time—just listen to a stretch of Spanish narration and begin repeating. Any source works; think radio or news broadcasts. This is a totally portable program add-on that gives a “feel” for the Spanish language. It’s easy to mimic cadence and pronunciation with this method!

The bottom line? Just speak! Repeat what you hear and grasp some Spanish, the same way we do with our native languages!

Spanish Shadowing: The Super Method for Learning to Speak Spanish

Any resource that features short films, video clips, news clips or narrative passages is useful for Spanish shadowing practice. For increased enjoyment—and to eliminate any possible boredom!—look for stimulating, relevant and interesting content for shadowing practice.

YouTube is a goldmine of Spanish audio. You can find audio from native speakers on literally any topic.

The video platform even offers some short films in Spanish. Films are fun to shadow since you get a wider range of voices and you can try to mimic each character’s tone and mannerisms, as well.

Although most have English subtitles, there’s a method for adding Spanish subtitles! Actually, there’s more than one way to do it and the in-depth explanation on the previous link seems easy to follow if you decide to go this route.

Remember, shadowing is still useful even if you don’t understand all of what you’re repeating. So with or without Spanish subtitles, these are good ways to get some shadowing practice in!

This is a poignant story of family love. A couple travels tirelessly in hopes of being reunited with their daughter in this short drama.

This animated short film masterfully portrays the tale of a scarecrow in search of friendship. It’s beautifully moving and while it does have stretches without narration, they’re so compelling that this is worth watching for both shadowing and pleasurable purposes!

Added bonus? There are Spanish subtitles already in place!

This Spanish short story is beautifully illustrated and is ideal for shadowing purposes!

There are dual English and Spanish subtitles and the narrator’s pronunciation is super clear and concise.

If finding YouTube videos with Spanish subtitles is too much of a hassle, no worries: FluentU has you covered. FluentU is a shadowing lover’s dream! 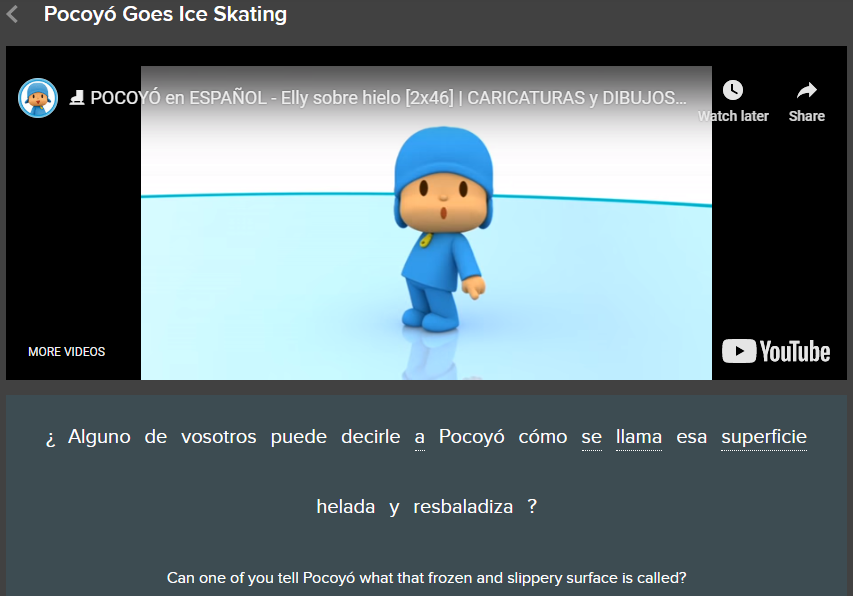 This charming cartoon might be for kids, but it’s the perfect starter for beginning Spanish learners to hone their shadowing technique while learning some new adjectives.

“What Should We Do?” 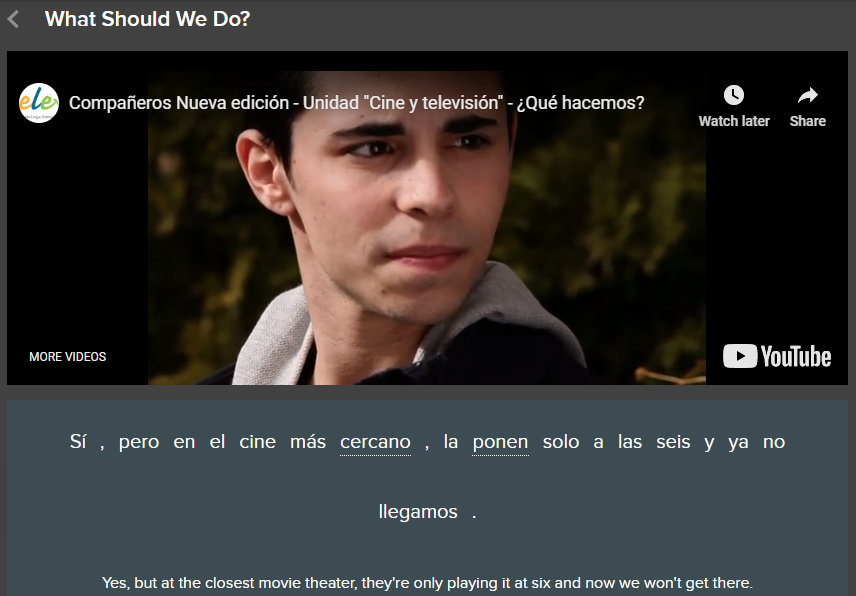 What do two guys talk about on a park bench? Everyday stuff, really. This clip is perfect for shadowing regular, natural speech.

“Music for All Types of People” 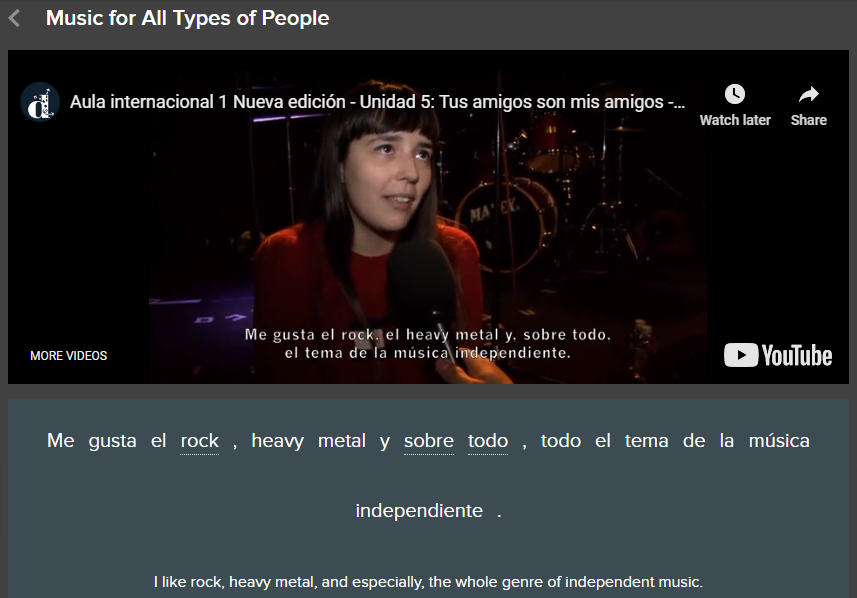 This video features a number of native Spanish speakers talking about their favorite music. Follow their natural speech patterns and learn how to pronounce your favorite genres in Spanish, and how to describe them.

Vimeo has some super short Spanish films which are ideal for shadowing.

The ones we’ve chosen here have English subtitles, which is very helpful, but for shadowing purposes it would be better to have them in Spanish. Or not at all—since the idea of shadowing is to grab a feel for the spoken language.

Captions or subtitles can be added to Vimeo films. They can either be added via file upload (if a learner has the video transcript or translates the dialogue from the English subtitles into Spanish) or purchased from Vimeo’s trusted providers. The process isn’t difficult so if you’re looking for Spanish subtitles, Vimeo has you covered!

All three of these Vimeo videos are engaging and entertaining. They all feature vocabulary that’s pretty uncomplicated and the speeds at which the speech is delivered isn’t so crazy fast that it’s hard to repeat.

Just jump in, repeat what you’re hearing and let yourself fall into this beautiful language.

This short film is about a man who’s been through an accident—and lived to experience life in a new, and somewhat different, manner. The question is: Is he a time traveler—or not?

This short tale features a boy visiting his grandparents, a girl with a story and a fear-provoking legend. If you don’t mind being slightly frightened, this is a good one to watch!

This charming tale about a happy princess and the king who desperately wants her secret to happiness is so entertaining you just might shadow it more than once. The vocabulary is basic, the plot and characters are sweet and the ending is heartwarming.

Shadowing gives Spanish learners a feel for the language, exposure to idioms and a method to practice speaking that’s quirky and interesting.

Additionally, it’s an absolute vocabulary gold mine! So much vocabulary to learn and from such interesting sources—what’s not to love?

The common saying “fake it till you make it” is applicable here. Shadowing encourages learners to repeat what they hear, to speak without worry of comprehending every line.

This technique is beneficial for native language learning and many have found it helpful for learning Spanish, too. You’ve got nothing to lose and everything to gain, so why not try shadowing?

Have fun and good luck!