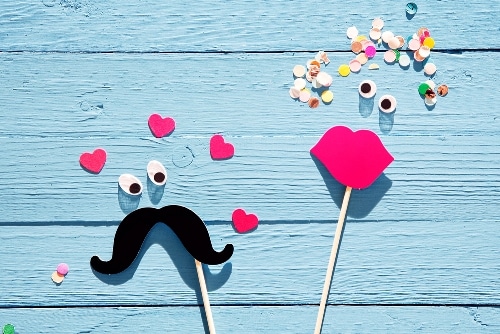 Why are frogs feminine in Spanish?

And, for that matter, why are bras masculine?!

Getting the hang of using gender in the Spanish language really can be hard at first, as it’s a relatively unfamiliar concept for native English speakers.

Sure, sometimes correctly applying gender rules can be a breeze, but there are times when the correct usage is more complex, unintuitive and a challenge to learn.

You might be wondering why it has to be so confusing—or asking yourself if it’s even necessary to learn at all.

What Do You Need to Know About Masculine and Feminine Spanish?

You may already know that every noun in Spanish is either masculine or feminine.

This gender is demonstrated by using the articles el (masculine) or la (feminine). You’ll also notice that noun endings can help you determine what’s what. Most nouns that end in o are masculine and most that end in a are feminine.

That’s so introductory Spanish, though! You may lose a bit of your Spanish-speaking ego when you realize that knowing this is barely scraping the surface of the concept.

So, what else do you know about using gender in the Spanish language?

Here, we’re going to dig a little deeper and go over a few of the trickier topics related to Spanish gender rules.

But first, be sure to take a minute to search your brain for what you already know. (And if you’re feeling a little rusty or haven’t learned about gender yet, here’s a great refresher.)

How much can change based on gender?

Whether an object is a “boy” or a “girl” may seem like a little thing, but quite a bit of the Spanish language is affected by it—more than what you might expect.

To become fluent, you’ll need to know how to take these nouns, adjust their articles, conform their adjectives, pluralize them when necessary, replace them with pronouns and more.

I know, it sounds a little intimidating, but once we get started it will all come together and start to make sense. Just to give you a quick peek at this, let’s look at the example, “How many white balls?”

In translating this question to Spanish, every word will have to change because the word “balls” is feminine and plural.

In Spanish, cuánto means “how many,” blanco means “white” and bola means “ball.” But we’re talking about multiple white balls here—according to gender rules, to make the sentence proper, we’ll have to make a slight change to every word. The correct way to ask this question would be ¿Cuántas bolas blancas?

So, it’s not too difficult when you notice how the endings match. It just takes a bit of practice and learning the ins and outs, which we’ll discuss now.

Masculine and Feminine Spanish: 3 Details That Are Often Overlooked

To get a better sense of these concepts and much more, look for examples of them on FluentU. FluentU takes real-world videos, like music videos, commercials, news and inspiring talks, and turns them into Spanish learning experiences.

Grammar Refresher: An adjective is what we use to describe a noun. While in English the adjective usually comes before the noun, in Spanish, it usually comes after. For instance, in the phrase el árbol alto, alto is the adjective. In English, it translates to “the tall tree,” and “tall” is the respective adjective.

Another difference related to adjectives is that an adjective has to represent both the gender of the noun it’s describing and its quantity. Most often, this means the ending of the adjective will change slightly.

Let’s look at the simple example, “the white rose.” “The rose” in Spanish is feminine and singular, so it’s translated as la rosa, and our adjective “white” in Spanish is blanco.

Since blanco ends in an –o, if we were using it to describe a masculine singular noun, it would remain unchanged. For example:

But since we want la rosa to be blanco also, to make it correct we just change the –o ending to an -a:

That’s not so hard, right? But it can’t always be that simple and of course there are exceptions. We know what to do with an adjective that ends in an –o, but with different endings, there are different rules.

Take a second to think of a few adjectives that end in –e.

We have grande (big), inteligente (intelligent) and verde (green)

When using these adjectives, it’s easy; their endings don’t change according to gender.

And this same rule applies if the adjective ends in a consonant.

Here are a few adjectives that end in a consonant:

And here they are used with both a feminine and masculine noun:

In English, one of the easiest things to do is pluralize nouns. And luckily, it’s just as easy to do in Spanish.

If you’ve already got the hang of what we learned in the last section, this should be a breeze.

Pluralization in Spanish is pretty simple; you just have to add a few s’s.

Let’s take a look at our example “the white rose” again. If you want to make it plural, all you have to do is make the article, the noun and the adjective plural by adding s on the end of each of them.

So, first you have to look at whether your noun is feminine or masculine, and then whether it’s singular or plural, to get your proper endings.

To make feminine nouns plural, the singular article la becomes las, and an –s is added onto the end of the noun as well as the adjective. See the above example of how la rosa blanca (singular) becomes las rosas blancas (plural).

And the same goes for masculine nouns, except the plural article of el is los. See the above example of how el perro blanco (singular) becomes los perros blancos (plural).

Sorry to have to do this to you again, but there are also few exceptions to this rule. But they’re not that difficult—if you notice, they use the same word groups identified in the above section:

If the noun ends in a consonant, instead of adding an –s, you add –es. Here are a few singular nouns that end in consonants:

To make these plural, it’s the same process as above, except an –es is used on the end of trabajador.

So to say, “the handsome workers,” it becomes los trabajadores guapos.

Just to make sure you got it, here a few more examples:

Grammar Refresher: A pronoun is what replaces a noun. In English, when we’re talking about a specific person or object and we’ve already mentioned it by name, we use pronouns to make our references to it less repetitive. The same is done in Spanish. Here are a few of the various pronouns in Spanish.

And for the feminine noun la bolsa (the purse) the direct object pronoun that will replace it is la.

And pretty much the same thing goes for plural nouns, except instead of lo and la, we use los and las.

For a plural masculine noun, the direct object pronoun that you can use to replace it is los.

Los escribí. (I wrote them.)

I know, that was a lot to take in.

But give yourself a pat on the back for making it to the end. These were a few of the trickiest rules about gender in Spanish.