If you need a break from going to class or reading a book, there’s nothing better than learning Spanish by watching movies.

It allows you to hear the language in real time, usually in the form of casual conversational speech, as well as introduces you to cultural aspects of the region where the movie is from.

And besides, it’s fun!

So you want to learn Spanish with movies, start right here with these nine study tips for learners of all levels.

1. Watch a movie you have seen in your language.

If you are already familiar with the plot of a movie, it will be easier to follow it in another language. This is a great way to start learning Spanish with films, so find a Spanish version of your favorite movie and give it a watch!

I suggest watching the movie with the subtitles in English first. Even though subtitles are usually a summary of what actors are really saying, they help you get the gist of it. At the same time, you are exposing yourself to the Spanish audio, even if it is not your priority at this point.

This allows for comprehension of the spoken Spanish and allows you to learn new Spanish words easier.

Whether you watch a contemporary movie overdubbed in Spanish or you watch a well-known classic in Spanish such as “Forrest Gump,” you can quickly learn new vocabulary in Spanish simply because you’re already familiar with the film’s content in English. This also gives you a leg up when learning new grammar structures. When you know a certain movie’s line in English, you can see how the grammar changes when translating the line to Spanish and better incorporate that in your own Spanish usage.

Once you are ready, turn off the subtitles. I suggest doing this by segments, particularly the first time you try it. Watching a whole movie in Spanish might be overwhelming, so split it up into segments.

Which part do you start with? Read on!

2. Focus on short segments where there is only one voice (or two, at most).

Not only are there many of variations of pronunciation and intonation in the different Spanish speaking countries, but each person also has his or her own way of speaking. Because of that, jumping into a conversation with many speakers may turn out to be a little frustrating (particularly if you are expecting to understand every single word that everyone is saying).

So when you are ready to turn off those subtitles, look for a part of the movie where only one person is talking. Remember that you do not have to do this in order! Go ahead and skip to the dramatic monologue at the very end of the film or a part smack-dab in the middle of the flick. You have already watched it, so you will not be spoiling it for yourself.

3. Do not feel like you “have to” watch a movie you dislike.

Let’s say you started watching a movie in Spanish… and you discover that you absolutely hate it.

It is okay to abandon it!

Just because you started the movie does not mean you have to continue it. If one film is not enjoyable for you, find another that is.

You should definitely find something of interest to you in the movie, whether it is the plot, the actors, the atmosphere… even the music. There is no point suffering through something you dislike. The whole point of using movies to learn Spanish is to have fun, after all!

4. Stick to one country.

You might be studying “standard” Spanish, but you have to remember that Spanish is spoken in many different countries. Just like with English (and many other languages), Spanish has local variants, even though they may be subtle.

That is why it is a good idea to focus on learning one variant at a time. The same is true for movies: Stick to movies from one particular country first. After you feel comfortable with that local variety of Spanish, “move” to another country.

And here is something to keep in mind: Each Latin American nation speaks its own type of Spanish, but in general they have more similarities with each other than any they have with Castilian Spanish (the “original” variety spoken in Spain). The latter has a more differences in pronunciation, grammar and vocabulary. And when it comes to vocabulary, the main differences are in words for foods, clothes… and curses! Other than that, there are more similarities than differences.

Which country you choose will depend on your learning goals, so make sure to take those into account. After all, there is no sense watching the Argentine films we list below if you are planning to move to Spain.

Although these are tips to work through a movie on your own, it would not hurt to get together with a friend who is in the same situation as you. He or she can supply those words/phrases/key points you missed, and you can help each other when either of you gets lost!

Moreover, this person can be your partner to role play the dialogues you already learned by heart when using tip number three.

Watching a Latin American or Spanish movie will help you learn the language and theculture. However, it might be helpful at first to watch your favorite movie in English by choosing the Spanish audio option.

That way, you would be enjoying a movie you feel totally comfortable with, and at the same time you would be learning how to say in Spanish those lines you already knew by heart in English. Famous movies like “Ghost” (“La sombra del amor”) and “Brokeback Mountain” (“Secreto en la montaña” or “En terreno vedado”) are often available in Spanish.

Practice your Spanish speaking skills by repeating the lines from the movie. It might feel at first like you are making fun of the actors. But mocking them might be just the secret to get closer to the original pronunciation and intonation of Spanish!

Once you have done this a few times, you can try “talking” to the movie. For example, choose a role in the dialogue. After you learn that role, pause and say each line before it is said in the movie. Then, listen to the original line and check how close you got.

Finished with one character? Change roles. You can also try recording your part and then comparing it to the movie’s.

8. Look up new words and review them.

The most effective way to learn from movies is to watch them actively. This means that you should take the time to write unfamiliar words down, look them up in a dictionary and review them on a regular basis.

However, if you’ve ever tried watching a Spanish movie as someone who’s still learning the language, this can be pretty time-consuming! You might spend even more time pausing the video and checking a dictionary than actually practicing your Spanish.

One study tool that can work for this would be FluentU, a Spanish language learning platform that combines authentic Spanish media with interactive subtitles. For instance, when you watch a movie clip or trailer on FluentU, you can hover on any word in the Spanish subtitles to see its definition.

Dual subtitles are available in English and Spanish, and the app includes a detailed video dictionary with example sentences. Another plus would be automatically seeing which tense a verb is in (since conjugations can get complicated).

This allows you to pick up vocabulary a lot more efficiently. For retaining new words, the app lets you do flashcard reviews and personalized quizzes, with exercises on speaking and listening.

FluentU is available on web, but there’s also an Android app and an iOS app.

As I mentioned in tip number six, it would be very helpful to start with one particular country first so that you can train your ear to that accent, intonation and speed. In my classes, I have successfully used the following Argentine movies. You might enjoy them, too, if you are learning Argentinian Spanish, so check them out!

In this 1995 film, a young “yuppie” and a retired old man make an odd couple in what ends up being a road trip to escape justice and find their destinies.

The young man is a cool social climber, while the old man is his exact opposite: an old-fashioned anarchist whose ideals never materialized. These differences are reflected in the way they speak. 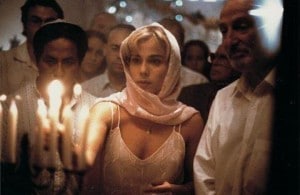 This 2000 movie focuses on a Jewish young man as his life intertwines with people outside his faith while he questions his beliefs and life style.

Most of the characters are young people from Buenos Aires, while Ariel’s boss is a native from Spain, so you will be hearing some authentic accents.

For practicing your listening, FluentU features Spanish videos with a wide range of accents, including videos from Argentina: 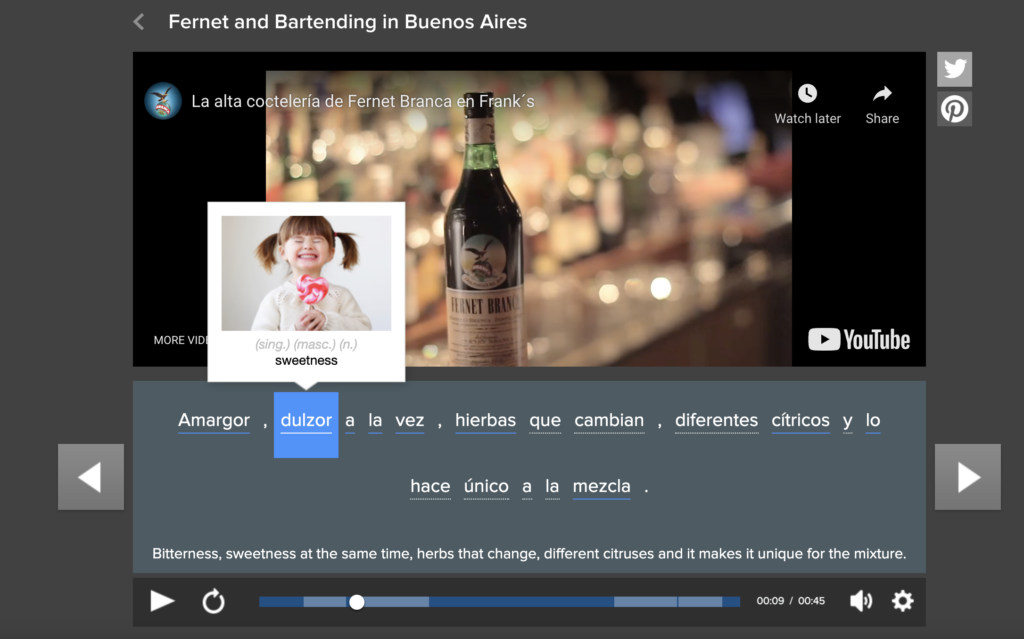 Each clip comes with interactive subtitles that also explain expressions and slang, which can be unique per region. 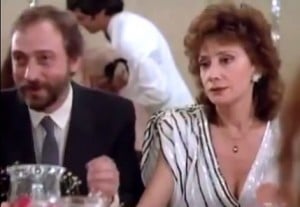 This story of two Argentine families that reflects the situation in Argentina around 1987, when the movie was made. One family goes to the United States as political refuges; the other remains in Argentina despite the difficult financial situation.

After a few years, the now “American” family returns for a visit and considers staying. But the other option to take the other family back to the USA with them, to fulfill “the American dream.”

Here, there is a contrast between the more “refined” Spanish of the family that lives in the States and the language of the working class family of a car mechanic who has always lived in the same neighborhood and uses a more colloquial, lower-standard Argentine Spanish. 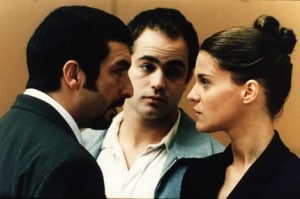 Two con-men trying to make a living think they have struck gold when a big scheme falls right into their laps.

Some of the tricks they try to fool people with are clear even if you cannot follow every word, because they are typical of any big city crook. If you are already familiar with the “trick,” that will help you understand the dialogues. 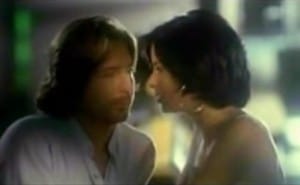 This is a grotesque 1998 comedy involving an Italian and a Jewish Argentine family.

Many slang words in Argentine Spanish come from the language of immigrants. Here, you will find samples of the slang that originally came from Italians and Jews but are today part of everyday speech in Argentina.

And finally: Sit back, relax and enjoy learning Spanish with films!

Do not worry if you do not get absolutely everything. Practice makes perfect. Remember the computer or the DVD player never get tired of repeating words a thousand times for you.

And if watching Spanish movies is something you enjoy anyway, you will not get tired and you will end up learning lots of new words and expressions!