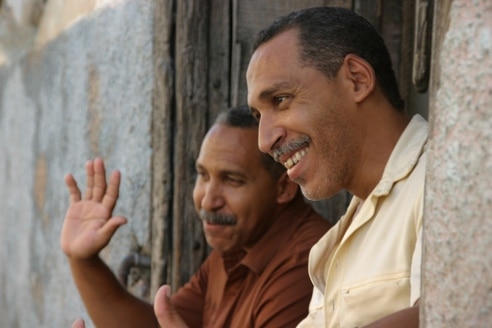 There was a time when Spain’s prescriptivists would tell you that the Spanish of Northern Spain was the only “real” Spanish and that all other versions of the tongue were deformed.

Thankfully that time has passed, and prescriptivists from all over the Spanish-speaking world now get together to dictate the rules of the various “Spanishes” that people, nevertheless, go on speaking, changing, inventing—or “deforming.”

Where does that leave you, as someone who just wants to learn “Latin American” Spanish? The bad news is that there’s no one version of the language to learn in Latin America, even if we could dismiss vosotros (informal you) and the other characteristic flourishes of the European variety.

The good news is that thanks to the Internet, increased travel and migration, and—above all in my opinion—telenovelas (soap operas), Spanish is becoming increasingly standardized across the Americas.

Still, as you progress with your language learning, you’re going to want to focus on one target dialect, depending on who you most want to be able to speak with. This blog has previously provided some excellent coverage of Chilean, Mexican, Argentinean, Ecuadorian and Cuban Spanish, and a jaunt through some of the most fun vocabulary of the Americas.

There’s also a good overview of the Americas’ contrasts with European Spanish.

The present post is intended to serve as a guide in six steps for those intending to learn Latin American Spanish but who haven’t settled on a particular region. We’ll cover a few regional particularities and then ideas for where to study and strategies for learning the local dialects.

Learn Latin American Spanish: 6 Ways to Dive into the Many “Spanishes” of the Americas

1. Use voseo in southern South America

The tú (informal you) that you learned in Spanish class gets replaced by vos in Argentina, Uruguay and, to some extent, in a few other countries. It’s considered perfectly correct in Argentina, and particularly there, using it is a great way to show that you value the local version of the language.

The conjugations of the verbs are quite a bit different from tú, and change slightly depending on the country that you’re in. An excellent guide to the Argentine version is here. A really quick and easy way to use it, however, is to say “bien, ¿y vos?” (good, and you?) when someone asks you how you are doing (¿Qué tal?).

2. Use preterite (instead of perfect)

Did you breathe a sigh of relief when you discovered that Latin American Spanish doesn’t have vosotros, and you could thus forgo learning an entire set of conjugations? Well it seems that every time a language gives you some simple freebie, it also wallops you with something else that’s extremely complex.

In the case of Latin American Spanish, you’re going to have to use the preterite a lot more than you would in European Spanish. Europeans tend to rely more heavily on the perfect tense, and the relatively easy constructions like he ido, has ido, ha ido (I went, you went, he/she went — literally, I have gone, you have gone, he/she has gone).

These are formed with the conjugated form of haber and the perfect form of the verb ending in ado/ido.

In Latin America, you use the preterite form for all simple actions completed in the past, and the preterite form has lots of irregular verbs. For example, the verb ir shown above becomes fui, fuiste, fue, fuimos, fueron (I went, you went, he/she went, we went, they went).

For example, if you went to the market this morning and have returned to your lover with a basket of goodies, you would explain that like this.

There’s no way around this. You really have to memorize all of those irregular ones if you want to speak even passable Latin American Spanish.

Best practices for learning this include flashcards, watching videos from Latin America that make use of the past tense and writing/telling people stories about past events in your life in order to practice what you’ve learned. (Those first two suggestions are handily accomplished with FluentU’s app, available on iTunes and the Google Play store)

For further studying, preterite conjugations are readily available at wordreference.com.

3. Pay attention to Spanish in the USA

Spanish is the second most-spoken language in the United States, thanks first to the country’s long history of conquests in Spanish-speaking lands, and later to migration that continues to this day. Hispanics are one of the fastest-growing demographics in the United States, making the language economically and culturally invaluable for anyone living there.

Spanish in the USA shares many of the features in pronunciation and grammar of Spanish from other parts of the Americas. One area in which it’s more unique, however, is the incorporation of English grammar and words, i.e., Spanglish. It isn’t uncommon to meet people in the United States who speak both languages “poorly,” but another way of putting it is that they’re creatively mixing the two to create something new.

One example of how this occurs is the use of calques, or overly literal translations like llamar para atrás (to call back). The more Spanish way to say that would be volver a llamar.

Another calque heard in the USA is sabe cómo hablar inglés (he knows how to speak English) instead of just the more “correct” sabe hablar inglés. Yes, the ubiquitous “like” is becoming contagious. There’s more interesting coverage of calques here.

Then there are the words that get borrowed (and sometimes Hispanified) to enrich American Spanish vocabulary. Some of my favorites are the verbs that add an –ear to become Spanish-ish: telefonear (instead of llamar, to call), parquear (instead of estacionar, to park) and lunchear (instead of almorzar, to have lunch).

Pronunciation varies widely across the Americas, making this a dangerous subject to generalize. But one thing we can say is that the accents have a lot in common with Spanish of Southern Spain (from which many people emigrated to the Americas back in the day). Here are some of the most common features of pronunciation in Latin America:

5. Pick your destination to study Spanish in Latin America

Some of the more popular destinations for Spanish study in Latin America are Argentina, Chile and Costa Rica. These are relatively stable and better-off places with good universities and a history of welcoming foreign students.

The disadvantage of these places is that you won’t be alone. If your goal is to “lose yourself” in a Latin American culture, you can certainly do it anywhere, but it will take more effort if there are lots of other foreign students around.

I went to Santiago, Chile on a study abroad program in university because my study abroad counselor had nothing much to say when I asked where she thought I should go, and handed me a brochure seemingly at random. “You should go somewhere based on what culture you’re interested in,” she said, but of course I had no idea what any of the cultures were like.

Making your own decision based on your personal interests and course of study is of course great advice, but here’s what I wish someone had said to me then, a bit more simply: Go to Buenos Aires if you like big, fascinating cultural cities. Go to Costa Rica if you like fabulous, relaxed people and pretty rainforests. Go to Peru, Ecuador or especially Bolivia if you want more of an adventure, great local music and real immersion away from so many other foreign students.

In a misguided effort to be accommodating, people you meet in Latin America will sometimes simplify or even Castilianize their speech when speaking to a foreigner. You should encourage them to speak their own version of the language; it will both help them value it and help you learn.

You can reinforce this by asking them about new local words and phrases, noting them down and employing them in your own speech.

Eventually, you’ll get to a point where locals don’t even think of you as a foreigner and will speak naturally—and that’s when your Latin American Spanish will really start to take off.

Mose Hayward has lived and traveled in many Latin American countries, and blogs about fluency for lazy people, as well as dancing and romantic adventures for travelers at TipsyPilgrim.com