How to Learn Spanish Grammar in 10 Simple Steps

When I began studying Spanish in 2008, I developed some great strategies for how to best learn Spanish grammar.

Even though I still find myself stumbling over the subtle nuances of the language at times, I can safely say that I know how to avoid falling into bad habits.

Let me share some of the best strategies I learned for tackling Spanish grammar.

For a thorough overview of all the most important Spanish grammar topics, please see:

Do you need a complete guide to Spanish grammar? We have you covered with this thorough summary and master list of Spanish grammar posts from our language experts. This…

Every grammatical person in Spanish is conjugated differently, and this makes learning Spanish grammar particularly difficult for native English speakers. When I first began studying Spanish, I soon decided that I needed to make things a lot simpler. I concentrated on perfecting the present tense and I simply ignored the fact that the other tenses existed.

When I wanted to share information about the past, I used the present tense alongside words like ayer (yesterday) at the beginning of the sentence. Similarly, when talking about future events, I spoke in the present tense, but threw words like mañana (tomorrow) or la próxima semana (next week) into the mix to keep things clear.

Three months of speaking only in the present tense will give you the exact kind of training necessary to then tackle the many complexities of other tenses in Spanish. Plus, you’ll use the present tense so frequently that it’s great to have it mastered.

2. Practice the past and future tenses in private conversation classes.

After three months of speaking in the present tense, I decided to invest in a series of private conversation classes to practice conjugating in the past and future tenses. The conversation classes gave me the special attention I needed to make progress in this area. Having spent so long talking in the present tense, I was also pleased to find that I grasped the use of future and past tenses a lot quicker than I’d expected.

3. Keep a notebook purely for noting down the gender of nouns.

English nouns don’t have a gender, which makes the application of gender in Spanish that much more complex for the native English speaker. I found that when it came to gender, I had to keep a notebook with me at all times. The notebook was divided into two columns, front to back. One for masculine nouns and the other for feminine ones.

As time went on, I had grasped the general rules and noted down most common words. After some time had elapsed, I only used the notebook to record irregularities. In general, nouns which end in “a” are feminine nouns, but the Spanish language is full of exceptions to the rules. El clima (the weather) is a perfect example. It ends in “a” but it’s a masculine noun. My notes on the irregular nouns were what really helped me to move from basic to intermediate level Spanish grammar.

4. Write in Spanish every day.

Whether you’re filling in exercises from a Spanish grammar book, writing some creative prose or even contributing to a daily diary in Spanish, you must make a point of writing in Spanish every day. Start a Spanish learning blog if you like.

The only way to perfect Spanish grammar is to put your skills into practice and find out where your doubts lie.

I kept a diary in Spanish when I was learning. I came up against a brick wall of Spanish grammar doubts every day. In these moments, I had to research a little and find out how to express myself correctly before being able to continue. It was definitely one of my most successful self-help grammar tricks.

5. Take a specific course in the use of the subjunctive.

The only time we ever use the subjunctive in English is when we use constructions like, “if it were up to me, I would tell him how much I loved him.” In Spanish, the present and past forms of the subjunctive are used constantly.

It’s really difficult for native English speakers to get a grip on this area of Spanish grammar. That’s why it’s important to incorporate the help and advice of a trained professional. Intensive programs that focus on the subjunctive are the best. It’s also important to have a solid grounding in the fundamentals before taking on the subjunctive.

Desde (since/from), pero (but), sin embargo (however), mientras (while), de todas maneras (anyway) and por lo tanto (therefore) are popular connectives which can be used to help you construct longer sentences and hold down longer conversations.

I found that by learning which connectives could be matched with the present, the past, the future, the conditional and the subjunctive tenses, I could better remember the grammatical order of a variety of sentence structures in Spanish.

I began approaching Spanish grammar from a mathematical point of view.

2 + 2 = 4, and in Spanish grammar, desde que (since) is always followed by the present or past subjunctive of the verb.

7. Read, read and then read some more.

When you read in Spanish, you learn how Spanish grammar works. You see the correct way to construct sentences and you can compare your writing with that of others. The only important factor to bear in mind is that source materials must be trustworthy.

Reading comes in all forms—besides conventional literature, blogs, recipes and movie subtitles can all be used for reading practice.

I personally made time to read internationally recognized online magazines and newspapers every day. Not only was I able to keep up to date with current affairs, but I was also confident that the Spanish grammar I was reading was correct.

8. Find the patterns between English and Spanish grammar.

Finding patterns helps to highlight grammatical differences between two languages. I found this kind of study very useful. When I found grammar patterns, I was able to translate correctly. Many people make the mistake of making literal translations when communicating in another language, but it’s rarely a good idea. Spanglish is the product of poor translation. Make use of patterns.

The more Spanish content you consume, the more patterns you’ll discover along the way. Just watching Spanish videos with English subtitles can help you form associations between what you hear and the corresponding translation.

You can also take this a step further and embed a learning element into your Spanish video watching with FluentU. This program shows you authentic Spanish-language videos like movie clips and music videos, but it does so with the support of optional Spanish and English subtitles. 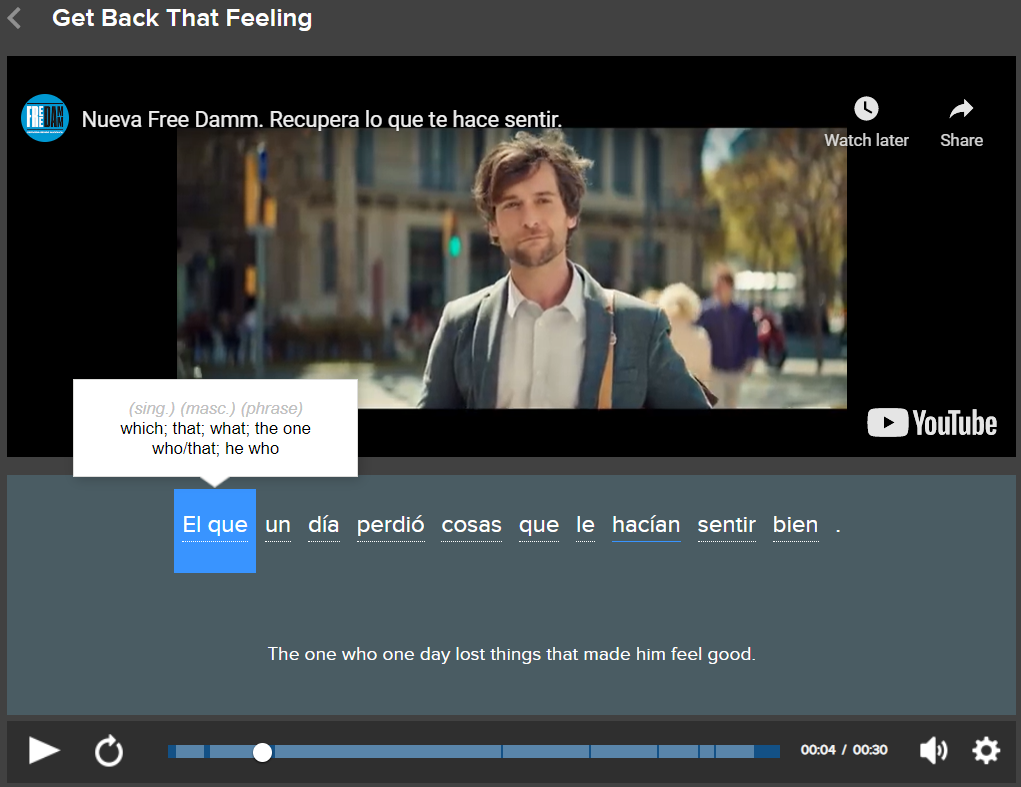 These subtitles also encourage active watching—we all know what it’s like to get sucked into the story and just read the English subtitles instead of actually studying—by adding an interactive element to the subtitles. This means that you can check the meaning of any word by hovering over or clicking on it, showing you even more context through example sentences, audio and video clips.

You should always be watching with a pen and paper on hand so you can write new words down. On FluentU, you can just save new words to flashcard decks then review them when you’re ready through personalized quizzes. Plus, the built-in dictionary is contextual so you always know exactly which meaning of a word is being used in a particular scenario. 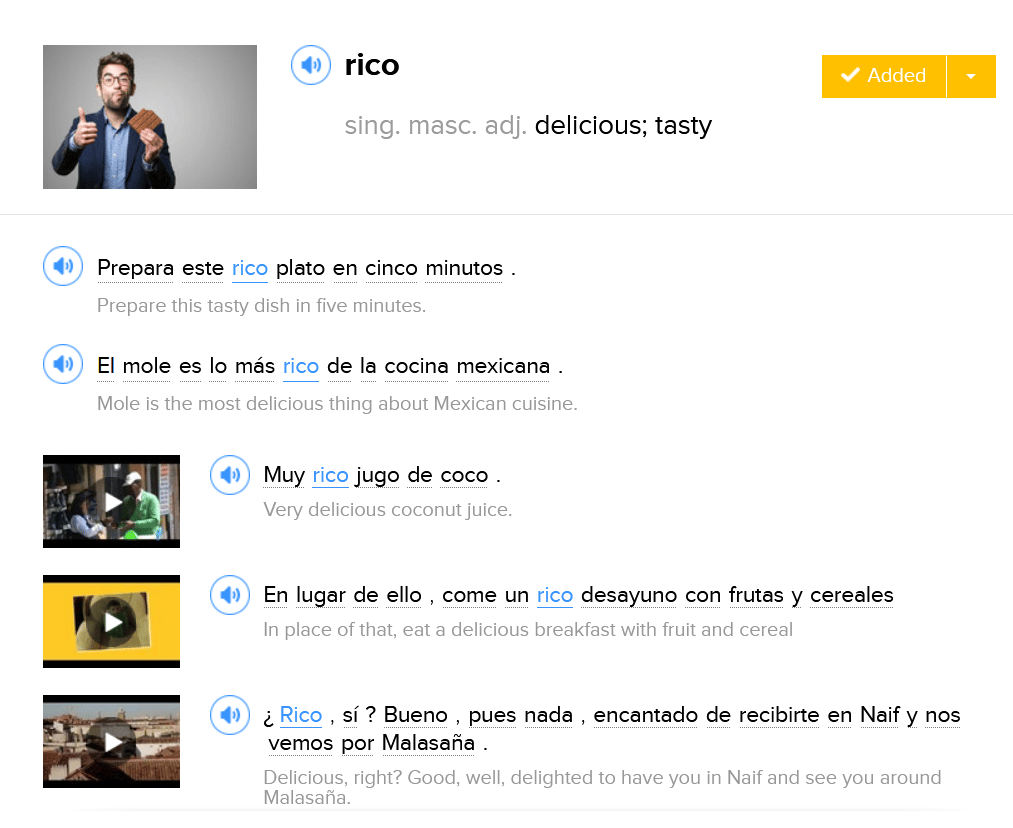 You can use FluentU on a browser or in the iOS or Android app. Watch engaging videos and learn, keeping an ear open to the patterns, in particular.

Always incorporate tildes and other accents into your writing when communicating in Spanish. I really cannot emphasize this enough. It’s also essential to get into the habit of writing out every single word in full. Whether you’re sending a formal email or texting a friend, you should write correctly.

Some of my friends, who started to learn Spanish at the same time as I did, have ended up with very weak writing skills. When I write in Spanish, I write with confidence. I made my life easier by incorporating spelling and accents into my writing from the very beginning. I made them part and parcel of my learning experience.

Hablo (I speak) is very different to habló (he/she/it spoke) and it’s important to always demonstrate the distinction. You’ll find that, if you make the effort to write correctly in the early stages, you won’t have to think so much when writing in the future.

10. Have fun and enjoy the easy elements of Spanish grammar.

Spanish grammar is, for the most part, dense and confusing, but there are some elements that are wonderfully clear and simple. When using conditionals, for instance, you only have to add “ía” to the end of the base form of the verb.

It’s important to revel in these moments, because when you’re having fun with the language, you’ll learn more. When Spanish grammar makes it easy for you, smile, laugh and, most importantly, have fun chatting away in your second language.