Everything in Spanish is either male or female.

The language is charged with gender power.

If two words are not paired correctly, the imbalance creates waves of discomfort in its users.

The following tips regarding Spanish gender will help train your brain to recognize, categorize and eventually produce gender accurately while speaking Spanish.

A noun is born: Male or female?

A noun is a person, place, thing or idea. Every noun in Spanish has a specific article that denotes the gender of the word.  They can be definite or indefinite and have four forms:

Living Creatures are referred to by the gender they represent

This one is simple.  Every living creature is either an  el or a la. If you are an English speaker you have always referred to creatures with the.  The Spanish language is a lot more detailed in this respect. It loves to observe and categorize the differences. With this in mind, take note of the first two rules for mastering Spanish gender:

Beware of the gender trap!

The following examples clearly illustrate how objects commonly associated with each gender do not follow the rule.

To keep you from falling into this trap, a very important step you can take is to experience and interact with these nouns through authentic mass media, like movies, books, and TV shows.

You could also use a virtual immersion platform. FluentU, for example, has interactive captions on all of its videos, which will make it easier to see which gender is used in a given situation.

As you watch authentic Spanish videos like movie clips and news segments, you’ll have subtitles to support you. These subtitles come in Spanish and English, though you can turn either off as you wish. By clicking on any word, you can see a breakdown of its grammar, contextual definition, example sentences and other videos on FluentU where you can hear the word used with the same meaning. 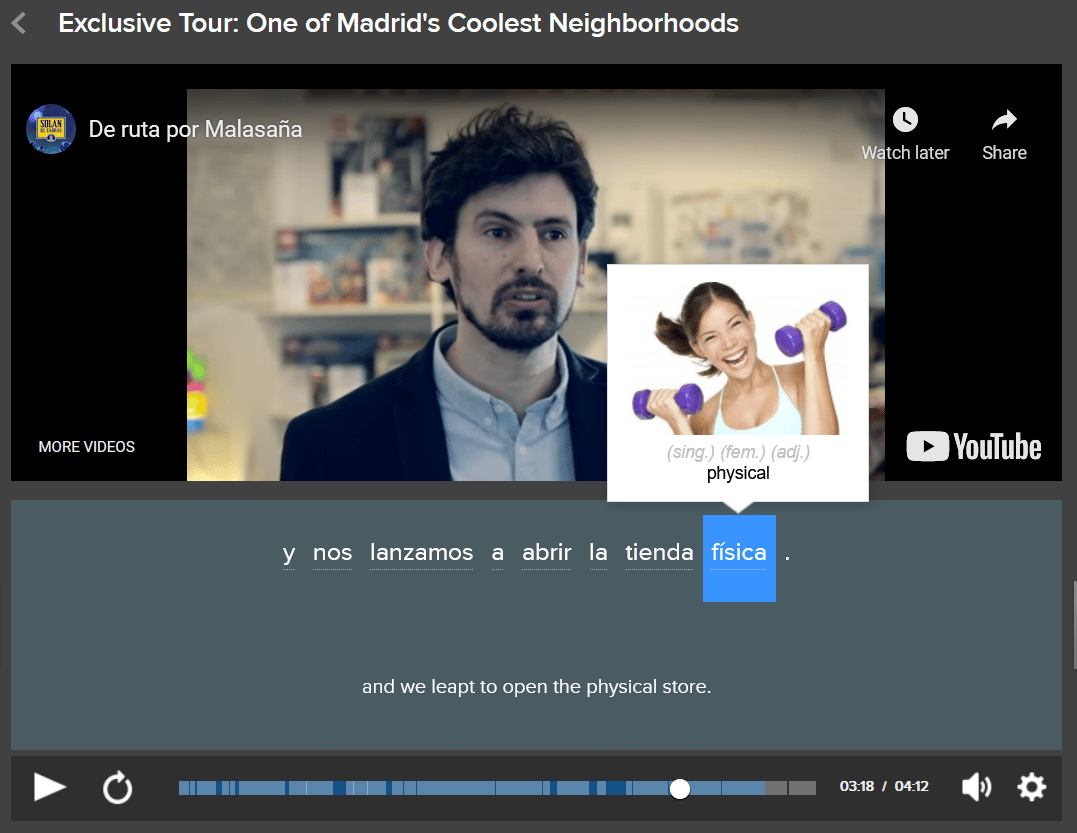 Save words to flashcard decks so you can come back to them when you’re ready to review. Practice using these gendered words correctly through exercises that have you seeing the word in writing, hearing it spoken, typing it in and even speaking it. Get the iOS or Android app for mobile learning, or use FluentU in the browser.

So, be sure to get in your authentic Spanish practice to really get these genders down.

Ready for our last six rules?

The Masculine in Spanish

When there is a crowd or a group of people, animals, ideas or things that have a mixed gender, what gender is used?

If you answered, “the masculine gender is always used when there is a mixed group,” you are already thinking in the same direction as the Spanish language.

The masculine gender has more power than the female gender when it comes to making the rules. Although the words have the same value, the male acts as the default leader. To make the word feminine you simply add the feminine “a” touch.

Some nouns that refer to professions do not change their forms.  This does not mean that the importance of gender disappears.  If the word does not change, the article is in full charge of specifying gender.

Optional brain exercise* Make a list of nouns that currently surround you (wherever you are) in English (you decide on how many you want to attempt).  Try to guess their gender in Spanish.  Look up the words and see how many you got right and what rules you recognize.

Languages exist within a strict framework of rules, yet they are alive, they are dynamic, and the are continuously evolving.  Therefore, there are always exceptions to the rules, and these exceptions, in turn, create new rules.

Best Practices When Learning a Language

Remember, learning a new language is not a result but more of a process! It is important that you set a daily routine for your language learning that excites you and allows you to see results.

As it relates to gender, familiarize yourself with the rules. Listen carefully for them when watching your favorite movies. While reading a comic or newspaper, circle the gender agreements that most surprise you. Above all, find someone to practice with!

You will quickly catch on to the patterns, nuances and subtleties of the language this way. Think of how small children learn language for the first time. A ton of listening, a lot of gibberish, some clarity with mistakes, increase in vocabulary and finally fluency!