Flirting in Spanish: 75 Words and Phrases for Charming Your Crush

They say that pillow talk is the absolute best way to learn a language, and it makes sense.

I would even go so far as to encourage you to use dating apps to practice your Spanish skills.

Ah, but dating in another language isn’t without some struggle.

So here’s some vocabulary to help you flirt in Spanish and perhaps even find love.

How to Pick Someone Up in Spanish 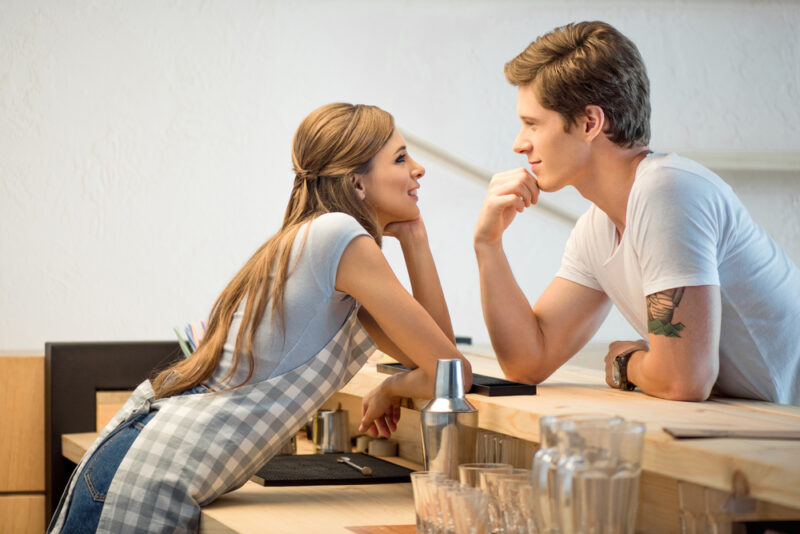 First things first, you need to nab the person you’re interested in. You need to get their attention, break the ice and get the conversation started.

So, you’ll need to know how to coquetear (flirt). Let’s have a look at a few different scenarios.

Scenario 1: Talking about where you’re from

The first question you’ll almost undoubtedly be asked when you’re in a restaurant or bar is:

¿De dónde eres?
(Where are you from?)

You can respond with:

If you get bored of answering the above question (I know I do), just lie:

Tengo un acento un poco raro porque un mono me enseñó a hablar.
(My accent is a little strange because a monkey taught me to speak.)

Scenario 2: Offering to buy them a drink

You see that handsome person sipping a drink and you want to approach them. But what should you say?

¿Qué estás tomando?
(What are you drinking?)

The smoothest, dream answer is:

In the worst-case scenario, the object of your desire simply ignores you or says:

No es asunto tuyo.
(It’s none of your business.)

Scenario 3: Talking about the weather

In the next scenario, the person of your dreams catches your eye on a bus or train, and you want to talk to them but don’t know how.

In this case, you should probably start with a classic line about the weather:

It’s not terribly exciting but will do nicely. Then you can ask them:

Scenario 4: Asking if you know them already

Another sneaky way to get someone talking in either situation is to go for the “Do I know you?” approach:

If you want to go really cheesy, and if they say “no,” you can reply with:

Debo haber soñado contigo entonces.
(Then I must have been dreaming of you.)

You can also check out this guide if want more pick-up lines.

How to Start a Spanish Conversation Online 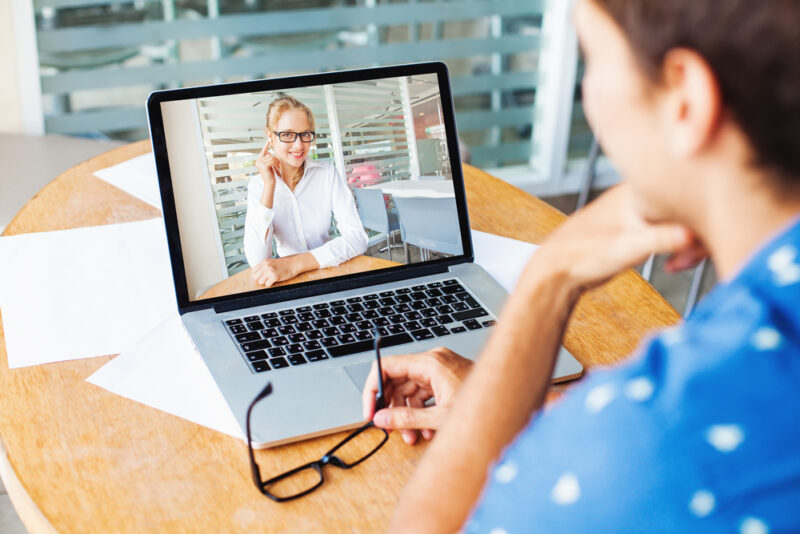 Let’s say that you decide to go the online route instead.

A note for you boys, who are generally expected to start conversations: Don’t use just ¡Hola! (Hello!) to start a conversation on Tinder or dating sites—say something specific!

This is a huge pet peeve of my Spanish-speaking amigas (friends) who are on such apps. Show you have something smart to say or something in common.

¡Parece que ya has visitado la mitad del mundo!
(It seems that you have already visited half of the world!)
¿Adónde quieres ir para el próximo viaje?
(Where are you going on your next trip?)

How to Keep the Spanish Conversation Going 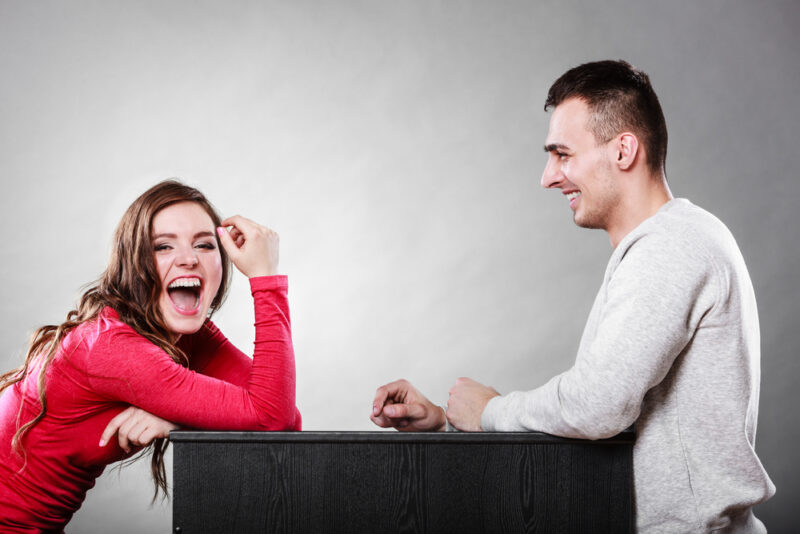 Once you’ve got the object of your affection talking, you’ll want to keep the conversation going by asking them all about themselves and winning them over with your wit and charm.

Again, if you don’t have natural wit or charm, you can blame this on the language barrier:

There are a few other possible phrases to get things moving. This one is a good way to get anyone talking:

¿Qué te gusta hacer en tu tiempo libre?
(What do you like doing in your free time?)

Once they tell you what they like doing, you can suggest doing the said activity together by asking:

¿Puedo acompañarte?
(Can I come with you?)

These can help you move things to the dance floor:

¿Sabes bailar?
(Do you know how to dance?)

¿Quieres bailar?
(Do you want to dance?)

If you’d like to try a more direct approach that’s straight to the point, you could say:

¿Te gustaría salir conmigo?
(Would you like to go out with me?)

¿Quieres subir a tomar un café conmigo?
(Would you like to come up for a coffee?)

Only use the last two if you’re in (a) a noisy place or (b) outside your apartment, respectively. Saying these while you’re having a romantic picnic in the park will only make you look weird.

How to Express Your Needs and Desire in Spanish 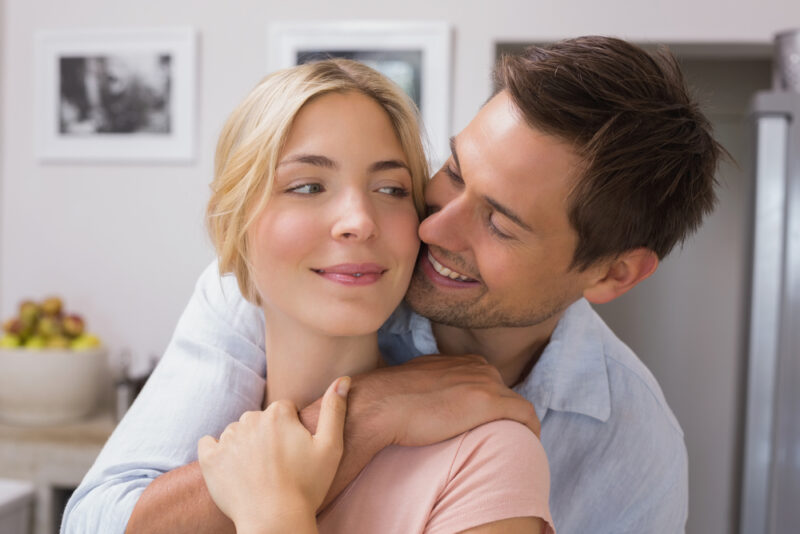 Another important caveat is that you should be clear about what you’re looking for (just as you should be in any other form of dating or meeting people) so as not to lead anyone on.

Here’s some vocabulary to help you be upfront about your intentions:

Busco algo sin compromiso.
(I’m looking for something with no strings attached.)

¿Quieres mostrarme tu ciudad?
(Do you want to show me around your city?)

Tomemos una copa y ya veremos.
(Let’s get a drink and we’ll see.)

Note that once things go beyond this point, you may find yourself in the position of having an actual Spanish conversation with a potential friend or lover.

How to Flirt in Spanish Using Compliments 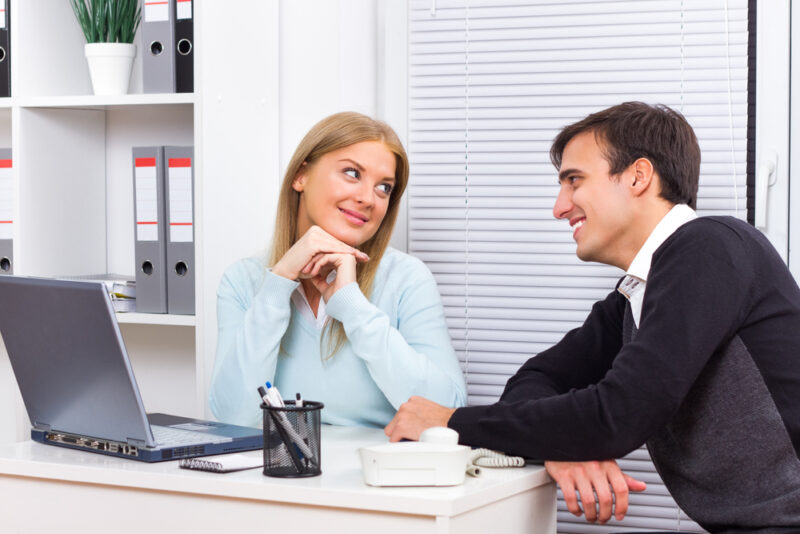 Showering your potential partner with compliments can up your chances of taking things to the next level.

Pop quiz! When your lovely date makes a grand appearance at the restaurant table, should you deliver the obligatory compliment with ser or estar?

The answer, of course, is estar!

That foxy devil already knows that they are (ser) a beautiful person in the more permanent sense, what they want to hear is that they are (estar) looking fabulous tonight!

How to say “you’re beautiful/handsome” largely depends on where your Spanish speaker is from.

Estás lindo/linda.
(You look beautiful — very much used in Latin America, but sounds a bit soap opera-y in Spain).

You can also go down the cheesy route and say:

Podría perderme en tus ojos.
(I could lose myself in your eyes.)

Me encantan tus ojos.
(I love your eyes.)

If you’re already serious, then you can say:

Note that it really does suggest love, and not “I want you” (even though the verb querer also means to want, and with a strongly suggestive tone you might be able to make this mean “I want you” in the more physical sense).

If you’d rather express carnal “wanting,” the two suggestions below will help:

Me excitas mucho.
(You turn me on.)

Hopefully, you were told to in some Spanish class be wary of the verb excitar, as it doesn’t indicate our (overused!) Anglo emotion of “to be excited.”

But now that you’ve met that sexy someone, you can finally use excitar.

How to Talk About Your Relationship in Spanish 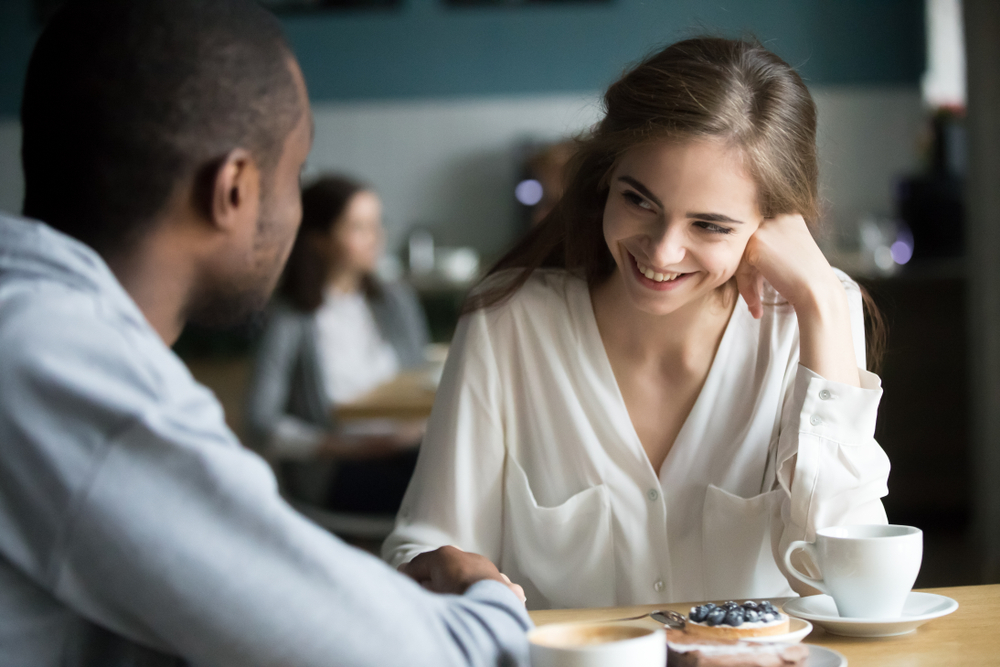 So things are moving along! Here’s how you can recount your romantic adventures to your buddies in Spanish.

Here the exact extent of the romantic activity is unclear but gets the point across:

Nos enrollamos.
(We hooked up — used in Spain)

If you have some other type of relationship status, you can use:

Salimos juntos.
(We’re going out together.)

Estamos casados.
(We’re married — it seems strange, but this info is delivered with that indicator of short-term states, estar!)

Somos amigovios.
(We’re friends with benefits, or kind of friends, but kind of dating.)

In Chile, there’s a system for recounting the “grade” of sexual activity you have achieved with someone, somewhat like the American allusion to baseball (“she got to second base last night!”).

Note that the stages are divided up differently, though (and remember, this is only for Chile):

Grado cuatro
(Grade four — some sort of hyperbole for kinky sex. Hilariously, Chileans themselves never seem to know quite what this means.)

How to Solve Dating Problems in Spanish 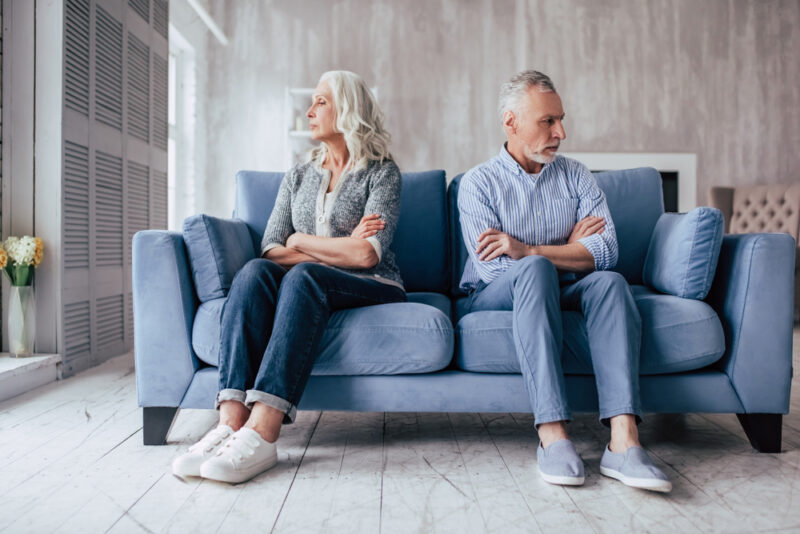 Even if you’ve done all of the above, potential problems can soon arise.

Maybe you went out for a while, but now things just aren’t working, or maybe you’ve realized you’re just too different and would rather just be friends.

Here’s what to do in the following scenarios.

Problem 1: Things are going too fast

You feel like the relationship is racing along at breakneck speed. You’ve already met the whole family, there’s talk of taking a trip together and it’s just all too much.

When they say to you:

Estaba pensando en ir a la playa por un par de días…
(I was thinking about going to the beach for a few days.)
¿a dónde vamos?
(Where shall we go?)

Yo estaba pensando que necesitamos espacio.
(I was thinking that we need space.)
¿Por qué no te vas sola/solo a [destination]?
(Why don’t you go on your own to [destination]?).

Problem 2: The spark just isn’t there

They can’t get enough of you, but you’re just not feeling it.

Me encanta estar contigo.
(I love being with you.)

Yo también, pero solo como amigos.
(Me too, but just as friends.)

Then run in the opposite direction (just kidding… kind of).

Problem 3: Your partner is a terrible dancer

Okay, so this one is maybe not such a big deal.

But it can be really embarrassing when you’re at a family wedding and your partner is dancing so wildly a space has cleared around them.

Plus, most of your family thought that speaking Spanish goes hand in hand with shaking your hips around so they can’t understand what’s happening (let’s be honest, you thought the same).

¿Por qué todos me están mirando?”
(Why is everyone looking at me?)

And then distract your partner with one of the above compliments.

Problem 4: You’d rather break up

Other break-up clichés that may come in handy include:

Necesitamos tomar un descanso.
We need to take a break.

How to Say Pet Names in Spanish

Have you moved through all the challenges? Snagged and wedded your Spanish-speaking lover? Congratulations, because now you never need to use his or her name again.

Here are just some of the ways to say “darling” in Spanish, listed along with some of their more literal meanings in English:

If you want to know how to naturally use these pet names, as well as the flirty words and phrases above, watch native speakers use them in context, with the help of subtitled Spanish-language movies and TV.

For example, the language learning program FluentU has authentic videos, such as movie clips and music videos, that come with interactive subtitles to help you understand the usage of romantic expressions and words. 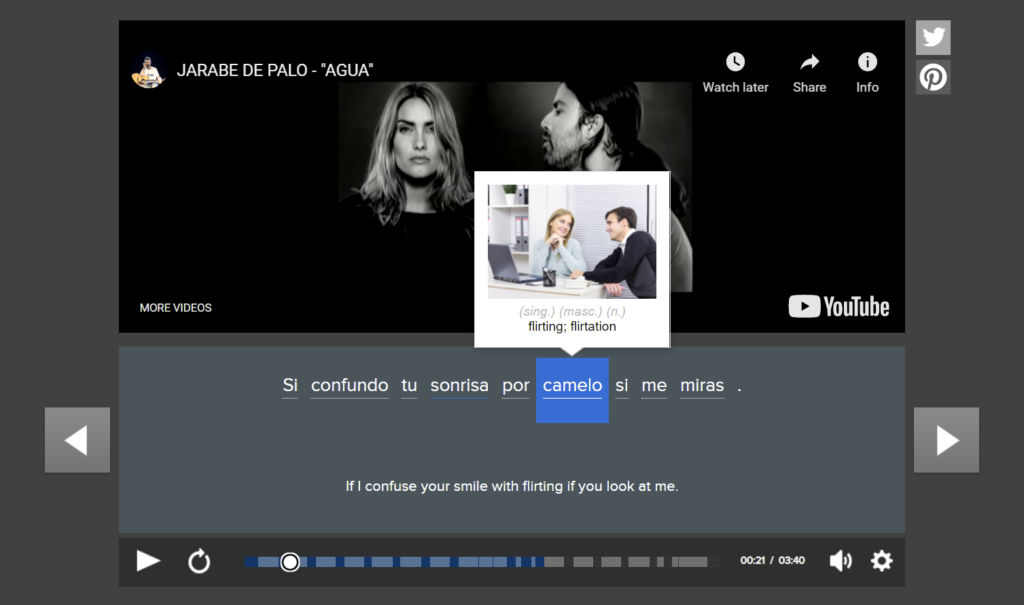 The program also includes multimedia flashcards and personalized quizzes for extra language practice, all accessible via browser and mobile (iOS and Android).

As you immerse yourself in Spanish as native speakers use it, you’ll learn more about Spanish flirting culture while simultaneously picking up new words to improve your chance at romance.

May you find sweet, lifelong love, or at the very least some fun, silly adventures worth dishing about in Spanish.