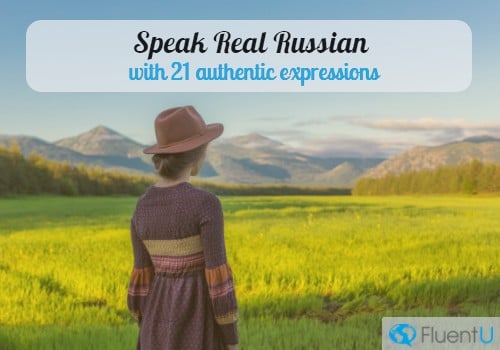 21 Russian Expressions for Adding Color to Your Conversation Skills

As Madonna famously sang in “Express Yourself,” don’t go for second best baby, put your love to the test.

Ok, so Madonna wasn’t singing about Russian, or any other language for that matter.

But her advice still rings true for language learners.

When it comes to mastering Russian, don’t limit yourself to beginner phrases or stock sayings. Mix in some authentic expressions. Learn how to respond to conversations the way Russians would. Pick up some (mild) expletives to really sound like a native.

We’ll show you 21 fun, colorful Russian expressions to put your language skills to the test. They’ll help you argue, exclaim and much more, all like a native Russian would.

There’s a lot to master in Russian already: the alphabet, the case system, verbs of motion… Why add expressions to the list? And what are “expressions,” anyway?

First things first, expressions are informal words or phrases that are used most commonly in spoken language. Expressions can include colloquialisms, sayings and slang. They’re different from idioms in that the meaning of an expression can usually be understood from the language itself, whereas idioms are almost always figurative.

“Good luck!” is an expression, while “break a leg!” is an idiom. Russian has lots of wonderful idioms—it’s worth picking some up along with the expressions listed below.

And why is it worth learning Russian expressions (or idioms)? Here are just three reasons for starters:

So if you’re ready to start picking up some Russian expressions, where do you go to learn them? In this day and age, the internet, of course.

What makes this resource so useful is that the videos come with captions you can click to get an in-context definition for any unfamiliar words and phrases. That means you’ll get essential exposure to authentic Russian while actively building your vocabulary. FluentU’s “Learn Mode” also provides fun exercises and flashcards that’ll help you retain what you’ve learned for the long-term.

Here are some basic Russian expressions to start off with. Try mixing these into conversation with your Russian classmates or friends. They’ll be impressed by your authentic speech!

Talk Among Yourselves: Expressions for Conversation

Conversations with native Russian speakers usually include more, well, conversational language than the average guidebook or beginner’s textbook provides. So to really understand what your Russian friends are saying, and to make yourself understood, it’s worth learning some basic conversational expressions. Here are a handful to get you started:

Russians use this to express disbelief and a little bit of awe. They might use it in a sentence like the following while shaking their head:

Misha went out clubbing at 10 p.m. last night and didn’t make it back until 10 this morning. Беспредел!

Literally, this expression means “yes no.”

But Russians use it to mean “not really,” with the same meaning as your response when your mom asked you, “Did you and your friends really sneak alcohol into the prom?” “Да нет, Mom, it was just a small flask…”

“Yes you what.” Your guess is as good as mine for where this expression came from, but it’s used to express surprise and disbelief, as in:

Maksim and I drank all the vodka last night.

Pro tip: The appropriate response to да ты что isn’t да я что (yes I what). I tried that with some Russian friends and just got blank stares in response.

Давай means “give,” but Russians have made it into a multipurpose word, using it as shorthand for “do it,” “let’s,” “go” and more.

Spend any time in Russia and you’ll hear it a lot.

Masha, you take the last piece of pickled herring. Давай!

Masha, should we take herring to the soccer game?

Or you might cheer on the star soccer player at the game:

This one literally means, “nothing to oneself.”

This saying expresses mild disbelief and/or interest with a twinge of envy, as in:

Sasha just got back from a three-week vacation in Greece.

Nightmare, horror. These are the filler words you use when your bestie is telling you about the latest drama with her on-again, off-again boyfriend. Accompanying head shakes and sympathetic clucks are optional.

“I kiss [you].” Close friends, usually women, will close a conversation with this sweet expression.

You can use it as a closing in written communications with friends, too.

I Object! Expressions for Agreeing and Disagreeing

Once you’ve got some basic conversational expressions under your belt, it’s time to add ways to agree and disagree with your conversation partners to the mix. These are pretty straightforward, but will improve your ability to hold forth with your Russian friends.

No, it’s the opposite.

Travel phrases are usually among the first sayings we learn, and with good reason. You do really need to know where the туалет (restroom) is, after all. Here are some additional expressions that are a little off the beaten path, but still used frequently in Russia.

“Sitting on the road.” This expression gets at one of many Russian superstitions—sitting quietly on your suitcase before leaving to guarantee a successful trip.

It’s a nice way to leave behind any lingering stress from packing and to get excited for the journey ahead.

This expression literally translates to “you’ll be…?” but means “do you want…?”

If you’re ever a guest in a Russian home, get ready to be asked this question in relation to food and drink over and over and over.

You get the picture.

Here’s the most authentic way to ask for directions, which even in the age of Google maps and smartphones you’ll need to do on the confusing Russian streets.

When stopping someone to ask for directions, first say Вы не подскажете (Won’t you give me a hint?) and then tell them where you need to go. For example:

Вы не подскажете how to get to the Belorusskaya metro station?

Even the most cynical Russians will be so impressed by your expression that they’ll probably stop and help you.

But don’t be too surprised to hear something like, “take this street for two blocks, turn left, cut through the courtyard and спросите дальше (ask farther, i.e., ask someone else once you’ve gotten that far).”

You’ll hear this on every crowded bus and metro car. Someone behind you will use this expression to ask, “are you getting off at the next (stop)?”

If the answer is no, move aside so the questioner can get closer to the exit. If the answer is yes, the person behind you is expecting you to make a hasty exit from the train or bus.

So repeat the ritual and ask the person ahead of you, “Вы выходите на следующей?” Then when the stop comes, everyone who’s getting off is packed near the exit and can pour off the train or bus quickly, only to be replaced by the waves of waiting passengers.

Russians will ask you this when you return from a journey, with the meaning, “How was your trip?”

No list of expressions would be complete without some naughty words. These aren’t real expletives—more like substitutes for the real thing. Think “goshdarnit” or “what the heck” instead of, well, you know.

Блины are tasty thin pancakes, similar to crepes. But блин on its own is similar to, “shoot!”

A modification of one of the more common Russian expletives, ё-моё is useful for expressing surprise with a side of anguish or despair.

Like when you find out the guy who hit your car doesn’t have insurance and you’ll have to pay $2,000 out-of-pocket for repairs. Ё-моё!

Тормозить means to brake, so тормоз refers to someone who just isn’t picking up what everyone else is putting down.

Now you’re ready to express yourself in Russian. No settling for second best among this crowd!


If you liked this post, something tells me that you'll love FluentU, the best way to learn Russian with real-world videos.

Russian Greetings for All Occasions: 18 Ways to Say Hey (and More)
13 Free Russian Learning Resources That Won’t Cost You One Thin Ruble!