7 Russian Alphabet Charts to Wake You Up to the Language

It’s easy to let your imagination drift away to future Russian travels.

The colorful domes of St. Basil’s Cathedral, Moscow in the dark, strolling through the Pushkin Museum.

But hey, wake up!

You’ve got to stop dreaming and get started on learning the language, right? And that means beginning with the absolute basics.

Learning the alphabet is unfortunately not always as easy as ABC.

When you’re teaching yourself Russian, learning the alphabet is one of the most important early steps.

After all, without knowing the alphabet, you won’t be able to sound out words or read Russian.

Even learning basic Russian requires a strong grasp of Cyrillic.

Thankfully, there’s a lot of support out there to help you master your АБВs. Russian alphabet apps, for example, can help you practice the unfamiliar letters.

But sometimes, it’s useful to go old school and get a Russian alphabet chart to study and refer back to.

Here are some terrific Russian alphabet charts for off-the-charts learning!

How to Get the Most Out of Your Russian Alphabet Chart

The more frequently you expose yourself to the letters, the less foreign they’ll look to you, so keep your Russian alphabet chart handy. Put it on your freezer so you see it every time you crave ice cream. Stick it to your bathroom mirror so you can gaze upon it as you brush your teeth. Not only will you expose yourself to the letters more, you’ll also have no trouble remembering to study.

Set aside a few moments to look at it every day until you have it down.

While it’s useful to look at the alphabet in passing, you’ll still want to set aside a few moments each day to study it. After all, it’s hard to practice fully when you’re focused on other things. You don’t need to spend too long, but go over the chart at least once every day until you’ve learned it thoroughly. Studying daily will help prevent you from forgetting letters in the time between study sessions, so you can keep pressing forward rather than needing to relearn what you’ve forgotten.

Say letters or letter sounds aloud as you look at the chart.

Saying the letter names and/or sounds aloud as you look at the chart will help you connect each letter with the sound it makes while also practicing your pronunciation. You might even try reciting the alphabet and then going back through and making each letter sound aloud to reinforce both letter names and sounds. 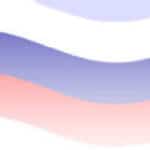 RussianLessons.net offers a handy free chart with each letter (capital and lowercase), the English equivalent, a description of its sound (using English words as examples) and a phonetic pronunciation of the Russian letter name. There’s also a second chart highlighting key variations between print and cursive letters. 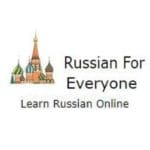 If you’re looking for a particularly comprehensive, free online alphabet chart, your search has ended.

Russian for Everyone offers all Russian students could hope for when studying the alphabet. It provides the Russian letter (uppercase and lowercase), audio pronunciation of that letter, a phonetic spelling of the letter name, an example of how it sounds in English and an example of a Russian word that includes that letter (with audio). Even more impressively, each letter comes along with a playable graphic of how to write the letter in cursive, and each Russian word offers a playable graphic of how to write the word in cursive.

Russian for Everyone even gives you an image to show you the layout of a Russian keyboard. If you decide to type in Russian on your computer, you might print it off for easy reference. 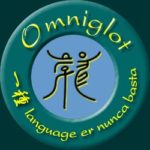 Omniglot offers not one, not two, but five separate free charts on the Russian alphabet.

One chart lists the Russian letters (in upper and lowercase) and gives the phonetic pronunciation of each letter name using Russian letters. The next chart focuses on how to pronounce each letter. The third chart focuses on cursive letters, sharing each letter in cursive, the letter name written in cursive and the equivalent English sound. The next two charts cover historic versions of the Russian alphabet, which are useful for anyone hoping to read historic texts.

Russian Language Learning Club offers free downloadable alphabet charts and audio explanation for those looking for a little extra instruction in the alphabet.

The first two charts divide up the Russian alphabet and break it down letter by letter, including each capital letter, a phonetic spelling of the letter name, examples using English words to show how the letter is pronounced, the English equivalent of the letter and whether or not the letter is a vowel.

The next chart offers a briefer, more condensed format that includes the upper and lowercase Russian letter, the name of the letter (using Russian letters) and the equivalent English letter.

Since the charts are fully printable, these might be great for wallpapering your favorite study space. The downloadable audio file will give you more detailed descriptions of the letters.

It might be designed for children, but that doesn’t mean you can’t use this purchasable chart for its maximum learning potential!

One side covers the English alphabet, but the other side has the good stuff—lots of Russian learning material. The chart includes the capital letter, a Russian word that uses that letter and an image to show what that word means. Plus, it’s bright and colorful—perfect for hanging on your wall!

If this product is unavailable, you can also check out this alternative Russian Alphabet Electronic Mat, which has native-Russian-recorded pronunciation and sounds so you can learn how each letter is written and pronounced.

I Know My ABC 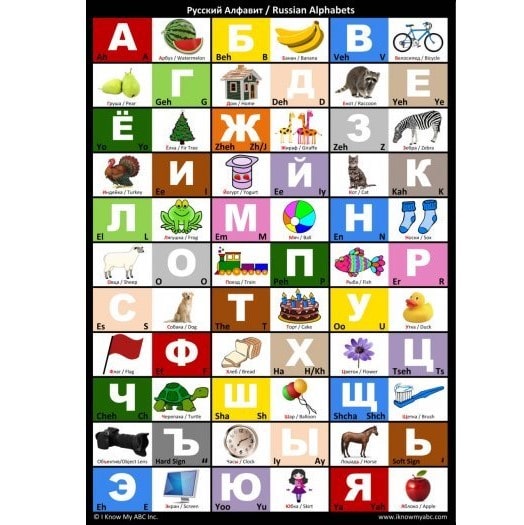 This colorful chart certainly would look good with any decor! After all, learning goes with everything.

The I Know My ABC chart features capital Russian letters, a phonetic pronunciation of each letter’s name, the English equivalent of the letter, a Russian word that uses the letter and an image to clarify the word’s meaning.

Plus, the chart is laminated. Perfect for any unexpected borscht spills! 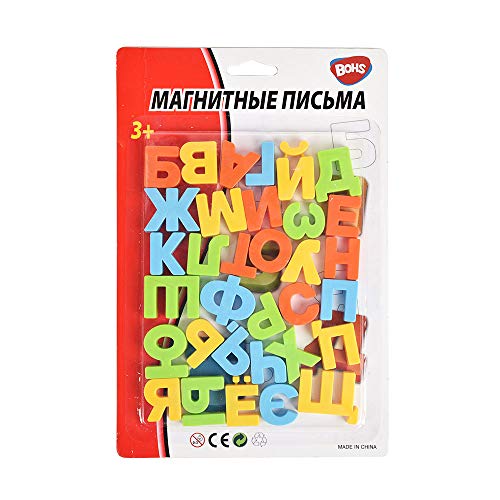 Okay, technically, this isn’t a chart, but that doesn’t make it any less awesome.

This collection of Russian alphabet fridge magnets can serve whatever purpose you want. Want to make them into a chart? Go ahead and organize them alphabetically. Want to spell out words you’re learning? They can do that, too.

All in all, these are a convenient way to keep the Russian alphabet at the front of your fridge (and therefore, your mind).

As you chart your path to learning the Russian alphabet, don’t hesitate to refer back to these helpful resources!