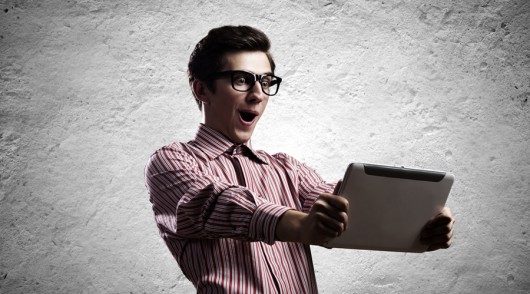 There’s an App for That? 6 Shockingly Good Apps for Learning German

Thanks to our technology, the world is constantly shrinking down to become an even smaller place.

This shrinkage is occurring because of the way technology is revolutionizing language learning.

We now have unlimited power to learn new languages and connect with other parts of the world using just a smartphone.

Want to be connected to authentic German language, history and culture at the tap of a screen?

There are loads of apps out there designed to help people learn a new language. German speakers of all levels, from beginners to seasoned veterans, can benefit from using these apps to improve their skills. But how can you pinpoint which apps are really going to help you succeed?

With everyone and their mother putting out apps these days, which are truly worth downloading?

Finding time to practice German can be difficult, but fortunately for us our smartphones are seldom out of reach. Instead of wasting time on Facebook, you could get to improving your German instead.

Reading, listening comprehension, speaking and vocabulary can all be improved using these apps in your spare time.

Here are the best of the best to get you on the right track.


There’s an App for That? 6 Shockingly Good Apps for Learning German

The videos are categorized into six skill levels, and every word is carefully annotated so that learners have plenty of support. Every word comes with an in-context definition, relevant image, audio pronunciation and multiple example sentences. You can even click on a word to see how it’s used in other videos across the site.

Perhaps the most interesting part of FluentU is its learn mode. The interactive subtitles, saved vocabulary lists and tailor-made flashcard decks will help you learn actively while watching your favorite videos, giving you an extra boost in German reading and listening practice.

Outside of interacting with a native German speaker, there’s no better way to immerse yourself in German language than with media. This is especially useful for those culture vultures that are already watching German cinema and listening to German music.

Der Spiegel is Germany’s most widely recognized news publication, rivaling The Guardian and The New York Times in credibility and quality. The app is updated multiple times a day and provides users with a glimpse into the political, cultural and economic aspects of daily German life, as well as offering push notification options to update you in real time.

Particularly useful for those with a basic vocabulary and understanding of grammar, Der Spiegel allows you to use the context of the article along with the words you already know to figure out words and phrases that you wouldn’t have otherwise understood. Not only does this help sharpen skills for picking out words in context and understanding words’ meanings independent of their English translations, but it can increase your confidence level tremendously after reading and understanding a relatively tough German news article.

Even just browsing through die Schlagzeilen (headlines) you’re sure to pick up a new, useful word or stumble across a fascinating story that might not have been reported on in your home country’s news.

This app is a surefire way to stay up to date on the latest news in Germany, as well as to practice your reading and translation skills. There are also audio files, video clips and pictures to round out this app, making it ganz Nötig (completely necessary) for anyone wanting to improve their German.

German-English translation apps are basically a dime a dozen. However, the one that’s most often recommended to me by professional educators is dict.cc.

Dict.cc offers users many advantages to other dictionary and translation apps. For one, the site is monitored for accuracy by many native and fluent speakers, giving it a level of accuracy and dependability not found in other translation apps.

Not only does the app provide German-English translations, it can also translate German to and from several other languages, making it useful for non-native English speakers as well.

But this app can do a lot more than just translate words. To ensure accuracy, dict.cc provides context with words that can have more than one translation, giving you a deeper understanding of how the word is used.

This app can be particularly useful for improving your vocabulary, even when you aren’t speaking with another person. Simply ask yourself the question, “Wie würde man ____ auf Deutsch sagen?” (How would one say ____ in German?).

If you don’t know the answer, look it up and commit it to memory. This can be great for improving your vocabulary regarding everyday activities, such as mowing the lawn (der Rasen mahen) or brushing your teeth (die Zahne putzen).

Dict.cc even comes with an offline version you can download, so when you’re out of range on your cellular data (or too stubborn to pay those high international data rates) you won’t be left high and dry with no way to translate unknown words.

There’s no way to get around it: The best way to improve your German is by interacting with a native speaker. Unfortunately for many people, native German speakers are relatively hard to come by, which is why an app like Couchsurfing can be such a blessing.

Couchsurfing is aimed at travelers looking for cheap (free) accommodation and an experience that can’t be found in a hotel room. Just as the name implies, it pairs hosts with travelers (surfers) looking for a couch to crash on for a night or two. It’s quickly becoming very popular, with over 5 million members worldwide.

For those traveling in Germany, this app is great for meeting locals that are open-minded and willing to show an Ausländer (foreigner) around their city. This results in a deeper experience while traveling, and allows surfers the opportunity to see a place through the eyes of a local.

In addition to an awesome experience, Couchsurfing provides an amazing opportunity to work on your conversational skills with a native speaker.

After an exciting day of sightseeing, it’s highly likely your host will offer to take you to the local Kneipe (bar) for a few beers. Take this opportunity to have a meaningful conversation with your host.

Most Germans are grateful for any attempt to use their language, and will be happy to assist you if you’re having trouble. At the very least, you’ll certainly improve your conversation skills, and who knows! You might just make a lifelong friend in the process.

With the exception of Australians, Germans are some of the most well-traveled people in the world. Chances are, there’ll be a German passing through your area that you could host, giving even those who don’t travel a chance to practice their conversation skills with a native speaker. With the app, users can publicly (or privately) post their itineraries to let hosts know their travel plans and make it even easier for hosts to find potential surfers, or vice versa.

A lot of people might have concerns about Couchsurfing, particularly in regards to whether it’s safe or not. Luckily, the service functions similarly to a social media website where users can rate hosts or travelers, resulting in a safe and friendly atmosphere that allows for an amazing cultural exchange. The app even offers instant messaging between users, so you can quickly arrange meetings or stay in touch with former surfers.

Internet streaming radio is quickly becoming the go-to source for music. While there are several apps that offer the service, the two most popular are Pandora and Spotify.

Pandora functions more like traditional radio, where users don’t have control over the specific track or artist being played. Spotify, on the other hand, allows users to pick which artists they listen to, even on the free version.

With a vast library, many German artists can be found on Spotify. Whether you’re into pop music or rap, German music has something for you and is a fantastic learning tool for any level.

There are plenty of new, useful phrases that can be picked up from music that aren’t found in your textbook. Slang, idioms and other colloquial expressions are inherent in any song, and paired with music and a catchy chorus, the phrases are super easy to remember!

You can even take it a step further and look up the lyrics to your favorite song (often times available directly through Spotify) to test your listening skills. Lyrics are great for translating a phrase that you don’t understand. You’ll probably even learn how to sing along after listening to any song enough times.

Spotify users can also build custom playlists to suit any listening preference, so be sure to check out what German music playlists are already floating around out there.

When I was just starting out, Slow German was my tool of choice for practicing listening and comprehension. Imagine my delight when I saw the service was now available as an app!

Slow German is just what it says it is: German, but slow!

This is great for beginners because it teaches listening and comprehension skills without the overwhelming quickness of native speech.

There are weekly podcasts of native speakers speaking in a slower than average rate. Also offering complete transcriptions of each podcast which can be downloaded directly to your phone as PDFs, Slow German is an excellent tool for anyone who wants to improve their listening skills.

The podcasts cover a wide variety of topics, from culture to fairy tales, meaning that there’s something to suit any listener’s interests. Recently updated for the iPhone 5, this app is very functional and immerses users in German without overwhelming them.

With this app you can practice on the go from virtually anywhere you have internet access. You can also download the podcasts to listen offline. There are varying levels of difficulty to suit any level of German, from beginner to advanced. Not only does this improve listening skills, it also adds to vocabulary by giving listeners a chance to pick up new words and go back to translate them.

The app also links users with Facebook, Twitter and other social media resources to make the experience as immersive as possible. And since all podcasts are spoken by native speakers, all pronunciation is accurate. This is really helpful for beginners still learning to make umlaut sounds and the like.

Downloading some (or all) of these apps is sure to improve your German skills. Reading, listening, speaking and vocabulary are all aspects of German that can truly never be perfected, so take any opportunity you have to improve in these areas.

Using readily available technology, you can sharpen up your German skills daily in fun and educational ways.

Most of us are glued to our Handy (cell phone) anyway, so why not use that mini computer in your pocket to improve your German?

Andy Batson is perpetually stricken with Wanderlust and is likely sitting at a café in Berlin or on the beach in Thailand right now. Find out where he’s at: abatson92@yahoo.com

How to Study German from Home: 10 Tips for Learning in Comfort
7 Compelling German Drama Series to Practice Your Deutsch