German Articles Made Simple: What They Are and How to Learn Them

Why does German have so many articles? No wonder you can’t remember them all!

In this article, I’ll tell you exactly how to learn German articles quickly and easily.

Some of you, particularly speakers of Russian, Japanese and Indonesian, will likely roll your eyes at the mention of articles. These languages get along just fine without them.

Well, it’s not the same in German. German articles, which are roughly the equivalent of the and a in English, go alongside nouns. They indicate whether you’re referring to a specific noun (the box) or an unspecified noun (a box).

Why are they only rough equivalents of the English articles the and a? Because German articles take many forms to indicate a lot more information about the structure of a sentence.

German articles are spelled differently in different cases. A noun’s case indicates its relationship to other words in the sentence, like whether it’s the subject or object of a sentence.

In our grammar charts below, you’ll see the four cases: nominative, accusative, dative and genitive.

Dartmouth College’s German Studies Department has a thorough rundown of each case. We’ll also show you plenty of example sentences below.

German articles also indicate the gender of the noun they’re referring to (which is almost entirely unrelated to human gender!). You can think of grammatical gender as being like word categories.

German has three grammatical genders: masculine, feminine and neuter. The rules for determining which nouns are in each category are very complex. Many of them simply have to be memorized.

German articles also change depending on whether the noun is singular or plural.

Definite articles are the equivalent of the.

Here’s what they look like in each case, for each gender.

Let’s have a look at some examples of these.

Ich gebe dem Lehrer den Apfel. (I give an apple to the teacher.)

The Indefinite Articles: Ein and Eine

Indefinite articles are the equivalent of a/an.

In German, the indefinite article can have various different forms, and like in English, there’s no plural form. When it’s used without an adjective, it takes on a form remarkably similar to the definite article.

Here are a couple of examples to illustrate that usage.

Easy! A singular, feminine noun in the nominative case.

What happens when we add an adjective?

In that case, the adjective must also be modified depending on the gender and case.

I’ll add the adjective gut (good) to the chart above to illustrate:

Now, there are additional rules about adjective declension (modifying a word for gender/case) that fall beyond the scope of this particular discussion.

The most important thing for you to learn right now is how to internalize the gender of each noun.

How to Remember German Articles

Why is it that Germans know this stuff and we don’t?

It just sounds right to them to say die Brücke (the bridge) instead of das Brücke, in the same way that English speakers think “change a diaper” sounds better than “switch a diaper.”

Native speakers simply don’t get confused about articles. By hearing, reading and speaking German every day for hours on end since childhood, they’ve absorbed these articles in a fundamental way.

Fortunately, there are a few ways to really nail German articles without that time commitment.

Any student of German will probably tell you that the single hardest part of speaking correctly is remembering which article goes with which noun based on its gender.

Perhaps even more so if they’re coming from a language like Italian or Russian, where a word’s gender is fairly predictable based on how it’s spelled.

It turns out though, that German word gender is predictable to an extent as well. You can get most of the way by knowing four things:

You can now guess the gender of the vast majority of German nouns!

The stricter you are with yourself when starting out, the better you’ll do memorizing German articles forever.

That means regularly checking yourself on the words you know and the words you’re learning. You can do this very simply.

If pencil and paper isn’t your thing, you can try an app like Der Die Das on Android or German Articles Buster on iOS.

It might sound like a real grind. But by applying yourself and really forcing yourself to make these things automatic in your speech and writing, you’ll save lots of time in the long run.

Once you can reliably produce the article for any given noun you know (putting you, to be honest, well above most German learners), you have to turn that into real language use.

Simply look at a bit of running text like a short article or a subtitled video. Then write down or otherwise point out to yourself the noun phrases. For example, take this line:

In einem deutschen Gasthaus würde man niemals einen Fernseher mit Basketball im Hintergrund sehen. (In a German restaurant one would never see a TV with basketball in the background.)

From this, we can easily parse out the phrases in einem deutschen Gasthaus, einen Fernseher sehen and in dem Hintergrund.

That means in the future when you want to say, for instance, “in a Mexican restaurant” you can simply switch the adjective while keeping the endings intact: in einem mexikanischen Gasthaus.

This way, you pick up and reinforce the adjective ending rules automatically! Again, this is more memorization but just think of it as a fast track to a native-level Sprachgefühl, or “language feeling.”

The more actual German content you read and listen to, the less you’ll have to consciously memorize these patterns.

One way to do this is by using a language learning program such as FluentU, which uses authentic video content, such as music videos and movie trailers, to help you learn in an immersive way. 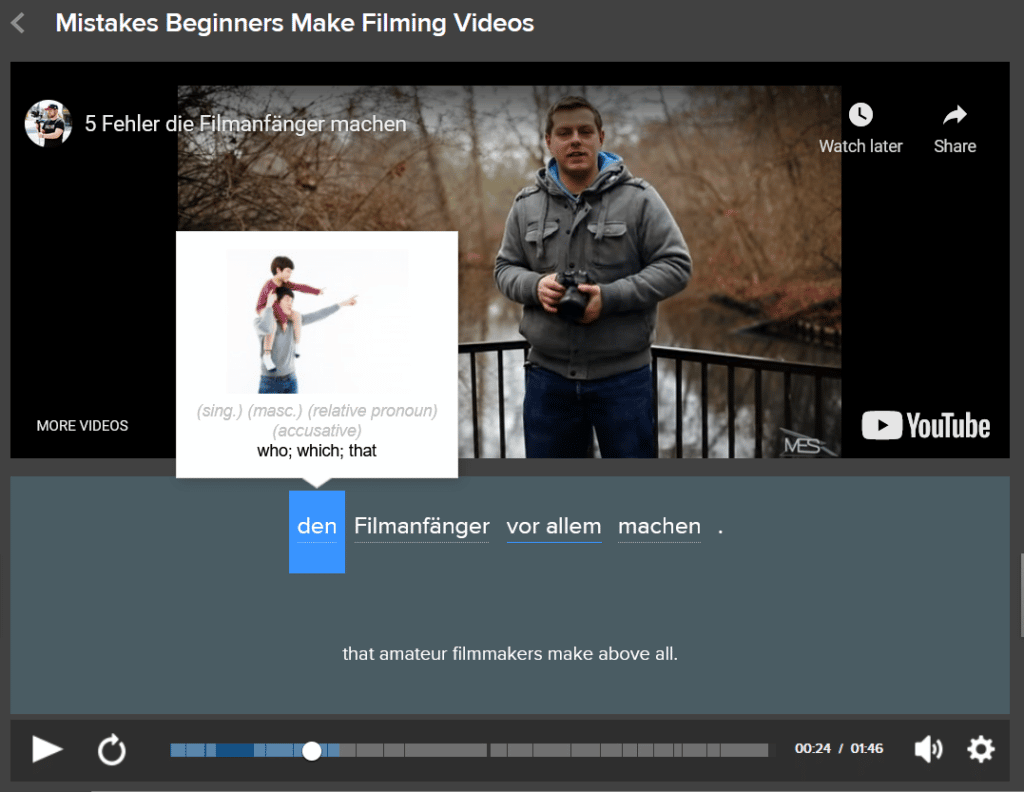 There are even additional features such as interactive subtitles and personalized quizzes that will save you lots of time by taking the guesswork out of the sentence meanings, so you can focus on the articles themselves.

So there you have it! Now you’re all set to waltz into a beer hall and confidently order a drink using the exact right German articles.