Sit, Stay and Speak! 15 German Dog Commands for Both You and Spot to Learn

Are you learning German and looking to learn and practice new German words with your dog?

If yes, then we have great news for you—and Rex or Fido, too!

In this post, we’ll show you exactly how you can learn German with dog commands and then teach you 15 of the most common commands.

Why Train Your Dog with German Dog Commands?

If you train your dog with German commands, you’ll be repeating the commands over and over, which will help you memorize German words, especially verbs, which you can use later at places other than the dog park.

German dog commands are also great for building up your grammar skills. Since commands are always given in the imperative, you’ll naturally practice this verb form while telling your dog to bleib (stay) or bring (fetch).

German dog commands are short and sweet and easy for dogs to understand, so both you and your dog will become bilingual with ease.

Plus, let’s face it: Training your dog with German dog commands sounds darn cool. Speaking Deutsch (German) to your dog will impress your friends, not to mention that cutie—canine or otherwise—out on a stroll!

Finally, many of the world’s most popular dog breeds come from Germany. German Shepards, Rottweilers, Doberman Pinchers, Schnauzers, Dachshunds, Great Danes and yes, even Poodles and Pomeranians among many others, all originally came from the country. If you have a German breed or mix, then why not be authentic and train them using German dog commands?

15 German Dog Commands to Learn Vocabulary with Your Pup

If you throw a ball for your dog and want him or her to bring it back to you, then the German dog command you need is bring. This word comes from the German verb bringen, which, you guessed it, means “bring,” or in this case “fetch,” in English.

Sure, your dog is usually a furry little angel, but for those rare times when they’re misbehaving in a doggie-like way by jumping onto you with their dirty little paws or not dropping that stick when you tell them to, then shout aus!

In German, Aus with a capital letter is a noun that means “finish” or “end.” It’s also a commonly used preposition that means “from,” as in “Mein Hund kommt aus Deutchland” (My dog comes from Germany) or “made of,” as in “Das Halsband meines Hundes ist aus Diamanten” (My dog’s collar is made of diamonds)—for those of you with a very spoiled pup!

When used as a dog command, its meaning is close to “down boy” or “knock it off.”

When your dog should stay put, use the German dog command bleib. This command comes from the German verb bleiben, which means “stay” or “remain.”

Fuß is a handy German dog command to use while working with your dog on his or her leash walking skills. Fuß is a noun that literally means “foot,” as in your pal should walk by or behind your feet, not charge ahead!

When you want your dog to come over and give you some love or come back if he or she has run off to greet another dog with a friendly sniff, then shout hier or komm. Luckily, these two are super close to their English counterparts both in meaning and pronunciation. Hier is an adverb that means “here,” and kommen is a verb that means “to come.”

Want to see your dog take off like a streak of lightning? Then teach him or her the German dog command lauf. Lauf comes from the German verb laufen, which means both “walk” and “run.”

What could be more adorable than a pup who barks on command? If you want your dog to speak auf Deutsch (in German), then learn the German dog command Gib Laut. Gib is the imperative version of the German verb geben (give), and Laut is a noun which means “sound.”

Ok, so you probably don’t want to go around encouraging your dog to bite people, but this dog command could still come in handy for German guard dog breeds. Fass can also be used for more harmless occasions, like when you want your pal to bite a stick for a good old game of doggie/owner tug of war. Fass is the imperative form of the German verb fassen (bite/grab).

When your dog is being bad—or obviously thinking about it—sometimes all you have to do is say a quick nein (no) to bring him or her back in line.

And what about those times when they’re determined to put something super gross in their mouth as though it were a piece of tasty candy? To prevent this all-too-common doggie grossness, teach your pooch the German command pfui, which is an interjection similar in meaning to “ugh” or “eww.”

To teach your dog this German command, just add a z to the end of the English verb “sit” to make sitz. Sitz comes from the German verb sitzen, which means, you guessed it, “sit.”

Want your dog to lie down for a Leckerli (treat)? Then teach him or her the German dog command Platz. Platz is a noun that means “square,” “space” or “seat,” so it’s not entirely clear why Germans use this word for dogs, although it’s probably short for Platz nehmen (take a seat). Whatever the reason, all good German dogs know that this means they should sich ablegen (lie down).

Need to quickly get your furry friend’s attention before, say, crossing the Straße (street)? Then train them with the German dog commands stopp and halt. Stopp and halt are both common German interjections for “stop.” The verb forms are stoppen and halten.

Looking to train your German-loving dog to search and rescue or maybe to just help you find your keys? In that case, train him or her with the German dog command such, which comes from the German verb suchen (search/look for).

Some dogs are trained to such for drugs, bombs and even trapped or missing people. Watch a German clip about one type of these working dogs on FluentU. 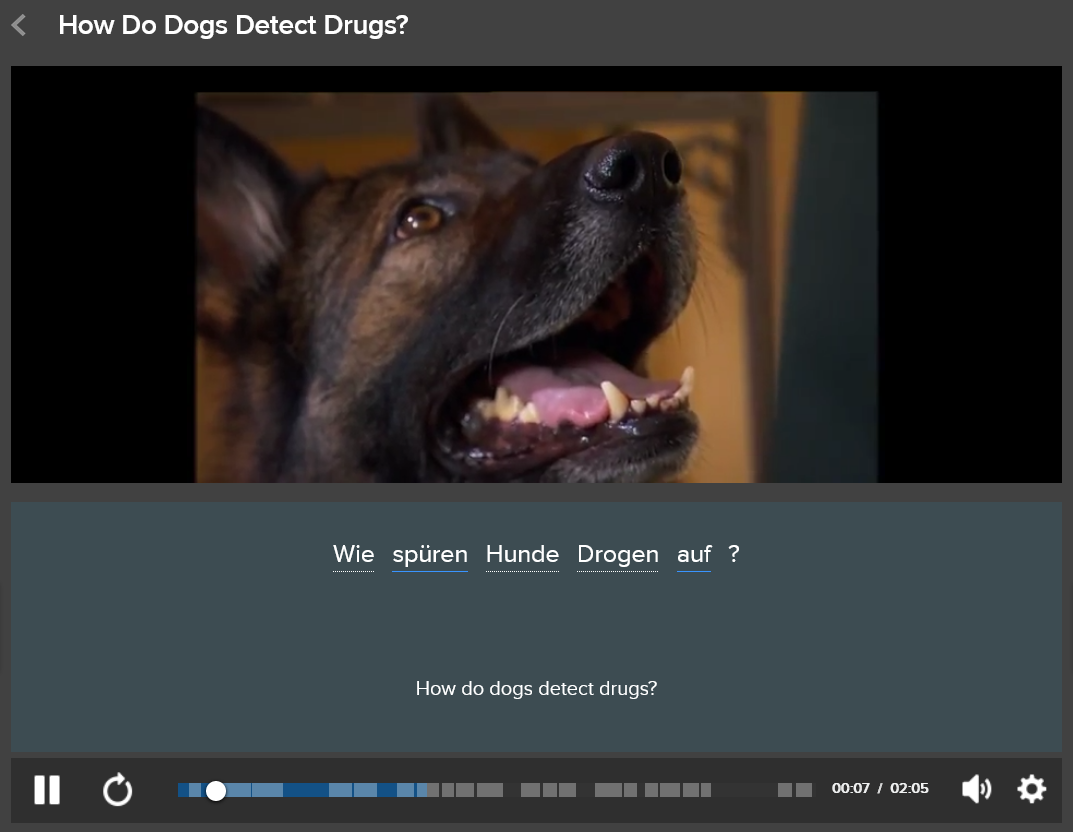 You can also hear examples of the other terms in his post on FluentU, or rather, the way you’d use them with human beings. The program has many authentic German videos—that is, videos that native German speakers actually watch, like movie clips, news segments and vlogs.

Save your favorite dog commands as flashcards on FluentU to review them with adaptive quizzes or see videos that use them naturally.

Pfötchen is the diminutive form of the word Pfote (paw), which means that the literal translation of this command is “Give me your little paw.” Awww, thanks, buddy!

After all that great training, don’t forget to give your furry friend plenty of Leckerlis (treats), not to mention a ton of praise—but in German of course! The German phrase for “good dog” is braver Hund, or you could go for braves Mädchen (good girl) or braver Junge (good boy).

Curious as to why the ending to the word brav (good/well-behaved) sometimes ends in -er and sometimes in -es? Don’t forget to go back and review the rules for German adjective endings!

And there you have it: 15 German dog commands you can use with your pooch. The next time you’re at the dog park, you’re sure to be the envy of every canine owner around!