Tout vs. Tous: All You Need to Know About “All” in French

“All” is a word we don’t give much thought to in everyday English, but it has different roles in French.

To express these ideas in French, however, you’ll need to know all about tout, its variants and its usages.

You’re going to want to express this idea all the time—so it is really important to start learning these words now.

Check out this essential guide to French’s tout, touts, tous, toute and toutes.

Tout vs. Tous: The Basics

First things first: What does tout mean? Well, as I’m sure you noticed, tout is one of the most common words in the French language, and it means “all” or “every.” In many instances, however, tout can be used to mean “very.”

That’s not all. Being one of the most common words in the French language, it has many variants that serve diverse purposes. One of those variants is tous.

But what are the differences between these words and what are these “diverse purposes” you’re blabbering on about, Michael? Let’s take a look. Below is a list of all the ways tout can be used in French, which we’ll then look at in detail, one by one, in this post.

Got it? Not quite, huh? Well, that’s okay. The following sections will get you all up to speed.

A note on pronunciation

While the pronunciations of tout and its variants are typically pretty predictable, they can change depending on whether a speaker is using a certain form as an adjective, adverb, noun, pronoun or fixed expression. I have you covered though: Each section has a handy pronunciation guide after its explanation.

You can also check the pronunciation and some contextual examples of each word on FluentU. When you search for a word, you’ll see videos that use the word, like movie clips, commercials, music videos and more. Since FluentU’s dictionary is contextual, you’ll be able to see the same word used in different situations and as different parts of speech, and not have to wonder which version is being used.

You can also save any word you want to flashcard decks of your creation, for review through personalized quizzes. These flashcards also have audio pronunciations of the word and example sentences (also with audio), as well as clips from other FluentU videos that use the word for even more context. 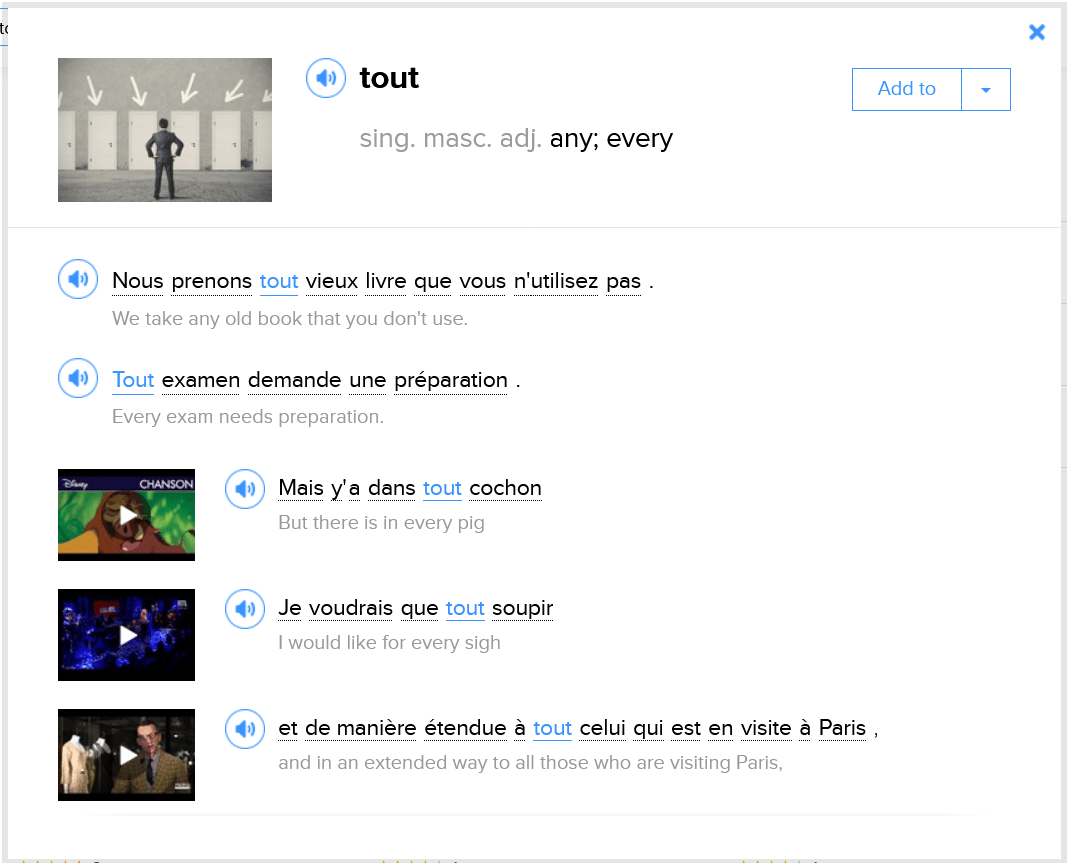 Tout vs. Tous: The 3 Main Uses of Tout (and Its Variants)

1. Tout as an Adjective

I know what you’re thinking: “Michael, you’ve done a lot of talking about tout and its supposed variants, but you haven’t actually shown me these variants!”

I apologize. Here they are.

As an adjective, tout has four forms. In fact, some of these forms appear when it acts as an adverb and pronouns (but not all—stayed tuned). As you might guess, the word tout is masculine and singular. That means it is used when it modifies masculine, singular words.

When modifying nouns, tout is unlike other adjectives because it is placed before the noun. For example, if you wanted to say “every child speaks French” in French, you would say “tout enfant parle français.” In fact, in almost all cases, tout and its variants are placed before the noun when it acts as an adjective.

Check out these examples:

Here tout is an adjective modifying the noun âge.

Here toute is acting alongside a definite article la (the), and it ends in -e because the word journée is feminine and singular.

Tu connais tous mes amis.
(You know all my friends.)

In this case, the word tous is alongside the possessive adjective mes (my), and it has been changed to tous from tout because amis (friends) is a masculine plural word.

Nous avons pensé à toutes ces idées.
(We have thought of all these ideas.)

The word toutes in this sentence comes before the demonstrative adjective ces (these) and ends in -es because idées is a feminine plural word.

Fixed Expressions with Tout as an Adjective

Pronouncing Tout as an Adjective

When tout and its variants are adjectives, their pronunciations are pretty predictable. Tout and tous are pronounced without sounding their final letters, and you can hear their pronunciation here. However, toute and toutes retain their second “t” sounds.

2. Tout as an Adverb

In the phrase, Il marche tout doucement, the word tout almost means “very,” and the phrase as a whole means “He walks very softly/quietly.” In this case, the word tout is acting as an adverb, as it is modifying the adverb doucement.

Adverb-ception, much? In this situation and others like it, tout is invariable. That means it won’t change form to tous, toute or toutes. Ever. It is just tout.

However, things are more complicated when the adverbial tout modifies an adjective. This might take some time for you to digest, so check out this handy breakdown:

Ils sont tout étonnés.
(They are all astonished.)

Fixed Expressions with Tout as an Adverb

Pronouncing Tout as an Adverb

When tout and its variants are adverbs, they are pronounced exactly like their adjectival forms. You can hear each word’s pronunciation by clicking on it here: tout, toute, toutes. Happy days!

3. Tout as a Noun or Pronoun

Are you ready? I’m about to blow your mind.

Tout, the noun: One form (ish). One pronunciation.

When tout is used as a noun, it is masculine and singular, meaning its form never changes. Further, it is pronounced without its final “t” to sound like this. For example:

Tu es mon tout.
(You are my everything.)

Easy, right? I promise, it doesn’t get much more complicated. Simply add an -s to this word to make it plural. For example:

Ce sont des touts que nous voulons diviser.
(These are wholes that we want to divide.)

Still not too bad? Well, I hope you enjoyed it.

As a pronoun, tout is a little more complicated, but only a little, I promise.

As a neutral pronoun (one that doesn’t really refer to anything in particular), the word tout is invariable and doesn’t change. This can be seen in the expressions c’est tout (that’s all) or malgré tout (despite everything).

The indefinite pronoun can also be found in proverbs like tout ce qui brille n’est pas or (All that glitters isn’t gold).

However, when the pronoun tout is actually referring to a preceding noun, it changes form only when it is plural. For example, a speaker would say “Tous sont ici” (Everyone is here) when asked “Où sont les enfants ?” (Where are the children?).

Fixed Expressions with Tout as a Noun and Pronoun

Pronouncing Tout as a Pronoun

When tout acts as a pronoun, it has perhaps the most different pronunciation than other forms of tout. While its pronunciations of tout and toutes do not change, the form tous is pronounced with the “s” sound intact.

A lot to take in, right? Well, why don’t you take a break? Check out the song “Tous les mêmes” by Belgian singer Stromae to see the word tout as a pronoun in action!

Did you understand it all? Make sure you check! Test your new knowledge of tout and tous here on About French. There are also quizzes on To Learn French, Le Point de FLE and Français Facile.

Keep your eyes and ears open for tout and its variants as you watch French TV, read online, browse social media, etc. Collect all of your tout examples in one place, and try categorizing each based on its use: adjective, adverb or noun/pronoun.

Until next time, I hope everything goes well!

…See what I did there?